Netanyahu throws liberals under the bus: How will they defend him now?

Now that he's been reelected, the Israeli prime minister has no reason to walk back his most extreme statements 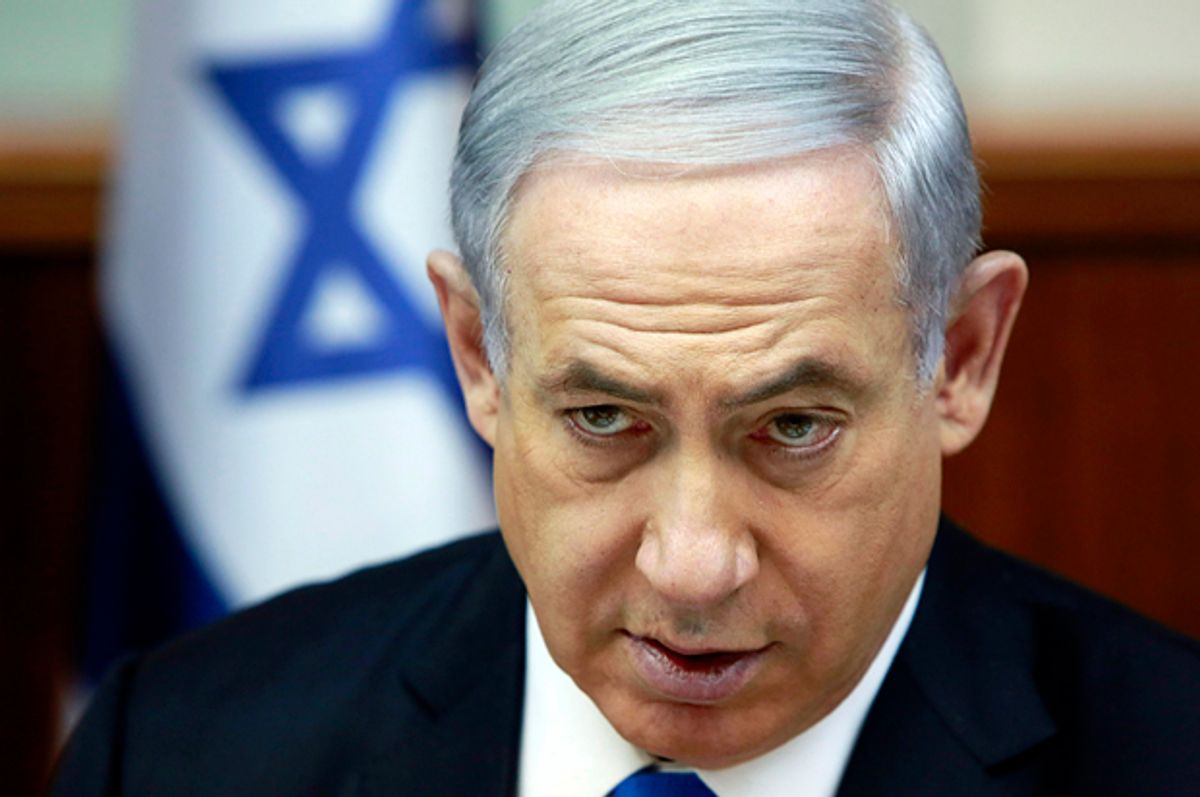 Right-wingers in Israel and worldwide will be celebrating Benjamin Netanyahu’s “miracle” come-from-behind victory for months to come.  But after the glow fades, the stark realities of what this victory actually means in the long term will be forced back into the public consciousness.

Seeing his chances of reelection fading as the polls were to open, Netanyahu made a bold and perhaps desperate move: He dared to expose to the world the lengths he would go to secure victory, even if it meant abandoning all pretense to democracy and diplomacy.  He had already started that process when he appeared before the U.S. Congress, using his speech there to both insult Obama openly and to use the Congress for an Israeli stump speech. Now, as the New York Times asserts, he went full out: “Many Israelis called it the ‘gevalt campaign,’ using a Yiddish expression for alarm. In the final days of a closely fought election race, Mr. Netanyahu threw all political and diplomatic niceties to the wind.”

Besides doubling down on his earlier pronouncement that the illegal Israeli occupation of Gaza and the West Bank was to be “permanent,” declaring that there would be no chance of a Palestinian state under his watch and thereby scuttling any idea of a two-state solution, Netanyahu felt entitled to attack the very principle of democracy, and doing so in racist terms, imagining “Arabs” as necessarily voting against “the true will of Israelis.”  Again, in the Times:

"Right-wing rule is in danger," he said. "Arab voters are streaming in huge quantities to the polling stations."

He said they were being bused to polling stations in droves by left-wing organizations in an effort that "distorts the true will of the Israelis in favor of the left, and grants excessive power to the radical Arab list," referring to the new alliance of Arab parties. Opponents accused him of baldfaced racism.

These pronouncements should not and must not be seen as merely the panicked, ill-thought-out statements of a politician grasping at straws.  They emanate from firmly held beliefs that previously were held in check by diplomatic and political niceties.  Now that he has been reelected, Netanyahu has no reason to walk them back.

We are now in a situation where liberals who wish to defend Israel have a lot to worry about. Netanyahu has in effect thrown them under the bus. How can they cling to the possibility of a “two-state solution” as a way to excuse their reluctance to hold Israel accountable for what Cornel West called, in Salon, a “vicious, ugly and brutal” occupation? How can they remain complicit with a “permanent occupation”?

The only avenue of escape that remains for these liberals is to pin their hopes on democracy in Israel, and to deflect attention away from Netanyahu’s racist and anti-democratic fear-mongering (spreading alarm about the fact that Israeli Arabs were actually, god forbid, voting) and toward the gains of the Arab block.

The New York Times notes that

“the head of the Joint List, Ayman Odeh, sees an achievement in getting this far in Israeli politics.

‘There is no Arab in this country who imagined that we would be the third force,’ said Mr. Odeh, who only weeks ago was a little-known municipal counselor from Haifa, a mixed Arab-Jewish city in northern Israel.

Some see this election as a beginning in Israeli politics, in which the Arab alliance will become an active opposition. ‘At the very least, the large turnout gave Arabs more weight to promote their community,’ said the Mossawa Center director, Mr. Farah."

We should not ignore this modest moment, but neither should we inflate its import. We cannot imagine that voting in Israel takes place under the same conditions that pertain in the United States. We have to see the gains of the Joint List in the context of the Israeli political system. Once we do, we see that the participation of Palestinians in the vote is not dissimilar to what American blacks faced in the past, and, with the Supreme Court’s erosion of the Voting Rights Act, increasingly face once again.

We must pay attention to these data presented by the Institute for Middle East Understanding:

Liberals defending Israel now have to contend with a new set of challenges, and if they still refuse to endorse the Boycott, Divestment, and Sanctions movement, they need to come up with positive, proactive proposals of their own.  And to say they will engage in “dialogue,” which has not yielded anything better that a reinvigorated right-wing government in Israel, only shows the bankruptcy of that liberal position.