Starbucks is a national joke: Why its #RaceTogether campaign is so "self-righteous" 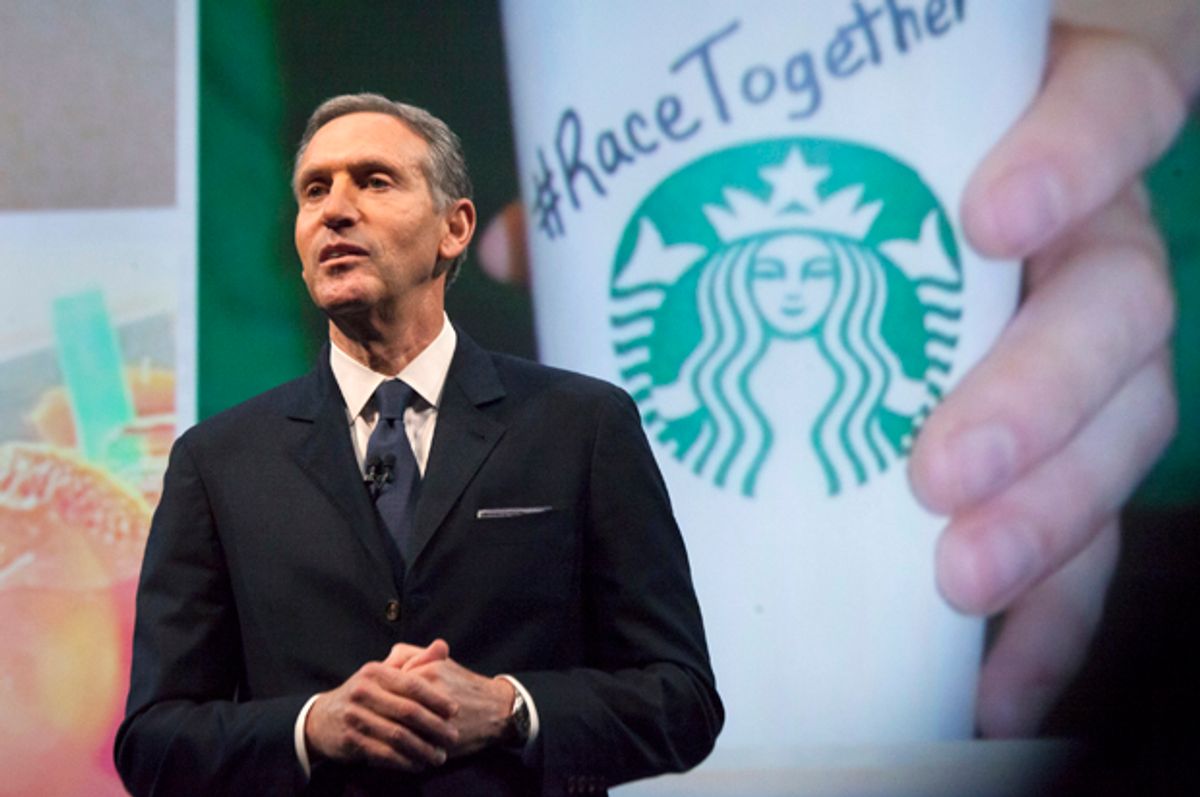 As you probably know by now, Howard Schultz, the chairman and CEO of the phenomenally successful Starbucks Corp., thinks it's about time you and your favorite barista got serious and solved this whole racism thing once and for all. Actually, that's not quite fair; because according to Starbucks' official release about the initiative, which they're calling "Race Together" (or #RaceTogether, if you're on Twitter), the point is not to fix racism but rather to "create a more empathetic and inclusive society – one conversation at a time." Whatever that means.

In the grand scheme of things, of course, Starbucks' weird new publicity stunt isn't such a big deal — in fact, it's not even the first time they've done something like this (remember "#ComeTogether"?). Nevertheless, Starbucks is one of the defining brands and aesthetics of our time, so it struck us as worthwhile to see if we couldn't tease out some greater meaning from the silliness. So earlier this week, we got University of Pennsylvania political science professor Adolph Reed — who recently penned a much-discussed essay for Harper's about the hollowness of the contemporary American left — on the phone to talk about #RaceTogether and what it might tell us about how the American mainstream thinks about race issues today. Our conversation is below and has been edited for clarity and length.

When I first read about this #RaceTogether thing, I thought it was a joke. It's like something from ClickHole. But as seemingly weird as it is, I wonder, is it really coming out of nowhere? Or is it actually in keeping with how the "conversation" about race has been happening for a while — but especially in the Obama years?

It took me a while even to process what this initiative is supposed to mean and how it's supposed to proceed. So the barista's supposed to open the conversation by suggesting a racially appropriate drink, or what?

But I think you're right; it's not completely off-the-wall. In a way, I think this may reflect a facet of the triumph of a way of thinking about race that's appropriate to neoliberalism, in the sense that it's disconnected from concerns about hierarchy and from concerns about economic inequality.

In that sense, the ideal of diversity is an expression equivalent to neoliberal individualism in how we've come to think about race and social justice — the triumph of recognition over redistribution, the triumph of celebration over compensation; it's all that kind of stuff.

So to take a step back for a moment, how is the way race is treated in a neoliberal era different from how it was, say, 40 years ago?

There is a funny way that groups are reified as individuals and that individuals who are held to embody group classifications can stand in for a group. All of the folderol over what Obama's being the first black president means is, I think, embedded in vague and internally contradictory ideology. That is to say, the success of a putatively representative individual can be taken through synecdoche, basically, as a triumph for an entire group. That works only if the understanding of the group is such that it's reduced to one characteristic, which is its group-ness...

The argument has been that markets function to sort people into social slots justly, and that discrimination is bad because it interferes with the work of the markets — which are basically treated as nature. In that sense, pursuit of diversity or abstract consciousness of the patterns of racial difference and togetherness also has the salubrious effect of locating a discussion of inequality safely outside the realm of economics.

Along the same non-economic lines as "race relations" is the term I used just now — the need to "have a conversation" about race. At this point, in all honesty, I don't even know what that means anymore. Why do you think that phrase is so prevalent? Is it because it is so removed from structural and economic subjects?

I'm with you on that one. When I first heard it — which was in the '90s, when Bill Clinton started to talk about it — it never made any sense to me. When you think about it, a conversation goes on between individuals or individuals as parts of groups.

The phrase betrays a couple of things: one of them is this facile notion that the group-ness of these totally artificial groups confers a discrete consciousness and perspective onto any one of the members. The other is that it's only the really smart people, who go off to Martha's Vineyard or wherever, who get to have a sustained conversation about what to do with the rest of us. I think those are the only frameworks in which the conversation idea makes sense; that or some dumb stuff you see on television.

I think the notion has absolutely no coherent or clear meaning ... I've been baffled over what it is about the phrase that seems to give so many people a sense of meaning and significance when there's clearly nothing there. I think there's a discursive tendency that seems almost militantly focused on establishing and policing public discussions about inequality to keep them away from notions of economic justice and to funnel them into these essentialized groupist discourses.

Another weird element to the #RaceTogether project, I thought, was the way it tried to increase (and outsource) a kind of emotional labor onto the Starbucks staff. According to Fortune, about 40 percent of Starbucks' workforce is comprised of racial minorities; so now in many places not only are Starbucks workers going to have to pretend they enjoy handling long lines of grumpy people who just want their coffee, but they're also going to have to do the work of talking about race to assuage the guilt — I guess? — of their customers, many of whom are white.

I think that's a very good point. In fact, I mentioned to a trade union activist friend of mine that I was going to be talking to you today, and I sent him the link to [the Starbucks announcement], stuff and his immediate response was, Why doesn't Starbucks encourage a conversation about wages, health care benefits, or working conditions? I wish I could say that I find this particular kind of self-righteousness and myopia to class inequality astounding, but it's been around for too long now. I find it the equivalent of astounding in the brazenness of the oversight.

What's also odd is that the phrase is #RaceTogether, which implies some sort of communal endeavor. Yet, as we've discussed, the whole mind-set is profoundly individualistic. How do you think about that tension?

In part, I think it's an illustration of something I find especially creepy.

I'm feeling more and more that people in this society are becoming less and less capable of recognizing the distinction between individuals and larger entities. If you have trouble recognizing a distinction between Self and a larger Other, the patter just seems to make sense ... because the various words and phrases kind of strike affective chords in your head that make you feel good. But they don't have to add up to anything. I often compare the inflation of the notion of politics to the inflation of the Deutschmark in the Weimar Republic. If it can be everything, it's not anything, right? It doesn't give you purchase on anything.

The notion of collective action has just vanished; the notion of politics as a strategic activity directed towards influencing power has vanished; the lines between self-expression and purposive action in and on the world has just vanished. I know this sounds like an old man's rant — and I guess it is — but I think that's where we are. I think that tension between individualized acts and the #RaceTogether tag don't seem to trouble anybody because they just don't notice the contradiction.