The magic of the CW is real: The network's supernatural success is changing the future of TV 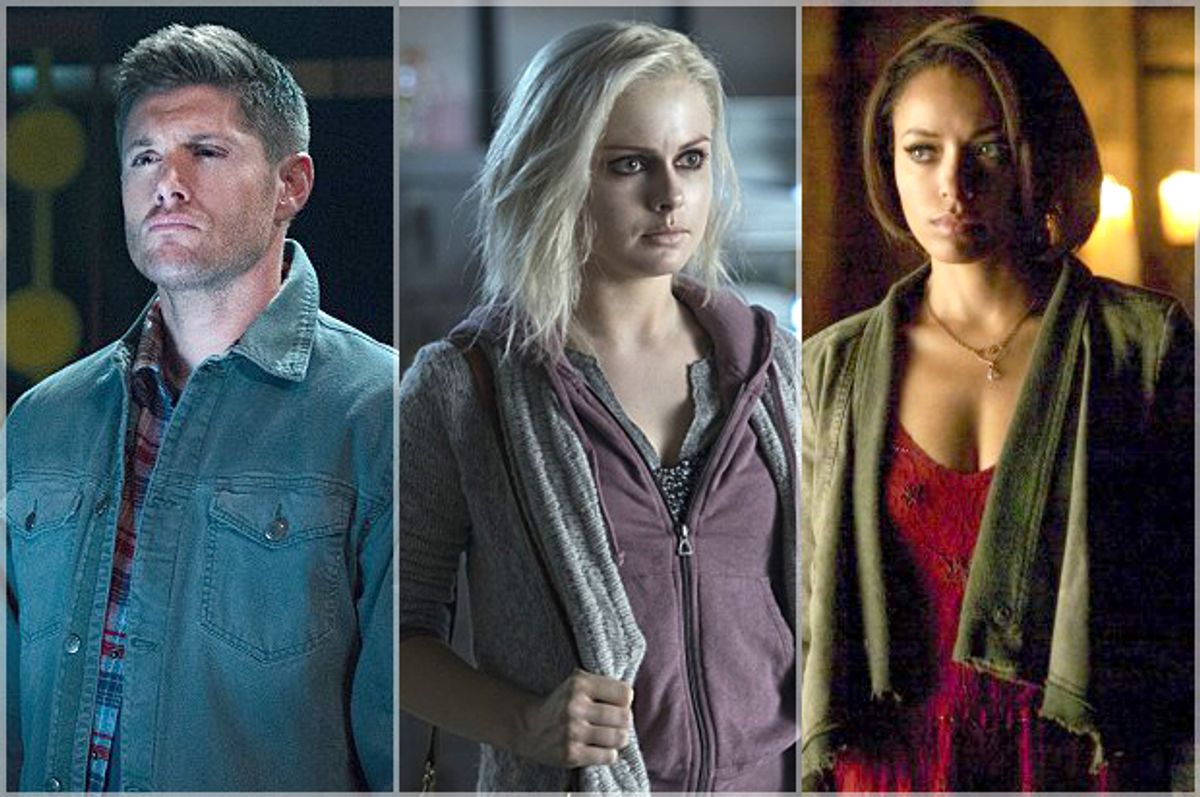 Rose McIver in "iZombie," Jensen Ackles in "Supernatural," Kat Graham in "The Vampire Diaries" (The CW)
--

“iZombie” is, unexpectedly, adorable. The show is a procedural by way of teen drama, with a hint of the horrifically supernatural thrown in—a premise that sounds like it was produced by South Park’s plot manatees. The pilot’s opening scene reads like “Grey’s Anatomy,” as protagonist Olivia Woode (Rose McIver) runs down a hallway with a stretcher and saves a patient’s life; within minutes, it’s borrowing from “Bones,” engaging in snappy banter over corpses in a morgue. Liv’s family and relationship drama refers effortlessly to teen soaps like “Pretty Little Liars” and “The O.C.”—the cute guy she loves, who loves her back, can’t be with her, because plot—and the transition from morgue banter to detective banter proceeds about as easily as it does in boilerplate standby “Law And Order.” It’s almost too much for this little show to handle—but under the practiced hand of co-developer Rob Thomas, best known for creating the cult classic “Veronica Mars,” it’s held together with dry wit and the charisma of Olivia herself, who also narrates the show.

And yes: Because this is a CW show, she’s also a zombie.

The horror element of the show is where the punny, tongue-in-cheek title comes from—and it’s a type of horror that less scary than funny, the kind of zombie story told by “Shaun Of The Dead.” Except with “iZombie,” our hero is a smart, beautiful young woman embittered by trauma—a teen show’s staple, then, with a genre twist. This is a formula that has become the CW’s brand, whether that genre is vampire flick (“The Vampire Diaries”), telenovela (“Jane The Virgin”), or costume drama (“Reign”). It’s a formula The CW can trace back to “Buffy The Vampire Slayer” (which ran on both the WB and UPN, the two smaller networks that merged to create the CW). And as genre storytelling, in almost every medium, has come out of hiding in the past several years, it’s a formula that the network has come to rely on.

Just a few years ago, in 2012—the same year that CW president Mark Pedowitz disclosed how much of the network’s revenue was coming from a lucrative licensing deal with Netflix—the Hollywood Reporter wrote that the CW barely seemed able to keep the lights on. Two debut shows that season, “Ringer” and “L.A. Complex,” both struggled to find audiences. (“Ringer” was about a woman being stalked by a woman who looked exactly like her; “L.A. Complex” was about a bunch of young people trying to make it in Hollywood.) The article’s writer, critic Tim Goodman, wrote: “It might be true that more people in the session seemed to want to know what was happening with the storylines on Vampire Diaries, but a lot of others were scratching their heads about how exactly The CW was justifying its existence.”

This season, the story is very different. In the intervening few years, the CW has bolstered its reliable “The Vampire Diaries” and “Supernatural,” added two more hits to the lineup (“Arrow” and spinoff “The Flash,” both based in the DC comics universe). Besides the ratings successes, there’s the critical appeal: “The 100” is a critical darling, and “Jane The Virgin”’s lead Gina Rodriguez won the network its first Golden Globe ever. Special powers, supernatural weapons, undead romances, demon possession, and virgin births occupy most of the CW’s primetime programming. Even if we were to more strictly define “genre” as just science-fiction or fantasy, some form of magic or future science motivates the majority of the CW’s storytelling. And clearly, the infusion of genre is working.

Given that the network is consciously skewed to younger audiences—audiences who are more likely to watch their favorite shows on streaming platforms, audiences that are more likely to become gif-making, fic-writing Tumblr fans—the CW has a license to be more playful with its programming. It can go for campy fun, such as “Reign,” or unironically deliver a superhero story, as with “The Flash.” (It can even string along its fans for several seasons of will-they/won’t-they bromance, as with “Supernatural.”)

But at the same time, this may just not be playfulness and irreverence—this may the shape of things to come. Despite lower ratings than the other networks— strong ratings for a CW show are roughly equivalent to weak ratings for a CBS/ABC/NBC/Fox show—the CW is making television for the generation of future tastemakers. And if the last decade or two have seen genre storytelling taken out of the proverbial closet and onto HBO, maybe in the future, the non-magical world will become a niche interest.