We don't watch "Empire" for the plot: It's the unabashed spectacle of wealth and style that keeps us hooked

In last night's finale, the Lyons continued to revel in the show's signature conspicuous and coded opulence 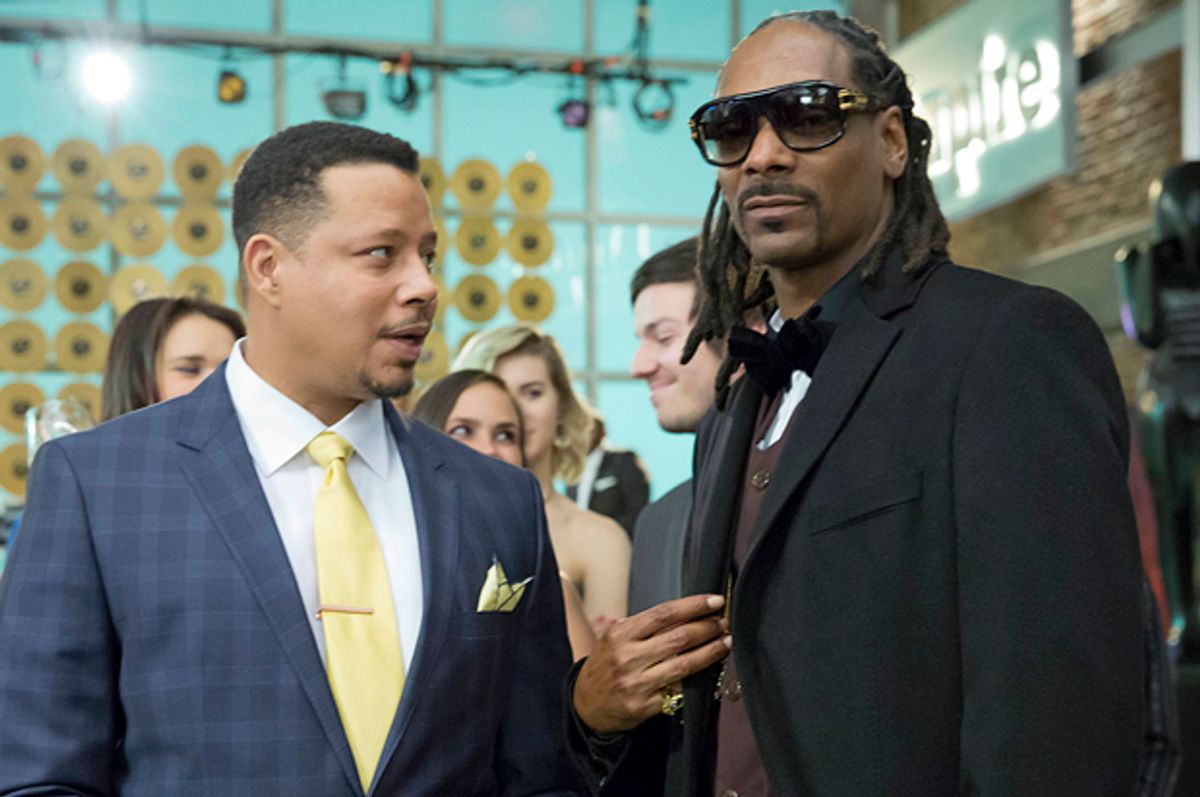 Some stuff happened on last night’s two-hour “Empire” season finale. Who cares? As always, the reason I’m watching is the spectacle. Last night I found myself continually losing the thread of the plot to focus on a particular fur coat of Cookie’s, or the specific paisley print on Lucious’ pocket square. If it wasn’t fashion, it was the opulence of the sets (Hakim’s bathroom, done fully in Carrera marble, complete with drop-in Jacuzzi) or the ornate objets d’art that are the characters’ props (the intricately carved lion-themed presents Lucious buys for his three sons). Did you see Cookie’s necklace in the final episode—a necklace so ostentatiously big the pendant looked less like jewelry and more like a mirrored necktie? Or the massive Kehinde Wiley portrait in the Empire Records offices? Pop culture has always been enamored with things; “Empire,” a work of pop culture about the inner workings of another medium of pop culture, is outright obsessed with them.

Obsessed, almost to the point of bad taste—“taste,” of course, being a subjective, coded value that’s easily redefined to benefit the ruling classes. “Empire” flagrantly opts for ostentation over restraint, and besides just looking good, the show’s sumptuousness is a show of power. The Lyon family is wielding their wealth in a specific, coded way, not just at other characters in the show but at us, the viewer. The characters embody an expression of wealth and style that directly counter some of the most holier-than-thou criticisms of hip-hop culture, in particular—the “suspicious” phenomenon of “shopping while black,” the racial component of conspicuous consumption. “Empire” is shamelessly, decadently luxe—in last night’s two-part finale, Cookie (Taraji P. Henson) has sex on a bearskin rug—and that is, itself, a fabulous, powerful statement.

Black people do buy 28 percent more conspicuous luxury items than consumers of other races—which, as Ray Fisman in Slate observed in 2008, reflects the specific form of status markers that exist in the black community. Obviously, not all that long ago, black people presumably bought a very, very small percentage of conspicuous luxury items. So the freewheeling dissipation of spending takes up a lot of space in the output of black musicians, from artists as varied as Jay Z and Beyonce in “Upgrade U,” Lil Wayne’s “Got Money,” or Nelly’s “Ride Wit Me.” Rolexes, Hermés scarves, and Range Rovers; as Nelly raps, “Damn shit done changed now / Runnin’ credit checks with no shame now.” Indeed, flashy spending has become such a staple of pop music that it’s prominently featured in songs that are only peripherally connected to either black musicians or historically black musical genres: Fergie’s “Glamorous” and Far East Movement’s “Like A G6,” for example.

And nowhere is this fantasy of wealth more celebrated than the music video, that weird hybrid art form that tends to become an opportunity for a pop artist to dick around in someone’s mansion for a day’s shoot while lip-syncing to their terrible song. Hence Taylor Swift’s “Blank Space,” a fantasy of aristocratic living, or 50 Cent’s “I Got Money,” filmed almost farcically with a bunch of hot women around very expensive sports cars. The music video is a fantastical, unreal space without much story or premise; it’s a mood piece where wealth is possible, status is achievable, and “good taste” doesn’t exist.

“Empire” is a TV show heavily influenced by music; it’s a TV show that, more than most, gets to be a splashy, unrealistic music video. The sets are ridiculously lush, the fashion is hilariously improbable, and the location is unspecific and glamorous. And it is a show about black musicians making black music—rap, hip-hop, R&B, even some gospel, in the last few episodes. The lushness—echoing Lucious’ name, even—is part of the scenery, inhabiting not just hip-hop culture but the inherent criticisms of it, too. “Empire” is shamelessly soapy, unapologetically splashy, decadently rich, and it feels like an act of triumph.

In the intervening weeks between “Empire”’s premiere and today, the Fox show has become a rare, unequivocal hit in an era for television that otherwise just doesn’t produce ratings giants. As Vulture’s Joe Adalian observes in his excellent analysis, “Empire”’s ratings grew every week for the first ten weeks—a phenomenon so unlikely these days that it is basically unheard of. He points out that the show succeeds because it is a huge, grandiose soap opera, in the mold of “Dallas” or “Dynasty.” Those shows were about big, conniving families with a lot of money and power. The Lyons are a family with wealth and status, and a complicated, fraught relationship to both. Much has been said about how amazing it is to see a black family occupy one of the highest rated shows of the year; but the most important thing is that with their particular relationship to money, power, and history, black families, too, can make for excellent drama.