Your microwave dinner is making you obese: What the food industry doesn't want you to know 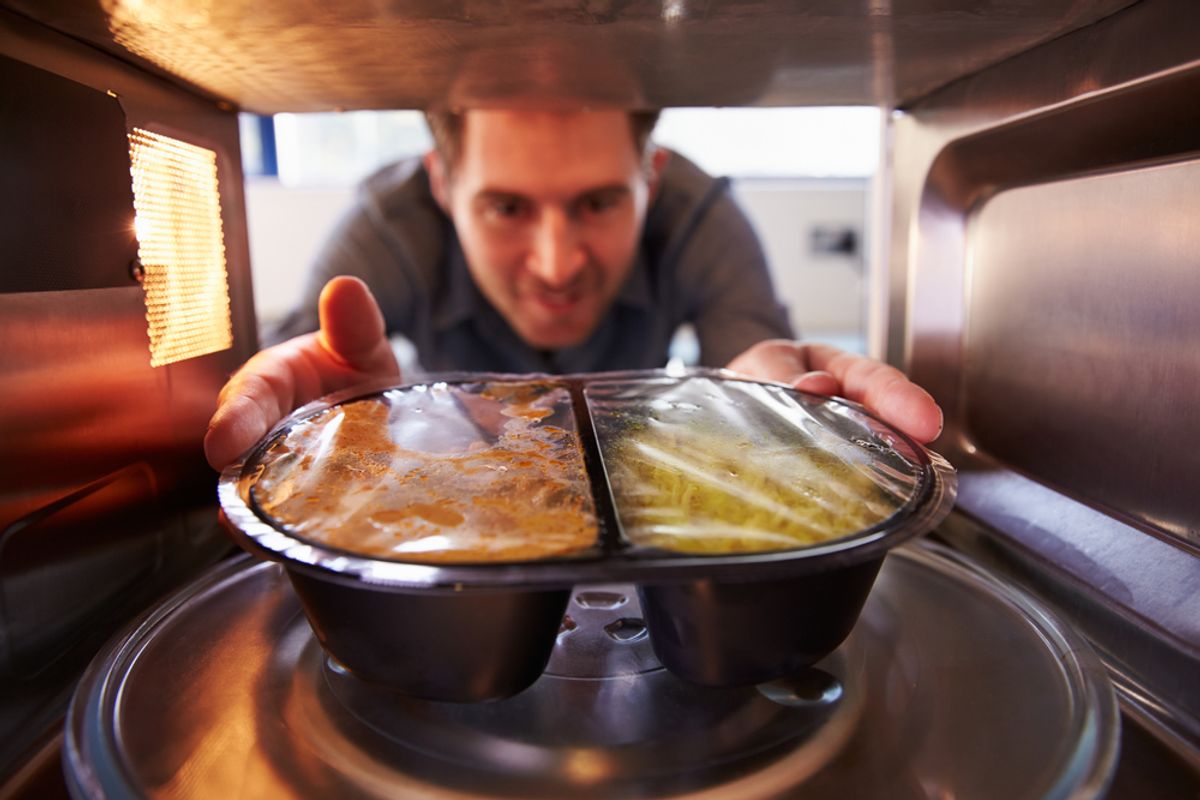 Processed foods are suspected of causing a variety of heath issues. Foods high in sugar and refined carbohydrates, for example, are known to cause high blood sugar and obesity. But recent research has uncovered an entirely new mechanism by which many metabolic disorders can be triggered. Certain additives that are commonly used in processed foods are being shown to impact health, at least in mice, by altering the body’s population of bacteria that live in the gut. Collectively referred to the microbiome, the importance of this bacterial community of millions is just beginning to be understood.

Emulsifiers help keep sauces smooth and ice cream creamy, they hold dressings together and prevent mayonnaise from separating into oil and water. The new research gives reason to suspect that emulsifiers could raise your blood sugar, make you fat and even make your butt hurt.

The study, published in Nature, looked at two common emulsifiers, Polysorbate 80 and carboxymethylcellulose (CMC), and found a range of metabolic problems that appeared in mice who were given water dosed with these chemicals in quantities proportional to what a human might consume. The mice who drank either emulsifier tended to eat more, gain weight and develop conditions like irritable bowel syndrome, colitis and metabolic syndrome, which is a range of pre-diabetic conditions.

The effects of these additives were dependent on the dosage; the more emulsifier the mice consumed, the worse off they were. A control group drank water laced with a common preservative, sodium sulfite, and did not show any negative effects on the gut.

The team found that the bacterial diversity of the mice microbiomes were altered. They also discovered the mucous membrane of the gut was thinner in mice who were fed emulsifiers. The thinner mucous membrane allowed the microbes closer to the gut wall than they would normally get, they wrote, which could cause the observed inflammation of the gut wall, and diseases like irritable bowel syndrome.

John Coupland, a professor of food science at Penn State University, thinks this research could be a game changer, providing it can be shown that these emulsifiers can do to humans what they do to mice. “[It] really challenges a lot of the way we think about assessing toxicology and nutritional value of foods,” he said in an email.

Coupland noted that Polysorbate 80 and CMC are very different molecules. While Polysorbate 80 is small, and doesn’t carry an electrical charge, CMC is large, and charged. These molecules are not only built differently, but they behave differently, he said, pointing out that CMC is technically not even an emulsifier, but a thickener that makes emulsions more stable. That they both cause similar microbial disruptions, mucous reductions and associated health problems is a striking discovery.

In an email interview, the study’s co-author, Benoit Chassaing, acknowledged that CMC is more of a thickener than an emulsifier, but noted that it does have emulsification properties, due to its charge. He suspects the resulting emulsifying activity is to blame.

I asked how they originally thought to look at emulsifiers. Chassaing explained:

"The incidence of IBD and metabolic syndrome has been markedly increasing since about the mid-20th century, and this dramatic increase has occurred amidst constant human genetics, suggesting a pivotal role for an environmental factor. We considered that any modern additions to the food supply might play an important role, and addition of emulsifiers to food seems to fit the time frame of increased incidence in these diseases.

"We hypothesized that emulsifiers might impact the gut microbiota to promote these inflammatory diseases and designed experiments in mice to test this possibility."

The team is currently investigating other common emulsifiers, aiming to identify any others that might cause microbial disturbances, or inflammation of the gut. Carrageenan, Chassaing noted, has already been foundto cause inflammatory bowel disease in rats. Extracted from seaweed, carrageenan is widely used in processed “natural” foods. Like CMC, carrageenan is more of a thickener than an emulsifier, but is, like CMC, on the spectrum of additives that exhibit emulsifying properties.

Food additives are tested for certain toxilogical activities, like the ability to cause cancer, or to cause a mouse to instantly drop dead. But they aren’t tested for any potential effects they might have on one’s microbiome, or their ability to stimulate one’s appetite, or cause conditions like irritable bowel syndrome.

If the recent results on mice can be repeated in humans, current testing protocols for food additives will be revealed as woefully inadequate.

If you stay away from highly refined, heavily processed foods with long lists of ingredients, you can avoid most of these additives in one swoop, and not have to worry about inadequate testing procedures.

But not everyone has the luxury of being able to avoid processed foods, especially the poor, and ironically, people stuck in institutions like hospitals. That’s why we need the standards by which food additives are evaluated to be updated sooner, rather than later.