"Go ahead and call me a whore”: Lena Dunham’s fabulous, feminist appearance on "Scandal"

Olivia Pope and co. took on a fully sex-positive attitude in this week's kinky, astute episode 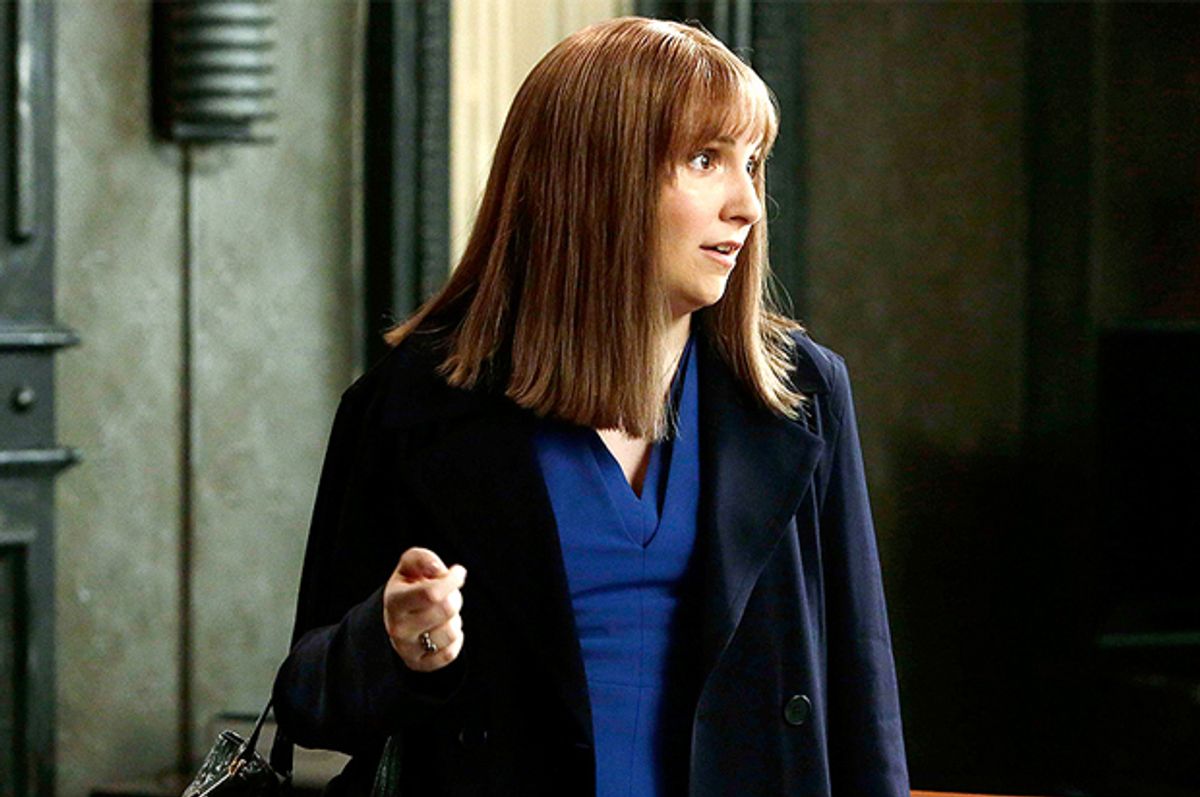 I’ll be honest: “Scandal” is probably my favorite show on television, because it allows me to do what I secretly always want to do when I watch TV -- which is, turn my brain off completely. It’s not to say that Olivia Pope’s universe isn’t full of the sorts of feministy symbolism, complex power dynamics and general girl power that usually set off my professional-gender-writer spidey-sense and get me not only thinking, but typing as well. It’s just...the show simply isn’t that deep. Complicated, certainly. But not, as my colleague Sonia Soraiya has pointed out, very thoughtful. And that’s okay.

But that's also not always true, as this week’s partly humorous, partly shocking, very feminist episode proved. Going in, we knew we were getting something different: Lena Dunham donned a heinous wig (which could not possibly have come from the show’s costume closet, because seriously, have you seen Mellie’s wigs?) and guest-starred as “Kinky Sue,” a former EPA chemist and sex-positive millennial, who plans to publish a tell-all memoir about the many Washington power players she’s slept with. When Sue attempts to extort the men in her book for $3 million not to publish (Dunham might’ve guest-starred, but we are still talking about “Scandal”), Olivia tries to quash her effort with some good ol’ fashioned slut-shaming. And that’s when things start to get fierce.

Dunham’s character, who also happens to be a longtime Olivia Pope fan, fires off a remarkably feminist response to Olivia’s threats of public shaming, saying she’s unafraid of being called a “whore” and calling out the show’s protagonist for trying to “protect” her:

Protect me? That’s awful. I thought you’d be brave. I thought you’d be adventurous, fearless, sexy, confident, but instead you’re just this dried up prude who — instead of celebrating the fact that I fully own my body and use it however I want, with whomever I want, as many times and in as many kinky ways as I want — is shaking your finger at me? You’re telling me to be afraid of what names someone’s going to call me just because I had the audacity to have too much great sex, as if picking up a hot stranger at a bar for a dirty screw is a crime. ... This is my life, my body, my story to sell or tell ... Go ahead and call me a whore. Everyone who writes a memoir is a whore. You can also call me an author, an artist, a businesswoman, you can call me smart and, pretty soon, you can call me successful.

But this is just the beginning, and it’s not just Dunham’s character! Later, it’s revealed that Sue was fired from her job at the EPA after her boss sexually assaulted her, which sends Olivia into a passionate, personal tirade about seeking justice for the crime. Separately, we get to see Abby tackle gender-based double standards for professional women, as she explains to her boyfriend that, despite the fact that she’s the White House press secretary, her only public validation comes from being someone’s girlfriend. None of this is to mention the effect Sue’s fearless monologue has on Olivia, who ends the episode by going to a bar, picking up a (very attractive) dude, bringing him home with her and then demanding he go to her bedroom and get naked.

It’s so much to unpack I don’t even know where to begin, which is ever so typical of “Scandal” and its Shondaland contemporaries. But, also typical of a show that allows viewers to turn their brains off if they want, the intended messages are laid out quite clearly: Female sexuality here is a crucial power tool, and it’s also something over which the women of the show do retain singular control. They can use it to do what they want and get what they want, and sometimes all they want is sex itself. They have desire, but they're also in charge.

That sentiment became clearer recently when Olivia chose herself over both Fitz and Jake, but with this week's episode, “Scandal” has finally made it plain that sex isn’t just politics or even a weapon. It is, itself, a form of female empowerment, and it’s portrayed as a distinctly enjoyable one. To send such a sex-positive message on network television — with the added layers of acknowledging everyday sexism and making a statement about believing sexual assault survivors! — is a huge, and distinctly feminist, move.

And it’s also a fun one to watch, regardless of how much brain power a person utilizes doing so. The women of “Scandal” aren’t just using sex to get ahead. In a world that treats powerful women and powerful men unevenly, the characters are indulging in their own sexuality and getting theirs — and it’s really, really hot, despite Dunham’s poor choice of wig.

Watch a clip of Dunham guest-starring alongside Kerry Washington on “Scandal” below:

And here's Abby's speech about everyday sexism, for good measure: