GOP's Netanyahu problem: Will it stop pretending to support a two-state solution, too?

The Republican party, at least on paper, still supports a two-state solution. Will they drop the pretense now? 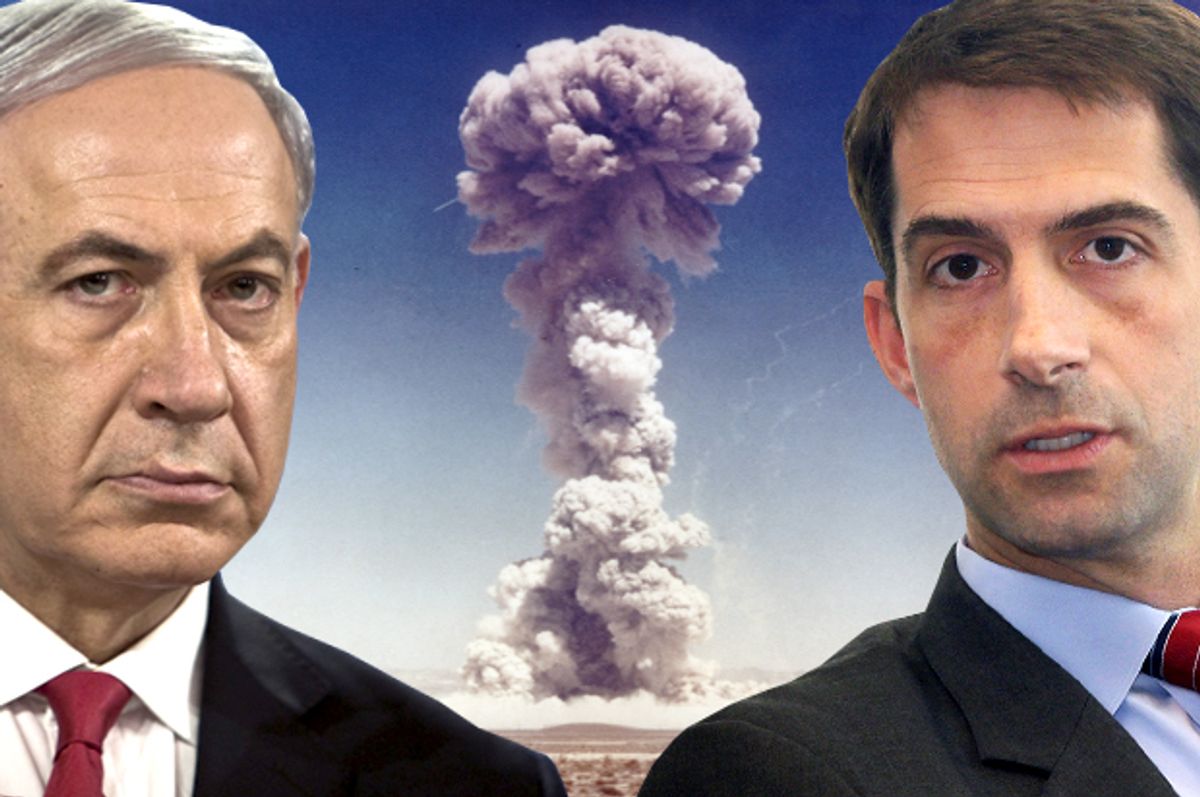 The day before the Israeli election, Prime Minister Benjamin Netanyahu was asked, point-blank, "If you are prime minister, a Palestinian state will not be established?” He responded, "Correct."

This infuriated the White House, the British government, and whatever other few governments have remained willing to stick their necks for Israel over the past six years while Netanyahu has done nothing but escalate tensions in return. While some dismiss Netanyahu's comments as, ya know, just one of those things you say to win the election, the White House seems to believe that words like these matter. And if Netanyahu and his new, even more right-wing government are going to take the public posture that they aren't interested in negotiating a two-state solution, then the White House may not protect them from in the U.N. any longer.

The White House threat must have had some effect, as Netanyahu began backtracking Thursday. In an interview with MSNBC's Andrea Mitchell, the PM said that of course he wants a two-state solution, in theory, eventually, someday, later...

“I haven’t changed my policy,” Mr. Netanyahu said in the interview, his first since his resounding victory on Tuesday, which handed him a fourth term. “What has changed is the reality.”

“I don’t want a one-state solution; I want a sustainable, peaceful two-state solution, but for that, circumstances have to change,” he added. “I was talking about what is achievable and what is not achievable. To make it achievable, then you have to have real negotiations with people who are committed to peace.”

The State Department hasn't quite cooled down yet.

Netanyahu declared that no Palestinian state would be established under his watch, and it worked. He leaned hard on apartheid in order to win himself another term, and it worked. This is a bad development. And yet here was Senator Mark Kirk on Wednesday lining up right behind Netanyahu, according to New York Times reporter Jonathan Weisman:

I laughed when Weisman asked, "Is that the new position of the Republican Party?" What does he mean, "new"? Have we had any indication over at least the past six years that the Republican party supports the establishment of a Palestinian state?

It turns out that support for a two-state solution was still in the 2012 Republican party platform. That tells you all you need to know about the importance of party platforms nowadays. Did you get the impression, reader, that Mitt Romney believed Palestinians had a right to statehood? We know that he didn't, because he said as much at a private fundraiser recorded that year. This was the other big reveal from the secret tape now mostly remembered for Romney's "47 percent" comment.

One of the various losers who nearly stole the GOP presidential nomination from Romney that cycle was Newt Gingrich. What did Gingrich have to say about Palestinian statehood at the time?

Former Speaker Newt Gingrich dismissed the Palestinian bid for statehood as the effort of an "invented Palestinian people, who are in fact Arabs, and were historically part of the Arab community."

Gingrich also said the Palestinian Authority, which has typically represented the moderate wing of Palestinian leadership and formally accepts Israel's right to exist, is motivated by "an enormous desire to destroy Israel."

Mike Huckabee, who is planning to run for president again this cycle, recently echoed Gingrich's assertion about the Palestinian identity being a fictional ploy to wrest land away from Israel.

One fellow who listens to this and likes what he hears is Sheldon Adelson, the casino billionaire who threw tens of millions of dollars at Newt Gingrich in 2012, singlehandedly keeping his campaign afloat long past its natural expiration date. Adelson intends to spend just as much, if not more, on whatever dolt adheres most pathetically to his foreign policy. We've already seen the humiliating display of Chris Christie begging for Adelson's forgiveness after saying "occupied territories" in a speech. Will expressing support for a Palestinian state, too, now be seen as a gaffe?

Neither Netanyahu nor the Republicans have much interest in pursuing a two-state solution. But when Netanyahu expresses that publicly, he at least faces pressure from international allies that compels him to walk it back. There are no forces compelling Republicans to walk it back when they drop the mask. There's only encouragement to keep moving in that same, incendiary direction.