I'm sorry, but women on TV apologize too much 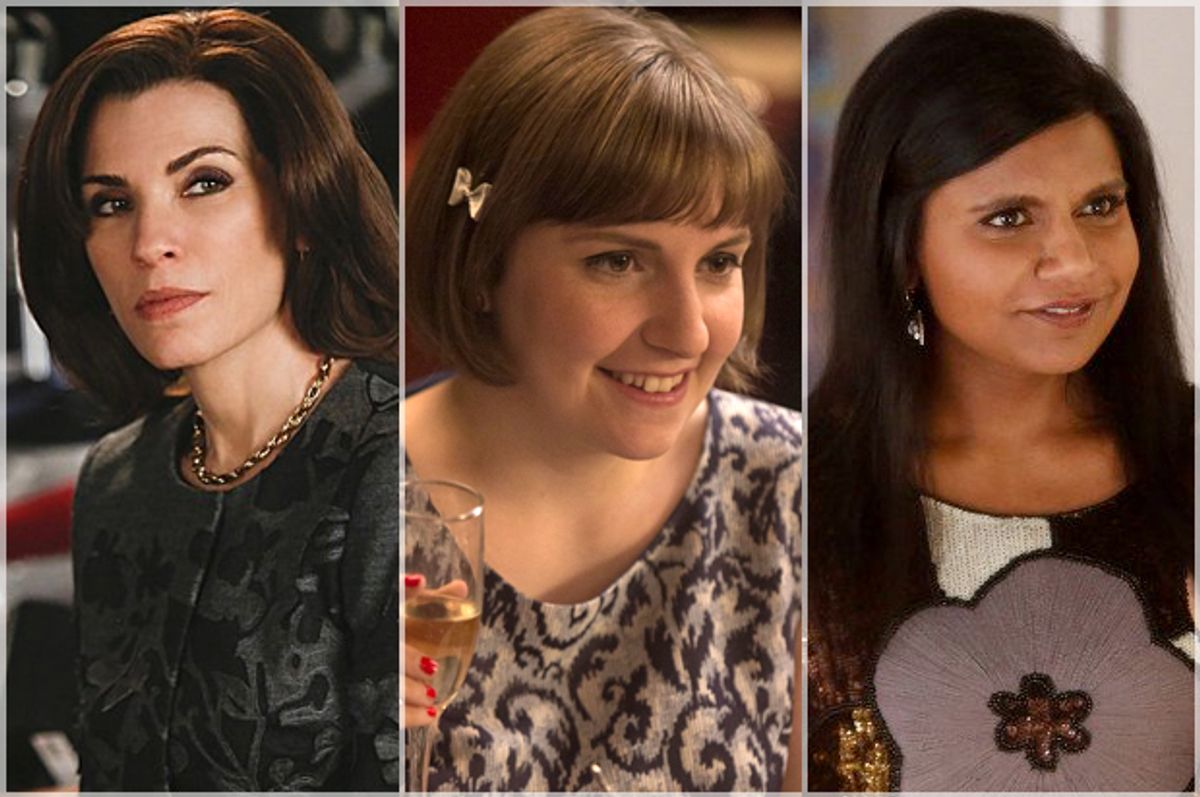 A few days ago on the subway, I tripped over the foot of a dude casually draped across his seat. And those two horrible words sailed out of my mouth faster than my palms hit the floor. I’m sorry. Rather than directing my anger at the manspreading offender, I claimed the fault and hated myself for it.

The apology is the punctuation to the female sentence. Though we’re experts at chastising each other for the behavior, we can’t seem to stop. Even science says we do it too much. Every day I watch as women apologize to me for doing their jobs. For sweeping under my table at the coffee shop, or not returning a phone call during an important meeting. It’s an epidemic where we’re all patient zero.

If life were a little more scripted, I might choose to edit out all those unnecessary sorrys. Which made me start to wonder. Are my favorite fictional ladies suffering from the same predicament? Forever a fangirl, I take my cues from powerful women on my TV screen. But are they infecting the air without us ever realizing it? I decided to take a look and watch a whole bunch of television. For science, of course.

For my apology experiment, I watched five current shows from a variety of networks. Each show was created (or co-created) by a woman and features a female as the lead. My selections were "Girls," "The Good Wife," "Madam Secretary," "The Mindy Project" and "Nashville," and I watched five recent, sequential episodes of each show. Every time a man or woman said “I’m sorry,” I recorded it and made a note of the context. To ensure the apologies weren’t going in one ear and out the other, I confirmed my data with online closed caption databases. After 15 hours of couch potato science, here’s what I found.

Lauded for its representation of formidable and complex women, "The Good Wife" was the unsurprising, unapologetic front-runner. Alicia Florrick has come a long way after five and a half seasons of lawyerly growing pains. In fact, a little math and script searching told me that she’s apologizing 20 percent less than in the show’s first season.

Alicia’s apologies are chiefly courtroom etiquette or condolences to clients. I enjoyed holding my breath as she made it through one whole episode without a single “I’m sorry.” She didn’t even apologize to her campaign manager for grabbing his face for a random victory makeout in a parking garage. Instead, she said, “You don’t need to instruct me about my feelings.” And then he apologized. My heart exploded like a confetti cannon.

On HBO’s "Girls," you might expect a flood of apologies for the menagerie of character flaws. But that’s not actually the case. Lena Dunham’s hapless Hannah is only apologizing about once an episode, and her friends aren’t far behind. Twenty-something women are notorious for this behavior, yet somehow the writers have managed to create flawed young women who don’t have to spout “I’m sorry” every two minutes to get a laugh or a nod from a male peer.

Not far behind Hannah Horvath is our queen Rayna Jaymes of ABC’s "Nashville," who proves that nothing is your fault when you have hair like Connie Britton's. "Nashville" is a fan favorite that can be a bit of a soap opera, so my expectations for a low sorry count weren’t high. Women apologized roughly seven times in an episode, and these apologies mostly came from our ingénue Scarlett, ever sorry for being stomped on, or Laura Benanti’s Sadie, a victim of domestic violence. In five episodes there were exactly zero sorrys from Hayden Panettiere, which is oh-so-perfectly in character for Juliette Barnes.

The funny thing about "Nashville" is that out of all the shows, it had the lowest percentage of female apologies compared to men. Apparently dudes just really love to say they’re sorry on that show, which makes sense because they are pretty hopeless. All of the shows, except for "Girls," hovered around the 50/50 mark for male and female apologies. Which I think is pretty admirable for television. Perhaps there’s something to the idea of letting women write for women. Hmm.

There’s not much to say about "Madam Secretary," except that Téa Leoni’s Elizabeth McCord might need to take a look at Hillary Clinton’s playbook. Sure, there’s the occasional diplomatic “sorry” when another foreign leader has died, but this fictional secretary of state is apologizing for doing her job just a little too much for my comfort. But it’s still season 1 for the show, so I’ll be kind and consider it room for character development.

And then we have last place. "The Mindy Project" isn’t a show I usually watch, but I admire Mindy Kaling’s success as a writer in a male-dominated field. But by the twelfth “I’m sorry, Danny,” my viewing had become agonizing. Can’t a quirky female be funny without punctuating her jokes with those words? Apparently not on this comedy, where Mindy apologizes an average of five times per 20-minute episode. Yikes.

Of course, there are many other shows I could watch to draw larger conclusions. Shonda Rhimes and her legion of TV heroines could be their own experiment, as would a look at shows scripted by men (I’m looking at you, Ryan Murphy). But there are few observations I can take away from my binge watching, other than the fact that "Good Wife" creators Robert and Michelle King should be allowed to write TV until the end of time.

On television, it’s hard to determine how much apologizing is too much. Characters tend to screw up more in 42 minutes of airtime than I might in a month. But it’s not the grievous wrongs that stuck out for me during my viewing. The most frequent offenses were those near-automatic sentence starters for doing their work or even simply entering a room. Extravagant politeness that could easily be cut. I found that all TV women, across all ages and ranks, are guilty of the “I’m sorry” sentence starter. Even our supreme leader, "The Good Wife's" Diane Lockhart, did it once. (I know, it hurt me too.) Even if it’s asking for clarification or interrupting a conversation, I think we could do without those words, because male characters don’t use them as often.

Also, in an ideal TV world, I’d like to see woman apologizing less to their daughters for having demanding careers. I observed this pattern on "The Good Wife," "Nashville" and "Madam Secretary." The average viewer understands that balancing a career and family is hard, but you don’t need to beat us over the head with the “I’m sorry” stick if dad characters aren’t being given similar scenes with their kids. There should be 10 scenes where a daughter is proud of her mother for every moment Mom apologizes for missing dinner.

So what’s my personal takeaway from watching 15 hours of television? (Other than the fact that Julianna Margulies’ eyebrows are the eighth wonder of the world, of course.) Should I be counting my own apologies during the day and reducing them? Avoiding TV shows that have women taking unnecessary responsibility? Tweeting writers to cut back on the sorrys? I say all of the above.

TV writers have the opportunity to show us that the sky won't fall when a woman doesn’t apologize, and actresses have the responsibility of saying no to a line of dialogue that spreads the virus. As for me, I’m the only person who can script my own life. I don’t have three weeks and a white board to decide what I’m going to say when someone bumps into me on the street or I don’t immediately respond to an email. But I can keep my mouth shut until I think about what I want to communicate. Life may be one giant improv show, but that doesn’t mean I have to be so sorry about it.

Kathleen Smith is a writer and creator of the blog Fangirl Therapy, an upcoming book. Follow her @fangirltherapy