New York's trendiest restaurant is serving you garbage (and it's awesome)

Waste is the quintessential American diet, says renowned chef Dan Barber. But it doesn't have to be that way 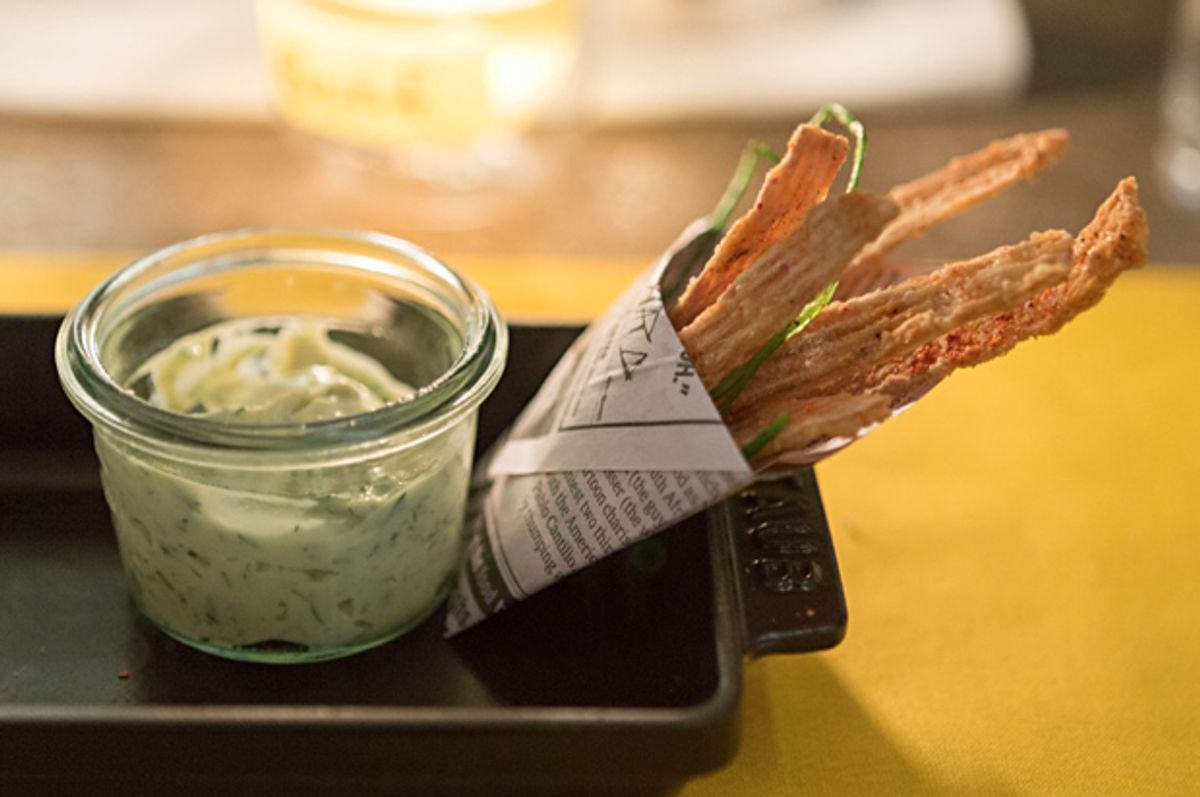 At first, it sounds like an unresolvable contradiction: a meal that will set you back $75, and which consists almost entirely of garbage.

It begins to make sense, though, once you begin to consider how much of what we see as disposable actually has value. Or can have value, in the hands of the right person. Stepping up to the challenge is Dan Barber, the chef and co-owner of Manhattan's Blue Hill, who transformed the high-end restaurant, for two weeks only, into wastED, a pop-up experiment that just might change the way we think about food waste.

I first spoke with Barber before the release, last year, of "The Third Plate," his nearly 500-page attempt to push the farm-to-table movement even further, into a full-fledged food revolution. It was through his research for the book, Barber recently told me, that he made the connection that led to wastED. The history of diet and cuisine, he realized, is based on preventing waste: "You couldn't afford waste when these recipes and expectations for meals were being developed; you didn't have the luxury of waste," Barber explained. It's a principle, though, that's been lost in our modern way of eating.

If that's the case, then the meal I enjoyed this past weekend at wastED was the most exotic I've ever had.

Here I should note that I attended WastED, on Barber's invitation, in order to better understand the project -- and not in the capacity of a food reviewer. To be honest, I wouldn't know the first thing about doing that — although, an actual food reviewer who was sitting next to me at the bar (and who seemed to enjoy his experience) told me it's easier than I think: All you have to do, he said, is say whether the food tasted good or not.

Well, I can say it did. Well, it mostly did. Better, perhaps, to say it was never boring.

That was to be expected from the moment I saw WastEd's menu, which comes complete with its own glossary. I learned, before putting anything into my mouth, that there's edible grain left over from the brewing and distilling process; that "unlaid eggs...are sometimes discovered in the oviducts of slaughtered laying hens"; and that laying hens, which are slaughtered in old age, when their egg production slows, typically end up in pet food -- but can also be used to make a mean chicken soup.

Even with the glossary's help, when I sat down at wastED last Saturday night I had a lot of questions about the menu. Had "last night's champagne" already gone flat? What is "Cornell drop-out squash"? And isn't there a reason that we don't eat some of this stuff in the first place?

(I'm looking at you, "unsellable offal cuts" from the neighborhood butcher shop.)

Well, here are the answers I got: The champagne is reduced into a cocktail syrup; the squash was rejected from a Cornell University seed trial; and, for the most part, there mostly isn't a reason -- it's just that no one's taken the time to figure out how to use this food.

So, despite a few reservations, I dug in. My feast included a "dumpster dive" salad salvaged from a large-scale food processor; bagels and lox made from the dark part of salmon, with seasonings scooped from the bottom of an everything bagel bin; fried skate-wing cartilage; a meaty fish collar; and, my absolute favorite, a burger crafted from the pulp left over from a cold-pressed juice shop.

There was a moment of truth when I was forced to weigh the irony of leaving food on my plate against the obviously bad idea of scarfing down every last bite. But I still managed, somehow, to make room for dessert — panna cotta made with sake lees, courtesy of the night's guest chef, Dominique Ansel (of "cronut" fame). I washed it all down with cascara, a thick, hot tea made from the dried husks of coffee cherries (one of those things that definitely tasted interesting, if not necessarily good).

It could have been possible to pull back from the table and think: Sure, in the hands of a great chef, even skate-wing cartilage can be made appetizing. That specific ingredient, in fact, required not just culinary skill but a deep fryer, a delectable dipping sauce, and a cute little newspaper wrapping. (Barber was going for a variation on fish-and-chips.) And it was still a bit...strong.

I didn't even try the broth made from the dark, oxidized outer layer of beef, which has a flavor Barber described to me as "not rancid...but not pleasant to eat." (That's why it's usually discarded when we cook steak.) I likewise skipped the meatloaf dish given the excruciatingly literal name "dog food," though I can imagine they wouldn't be an easy sell for someone without Barber's pedigree.

And yet Barber's wild creativity is based, often, on those long-standing traditions he claims Americans have moved away from. He put those culled laying hens to use, for example, in pot-au-feu, the classic French broth made from low-cost cuts of meat and cartilage -- also known, to many of us, as waste.

The economic argument could be a major selling point in helping to get people to try new (or forgotten) things, though that certainly wasn't reflected at wastED, where each dish cost $15. But most of that cost, Barber said, came from the extra labor needed to prepare them -- they hadn't been cleaned for retail sale -- and the distribution expense. And in both cases, he argued, the trumped-up prices were a function of the lack of demand for those ingredients. Nonetheless, there's certainly no lack of suppliers eager to sell leftover food items instead of tossing them: The fish distributors with the broken razor clams, the pasta chefs with the leftover trimmings, the cheese makers with whey to spare, Barber said, were happy to share their leftovers, which became, for him, an "untapped goldmine of free stuff." Many, he said, even described it as cathartic.

Maybe, Barber suggested, the wastED project could begin to create that demand. "That’s a tall order," he admitted, "but restaurants seem positioned more than ever to help shape trends."

Yet rethinking food waste, in Barber's grand vision, goes beyond embracing ugly vegetables and making use of every last scrap of meat. It requires, instead, the large-scale transformation of our food system. "When we have steak from a cow that's been fed corn, we could eat the entire thing -- you could even eat the bone of a Porterhouse -- and say we didn't waste anything," he explained. But in so doing, we'd be forgetting that the production of steak, itself, is incredibly wasteful, requiring enormous amounts of land, water and nitrogen fertilizer (and emitting an unsustainable amount of greenhouse gases.)

On wastEd's menu, that problem appeared in the form of "cow corn," or field corn, a different variety from the sweet corn we usually eat that happens to represent about 99 percent of all the corn grown in the U.S. "Everyone says it's inedible, but it's not," Barber insists -- you can eat it, just not in the way you typically consume corn. His solution: a cracker meant to be broken into his dry-aged beef ends soup. It's a culinary experience, but also an educational one: You should eat it, Barber said, and then start asking questions. Like, "Why are we feeding this corn to cows and not people?" And from there, perhaps, "Why couldn't we produce a lot more food if we started to look at these things differently?"