"Endless life is not worth living": The comfort of living with a conclusion in mind

In my youth, death was part of my literary imagination -- time had been granted to me without term of expiration 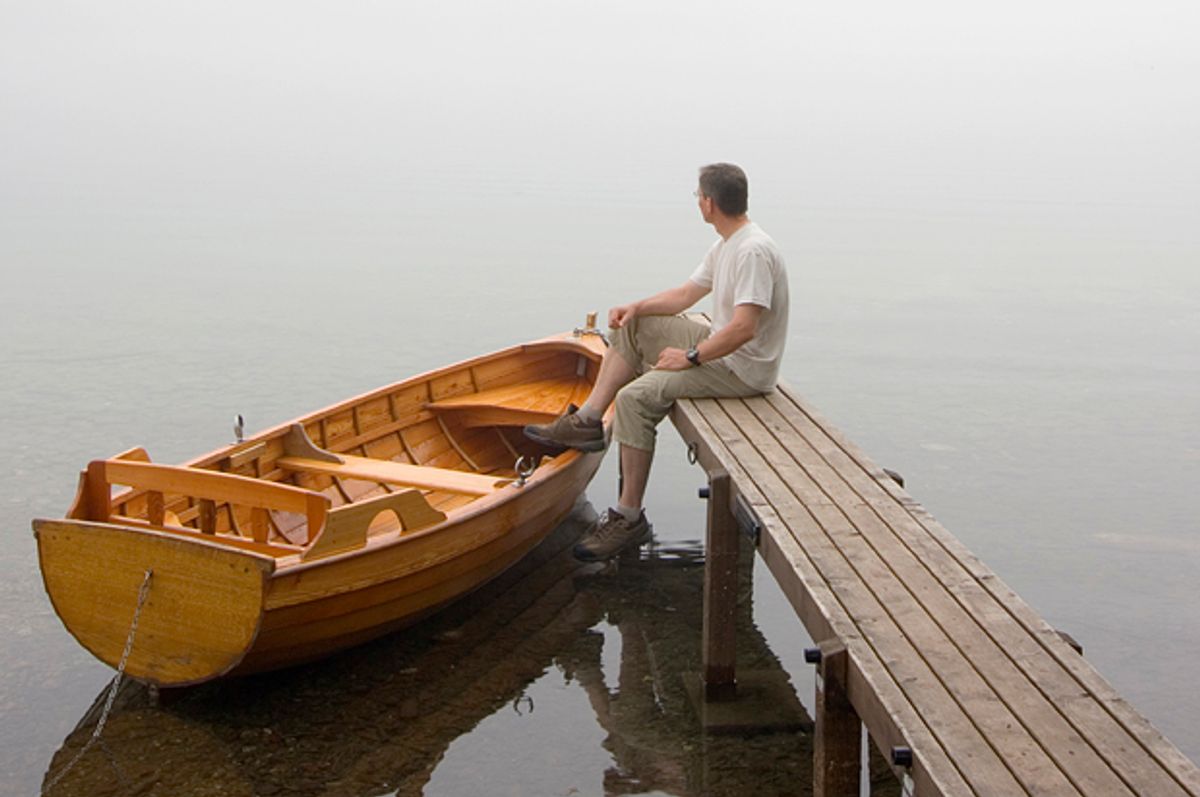 Sometime in the nineties, when I was visiting Berlin, the writer Stan Persky took me to see Lucas Cranach the Elder’s painting of the Fountain of Youth at the Gemäldegalerie. It is a medium-sized canvas that depicts, in great detail, a rectangular swimming pool, seen in perspective, full of happily cavorting men and women. Old people are arriving from the left in carts and wheelbarrows; youths emerge naked from the other side, where a series of red tents await them, like those bathing-machines of which Lewis Carroll’s Snark was so inordinately fond.

The Cranach painting led Stan and me into a discussion of whether we would like to extend the length of our lives, if such a thing were possible. I said that the foreseeable end did not frighten or worry me; on the contrary, I liked the idea of living with a conclusion in mind, and compared an immortal life to an endless book which, however charming, would end up being tiresome. Stan, however, argued that living on, perhaps forever (provided he were free of sickness and infirmities), would be an excellent thing. Life, he said, was so enjoyable, that he never wanted it to end.

When we had that conversation, I was not yet fifty; more than fifteen years later, I am more convinced than ever that an endless life is not worth living. It is not that I think I have many decades left to go: it is difficult to be certain without holding the entire volume in my hands, but I’m fairly sure that I’m on one of the last chapters. So much has occurred, so many characters have come and gone, so many places have been visited that I don’t suppose the story can continue for many more pages without petering out into an incoherent and incontinent babble.

“The days of our age,” the Psalmist tells us, “are threescore years and ten; and though men be so strong that they come to fourscore years: yet is their strength then but labour and sorrow; so soon passeth it away, and we are gone.” I am now less than a decade away from that figure, which until recently seemed to me as remote as the last digit of pi. I realize that in what I must now call my old age, my body is constantly shuffling its weight upon my conscious mind, as if jealous of the attention I give my thoughts and trying to edge them out by brute force. Up to a short time ago, I had imagined that my body ruled only over my youth, and that with maturity, my mind would take the privileged place. And because of the hold I believed each one, body and mind, had upon a distinct half of my life, I imagined that they would reign unobtrusively and fairly, one in quiet succession after the other.

In the beginning, I suspect, that is how it was. In my adolescence and early adulthood, my mind seemed like a jumbled, uncertain presence, clumsily intruding upon the carefree life of the ruling body, which took pleasure wherever it found it. Paradoxically, my body felt then less solid than my thoughts, and made its presence felt only through my eclectic senses, smelling the cool air of the morning or walking through a city at night, eating breakfast in the sunshine or holding my lover’s body in the dark. Even reading was a bodily activity: the touch, the smell, the look of the words on a page were an essential part of my relationship to books.

Now pleasure comes mainly through thinking, and dreams and ideas seem richer and clearer than ever before. The mind wants to come into its own, but the old body, like a deposed tyrant, refuses to withdraw and insists on constant attention: biting, scratching, pressing, howling, or falling into a state of numbness or unwarranted exhaustion. A leg burns, a bone chills, a hand seizes up, an anonymous bluntness prods me somewhere in the gut, distracting me from books and conversation and even from thought itself. In my youth, I always felt as if I were on my own, even in the company of others, because my body never nagged me, never appeared as something separate from me, as a shameful Doppelgänger. It was absolutely and indivisibly my whole self, singular, invincible, casting no shadow, like the body of Peter Schlemiel. Now even when I’m alone my body is always there like an unwelcome visitor, making noises when I want to think or sleep, elbowing my side when I sit or walk about.

In a Brothers Grimm tale I liked as a child, Death is struck down on a country road and is rescued by a young peasant. To thank him for his deed, Death makes his rescuer a promise: since he cannot exempt him from dying, for all men must die, before coming for him Death will send his messengers. Several years later, Death appears at the peasant’s door. The terrified man reminds Death of his promise. “But have I not sent you my messengers?” Death asks. “Did not Fever come and smite you, and shake you, and cast you down? Has Dizziness not bewildered your head? Have not Cramps twitched your limbs? Did not Toothache bite your cheeks? And besides that, has not my own brother Sleep reminded you every night of me? Did you not lie by night as if you were already dead?”

My body seems to welcome these messengers daily, preparing to receive their master. The prospect of a longer sleep doesn’t trouble me, and that too has changed. In my youth, death was merely part of my literary imagination, something that happened to evil stepmothers and stout-hearted heroes, to evil Professor Moriarty and brave Alonso Quijano. The end of a book was conceivable and (if the book was good) lamented, but I could not picture the possibility of my own end. Like all young people, I was immortal, and time had been granted to me without term of expiration.

As May Swenson put it:

Can it be there was only one

summer that I was ten?

It must have been a long one then—

Today, summers are so short that barely have we put out the garden chairs when we are storing them away again; we hang up the Christmas lights for what seems only a few hours, while the new year comes and goes, and a new decade follows. This rush doesn’t unsettle me: I’m accustomed to the accelerated pace of the final pages in a story I’ve enjoyed. I feel some mild regret, yes. I am aware that the characters I grew to know so well will have to say their few last words, perform their last gestures, circle just one more time around the inaccessible castle, or drift away into the sea fog strapped onto the back of a whale. But everything that needed to be tidied up is tidied up, and anything that must remain unresolved will remain unresolved. I know that my desk is ordered to my satisfaction, my letters mostly answered, my books in their right places, my writing more or less finished (not my reading, but that, of course, is the nature of the beast). My list of “Things to Do,” propped up in front of me, still has a number of uncrossed items on it; but they have always been there and they always will, however many times I reach the bottom of the list. Like my library, my list of “Things to Do” is not meant ever to be exhausted.

Talmudists say that the stern injunction to make certain, through thoughts and deeds, that one’s name is written in the Book of Life means that we ourselves must become responsible for that inscription, that we must be our own scribes. In that case, for as long as I can remember, I have been writing my name in the words of others, taking dictation, as it were, from those authors (such as Stan Persky) whom I’ve had the fortune to make mine through their books. Petrarch, in one of his letters, confesses that he has read Virgil, Boethius, and Horace not once but thousands of times, and that if he stopped reading them now (he is writing at the age of forty), for the rest of his life their books would still remain within him, “since they have dug their roots into my heart, so deeply that often I forget who wrote them and, like someone who because of having owned and made use of a book for so long, I become myself its author and hold it for my own.” I echo his words. As Petrarch understood it, the intimate conviction of readers is that there are no individually written books: there is only one text, infinite and fragmented, through which we leaf with no concern for continuity or anachronism or bureaucratic property claims. Since I first started reading, I know that I think in quotations and that I write with what others have written, and that I can have no other ambition than to reshuffle and rearrange. I find great satisfaction in this task. And at the same time, I’m convinced that no satisfaction can be truly everlasting.

I find it easier to imagine my own death than to imagine the death of everything. In spite of theology and science fiction, the end of the world is difficult to conceive from our egocentric viewpoint: what is the stage like once the audience has departed? What does the aftermath of the last universal moment look like once there is no one left to see it? These seemingly trite conundrums show up to what point our capacity to imagine is bound by the consciousness of the first-person singular.

Seneca tells the story of the ninety-year-old Sextus Turannius, an administrator under Caligula, who, when the emperor relieved him of his post, “ordered his household to lay him out and start wailing about his bed as if he were dead. The household went into mourning for the unemployment of their aged master and did not lay their mourning aside until his work was restored to him.” With this stratagem, Turannius achieved what appeared to be impossible and became a witness to his own funeral. Seventeen centuries later, and for less practical reasons, the eccentric American businessman “Lord” Timothy Dexter faked his own death in order to see how people would react. Since the apocryphal widow didn’t show enough signs of distress at the funeral, upon restoring himself to life, the disappointed Dexter gave her a tremendous beating.

My imagination is more modest: I simply see myself concluded, devoid of decisions, of thoughts, fears and emotions, no longer here and now in any perceptible sense, unable to use the verb “to be.”

Alberto Manguel is an internationally acclaimed anthologist, translator, essayist, novelist, and editor as well as the bestselling author of several award-winning books, including "The Dictionary of Imaginary Places" and "A History of Reading." His latest novel, "All Men Are Liars" (Riverhead), was published this month.