The left's real choice in 2016: Why it doesn't need Elizabeth Warren to run

For all the talk of needing to primary Hillary, here's how liberals really take over the party -- and America 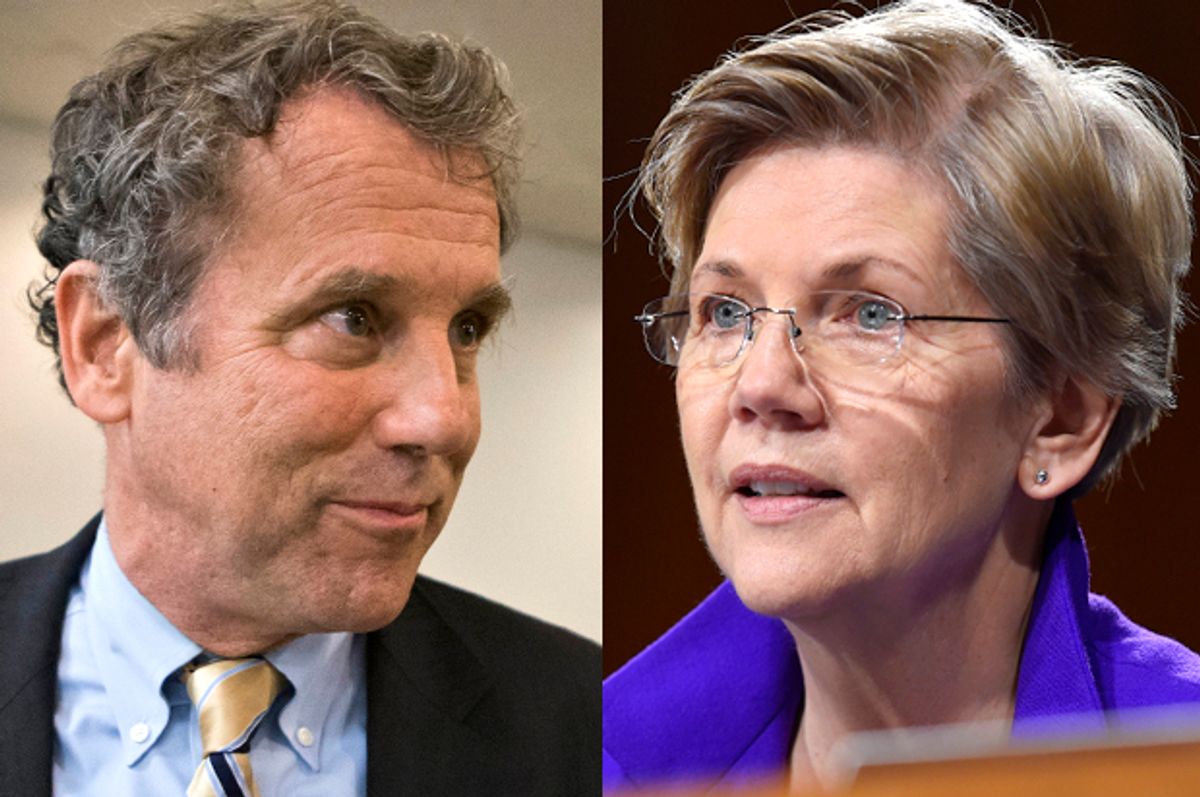 Disheartened progressive Democrats face the prospect of a 16-year gap between the last closely contested presidential primary in 2008 and what would likely be the next one in 2024. Elizabeth Warren isn’t running. Hillary Clinton is and she starts out with very large leads in the early states. But hope is not lost. The choice facing progressives is not and never has been to somehow make Warren vs. Clinton happen or to spend the next 22 months enclosed in a political hellscape fit for only Sean Hannity and Lanny Davis. The 2016 election season does not have to be devoid of purpose or redeeming value.

If something changes in Iowa or New Hampshire Hillary Clinton could be in danger of being upset. At this point she looks like a strong favorite for the Democratic nomination and, by extension, if people feel their economic security is headed in the right direction from around this time next year to the election in November, a pretty good bet to be the next president.  Progressives may not be able to change who is nominated but they can affect who is in the room with the nominee and the forces the nominee has to contend with if they reach the Oval Office.

Sure, garbage will not be in short supply this cycle. Democrats will be alleged to "be in disarray," as in having a healthy internal debate. Declarations that the Republican establishment is putting the Tea Party in its place will abound in spite of what is happening around those making the declaration. The strange notion that we live in a nation of political junkies closely following every single development will inform a lot of analysis. Lindsey Graham, Chris Christie and Jeb Bush will be to this cycle what John McCain and Jon Huntsman were to cycles past as much of the DC press barely manages to conceal its affection.

Surrogates will say things that will make people in every campaign including their own wonder what they could possibly have been thinking. Candidates’ physical appearance and meaningless “gaffes” (Marco Rubio took a sip of water as human beings are known to do and it became a thing) will get much more attention than they should. It would not be entirely shocking to see a prominent pundit assert that Michael Bloomberg should be nominated by either party or a new vehicle party designed for him; or preferably given the nomination of both parties and the new third party by acclimation because there’s nothing so wrong with America that cannot be fixed by what is right with a soft plutocrat in the guise of a “centrist” technocrat. Polarization will be roundly condemned.

The things voters in both parties tend to agree on that run counter to elite preferences will be overlooked.

In the midst of all of this lies an opportunity for progressives to seize and wield for substantive purposes a dynamic they’re used to rightly bemoaning: whether through the actions of a current president or the candidates in the running for the office, the presidency is the surest access point to a discussion about pretty much anything. A constant pivot from rebuffing attacks from the right to giving credit to a national Democrat when due, to giving strong criticism of that same Democrat when it’s warranted, may appear dizzying but it’s something a lot of Democrats have gotten used to over the last seven years. Yes, elected Republicans are awful on practically everything with a few exceptions on select issues. No, this is not a free pass for a Democrat to simply affirm their Not A Republican status and have whatever they do go uncritically accepted.

Individuals and organizations are perfectly capable of deciding which candidates merit what kind of support while as an overall force engaging in more definitive agenda-setting. The right uses (insert event here) to talk about (insert one of their issues here) all the time. There’s no reason progressives can’t do more to use legitimate access points like, say, the ongoing HSBC scandals to elevate questions about the Justice Department’s application of the “collateral consequences” doctrine to megabanks or the need for a fee on financial transactions within the Democratic debate.

The usual argument against progressives more assertively doing this is that it undermines party unity. This claim has even less to it than the similar assertion that a long nomination fight would spell disaster for Barack Obama, Hillary Clinton and hopes for a Democrat in the White House circa 2008. The specter of a substantive fight jeopardizing unity and therefore electoral victory has already been raised by people like Steve Rattner, a lead member of the Wall Street wing. Rattner conflates operational unity among the groups that make up the Democratic voting and activist base, which is important, with the struggle for influence between what Thomas Edsall aptly summed up as “the money wing” and “the voting wing.”

Party unity is a curious concept for the self-identified “New Dems” to appeal to considering that during their rise to power New Dems labeled minorities, women, the LGBT community, working people in unions, seniors, environmentalists and others “special interests” to be grouped in with “cause-orientated” Democrats and pushed aside. This was done while elevating the financial sector to the hallowed place within the party establishment from which it now delivers edicts for everyone else to be super nice to them. Note that Rattner’s highly selective brand of party unity was not enough to prevent his key support of Reshma Saujani's unsuccessful 2010 primary challenge to New York Congresswoman Carolyn Maloney, who Rattner deemed insufficiently deferential to finance’s interests.

It’s not difficult to see why Democratic activists are organizing around the Massachusetts Senator with the Oklahoma-tinged accent and the Minnesota issue profile. She is adept at making plain what entrenched interests would prefer seem prohibitively complex. Warren’s supporters generally pride themselves on making a real effort to be substantive so there’s reason to think the draft effort could shift into a formal effort to put her issues at the forefront of whatever kind of Democratic primary takes without losing too much steam.

As we’ve already seen on a number of economic policy fights, Warren can be plenty consequential right where she is in the Senate. However, if a future Hillary Clinton Administration can not abide the thought of reporters rushing to Senator Warren first to get her take on Clinton’s proposals (and they would) Clinton could ask whether Warren’s disinterest in the Executive Branch extends to the cabinet. Specifically, Treasury Secretary. Just hearing the words “Treasury Secretary Warren” is liable to make the Grey Poupon hit the fan in the headquarters of Wall Street power brokers. Perhaps they should learn to compromise. In the (Bill) Clinton and Obama Administrations the role of Treasury Secretary was filled by Lloyd Bentsen, Robert Rubin, Larry Summers, Tim Geithner and Jack Lew. That list is a bit like an alphabet that spans all the way from R to U. If the Rubin school wants to argue that finally having a Treasury Secretary who is closer to J is too much to ask, that’s on them.

Of course any advocate is going to prefer a candidate who is already with them to one they have to spend a lot of time and energy moving. Even in our system, with its myriad chokepoints making positive legislative change difficult barring a trifecta of partisan control, this is a non-trivial difference. But the victories that coincided with and then served to reinforce the rise of power centers within the respective parties (1932 and 1964 for Democrats, 1980 for Republicans) are not the only way for an intraparty power rebalancing to take place.

Efforts to add to the ranks of the Warren-Sherrod Brown wing in the Senate have begun in earnest and there is cause for guarded optimism. Not that economic issues are the only set that matters but Senate races in California, Wisconsin and Ohio are on track to produce solid nominees on this front. Illinois, Pennsylvania and Maryland are still more of an open question but Donna Edwards, in many ways the embodiment of the “Better Democrats” ethos, is running in the Free State primary with strong backing from progressive groups.

As far as Congressional Democrats overall go, much of the infrastructure for a modern version of the Democratic Study Group or an institution that would function in a similar way is already in place.

On the presidential level, candidate Clinton could be pressed to adopt ideas raised over the course of the Obama Administration that have yet to reach their full potential. In the first 2 years of the Obama presidency there was some talk of a bulked-up, more independent version of the Middle Class Task Force. Last year the White House held a Summit on Working Families. Why not aim to establish a running, more influential institution modeled on either? Staffing and level of independence would go a long way to determining whether a longer-term entity would become a means to co-opt progressives or a counter to any advisers from the Robert Rubin school, but that now is the best time to litigate all of that. In recent years we’ve seen the money wing get the Bowles-Simpson and Immelt Commissions created and then stacked to its liking. It’s time for the voting wing to be heard at a volume that is at the very least equal to that of the most wealthy within the party.

As all of this falls under the rubric of electoral politics or inside issue advocacy, it would be remiss to leave out the force that has proven just as vital to any progressive change: outside progressive social movements. We probably can’t make exact predictions about when these movements will emerge, but we can be on the lookout for them and be ready when they make their presence known.  It’s safe to say that what whatever comes along will be imperfect and almost certainly an affront to the sensibilities of the Very Serious in style as well as substance.

A fiercely contested 2016 primary would certainly be healthy and helpful. Yet if one never materializes it does not leave progressive populists without recourse. At the dedication of his presidential library Bill Clinton said that “Progressives, at their very best, tear down walls that should never have been built.” The former president should let Robert Rubin and company know that they’re standing on one. Regardless of what either of the Clintons do, economic progressives can and should live up to what we can be at our best. The wall of Rubinite domination of Democratic economic policy is coming down, brick by brick if necessary.