A writer walks into a bank: Facing the financial fallout from a life dedicated to art 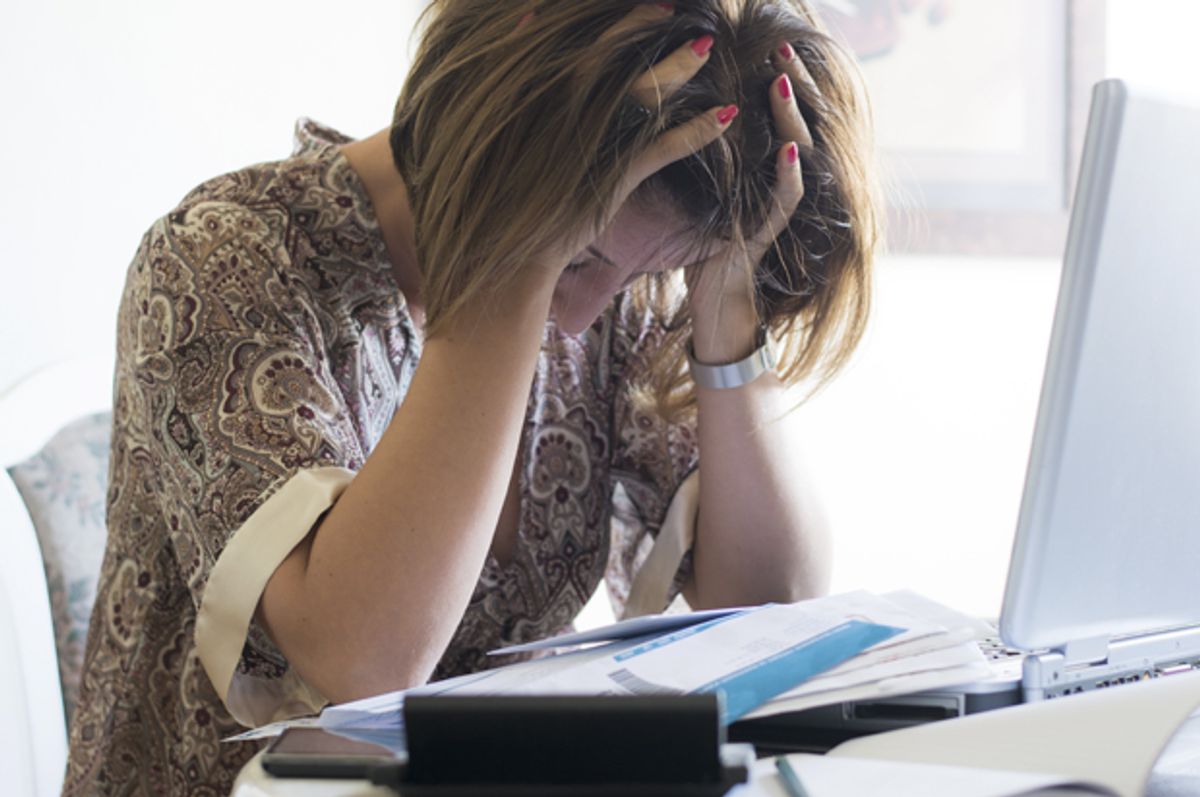 The mortgage broker is very polite and very young. He grew up in town and graduated high school a few years ahead of one of my kids. His initial questions regarding the refinancing of my mortgage all have to do with the house. I intersperse my recitation of the relevant specs — year built, square footage, lot size — with a thoroughly irrelevant story about the house across the road from mine. “It once belonged to Wally Cox.” Of course, Wally Cox is every bit as familiar to him as, say, Archibald Cox. I explain that Wally Cox was an actor, and that he and Marlon Brando were best friends. “Old timers in town say Brando was a frequent visitor.”

The mortgage broker brightens, nods and smiles, and I lapse into a feeling neighboring on ease. Until we get to the income information section of the loan application.

I don’t answer right away, so he rephrases the question. “Where do you work?”

Instead of saying, “Nowhere, everywhere, depends on the day,” I reach into the accordion file on my lap. As I place my recent pay stubs beside the calculator on his desk, I’m reminded of nothing so much as turning in homework in grade school, my response to what has been asked of me, always disappointing and frequently incomplete. I want now what I wanted then, a chance to explain, and I wonder for at least the hundredth time in my life why official documents don’t provide a space for the real story, maybe a section labeled, “the narrative of particular circumstances.”

The mortgage broker is quick with the calculator, but he pauses now, as he fingers the pay stubs from my teaching jobs at two different universities.“You’re employed by ... both these places?”

“Well, part-time,” I say. “Long-term, part-time. Five years at one place, 11 years at the other.” I leave out the information that my employment is marked off in semesters, and some semesters only one of these two universities is desirous of my services. And, at any time, the permanent deletion of my name from the course catalog at either or both is a distinct possibility.

He asks for a copy of my most recent tax return. Flipping to the Schedule C, he says, “ This self-employment income —”

“Well, that’s different every year,” I say. I don’t tell him that the number he’s looking at is actually on the larger side and that if we were to flash backward or forward we would be talking about even smaller numbers. Instead, I sit very still, reminded of my grandmother’s fake passports and doctored identity cards as she bobbed and weaved her way across Eastern Europe’s ever-changing borders. My grandmother’s best stories always included the breath-holding moment in which the papers were about to be discovered as forged and her access to freedom denied. Get a grip, I tell myself. It’s not life or death. It’s only money, which is something my grandmother often said.

“What’s the self-employment income from?”

“Freelance editing,” I say. I could add that once every five or 10 years I sell a book, but I don’t want to go down that road. I don’t want him to ask me what I write, because I don’t want to say novels, and then have to go further when asked what kind of novels. Here now at the bank, I’m about as eager to say, “realistic fiction,” as I am to say, “it’s only money.”

I remind myself that most people do not enjoy asking for loans, that few people relish being reduced to their net worth. With each depression of the calculator’s keys, I recall all the times when I’ve been told I live in a financial dream world. In the past, meaning when I was younger and secretly married to the idea of some budgetary deus ex machina, I defended myself from accusations of financial immaturity by saying that making art is inherently optimistic, and optimism can always be dressed down to look like naïveté. But now in late middle age, with my house in the balance, the house in which I raised my children and raised myself, I feel defenseless. For years I’ve been telling students in my writing workshops that making art, writing without regard for the commodification of that writing, is not something this society tends to applaud, yet writers are necessary. Writers are the emotional stunt dummies of our society (this always gets a nervous laugh in class). Here now at the bank, in the capital of capital, it seems delusional to have thought I might insulate myself from the values of the prevailing culture. Maybe underearning writers are simply the dummies of society.

Once, when confronted by some fiscal lion at the gate, I made a big wet speech worthy of "Norma Rae" or "Mr. Smith Goes to Washington," something on the order of “not everyone can be a lawyer or a doctor or an investment banker, some people need to be artists, and this is what it looks like when an artist files her tax returns, this is what the numbers look like.” I’ve rehashed the speech a number of times, for particular family members, friends, lovers, but no one, with the exception of a few other struggling artists, has ever been much moved by it. This afternoon, those words and the ideas behind those words, are barely comprehensible to me. It takes an enormous amount of fortitude, egomania and denial to cross back and forth daily from the mainstream to the marginal. Now I want nothing more than to assimilate, to cast off my mother tongue and learn, if possible, the language of solvency. I want to stand up tall when the bank comes around with its yardstick. I do not want to be found lacking.

“O.K.,” the mortgage broker stands from his chair and comes around to the front of his desk. “I think we’re all set for the time being. This goes to underwriting, and then I’ll be in touch.” He smiles and shakes my hand.

Driving down Main Street in the dark, I consider things from the bank’s point of view and suspect that my house and the wooded lot on which it sits, this real estate, may look like the most real aspect of my life. But who’s to say that the goods and services I provide, including the made-up stories no one has requested or is eagerly awaiting, are not equal to my sturdy, old house perched at the edge of a dense and mysterious woods. The system for determining worth and value strikes me as terribly strange, and it occurs to me that it just might require a suspension of disbelief. Luckily for me, I know something about that.

Rachel Basch is the author of "The Passion of Reverend Nash" (named one of the five best novels of 2003 by The Christian Science Monitor), "Degrees of Love" and "The Listener," out now from Pegasus Books. She currently teaches in Fairfield University’s MFA Program and in the Graduate Liberal Studies Program at Wesleyan University.