Daniel Franzese on HBO's "Looking": Finally, an HIV-positive character living in the here and now 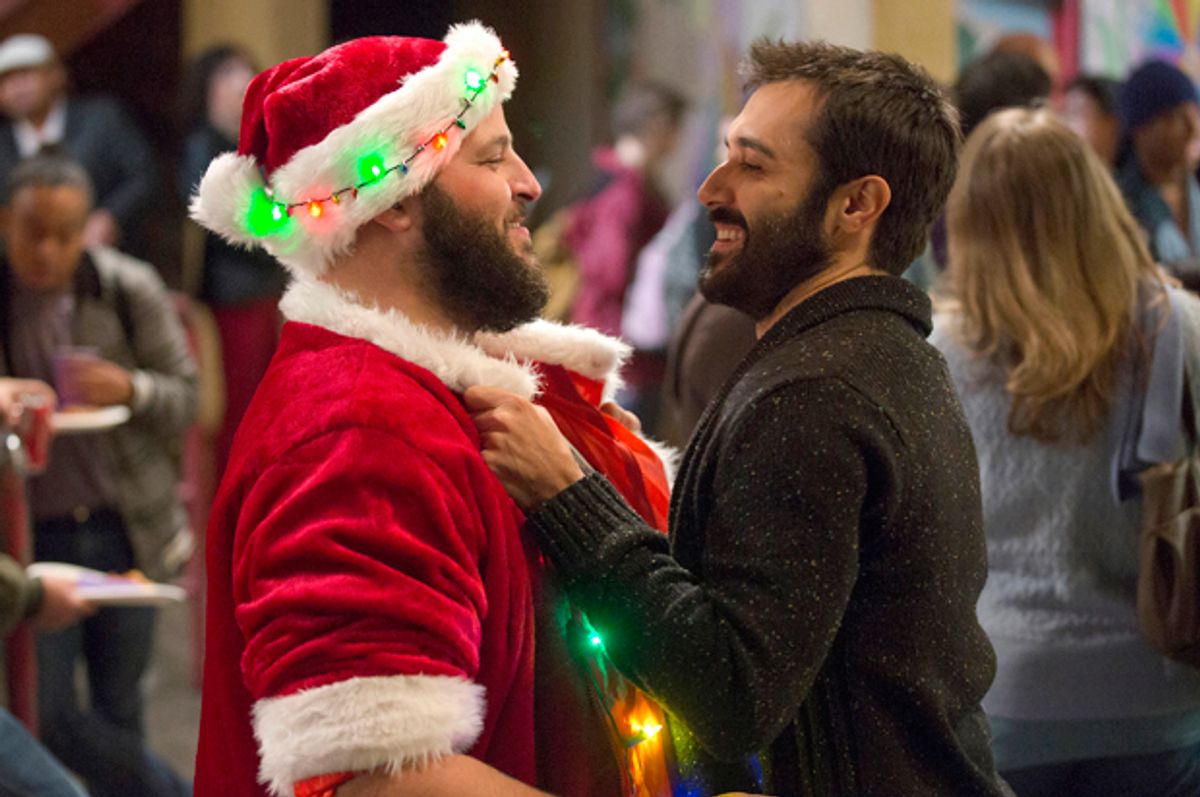 Most films and TV shows made in recent years that address HIV are period pieces. HBO’s “The Normal Heart,” from last year, is an adaptation of a 1985 play that starts its storytelling in 1981. “Behind the Candelabra,” made in 2013, ends with Liberace dying of AIDS in 1987. The Oscar-nominated 2009 film “Precious” was based on the novel “Push,” published in 1996; the similarly lauded “Dallas Buyers Club” (2013) is set in the mid-‘80s, and the script was first drafted all the way back in 1992. Whether it’s remakes of milestones in activist theater, like “The Normal Heart” and “Angels in America,” or a new depiction about a past event, like “Dallas Buyers Club” or last year’s British dramedy “Pride,” the implication is the same: The time when AIDS mattered is in the past.

Except on HBO’s original series “Looking,” a half-hour slice-of-life show about the gay male community in San Francisco. (It’s worth noting that outside of HBO, television would not be saying anything about AIDS at all; both TV movies above are also from the network.) This season, one of the show’s protagonists has met and fallen in love with an HIV-positive man named Eddie, played by Daniel Franzese (who before this role made his reputation on the iconic 2004 film “Mean Girls”). The second season, which concludes Sunday night, has charted Eddie’s romance with Agustín (Frankie J. Alvarez), following the ups and downs not just of their commitment to each other but of the particular issues linked to a mixed-status relationship—the rhythm of drug dosages, the technicalities of precautionary measures, and of course, the anxiety of possible infection.

Eddie stands very alone. The last character on television to be HIV-positive in their present-day timeline was Ron Rifkin’s character Saul Holden on ABC’s “Brothers and Sisters,” in a story line that unfolded from 2009 to 2011. Before that, Adam Brody had a role in 2009 on FX’s “The League” as an HIV-positive character whose status is played up for laughs (the self-absorbed protagonists wonder if his medication makes him better at fantasy football than they are). In the past decade, the number of HIV-positive characters on American TV is so small you can count it on one hand, depending on whether you count animated characters (“South Park”) or teen soap operas (“The Best Years”).

“Looking” offers a very rare portrait of modern-day infection, one overlaid with both worry and a great deal of hope—Eddie is living a life that would have been unthinkable for most HIV-positive people just a few short years ago. I sat down with Franzese, who is himself an ambassador for the Elizabeth Taylor AIDS Foundation, to talk about the unique challenges of playing an HIV-positive character who is in the process of falling for someone negative.

What is very poignant about this story line is this very terrifying disease lurking underneath what is otherwise the stuff of regular life— breakups and making up and going out and whatever. It’s a challenge to translate both the run-of-the-mill concerns and the very real, dangerous stuff, and a lot of that has come through in your performance.

I have such a gracious scene partner in Frankie J. Alvarez. He really was just as committed to telling this story as I was, and telling our [characters’] identity as a couple. We knew the potentially shielding effect that this would have on audience members; I definitely think people who aren't in this sort of mixed-status relationship could still take away from a romance from this but what I've been most happy about is the response that I've gotten from people who are in mixed-status relationships who have seen this.

I think just in general, regardless of status, everybody feels sometimes that they're in a position where something like that in a relationship is a deal breaker. People have a little trepidation sometimes letting their heart let go, for some reason, and I felt this story line would have to be a mix of that and this issue, but in every relationship, everyone has something that makes them hold back.

I just came back this weekend from being a special guest at this bear convention, Texas Bear Roundup in Dallas, and so many people would come up to me privately and say, I'm positive and my partner is negative and I can't tell you how many times we've had a scare or how many times I've been through that with other men.

The feedback that I got was, I wish I could've watched this season with my partner when we first started liking each other, so we could have had an idea of the things we might encounter. I would know how PrEP can help and how it's natural to be afraid sometimes, and how to deal with that. I think watching that play out is going to help a lot of couples in the future.

I'm going to have to ask you about that Texas Bear Roundup at some point in the future ...

(Laughs.) They call it TBRU.

Watching the show, I was surprised to discover how outdated my own understanding of living with HIV was. I had no idea just how possible it was for a mixed-status couple to date—I didn’t know about PrEP, either, before “Looking.”

See, I'm so glad you said that. I'm about to get real, like, Norma Rae passionate on you right now. Even though I have a friend who's HIV-positive and I was playing an HIV-positive character, it wasn't until I had gotten the script that I realized that people who are HIV-positive only take one pill. I still thought it was the cocktail situation that ended in the early ‘90s.

I'm 36, and when I grew up, I learned about HIV through television, from very special episodes of “Punky Brewster” and “The Golden Girls” and “The Facts of Life.” It was a very popular hot-button topic in the '80s and mid-'90s to portray people with HIV on television. And infection rates were steadily declining as we were seeing those roles on television. But now that that's been absent in character story lines—once we moved on to other topics like alternative families and the big trans movement that we have now—the infections have risen back up and have plateaued. It's crazy. The information Hollywood has is outdated.

I had no idea.

It's a problem. If I'm an educated actor who wants information about playing an HIV-positive character and I don't have all the information, and you're an educated writer who's interested in writing about the topic and you don't have all the information, imagine the person who's ignoring the problem. We really need to start reeducating people. We have the tools right now to stop 96 percent of new infections, if we use them.

We need to get over the fear and the stigma of infection that's happening by creating more characters like Eddie and more relationships like Eddie and Agustín. We need to educate people about tools like PrEP, which has been used for 10 years as part of the cocktail to help people who have HIV not transmit it, but is now available to the public. It's for straight people; it's for gay people; it's for people with HIV and people without.

It was fascinating to see Agustín go through the process of deciding to take PrEP, as well as seeing all the characters discussing how they wanted to incorporate that into their lives.

I think there's a misconception in the gay community— just from conversations I've overheard— where people think that people who take PrEP are more promiscuous. There's also a misconception in the gay community that some people are taking PrEP and then not using protection anymore. And that's not really what it's for. PrEP isn't a miracle drug, but it can be if it's combined with safe sex. It really should be something that everyone takes. If everyone took PrEP, HIV wouldn't be around in 40 years. That's a really powerful thought.

Where does your passion for this cause come from?

One of my best friends, Ryan, is HIV-positive, so when Andrew [Haigh, showrunner of “Looking”] first offered me the role and told me that the character was going to be living happy and healthy and just happened to have HIV, I knew that that would be very liberating for a lot of people. So I jumped at the opportunity. It wasn't challenging or awkward. As a matter of fact, I felt it an honor to be able to represent such an underrepresented and sometimes misrepresented population. I had been looking for ways to get involved with the Elizabeth Taylor AIDS Foundation previous to this—and then I get offered the role of Eddie, who happens to be HIV-positive, and a light went off in my head. As soon as HBO was able to announce that my character was HIV-positive, I called up Quinn [Tevey, Elizabeth Taylor’s grandson]. Now I'm literally dedicating every waking moment of my free time to the Elizabeth Taylor AIDS Foundation in order to help get the word out there.

As I started researching Elizabeth Taylor, her legacy began to inspire me immensely as well—how she dedicated her life to this and how much she has done, especially, to help the gay community. I decided I was going to go into playing Eddie with a little bit of Elizabeth Taylor's legacy.

That's a good role model to have, I think.