Dear straight people: Stop calling my boyfriend and me "cute"

Homophobia comes in many forms. As I held my boyfriend's hand on a walk through the park, I learned a new kind 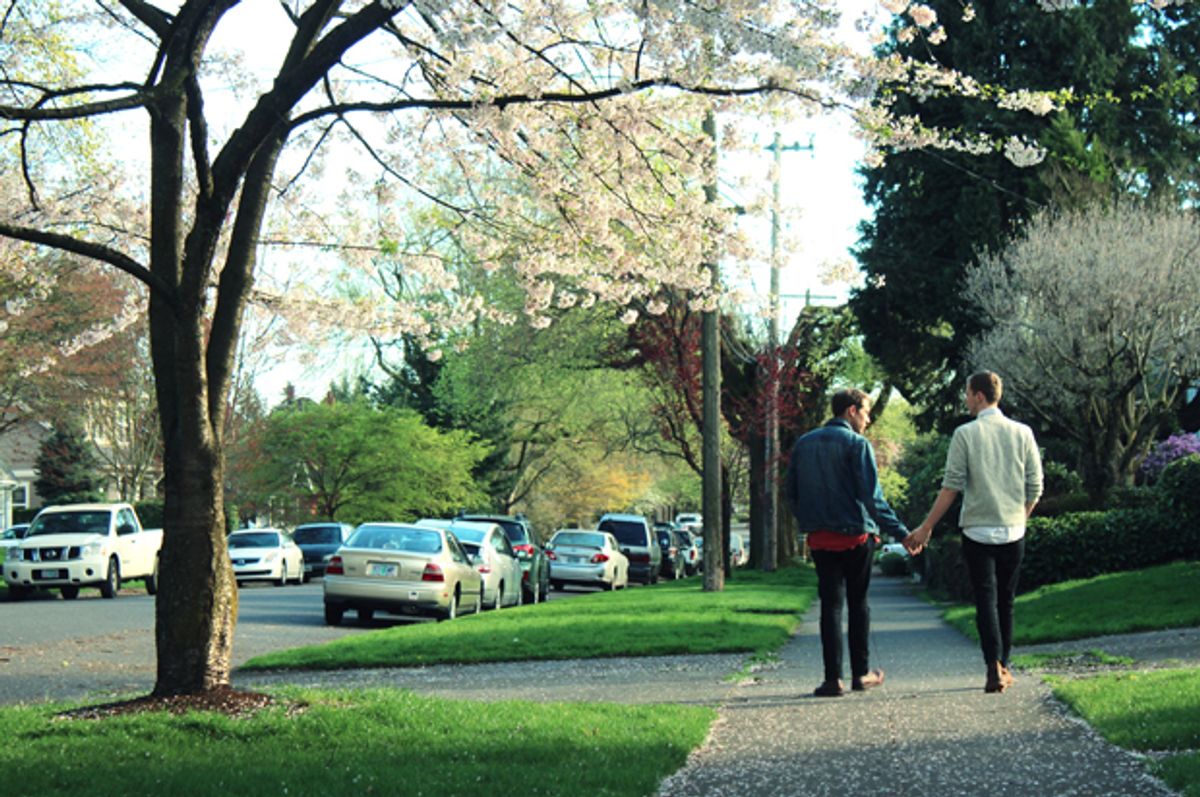 A photo of the author with his boyfriend (Katerina Solomanjuk)
--

It was an unexpectedly sunny afternoon in Portland, Oregon, and my boyfriend and I had just finished our traditional Saturday brunch. We were walking down Hawthorne Avenue, holding hands, when a young heterosexual couple started shouting in our direction.

“Hey, you two,” the guy yells as he approaches us. “You show that man-on-man love!”

Confused, I look around to see if he might be talking to someone else. But since we’re the only gay couple for blocks, it seems he’s addressing us. It becomes unmistakably clear when he raises his hand to high-five me.

“Oh, wow, you’re hitting that,” he says, referring to my boyfriend. “Congrats, dude.”

His girlfriend — seemingly proud of her bro-ish boyfriend’s act of approval — chimes in. “You guys are so fucking cute,” she says in an all-too-expected Valley Girl accent. “It’s so cool to see two guys in love,” she adds as she clenches her boyfriend’s hand. And then, within a moment, they walk away.

Not sure of how to process what just happened, I stare at my boyfriend. We both pause for a moment, nervously laughing as we try to make sense of the incident.

I’d like to make one thing clear: When I hold my boyfriend’s hand, I am not trying to draw attention to the fact that I’m gay. The act of two men holding hands in public may be tinged with politics, but I never intend for this mild display of affection to prompt debate about the nature of homosexuality. I simply want to show my boyfriend that I love him.

When it comes to gay relationships, publicly displaying physical affection can often seem like navigating a land mine. And a thing as simple as holding hands seems to attract lots of negative attention — everything from disapproving stares to disparaging slurs.

The two of us have been victim to quite a few homophobic attacks: We’ve had drunk packs of bros film us making out. We’ve had guys yell slurs in our face as we’re walking through downtown Portland. We’ve experienced countless sighs and awkward stares. And in each instance, my reaction is typically the same: heartbeat starts racing, palms get sweaty and I begin mumbling, trying to find some understanding for why so many people feel the need to voice their hatred of our sexuality.

To my surprise, I find that my reaction to this covert episode matches how I’ve reacted to more obvious acts of homophobia. This confuses me, and I wonder if I’m being overly sensitive. On the surface level, the things this couple said do not seem particularly offensive. In fact, you might even say their fault is loving gays too much, and their crime is one of social inappropriateness rather than homophobia. But, as you dig a bit deeper, you realize there’s a legitimate reason I am upset.

Homophobia comes in many forms — some violent, some aggressive and some apparently flattering. Since the media focuses on the most visible and violent kinds, many believe that something is not truly homophobic unless violence is involved. But even when lives aren’t threatened, the homophobia is still real. And often, these episodes are just as upsetting as overt acts of hatred.

It comes down to the fact that all homophobic incidents are an act of othering. It’s heterosexuals making a point to classify all homosexuals as “not one of us.” And while this couple loudly voiced how OK they were with homosexuality, such actions of over-approval aren’t as innocent as they seem. This is because true acceptance is about treating everyone as if they are equal human beings, regardless of sexuality or gender. And calling attention to someone as different, even in a seemingly positive way, does nothing to further the cause of equality.

What’s even more unfortunate is that this isn’t an isolated occurrence. In the six months that I’ve dated my boyfriend, I can recall nearly half a dozen such episodes. And when I survey other gay friends, their experiences mirror my own.

While this amounts to mostly anecdotal evidence, and no quantitative research currently exists, the principle holds true: Heterosexuals who consider themselves advocates of LGBT rights should be more reflective when they call out someone for their sexuality. It’s not just a matter of etiquette; it’s about the value we place on people we perceive to be different.

As the couple walks out of sight, their bodies appearing as specks in the distance, my boyfriend breaks the silence. “Do you think they react to every gay couple that way?” he asks, a sarcastic grin on his face. “Damn, that would get exhausting — especially in Portland.”

Laughing together, we clench hands a bit tighter than before and start walking toward our favorite café to get a much-need caffeine fix to kick the after-brunch food coma. Sure, homophobic incidents may be a regular occurrence for lots of gay couples, but we’ve found you can’t let that spoil the mood — especially when we’re this cute.

Jon Shadel is a writer and editor in Portland, Oregon, whose work appears in The Washington Post, VICE, them., The Atlantic CityLab and many others.