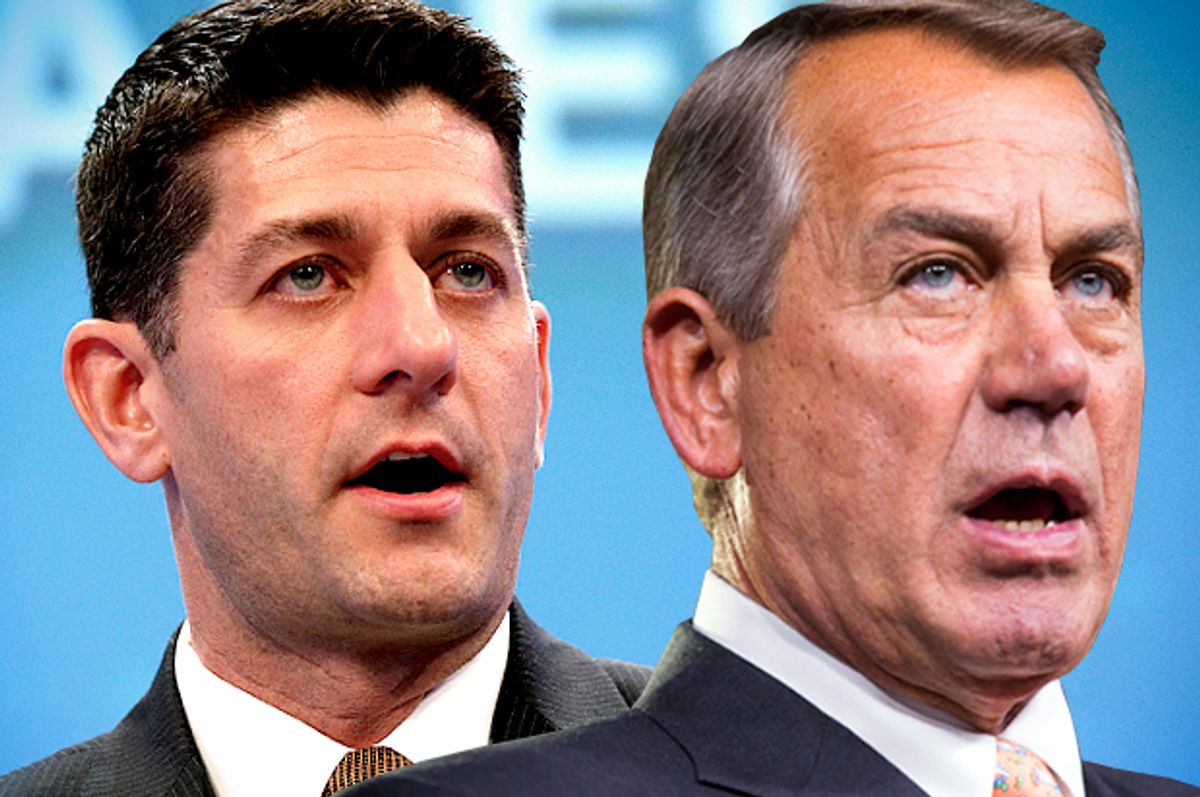 Republicans in Congress proposed their budgets this week. You don’t want to know about them, yet there are things you should know. You should know, for instance, that what I just wrote isn’t true: No actual budgets were proposed this week. A budget details what you plan to do, how much it costs and how you plan to pay for it. The Republican "budgets" do none of that. They’re like Captain Jack Sparrow’s pirate’s code -- “more what you call just guidelines” -- and really, not even that.

Republicans say any such criticism is unjust, that in the chutes-and-ladders game of federal finances, budget committees don’t write budgets. Oddly enough, it’s true. Budget resolutions merely set standards for later processes known as authorization and appropriation. You’ll be glad to hear I’m not writing about those today, except to say members of Congress who prattle on about government duplication might ask why authorization and appropriations committees can’t set their own standards.

Congressional budget resolutions grow less useful -- that is, vaguer and more politicized -- each year. What’s striking about these is that their drafters have no intention of ever telling us what’s in them, what they’re really up to, or who really pays. They mean to get through the entire process--authorization, appropriation and, most important, reelection -- without anyone ever finding out. A few examples:

* Naturally, both the House and Senate budgets repeal Obamacare. That eliminates a trillion dollars of revenue over 10 years but neither budget acknowledges the loss. How do they do it? Since it can’t be done, they can’t say.

* Both budgets end Obama’s Medicare cost controls but claim his 10-year savings of nearly half a trillion dollars anyway. How do they do that? Again, they can’t say.

* The House budget turns both Medicaid and the Children’ Health Insurance Program into a block grant. House Budget Committee chairman Tom Price, a doctor, mouths platitudes about streamlining and federalism, but his goal is to provide the poor less care and let the states take the heat. How much less care? The whole point of the exercise is to avoid answering that question.

* The House would privatize Medicare, though it doesn’t say how far it will go. Republicans don’t like the word "voucher" because older people know what it means. The Orwellian newspeak they insist on using instead calls it a “premium support model.” The surefire effect of "premium support" will be to increase out of pocket expenses for Medicare beneficiaries beyond their current world-record holding levels. Republicans say it will incentivize savvy octogenarians to cut themselves a better deal in the private insurance market; perhaps over the phone, or better yet, online.

Some call the House budget more radical than the Senate’s. It’s true with regard to defense, where the House ladles out nearly $40 billion on top of what both Obama and the Senate seek, which is itself a hefty hike over current spending. To do it, the House brazenly violates the legally binding defense sequestration cap by the cheap ploy of putting the money in a magical "off budget," "emergency" account. Credit Senate Budget Committee chair Mike Enzi for refusing to go along, thus setting up what looks to be a fierce intraparty fight between deficit and defense hawks.

Defense aside, the only difference between the two Republican budgets is that the House spells out actions the Senate also necessitates.  In addition to the above list of horribles, both would slash food stamps by $125 billion or more and make deep cuts to Pell Grants, aid to cities, early childhood intervention programs; anything they can find that helps anyone in real need. On the revenue side, both eliminate tax credits for the working poor while holding the rich harmless.

The human carnage contemplated by both budgets is beyond accounting. Robert Greenstein of the Center on Budget and Policy Priorities is a liberal-leaning analyst lauded for his impeccable methodology and mastery of fiscal policy. Greenstein estimates that two-thirds of the cuts come from the quarter of the budget that serves the poor and working poor. A man known to measure his words, Greenstein says it would leave the government a “shell” of its former self and make America a “coarser and less humane nation with higher levels of poverty and inequality.”

Even after slashing non-defense discretionary spending to its lowest level since World War II, Republicans can’t achieve a balanced budget-- the holy grail of their rhetoric, not their policy—without resorting to something called "dynamic scoring." In essence, dynamic scoring means that in projecting future revenue and spending you take into account the effect of your budget on your economy. All large budgets make measured bets on the economy but what Republicans do here is much more dangerous, and also dishonest.

On purely ideological grounds they say that overnight their unholy combination of miserly spending cuts for the poor and profligate tax cuts for the rich will juice economic growth by nearly 50 percent, unleashing a cascade of revenue. It’s faith-based accounting based on supply-side economics and it’s never worked. But in the spirit of Florida Gov. Rick Scott forbidding state officials from uttering the words "global warming" and "climate change," the Republicans have ordered their formerly non-partisan budget analysts to apply the theory. It’s how their whole budget works; like a sleight of hand street hustle, a shell game with no pea.

The Republican budgets afford Democrats yet another chance to seize the moral high ground and recast the political debate. The last chance came three months ago when Republicans hid provisions to gut laws regulating campaign finance and Wall Street speculation in a budget bill before a lame duck Congress. They got away with it because Obama and key Senate Democrats got other Democrats to go along. As no one can say when the next chance will come along, it’s imperative that Democrats seize this one, but the early signs aren’t good.

Democrats shun any debate that appears to entail even slight risk. Think about it. Republicans are engaged in not one but two spirited public debates. One is being held among a bevy of presidential aspirants of all conservative sizes and shapes. (Just this week the formidable Ohio Gov. John Kasich tested the waters.) In Congress, minor differences may trigger open warfare among members, all of whom we’d deem, by standards just five years out of date, highly simpatico right-wing extremists.

On the Democratic side, getting Hillary Clinton to address an issue is like trying to get Miss Havisham to open a curtain and let in the sun. Presented with the gift of her seclusion, any would-be opponents can’t even get in the race. In Congress, overly scripted Democrats hurl stale talking points at a budget they could tear to shreds with logic, evidence, specificity and just a tiny bit of boldness.

It’s been this way for a while. Back in 2011 then House Budget chair Paul Ryan unveiled his first budget. Obama quickly pounced, calling it a “Trojan horse for Social Darwinism.”  To anyone who double-majored in sociology and the classics it was no doubt a stinging reproof. For everyone else, better to tell them that the Ryan budget would double out of pocket medical expenses from $6,000 to $12,000 a year for seniors living on annual incomes of $26,000.

If the Democrats, or their consultants, don’t trust us to follow the logic or do the math, then shame on them. In truth, they don’t trust themselves or us. It’s why Republican tough talk makes them tremble. After all these years of bombardment by Republican "tax and spend" rhetoric they still don’t know how to counterattack. The answer isn’t sound bites or catchphrases but concreteness and specificity.

During that 2011 budget war two major pollsters, Gallup and Pew, painted too startlingly different portraits of public opinion. Sixty-two percent of Gallup’s respondents called GOP budget cuts “about right.” Just 25 percent said they went too far. That same week the Pew poll found “not a great deal of support for cutting spending.” In 17 of 18 listed categories their respondents wanted to raise or maintain spending. Eighty-seven percent felt that way about education; 83 percent about Medicare. In the Gallup poll 60 percent wanted to slash spending. In the Pew poll 80 percent wanted to maintain or even raise it. How to explain the difference? It’s simple. People hated their government and loved everything it did for them.  Four years later they hate it and need it even more.

The risk aversion that Democrats suffer arises from the politics they practice. How they raise their money and craft their message determines everything they say and do.  In December their leaders wanted to serve Wall Street and blow another hole in campaign finance laws so they passed on the chance to redeem themselves in the eyes of a disappointed public. Pollsters tell them not to say anything people don’t already think, but you can’t be the party of change when you’ve nothing new to say, or connect with the broader public via staged performances in friendly rooms.

The Republican budget is a fiscal, economic and moral monstrosity. If Democrats can’t unmask it they don’t deserve the support of the millions who still rely on them to act as their tribunes. It is a crucial test of their leadership.  They say they need to tell a better story but what they really need to do is make a better case. If they’re too afraid, or have forgotten how, those who are less afraid and who remember how must force them to get up and fight.