"Being accused of rape is not an ideal trait in a quarterback": Jameis Winston NFL draft apologia begins 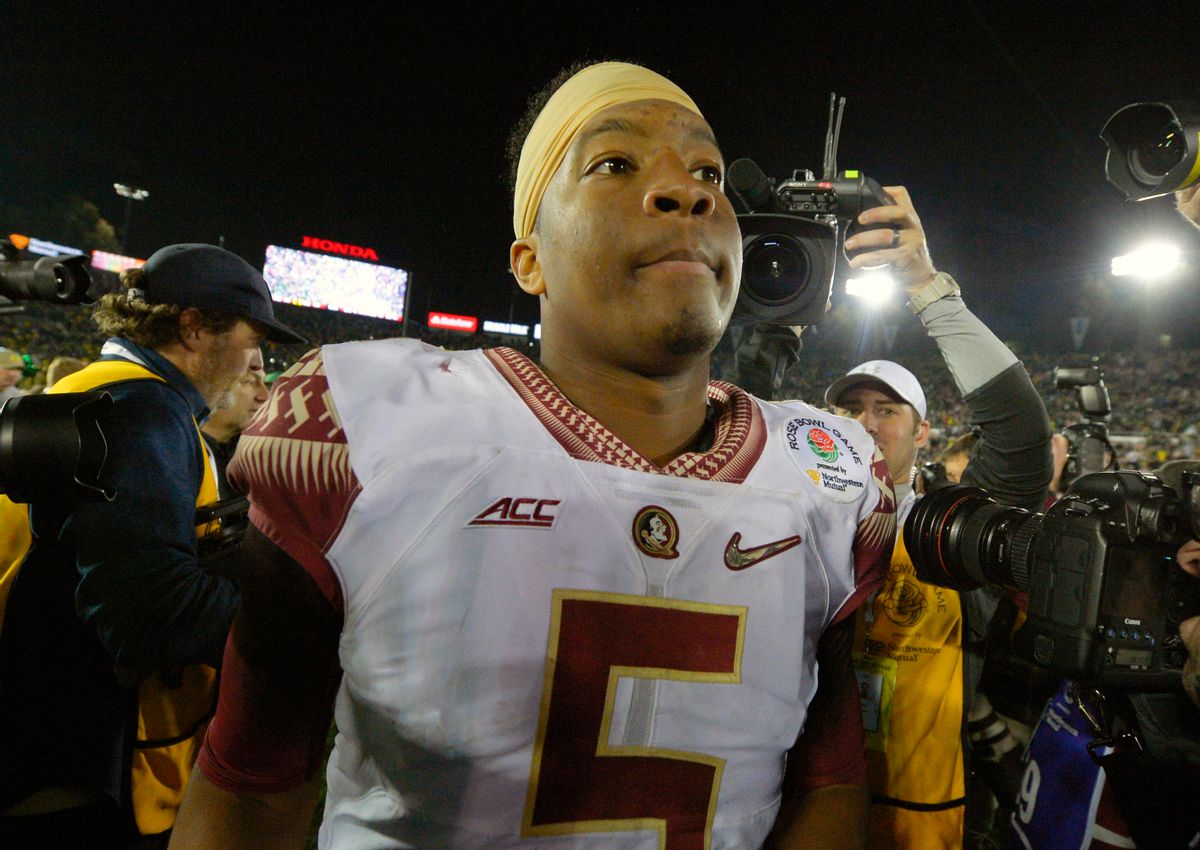 SB Nation's mock NFL draft is really, really something this year. Despite the fact that I don't know a whole hell of a lot about sports, I can say confidently that the ninth annual football writers' exercise is pretty insightful when it comes to the upcoming NFL draft, which is expected to see Florida State University quarterback and accused rapist Jameis Winston launch a multimillion-dollar career as the number one all-around draft pick.

This, of course, is what SB Nation contributor Sander Philipse predicts in his mock write-up of the draft, but that's not the insight. Instead, the draft of the draft gives us a concise example of the weird, troubling and tone-deaf ways we talk about rape.

In the write-up, Philipse and fellow SB Nation writer Dan Kadar foresee Winston will be drafted to the Tampa Bay Bucaneers. They list a few reasons for their prediction, as well as a few concerns the team might have in signing an alleged sex offender (emphasis mine):

Philipse: Right now, all the signs point to Winston as the Bucs’ pick. Coming from a pro-style system, Winston has shown all the necessary on-field traits to successfully transition to the NFL, and his ability to throw with anticipation is rare in college quarterbacks. That doesn’t mean he’s a perfect quarterback, and the off-field question marks pose a risk of immaturity. Being accused of rape is also not an ideal trait in a franchise quarterback. Ultimately, though, most reports suggest that Winston was convincing enough in in-person meetings with teams to allay any doubts about his character. [...]

Dan Kadar, SBNation.com: This is the expected pick, because it’s a good one. On the field, there are few questions with Winston’s football intelligence. He reads defenses well, and unlike most college quarterbacks, he goes through his progressions properly. He’ll really benefit from going to a team like the Buccaneers, where they have a good and established wide receiving corps.

"Being accused of rape is also not an ideal trait in a franchise quarterback." "Not an ideal trait." I feel like I need to type these phrases out a few more times in an effort to wrap my own mind around the interpretation, because this is all we're going to get by way of explanation or justification for Winston's impending, massive career success. The player has been accused of brutally raping a fellow student, and then was allegedly protected by more than one institution that views sexually assaulting someone as a sign of "immaturity," the importance of which pales in comparison to winning football games.

But it's also not so bad as to make the league question (or even renege) its decision to welcome a man who has been accused of committing gross acts of physical violence against another human being. It's not so bad as to eclipse "Winston's football intelligence" or whatever charisma he may have in real-life interactions. For the NFL, the idea that a player might have raped or assaulted a woman will never matter as much as his stats -- and the 2015 draft, and the commentary around it, will only remind us again of that reality.