Nick Kroll's too-real parodies of awful reality TV blurred the line between brilliant and awful, and I loved it 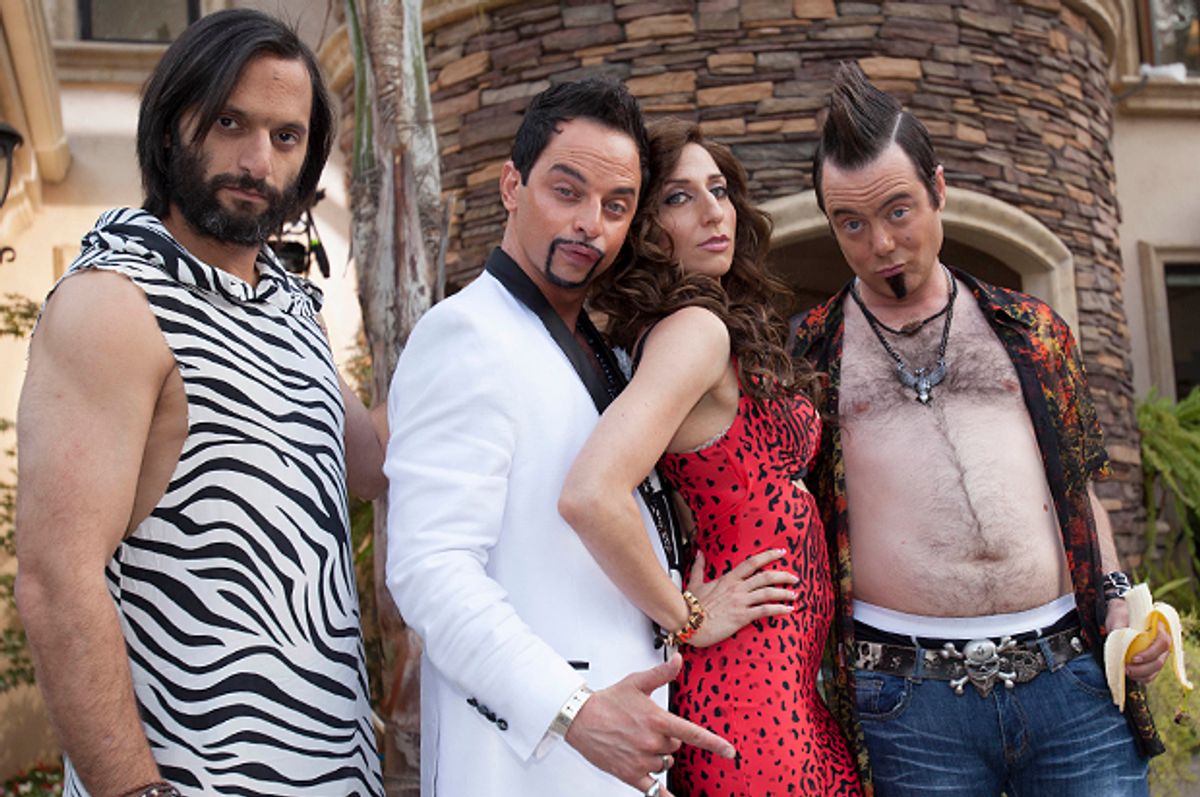 For a certain segment of the TV viewing audience, Tuesday night will mark the end of a too-short but glorious era: The series finale of “Kroll Show,” a Comedy Central original series built around the many characters, costumes and accents of comedian Nick Kroll. The show is a choppy mishmash of recurring sketches, outsize characters and loud sound effects; it’s not exactly easy to drop into. It functions as both a parody of reality television and an obsessive tribute to the form—right down to the stingers, the interstitial graphics and spinoffs of spinoffs of spinoffs.

It is also a show with nearly abysmal ratings. Last year’s season finale of “Kroll Show” got just upward of 800,000 viewers nationally—soundly beaten in the cable ratings, as you can see, by not just one, not just two, but five airings of “The Big Bang Theory” in syndication—as well as four episodes of “Modern Family,” four episodes of “American Dad,” and four episodes of “SpongeBob SquarePants” (though in “Kroll Show’s" defense, it did end up beating out four other episodes of “SpongeBob”). Even in our era of declining viewership, we still typically count audiences by the million; and unlike critical darlings like “Broad City” or “Review,” also on Comedy Central, “Kroll Show” never quite gained footing with critical audiences, either. Humor is notoriously subjective, and here, it rears its ugly head; where I am often the Debbie Downer positing that something or other isn’t really that funny, “Kroll Show” puts me in the position of being a passionate fan for something few others find quite so hilarious.

Because it’s not just that I find “Kroll Show” funny—it’s also, without a doubt the show that I end up laughing the most at. (I had to pause the episode “Karaoke Bullies” when it introduced a parody of “Cheers” called “Chairs” because I was laughing so hard; I think the last time I did that was during a “Saturday Night Live” “Weekend Update” when Andy Samberg playing Nicolas Cage was joined by none other than Nicolas Cage.) When this season opened, I tried to explain why I loved it:

Some of my affection for “Kroll Show” no doubt comes from feeling like I’m constantly trying to jam as much television as possible into my brain—the show is very aware of not just television canards but of how shows and story lines get smushed together, intercut with very shiny commercials, when they’re presented to a viewer. But then again, that’s the appeal; a show that knows what it’s like not just to watch a television show, but to watch television, with its stingers and smash cuts; its chyrons and bad transitions and cross-promotions. And on the other side of title cards and sloganeering is the ever-present human desire for fame.

It’s not impossible to see why “Kroll Show” would have trouble finding an audience—it isn’t an easy show to explain, because its humor is so dependent on the format it’s presented in. These aren’t sketches with a live audience laughing dutifully when they’re told to, while the actors—nearly wooden, half-smiling—deliver pre-written lines. “Kroll Show” has the fluidity of real life—most of the dialogue is improvised—with satire so carefully constructed that you can walk in the door, look around, sit awhile on the living room couch. It’s a whole world, imparted in just snippets of that world’s television.

Indeed, if “Kroll Show” is guilty of anything, it’s almost of doing its job too well; it can honestly be difficult to tell if the show is making jokes. Left on in the background, “Kroll Show” could very well be a TLC or Bravo or A&E programming block, and that is both the show’s brilliance and its fatal flaw. You have to really want that humor to fall under its spell—because otherwise the inanity of the characters and the frustrating absurdity of their predicaments mesh far too well with the reality television landscape as it already is.

Kroll himself is also still a marginal personality—he hasn’t quite found a mainstream audience yet, though I believe that he could. Kroll’s genius is in how fully he inhabits the personas he’s created—inhabits, and empathizes with, too. His performance of the “Jersey Shore” reject Bobby Bottleservice is infused with something like love for the character, even as Bobby loses his spot in the show “Gigolo House” (and the real house full of gigolos) because he loses a game of “Gigolo H-O-R-S-E” (which is the basketball elimination game, played with gigolos, in a spinoff series from “Gigolo House”). Kroll has a lot in common with that other televisual chameleon, Sacha Baron Cohen—a comedian who is best known for his broadly drawn characters, in part because the characters have become more real than he himself. Kroll is not a particularly well-known comedian, and partly that’s because he languishes when in an environment that isn’t his own carefully constructed hothouse.

“Kroll Show” has been that hothouse for him—and for his friends and collaborators, because one of Kroll’s other strengths is his ability to find and maintain relationships with a collection of hilarious and talented people. Everyone seems like they’re having a blast—and not in the “Ocean’s Twelve” way of a bunch of people having fun at the viewer’s expense, but rather in the way of people who are having a ton of fun doing what they’re doing, and are grateful for the chance to do any of it at all.

Unlike “Kroll Show’s" second-season finale, “Blisteritos Presents Dad Academy Graduation Congraduritos Red Carpet Viewing Party,” the series finale airing Tuesday will have a significantly more comprehensible title: “This Has Been Such an Incredible Experience.” In years to come, these three seasons might attain the cultlike status of “Arrested Development’s" first three seasons (the two do share a producer, John Levenstein, who co-created “Kroll Show”). The marginality of “Kroll Show” ended up working in its favor, too, argues David Sims at the Atlantic (who, in addition to being a longtime fan, introduced me to the show); without the pressure of a rabid fan base who needed to be fed, “Kroll Show” has had the chance to end gracefully, the way the creators wanted.

Regardless, what these three seasons of “Kroll Show” have been for me is a love letter of sorts to TV in a specific era, from people who got my sense of humor, for other people who get it, too. Sometimes what I love is what everyone else cares about; other times, it’s a weirder, narrower affection. Pop culture is weird that way. I spend a lot of my time trying to bridge the gap between the way I see something and the way everyone else does, and it’s especially difficult humor, where it’s so difficult to explain what makes a joke work and another fall flat. The end of “Kroll Show” means I have to stop attempting to explain what makes the show brilliant, which is both depressing and a small consolation prize. The point is, I’ll miss this show, which ended up meaning a lot to me; for me too, this has been an incredible experience.