"Girls": Leaning in and moving on, finally

Season 4 ends, and Hannah's start-and-stall approach to maturation might finally be gaining some momentum 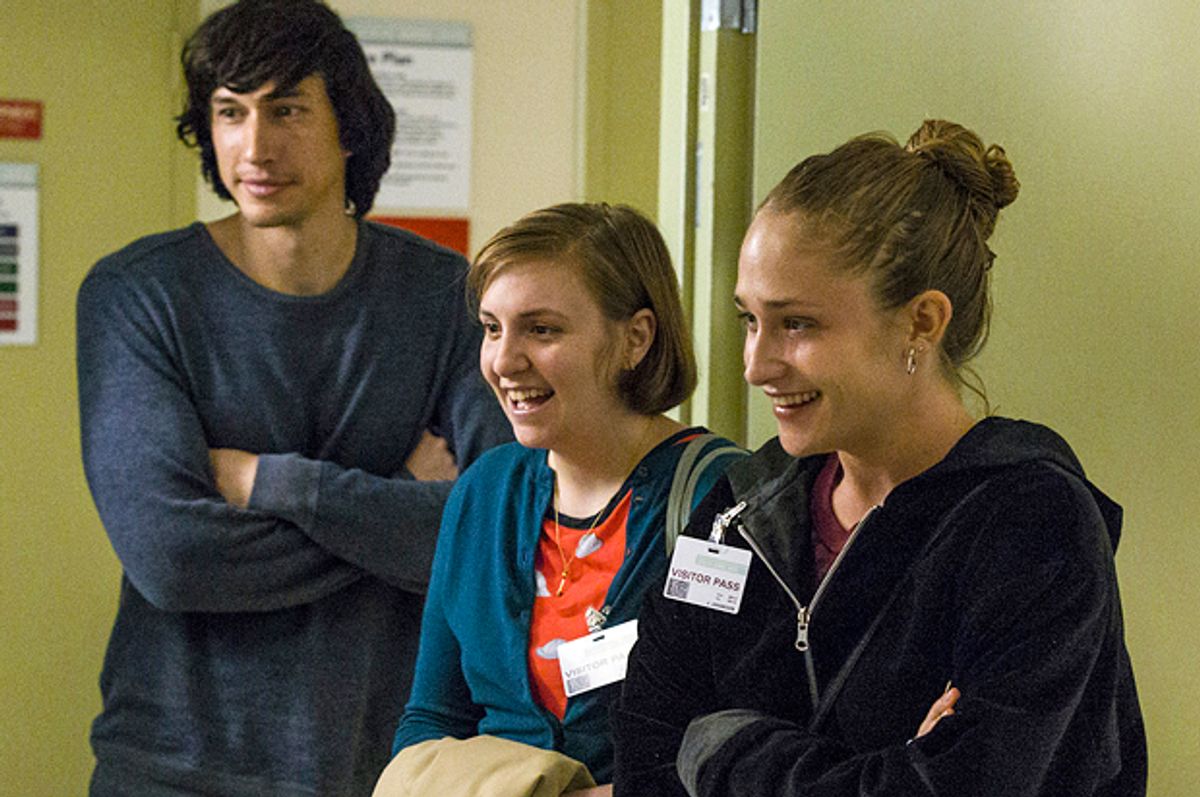 It’s onward and upward for the “Girls” in last night’s season finale. Shoshanna breaks up with a successful, handsome Harvard graduate to take a job in Japan (“Japanese is super easy to get the hang of,” her new boss promises her; the person currently holding the position is bipolar, and Shoshanna is assured, “We are going to fire her, pretty much the minute she’s on a manic upswing”). Marnie manages to shine as a solo performer when Desi stands her up for an important gig. Hannah, for her part, moves on as well — past a trite reconciliation with Adam after he and Mimi-Rose are over and into a relationship with Fran, her fellow teacher who has shown himself in earlier episodes to be both attracted to and repelled by her remorseless self-involvement. Caroline, who painfully delivers a baby in a slightly more tense version of a now-tired plot mechanism wherein a woman who insists on a natural birth winds up happy to deliver her baby in a hospital with drugs and doctors, offers a moment of growth for all involved in the dramatic birth — Jessa, Adam, and Hannah, who helpfully compares the birth to what she’s like “after I eat a big Mexican dinner.” (Thanks, Hannah.)

In all these maturation narratives, men are obviated: Shoshanna, Marnie, and Hannah are all positioned to thrive better without them. And while the advice to women to focus on their careers — complete with a shout out to Sheryl Sandberg — is welcome, it brings us back to the old feelings of unease about the implicit class message the show issues. For all of the gesticulating that “Girls” is a show about precarity as a lifestyle, once it’s all over it might just turn out to have been a show about the stumbling blocks on the upward march to success for a group of privileged yuppies — Shoshanna and Ray in business and politics, Marnie in music, Adam in acting, and Hannah (we have faith!) in writing.

If there’s one thing that remains consistent this season, it’s that Hannah Horvath is still a terrible human being. “You’re the most selfish person we know,” Elijah tells her. Marnie chimes in, “When we lived together you put the fire extinguisher in your own bedroom so you could have access to it first.” Hannah blithely declares that this was the old Hannah and that she’s turning over a new leaf — although her very remorselessness probably makes this impossible. For most of this season, with every step forward in her maturation process that Hannah took, she took two back — she left her MFA aspirations behind and embraced a future based on helping people, so she began substitute-teaching at a prep school, where she connected with her students. But that connection was a little too strong — only Hannah Horvath would think she should be best friends with a high-schooler — prompting a dressing-down from her boss for not respecting boundaries. Fran, her newest romantic interest and fellow teacher, tells her flat out: “You’re not the person you think you are.” Hannah lacks the basic mechanism necessary to catapult her into self-awareness, the modicum of self-knowledge about how she behaves towards others and how they, in turn, perceive her. She possesses no drive to change, and so perhaps never will.

And why should Hannah change? The show would no longer feel like itself if she didn’t gleefully walk around with her foot in her mouth. In the cringe comedy sub-genre, “Girls” has earned its bedrock placement, and creator and star Lena Dunham as one of its vanguards. In the highly trans-national hipster culture, it’s everywhere.  A character in a recent Pola Oloixarac novel posts internet manifestos about it. British TV shows like “Peep Show” and the original BBC series “The Office” probably pioneered it. Germans, of course, have a neologism, fremdschämen, which means “vicarious embarrassment.” “Girls,” as many commentators have observed, is the occasion for us to enjoy the shame of others like a piquant cuisine.

It’s not that Hannah is a malicious person. She rather possesses the fatal combination of a highly developed sense of self and utter oblivion to the reactions of others. This has in fact always been the logical black hole around which the rest of “Girls” orbits. After all, the tone-deaf Hannah, the struggling writer, is the alter ego of Lena Dunham, who can only orchestrate the show because she’s so tuned in to how all of the characters feel and respond to someone like Hannah. “Girls” might be the hard-won fruit of the anxiety Dunham herself feels, but that is clearly something Dunham can hold herself at a distance from so she can laugh at Hannah and issue consistently level-headed responses to her critics. Indeed, one of the central ironies that might emerge when the dust has settled around the show is that “Girls” would never have made sense if Dunham weren’t deliberately lampooning the privilege she’s accused of not knowing she enjoys.

But the show’s finely-tuned sense fremndschämen works only if we identify with the characters the way Dunham clearly does. The first episode of this season provided an echo chamber on the topic, when Marnie’s debut jazz brunch is viciously heckled. “If you’re lucky, maybe I’ll scat for you, do a little rap,” Marnie awkwardly joked. One guy, a proxy for the television audience, shouted out, “Please don’t!” The panic attack Marnie subsequently experienced only has aesthetic resonance if you can relate to the feeling of terror that ensues after you do something embarrassing. And Hannah only works as Lena Dunham’s fictional other if Dunham simultaneously casts her as a shadow and keeps her at the same distance.

Cringe comedy is the logical conclusion of situation comedy, but the naturalism of the HBO programming world requires a more complicated kind of evolution in which the character dynamics are in constant flux, just like in in the real world. This has always been a narrative shortcoming of “Girls,” insofar as the characters are so unstable that it’s impossible to chart the motivations of their constantly-shifting allegiances and affections. Shoshanna’s capricious fits of anger, Jessa’s bouts with addictions and mutually-destructive relationships and Marnie’s romantic whims all continue to come off as random and abrupt. Any balance sheet taking account of where we are now after four years of “Girls” is likely to have difficulty drawing conclusions about how far, if at all, the characters have come. A generation overwhelmed by possibility is still struggling to find a way to turn arbitrary decision-making into a good story — other, that is, than almost total capitulation to middle-upper class conformity.

At first glance, Hannah’s relationship with Adam might seem to be just as pendulous. The second half of this season, when Hannah returned from Iowa to find that Adam quickly moved on and into a relationship with performance artist Mimi Rose, bears a structural similarity to the first season: Hannah is wrecked that Adam doesn’t seem to love her like she loves him, and then, at some point, the scales tilt and it is Adam who wants Hannah, only to find that that now she has moved on.

As in the first season, Hannah’s heartbreak is rendered powerfully. This season’s fifth episode was devoted to how she processed the news that Adam started a relationship with somebody else. Her grief is idiosyncratic and convincing. She pretends to be okay, and then doesn’t; she obsessively watches YouTube videos of Adam’s accomplished new girlfriend; she avoids her friends; she pees in a trashcan so she won’t possibly run into Mimi Rose in the hall on the way to the bathroom; and she tries to confront whatever it was about herself that wasn’t good enough. Hannah’s lack of self-awareness here is not only an adaptive mechanism, it probably steers her away from an emotional whirlpool of truth, because in reality, there might not actually be anything defective about us, and if we try to find it, we might have to confront the most horrifying reality of all — that we are actually powerless.

But then, when she and Mimi-Rose spent time together, Hannah saw the best of herself in Adam’s new love interest — her creativity, brutal honesty, willingness to transgress boundaries, and vulnerability — and came the closest she’s come all season to a true breakthrough when she tells Adam him she understands why he’s chosen Mimi-Rose and she lets him go. Mimi-Rose, however, is a character for whom one can’t experience vicarious embarrassment, because she’s already hyper-aware. This awareness lends her a character trait that Hannah lacks: Mimi-Rose is manipulative, and her relationship with Adam might have just been a game all along. Last night, when Adam tried to get Hannah back now that Mimi-Rose are finally over, Hannah’s principled rejection of him constitutes perhaps the first great and believable evolution that any of the characters has undergone.

The game of mirroring empathies that Hannah engages with in Mimi-Rose — and that fremdschämen pushes us to play — turns out to be a deeply ethical one. Hannah is terrible, in the way we colloquially use the word “terrible” to describe people who are inconsiderate, but she’s not quite a bad person. And even if she were, would it make the suffering she experienced at Adam’s hands any less painful? The particular embarrassment one feels for the characters on “Girls” is a form of censure, certainly, but more primordially it derives from a sense of identification with them. We feel shame for them because they seem incapable of shame; we assume the burden they are fundamentally unable to bear. Hannah, while hopelessly selfish, is still someone for whom fans feel great sympathy. Somewhere in between cringing at her screw-ups and watching her pain, we root for her and decide we don't want to see Hannah hurt. The audacious but inevitable conclusion the show suggests is that maybe our desserts ought to be decoupled from our actions. We’re left with a radical moral proposition: Maybe any of us can be a horrible person and still be due happiness, or at the very least, deserve not to suffer.