Loathed and over-hyped: Why Ted Cruz's path to the nomination is so narrow

The first official '16 candidate, for all the attention, is little more than a niche candidate. Here's why 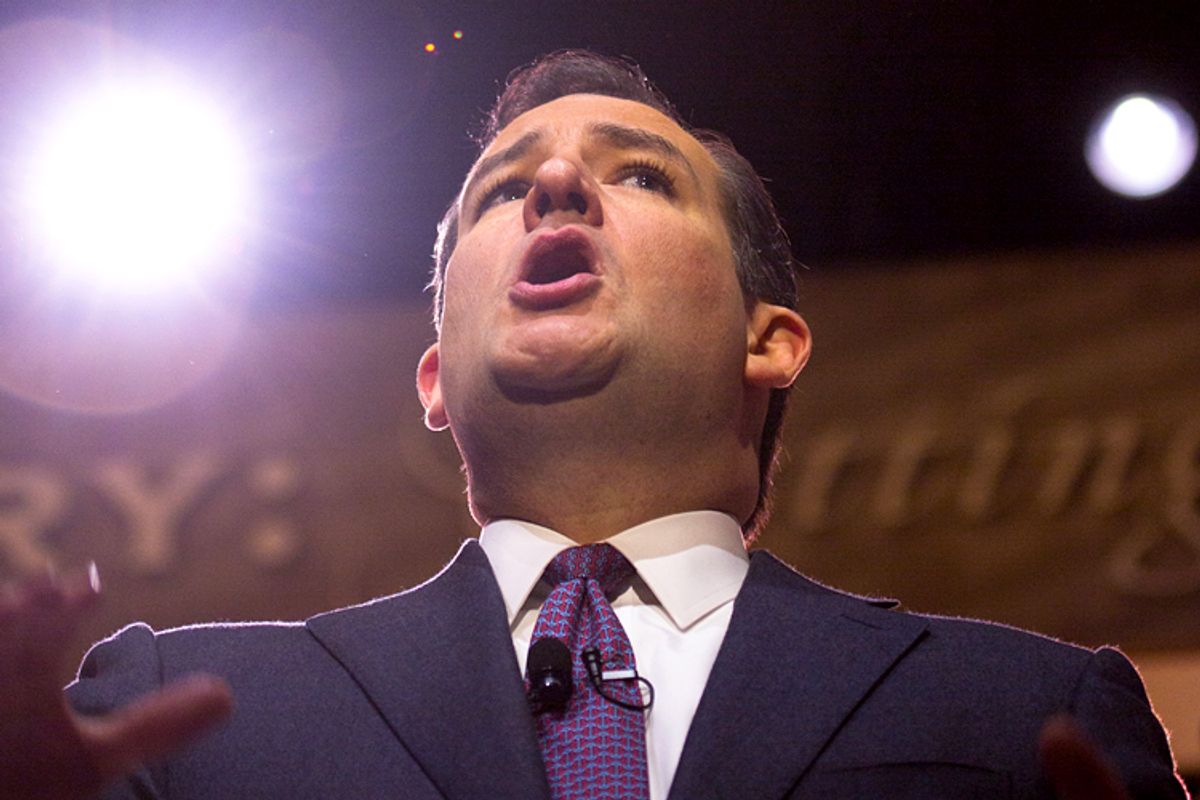 No words can describe Cruz's low-ceiling problem better than this 46-second clip from a couple of weeks ago. Cruz, like several other candidates, was speaking at a forum hosted by the International Association of Firefighters. A firefighters' union is a perfect representation of the sort of organization that a viable Republican presidential candidate must be able to appeal to. Like police unions, they're more conservative than other labor groups, but also more concerned with economic security than realizing the Grand Project of implementing a free-market utopia.

Cruz, instead of tailoring his speech to this sort of audience, offered the same zingers that he's been tossing out to enthusiastic cheers at conservative movement confabs like CPAC. There's the one about abolishing the IRS and sending all of the IRS agents to the border. Heh indeedy. The line about how there are more words in the IRS code than there are in the Bible, but the Bible is better, or whatever. "Repeal every last word of Obamacare," that's in there.

The IAFF attendees responded to these lines with stone-cold silence.

As one IAFF official told Bloomberg's Dave Weigel afterwards, "I had to take a shower after listening to that."

What is Ted Cruz's rationale for running for president? Same as everyone else's: He has an enormous ego and wants to be president. But then there's the question of what "lane" he occupies, or what his campaign will be "about." This shifts over time, depending on the political opportunities of any given moment.

Cruz rapidly established himself as a conservative star in his first year in the Senate, largely on the fiscal platform of shrinking the size of government. He approached this with Tea Party tactics, which is to say poorly tought-out tactics that never have a chance of succeeding but do get one's name in the papers. He was the face of the government shutdown over Obamacare.

Last fall, Cruz's aides suggested that he would run a "foreign policy-focused" campaign. All that really meant was that foreign policy happened to be eclipsing domestic concerns for the time being. The foreign policy vision he was hashing out attempted to be somewhere between libertarianism and neoconservatism, but a hell of a lot closer to neoconservatism. It was something about how we should definitely be militarily adventurous, with some hand-waving about how these adventures should be quick and not devolve into tedious nation-building problems. This was at once immoral (we'll destroy nations and then leave them be!) and nonsensical (there's no such thing as quick war, especially when you have hawks like, say, Ted Cruz railing against presidents who ever dare withdraw troops from a conflict.)

And by choosing Liberty University for his announcement today, Cruz presented himself as a social conservative above all else. There's no doubt he is a social conservative, but social conservatism also happens to be where the Republican votes are in Iowa, as the caucuses' previous two winners -- Mike Huckabee and Rick Santorum, both of whom Cruz will be trying to bleed support from -- have shown.

The foundation for his candidacy is fluid, depending on the news cycle and the intended audience. But that audience is always far-right conservative, no matter which peg of the GOP stool -- fiscal, social, or foreign policy -- he's addressing.

The problem with Cruz's presentation of himself as the Conservative To End All Conservatives is that he has nothing to show for it. Scott Walker bills himself similarly, and that will present plenty of general-election problems should he get that far, but he has policy accomplishments to point to. Cruz does not.

At CPAC, Cruz tested out the message that he's the conservative who's willing to stand up not just to Democrats, but to establishment Republicans as well. That he's a principled fighter, not just a talker. Cruz has indeed "stood up" to the Establishment -- a.k.a Republican congressional leaders who are also very conservative but have actual nation-running responsibilities -- but the only accomplishment he can point to is forcing the Establishment into brinksmanship scenarios, with no leverage, from which the only way out is to cave to Democrats. Cruz's style has won conservatives nothing in terms of policy and, politically, he simply sparks a lot of detrimental infighting within the Republican party over tactics.

Cruz's style has made him a star among the most ardent conservatives, and either dismissible or genuinely loathed by everyone else. There's just not a lot of upward flexibility for America's lonely hero, the One True Conservative.