"Nothing is changing. It's all part of the cadence of the timeline we originally planned" 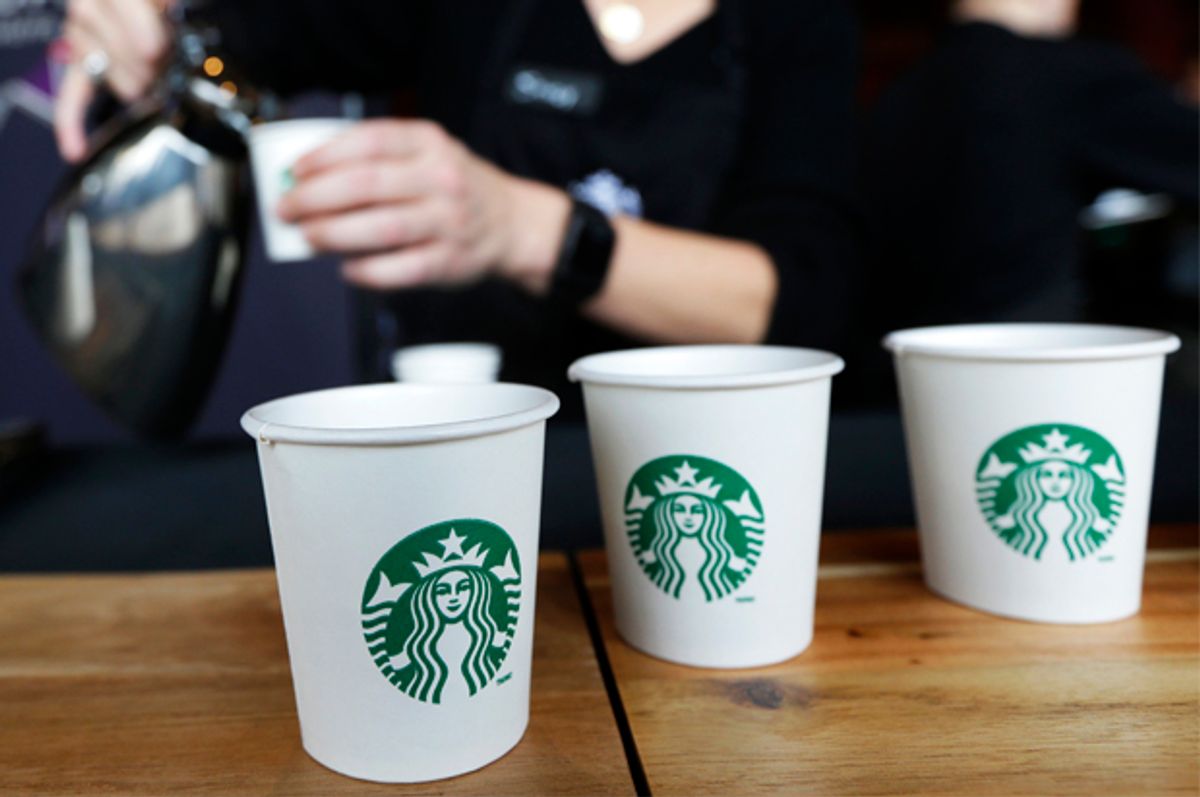 NEW YORK (AP) — Starbucks baristas will no longer write "Race Together" on customers' cups starting Sunday, ending a visible component of the company's diversity and racial inequality campaign that had sparked widespread criticism in the week since it took effect.

The company had planned all along to end the cup messages on Sunday and continue the campaign more broadly, Starbucks spokesman Jim Olson said.

The cups were "just the catalyst" for a larger conversation, and Starbucks will still hold forum discussions, co-produce special sections in USA TODAY and put more stores in minority communities as part of the Race Together initiative, according to a company memo from CEO Howard Schultz said.

The campaign has been criticized as opportunistic and inappropriate, coming in the wake of racially charged events such as national protests over police killings of black males. Others questioned whether Starbucks workers could spark productive conversations about race while serving drinks.

The phase-out is not a reaction to that pushback, Olson said. "Nothing is changing. It's all part of the cadence of the timeline we originally planned."

He echoed the company memo, saying of the Race Together initiative, "We're leaning into it hard."

Schultz's note to employees acknowledged the skeptics as an anticipated part of the outreach.

"While there has been criticism of the initiative — and I know this hasn't been easy for any of you — let me assure you that we didn't expect universal praise," it read.

He said the campaign at its core aims to make sure that "the promise of the American Dream should be available to every person in this country, not just a select few."

But the campaign didn't sit well with some Starbucks customers. Many voiced on social media and elsewhere that they didn't want a debate with their brew.

At a Starbucks in Pittsfield Township, Michigan, near Ann Arbor, two customers said on Sunday they didn't think a coffee shop was the right place for race relations dialogue.

Ninette Musili, a junior bio-molecular science major at the University of Michigan, said the campaign seemed to her like an insincere publicity stunt that wasn't executed properly.

Like many who criticized Starbucks, she goes to the shops either before class or later in the day to study. At neither time does she want to discuss race relations.

"Most people come to Starbucks for coffee," said Musili, who is 19 and African-American. "Race is an uncomfortable thing to bring up, especially in a Starbucks."

She said such discussions are important, and that Starbucks should have set aside time during the evenings for race discussions and invited people to attend.

"They're here for coffee. They're not here to push their political agenda," he said. "I even contemplated not coming here because of it."

He said Starbucks should remain neutral on such topics because it's an established brand, rather than risk alienating customers. "There are other ways you can go about doing things to stimulate interest in what you're doing," said Mulholland, who is white and runs an edible mushroom-growing business. "They must be doing so well they don't have to worry about losing customers over that," he said.

The campaign, he said, didn't start any discussions about race with him.

Discussions about race are necessary, but getting a message about it on a coffee cup is silly, Stephanie Nelson, 45, said at a Starbucks in Seattle, the chain's home.

"That was pushing it a bit," she said. "The broader discussion is good. Why not use your platform (as a company) for positive?"