The interior lives of girls (and "Girls"): Lena Dunham tells Salon about "Eloise" as inspiration & the genius of Hilary Knight

“There was nothing tidy about [Eloise],” says Dunham. "She doesn’t care if her stomach is hanging over her skirt" 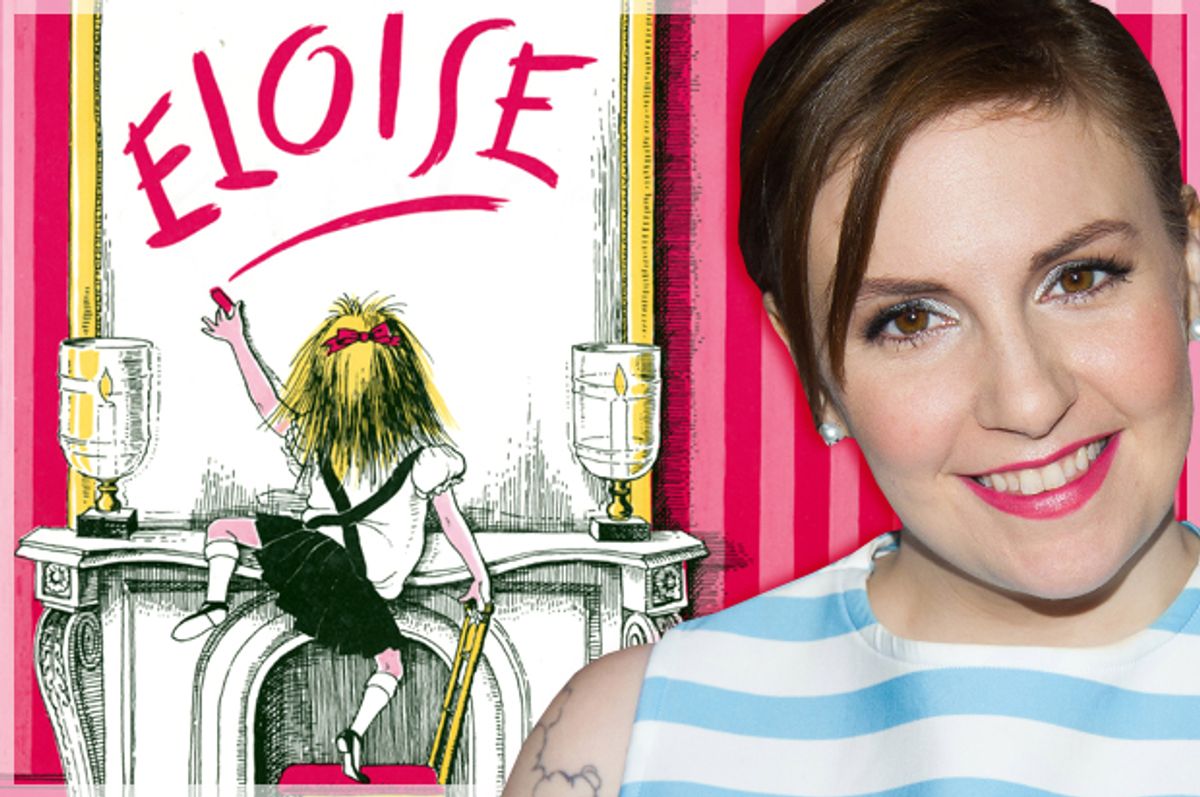 When I was 16 years old, I sat in the kitchen of a punk house on Long Island and let the bass player of a band called MDC tattoo the image of a little girl on my right arm. It was Eloise, who is six, a city child. Eloise who lives at the Plaza and is a nuisance in the lobby. The book was a favorite from my childhood that reemerged in importance during my teen years spent trying to figure out who I wanted to become.

While the other things I loved at 16 have ceased to appeal (like over-plucking my eyebrows and habitual pot smoking), Eloise remains. Literally because tattoos are permanent. But also spiritually. I thought of Eloise in many ways as a kind of id-heavy mirror for my youngest self and a talisman for my adulthood. At least that's how I have always explained it when asked why I have her image, scratching herself while deep in concentration, marked permanently on my body. (I also credit poor impulse control and Boone's Farm Strawberry Daiquiri.)

An Eloise tattoo is also at the heart of “It’s me, Hilary: The Man Who Drew Eloise,” an HBO documentary that airs Monday about Hilary Knight, the illustrator who gave Eloise the distinctive style and physical presence that has made her an icon.

The story goes like this: Knight learned from a friend that Lena Dunham had an Eloise tattoo. He sent her a letter, and the two began a friendship. Dunham would go on to executive produce the film, with Matt Wolf as director. “It’s me, Hilary,” documents the first meeting between Dunham and Knight and the illustrator's creative existence beyond the book that made him famous. The film is also an exploration of his life as seen through his many creative relationships with strong women. (“I'm attracted to a powerful woman,” he explains in the film.)

And perhaps the powerful woman who looms largest is Kay Thompson, the author of “Eloise” and Knight’s friend and collaborator turned creative rival. After "Eloise" took off, the pair began working on a follow-up, but it quickly fell apart. In the film, Knight recounts Thompson sabotaging his drawings for "Eloise Takes a Bawth," and later how her estate, after Thompson died in 1998, excluded him from new work on the little girl he helped create. Knight and Thompson were larger than life talents whose creativity and singular vision brought them together and, ultimately, drove them apart.

But what else would we expect from the creators of Eloise? The unruly invention of two unruly artists. In perfect complement to the rich complexity of the book's prose, Knight gave Eloise an equally subversive physical presence. Eloise, all messy hair and protruding belly, takes up space. Her unruly physicality is nothing like the tidy little girls that inhabit other children's books. This was part of what drew Dunham to Eloise, and Knight, in the first place.

“There was nothing tidy about [Eloise],” Dunham told Salon last week before a screening of the documentary. “She doesn’t want to take a shower, she doesn’t want to brush her hair. She doesn’t care if her stomach is hanging over her skirt. She’s not sexualized, but she is super alive and in her body."

Dunham also cites Knight's illustrations of Eloise as an early influence on how she experienced her body, in her life and work. "I think a lot of my relationship to my stomach... Eloise was really normalizing for me," she said. "But also the way that I deal with my body on "Girls" I think is highly influenced by seeing the way  that she operated and thinking there was something very appealing about it."

Eloise disrupts the binary in most children’s books that presents little girls as either princesses or overall-wearing tomboys. Eloise was neither. Because she was more. In the book, her innocence is expressed in brilliant non-sequiturs: Toe shoes make very good ears. Sometimes I wear them to lunch; I put a large cabbage leaf on my head when I have a headache; Paper cups are very good for talking to Mars.

Eloise's darkness -- a morbid curiosity that exists in little girls that we rarely talk about -- is similarly delivered in bits and bursts of prose and further revealed in Knight's illustrations. Saylor, her beloved doll, is drawn to have no arms, a leg that's about to fall off and a badly battered body. She is more frightening than cuddly. The doll's injuries, Eloise explains, are a product of “the most terrible accident" in which Saylor "bleeded so hard she almost choked in the night [sic].”

In another passage, lions and tigers and birds of prey make a meal of Eloise (along with her turtle Skipperdee and dog Weenie). According to Eloise, these ferocious creatures “eat us up raw and step on us and stamp their feet on us and absolutely rank us."

When not being terrorized, Eloise terrorizes. She runs down the halls with two sticks to “skidder along the walls” and stomps her skates to make a “really loud and terrible racket.” Knight's illustrations fill up the page, showing Eloise contort her face and body in every which way as she goes about harassing patrons to pass the time.

Eloise is right at home among the complicated, powerful women in Knight's life, even if she's only six. She is unruly and untidy in every possible way. She is innocent and world-weary. Spoiled and neglected. She is joyful and sinister. Charming and unlikeable. Little girls are rarely given the room to be so many things at once.

And that kind of honesty remains rare, particularly in children's books. “What I love about Eloise is that it doesn’t have a perfect ending. She’s not perfectly behaved, she’s not perfectly protected. She has an interior life,” Dunham said of the book's complex portrait of girlhood. “It’s really amazing to see a book that gives kids credit for feeling and thinking so deeply."

Perhaps all the more amazing in 1955, when "Eloise" was first released and marketed as a book for "precocious adults." But as Knight told Salon, it didn't stay that way for long. "Subversive little children discovered it, that was a wonderful thing that happened to the book." Asked if he considered Eloise a feminist, Knight said, “If being imaginative is being a feminist, yes. It’s that.”