"The Internet is a dark place": Former Scott Walker aide Liz Mair opens up to Salon

After just a day on the job, Liz Mair left Scott Walker's campaign due to her controversial views. Here's her story 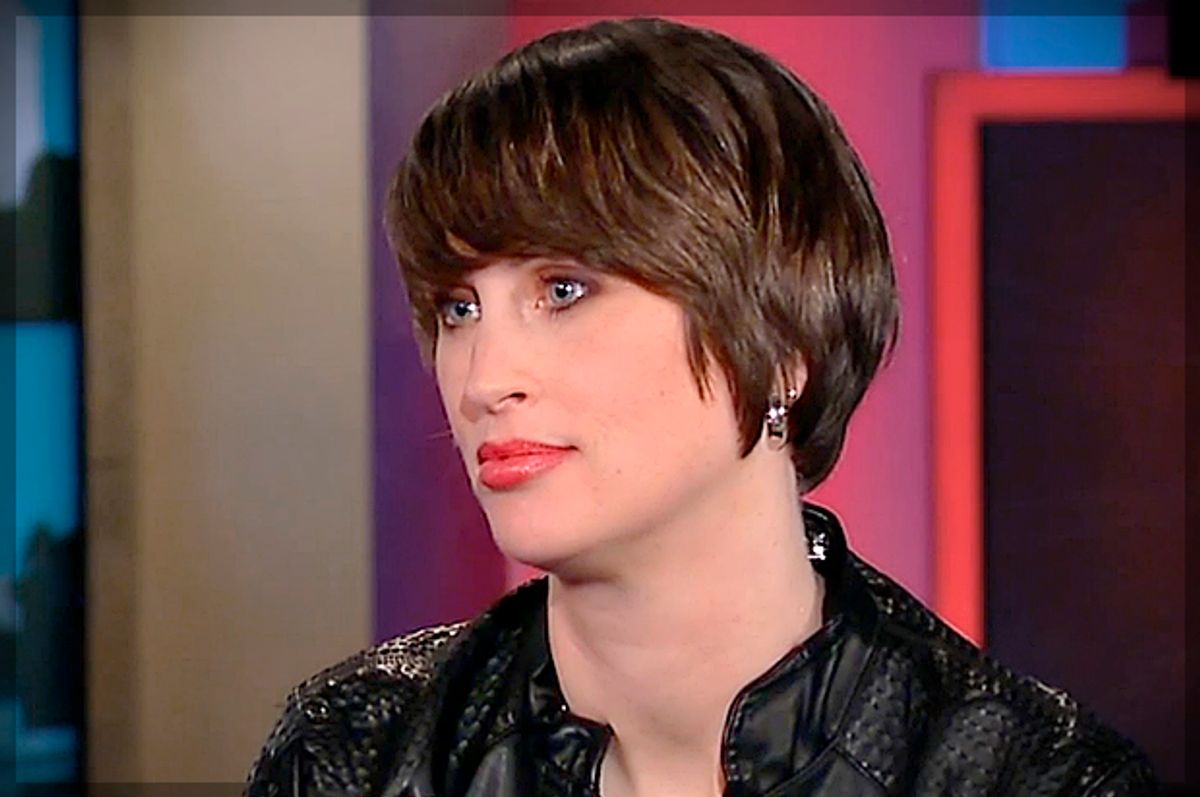 Bright, young, tech-savvy, political consultants across the country were rethinking their twitter strategies after Republican online communication strategist Liz Mair resigned from Scott Walker’s likely presidential campaign on Tuesday after just one day on the job.  Mair came under fire for tweeting her criticism of Iowa’s first in the nation caucuses, agriculture subsidies and the renewable fuel standard. Check out her posts @LizMair.

Based upon the reaction of Republicans across the country, and particularly in Iowa, you would have thought she either offended the NRA by stating background checks for gun ownership make sense, that trickle down economics really didn’t work, or that Chuck Norris is a weenie.

Jeff Kaufmann, the relatively new Iowa state Republican chair, called for Mair’s firing in a comment for the New York Times on March 17.

“It’s obvious she doesn’t have a clue what Iowa’s all about,”  Kaufmann said. “I find her to be shallow and ignorant,” he added, “and I’ll tell you, if I was Governor Walker, I’d send her her walking papers.”

Cody Hoefert, co-chair of the party piled on in the Times as well.

“When anybody who works for a presidential campaign thinks it’s O.K. to insult Iowa, Iowa voters and Iowa farmers, I find it absolutely disgusting and repulsive,’’ he said.

Republican Presidential Candidates had gathered in Des Moines in in January for the Iowa Freedom Summit, an event hosted by controversial Representative Steve King. Mair tweeted:

“In other news, I see Iowa is once again embarrassing itself, and the GOP, this morning. Thanks, guys.”

Shortly later, she wrote, “The sooner we remove Iowa’s frontrunning status, the better off American politics and policy will be.”

And the final straw came on January 22:

“Morons across America are astounded to learn that people from *IOWA* grow up rather government-dependent. #agsubsidies #ethanol #brainless”

Mair is certainly blunt, probably unnecessarily so. “Morons” and #brainless are bad word choices, but to me, nothing more.

So what are her real offenses? The role of Iowa’s first in the nation status in the presidential season is something that many question, particularly Republicans. And they should.  As Mair points out, Iowa’s picks certainly haven’t fared well in recent presidential elections. It’s a fact that Iowa tends to be more religiously conservative than the rest of the nation, and our Republican winners reflect that fact.  Even some Iowa Republicans question our role.

The merit of agricultural subsidies is also a legitimate matter for discussion, yet on one point of fact Mair is right on. While most Iowa farmers don’t see themselves as government-dependent, for the years 1995-2012 Iowa is second only to Texas in receiving a total of $24.9 billion dollars of subsidies. Yes, billions.

While we in Iowa might call these subsidies an important part of securing our nation’s food and fuel supplies, if Mair wants to call it dependence, that’s her prerogative, and it’s true. Many farms would fail without government support of one kind or another.

For her few posts, which address legitimate points of discussion in a rather blunt way, Iowa Republicans got all bent out of shape, and a bright young (36) political consultant either was given her walking papers or fell on her sword.

Mair is no dummy. She has an MA in International Relations from the University of St. Andrews in the United Kingdom, practiced corporate law, and holds a certificate in Political and Social Sciences from the Institut d'Etudes Politiques de Paris. She is also a former online communication strategist to  Rand Paul, Scott Walker, Rick Perry, and Carly Fiorina--all considering presidential bids. She is also obviously very successful in social media. She has over 17,000 followers on twitter, and her posts are blunt, honest, thought-provoking, occasionally vulgar, and often refreshing. Exactly the type of people many of us like to follow. As such, she should prove valuable in any political campaign she serves.

Yet, because she offended Iowa Republican party leaders, she’s on the sidelines. Apparently it gets worse, judging by another tweet of hers:

“It's a sad commentary that self-described Iowa Rs are emailing me calling me things like "pig," "bitch," and "dyke."

Given the high profile of her departure, but few if any direct discussions with Mair about it, I reached out to her via email last last week, asking her to share her thoughts with me for Salon. Our exchange follows below.

You have over 17,000 twitter followers. Is being outspoken/interesting/controversial part of branding for your consulting efforts, or just part of your personality? In other words, are your twitter posts just personal expression or a business strategy?

It’s part of my personality, but it has been helpful to me in building a business, certainly. That has afforded me the luxury of not having to really change who I naturally am in order to do my job.

Why are you a Republican? You seem to support making same sex marriage legal and legal abortion, not exactly mainstream Republican positions.

I am a hardcore economic conservative. I would imagine that on issues ranging from entitlements, to health care more generally, to taxes, to spending, to regulation, I am to the right of 95% of my party.  I generally side with people like Jeff Flake, Mike Lee, and Rand Paul on these things. I strongly oppose things like the Employee Free Choice Act, and Favor Right-to-Work and Act 10-like Reforms. I dissent from neoconservatives on various matters, but I am generally pretty hawkish on foreign policy, especially with regard to Russia. With regard to abortion, I am alternatively dubbed pro-choice and pro-life, depending on who you talk to, though I personally think “pro-choice” is the correct phrase for my views, even if I rabidly disagree with people like Cecile Richards. I favor strict limits on abortion after the first trimester (life of the mother being the only acceptable circumstance), and am deeply, deeply pro-life personally. I think abortion where a baby is disabled is immoral. I have attempted to talk friends out of having abortions, albeit not the 12 year-old friend who got pregnant from consensual sex with someone barely older than her when I was in Middle School. I am extremely pro-second amendment.

Many Iowans share your thoughts on ethanol and subsidies. Some of those same thoughts were expressed by candidates. Why do you think yours were controversial?

I think it depends on who you ask. Certainly, I am not Miss Manners when it comes to much of my twitter feed. I also think the renewable fuel standard and farm subsidies are important to a lot of people in Iowa, and I do have a policy difference with those people.

I actually don’t think it particularly was. Very few people in the GOP, the conservative base, or anywhere else actually agree with King. They may agree with Mike Lee, but there’s a huge difference substantively and rhetorically between the two.

Any tweet where I’ve misspelt something or used poor grammar. There are others where I might revise my precise wording.

How did Iowa Republicans respond to you?

I have had thousands of emails, tweets, DM’s, chat messages, Facebook messages, and texts in the last 36 hours. Only about 2 percent of them were negative or hateful. And a lot of the nicest, kindest messages have come from self-described Iowa Republicans and conservatives who disagree with me on social issues and immigration, in some cases quite starkly.

Was part of the response sexist? You were called pig, bitch, and dyke. If you were a man, do you think that the reaction would have been so harsh?

I think a man would get hate mail too. The precise insults would probably be different. I mean, no one is going to call a man a “dyke,” right?

Is this a cautionary tale for people who wish to work in politics, or any other position?

People will have to take their own lessons from this.  Everyone is going to have a different interpretation.

Alternatively, do you think that we need to recognize that twitter is a different kind of communication mechanism than we have ever had before, and that we need to not take it quite so seriously?

In some respects, I’d prefer people take twitter more seriously. For example, some people really will hurl horrendous insults at each other on twitter and really get in the mud unnecessarily fast. Obviously, I’ve gone to this particular trough on occasion too, though I generally try not to. I think one difficulty with more being done online these days is that people don’t have to insult you to your face...if they are going to do it. And that makes it easier and less scary for people, which means there is more general rudeness and crudeness out there. The internet is a dark place.

There are many Republicans who say things that are considered problematic--King, Palin, Trump, Paul and Cruz for example. To say nothing of the conservative media. Why do you think you were held to a different standard by those in the party?

Those people take about 10,000 times the pounding every single day that I have ever taken. In Trump’s case, I’ll admit to having basically zero sympathy. I think it’s part of a business strategy for him, and if you look at a lot of his past statements and positions, I’d query how conservative Trump really is. But I love The Apprentice.