"Apocalypse is right around the corner": Rick Perlstein unloads on Mike Huckabee-style conservatives 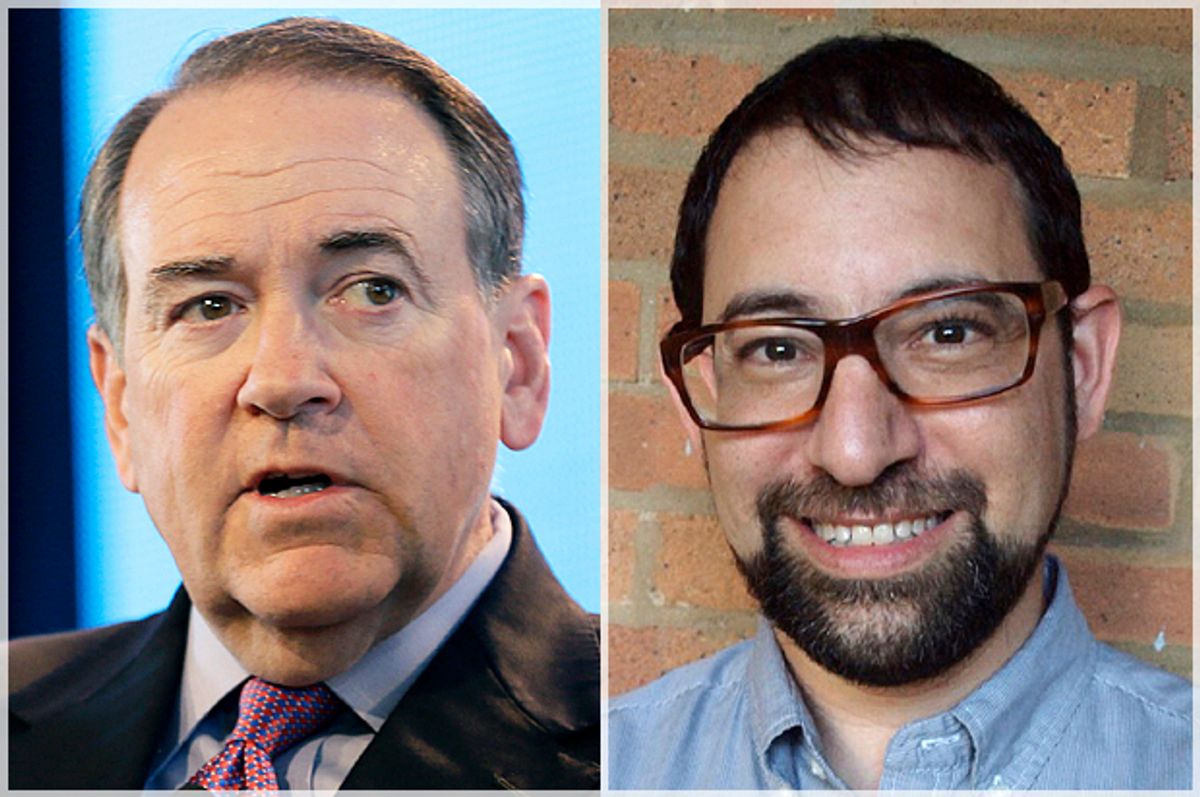 Earlier this month former governor of Arkansas, Fox News host and presidential candidate Mike Huckabee found himself on the receiving end of some well-deserved ridicule. But although his views on women's rights (and Beyoncé, apparently?) are so retrograde that it's almost funny, Huckabee's mistake wasn't letting slip that he thinks women sound "trashy" when using cuss words. No, his goof was something even sillier and even more lacking in dignity: He got caught hawking some snake oil cure for diabetes.

As many noted, Huckabee is far from the first ex-presidential candidate to trade his name for some grubby money; Bob Dole and Fred Thompson both carved out nice little niches in their post-politics years doing just that. What was new — or at least newer — however, was Huckabee selling himself to the highest bidder while simultaneously preparing to make another run for president. Reaching for the White House requires all manner of indignities, of course. At least for the time being, though, offering Americans some magic beans in exchange for their money is simply considered unpresidential.

But does that distinction really make sense? Was there ever really that much of a difference between Ronald Reagan and Billy Mays? In "The Long Con," a 2012 essay published by the Baffler, author and historian Rick Perlstein argues that the answer is: not so much. The line between selling miracle products and trickle-down economics has always been a thin one, Perlstein writes. So maybe Huckabee is really just keeping true to his roots — despite whatever Erick Erickson may think.

Recently, Salon spoke with Perlstein over the phone about his article, Huckabee's faux pas, and the connections between a con game and the conservative movement. Our discussion is below and has been lightly edited for clarity and length.

I thought the Huckabee thing was kind of funny, and it seems like there's a lot of pseudo-candidacies that are popular right now. A lot of the press he's gotten has seemed to imply he's doing something new or totally unprecedented. Is that true?

It's nothing if not orthodox. Back in the mid-'70s, what was then called "the new right" — which was the people who basically gathered around Richard Viguerie, including figures like Paul Weyrich and Terry Dolan — really leveraged a strategy that had been around since the Barry Goldwater campaign: fundraising via direct mail. They harnessed it towards this scandalous practice, in which it's very hard to tell where the politics ends and the grifting begins.

So Richard Viguerie is a pioneer of this kind of racket?

Richard Viguerie first collected massive mailing lists of conservatives after the Goldwater campaign. He was able to go to the Clerk of the House of Representatives, which is where, under campaign finance laws, they have the names and addresses of anyone who contributed more than $50 to a presidential campaign. He had temp workers copy down the names and addresses — which no one had really tried or thought of before — and he had thousands and thousands of them before the administrator there asked what he was doing and kind of chased them out. Very famously, those people were still getting solicitations decades later.

What he ended up mastering was a rhetorical style which is very familiar to viewers of Fox News, in which the apocalypse is right around the corner, and his innovation was to intimate that you could help stop it with a, y'know, $5, $10, $50 donation. His business model, as was very soon discovered, was taking 95 percent to sometimes even more than 100 percent of the take for his own purposes and profit and giving in only a minuscule percentage of the proceeds to the ostensible beneficiary, whether it was a fund that supposedly helped FBI officers injured in the line of duty or sending Bibles to Africa or supporting something like the National Conservative Political Action Committee.

It seems like that's kind of still what's going on — except now they do it with super PACs.

Right. The intermediate step was that online publications like Human Events and Newsmax— which is files and files of their horrible con games— would rent out their good name and their lists. You'd see something in your email like, Dear Human Events reader... and something about a 99-cent cancer cure. You never could tell where the grift begins and the politics end because there would always be rhetoric about how there's a liberal conspiracy to hide this knowledge from the public; that this particular cancer cure was used by Ronald Reagan, et cetera, et cetera.

The Political Action Committee angle seems to be a relatively new innovation based on this, but I'm sure if you did some digging you could find candidates doing the same thing. I believe that in the 1990s, The New Republic did an exposé of how Pat Buchanan had turned running for President into a business, so it didn't start with Ben Carson or Mike Huckabee.

To your point about the language, Huckabee's diabetes ad is couched in language that implies there's some grand conspiracy to conceal this miracle cure.

The language is so deceptive. He says, I've lost x many pounds, and makes it sound like it was this diabetes cure that did it, not diet or exercise, which is pretty handy because his last book was basically a diet book advocating that people eat grits and gravy— which is not something my doctor recommends for a healthy diet. Maybe this diabetes pill will do the trick...

Some people have implied that if the GOP primary electorate sees Huckabee doing this kind of grifting, they'll stop taking him seriously as a presidential candidate. What does recent history indicate?

Let's not forget 1988, when Pat Robertson won second-place at the Iowa caucuses. A lot of this stuff comes from Evangelical culture, which is a culture of witness, so the hawking of miracles is absolutely baked into the cake. Someone like Pat Robertson was followed by a figure like Pat Buchanan or any number of candidates in the last two or three Republican primary seasons, who make a lot of noise by doing decently well in early polls but then fade out once the seasoned pros take over and the money becomes preeminent.

If this historical pattern holds, Mike Huckabee, if he does well early, will flame out before the second or third inning but I see no impediment whatsoever for him to be disqualified by the conservative rank-and-file, simply because this stuff has been going on without much complaint since the 1970s. This is part of the hustle, right? If Huckabee can claim to have been victimized because of his activities, he can always claim it's the conspiracy of the liberal elites... and then it's off to the races.

What about Glenn Beck? Sometimes I'm not even sure he's political and wonder if he's just absolute, pure grift. Has anybody done it better than he's doing it?

It's very interesting; Glenn Beck is a Mormon and this stuff is baked into Mormon culture even more than Evangelical culture. There's the whole culture of multilevel marketing— or pyramid schemes, as they're more derisively known— which is basically a system where you buy a franchise for some kind of product but you really only make money by selling a chunk of the franchise to your neighbor. The further down the line you are, the less likely you are to realize any profits, and most people lose lots of money on this stuff. MLM, some people joke in Utah, stands for "Mormons losing money" and so these guys are masters of the stuff. There's also a culture of Evangelical or Mormon witnessing; being able to cry on cue when telling the story of your victimization is very important. This goes back to Elmer Gantry as portrayed by Burt Lancaster in the film of the same name.

Glenn Beck has certainly done well taking that art to the next level. The point is, you can't really say if these guys are politicians or con men. One of the points I try to make in my Baffler article using Mitt Romney as an example is that the structure is very similar and the rhetoric passes through the blood-brain barrier, from one to the other, almost imperceptibly. It's very difficult, structurally, to distinguish between George W. Bush deftly advancing a conspiracy to convince the world that there are weapons of mass destruction in Iraq and to convince them that they can spend 99 cents on a cancer cure.

It always seemed to me that the rhetoric you're talking about is often removed from any policy goal; it's more of an affirmation of identity.

Well, ultimately, conservatism is about a tribal identity and not any particular policy goal. It's about dividing the world into the saved and the damned, and policies are secondary or tertiary to that project.