On the sitcom's ten year anniversary, we look at how the show changed the face of television 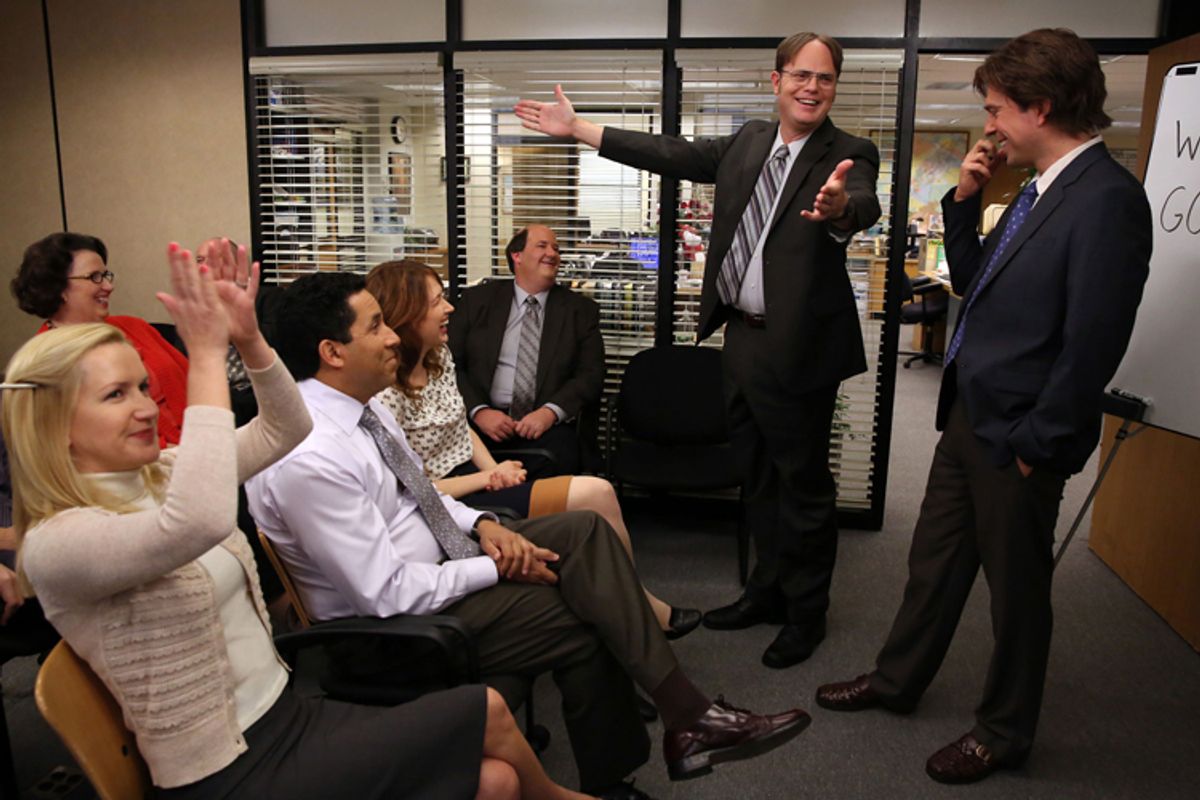 “The Office” premiered a decade ago today, and it’s hard to overstate the impact the show had on pop culture over the course of its (admittedly rocky) eight year run. While it began as a weak copy of Ricky Gervais' British "Office", it soon turned into a comedic powerhouse, serving as the lynchpin NBC’s robust mid-aughts Thursday night comedy block, spawning direct spinoffs like “Parks and Recreation," laying the groundwork for future hits like “Modern Family,” while making stars out of its cast of newcomers, including Mindy Kaling, Ellie Kemper and Ed Helms. In honor of the tenth anniversary of the Dunder Mifflin gang, here’s a look at ten wonderful things which directly owe their existence to Greg Daniels' iconic workplace comedy:

1. "The Mindy Project"
Kaling got her start in showbiz as one of the “Office”’s first writers, where she was the only female writer in a staff of eight. She also played the (initally minor character) Kelly Kapoor, pioneering the sort of exaggeratedly ditzy version of herself that she would hone to perfection in her role as Mindy Lahiri on the "The Mindy Project." In her eight years at "The Office," Kaling's star continuously rose; she went on to direct episodes and became an executive producer in 2011, as well as gaining a deal for a spinoff show, which would eventually become “The Mindy Project.” The rest, as they say, is history: Mindy Kaling is now one of the most successful women working in comedy today.

2. B.J. Novak
His debut collection of comedic fiction, "One More Thing: Stories and Other Stories," was a New York Times bestseller, establishing him as a fresh and innovative comedic voice beyond his crucial work on "The Office" (where he starred as Kelly's on-again-off-again beau Ryan and was also a writer and producer).

3. Oscar nominee Steve Carell
Carell had a career before "The Office" — as a correspondent on "The Daily Show" and in films like "Anchorman" and "The Forty Year Old Virgin" — but it was his role as bumbling boss Michael Scott that really made him into a household name (and got him six Emmy nominations to boot). The cachet afford to him by six years in primetime also enabled him, eventually, to transcend his comedy roots and flourish into the multitalented Steve Carell we know today: A serious film actor who was nominated for an Academy Award as murderous wrestling coach John DuPont in Bennett Miller's "Foxcatcher."

4. "Parks and Recreation”
“Parks and Recreation” was originally intended as an “Office” spinoff, with creator Greg Daniels teaming up with writer and producer Mike Schur to create a new show about a group of civil servants in a small Indiana Town. While "Parks" would go on to transcend its source material, there would be no Leslie Knope, no Ron Swanson, no Pawnee, without “The Office.” "Parks" adapted many of  the tropes its predecessor pioneered -- from the single-camera mockumentary to the freedom of allowing background characters to gradually drift to the forefront -- eventually becoming as much of a wide-reaching comedic influencer as "The Office" itself.

5. Rashida Jones
While Jones had had various minor roles before “The Office,” it was her 24-episode run as Karen Filippelli that would eventually get her cast on “Parks and Rec,” as Leslie’s dependable BFF Ann Perkins.

6. "The Unbreakable Kimmy Schmidt"
Vulture recently ran a post asking how Ellie Kemper became one of 2015's most beloved stars. The answer? “The Office,” of course. As receptionist Erin Hannon, Kemper demonstrated the lovability and chirpy charisma that would go on to get her cast in films like "Bridesmaids," "Get Him to the Greek" and "21 Jump Street" -- and finally to star in her own show this year, Tina Fey and Robert Carlock's smash hit "Unbreakable Kimmy Schmidt."

7. Ed Helms
Another former "Daily Show" correspondent who broke out on the "Office," Helms would go on to star in "The Hangover" trilogy -- a role he nabbed because of his scene-stealing work as Andy Bernard, natch.

8. Dwight Schrute
In a cast full of breakout stars, Rainn Wilson might be "The Office"’s greatest discovery. While “Backstrom” hasn’t exactly been a hit, we’re confident Wilson will find his own star vehicle. But even if he doesn't, well, we'll always have Dwight Schrute. Wilson's sour, beet-farming office drone is one of those indelible characters destined to become a cultural icon in itself, a perfect union of actor and character, and a walking meme so iconic that some people now have the scowling face of the "Assistant to the Regional Manager" tattooed on their forearms for all eternity.

9. The single-camera mockumentary series
While “The Office” wasn’t the first show to pioneer this style of filmmaking, it certainly contributed to the ubiquity of the single-camera format today, with shows like "Parks," "New Girl," "Community" and "Modern Family" all following in its assured footsteps.

10. The “That’s What She Said” joke
Remember around 2006, when you couldn’t get through a conversation without some annoying friend blurting out "that's what she said" in the middle of every conversation? You have "The Office" to thank. While the show didn’t invent the notoriously bad joke, it certainly made it its own; As The Atlantic writes: "The odd achievement of The Office was to weaponize this basic structure.... It became such a staple that meta-jokes were tacked on to prolong its life, like non-verbal TWSS winks and attempts at the gender-balanced “That's what he said.” From there, TWSS rapidly penetrated the American idiom, spreading furiously across Facebook profiles and frat houses." We don't miss the whole thing, but it was fun while it lasted. (And yeah -- that's what she said).