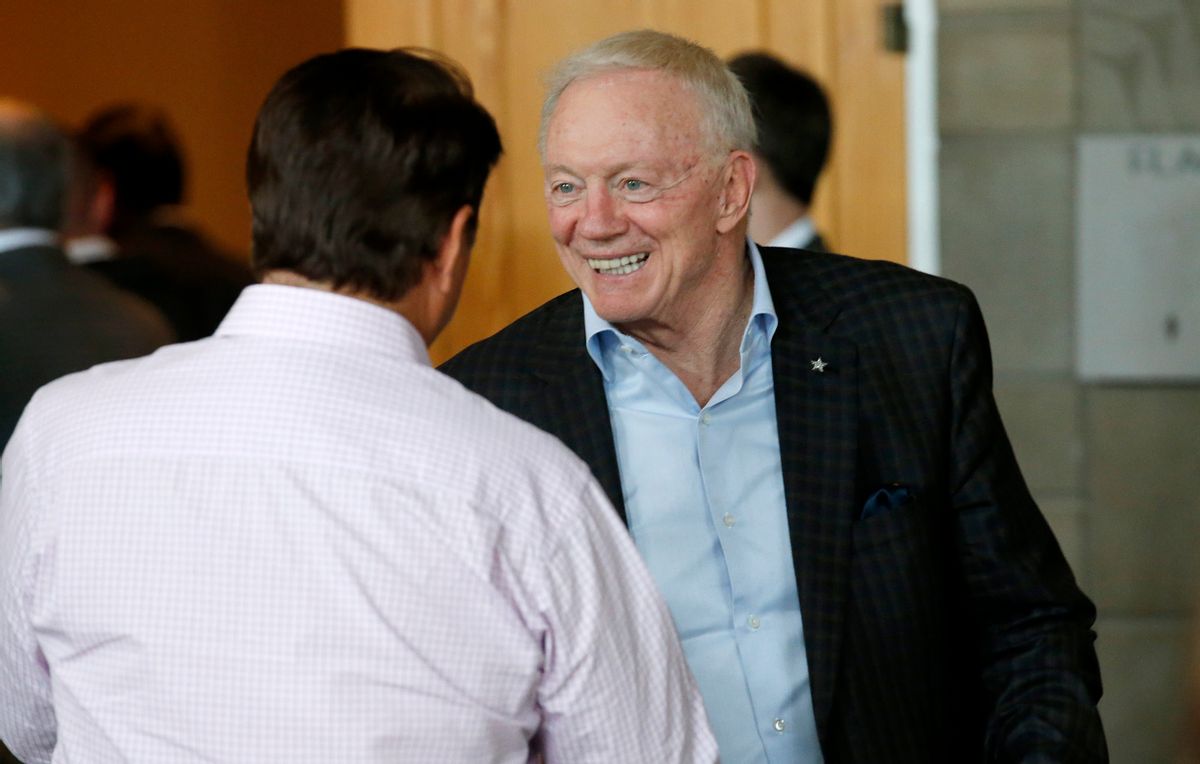 Dallas Cowboys owner Jerry Jones smiles as he is greeted as he arrives to attend a general session at the NFL Annual Meeting Monday, March 23, 2015, in Phoenix. (AP Photo/Ross D. Franklin) (AP)
--

PHOENIX (AP) — The NFL might be giving more power to its in-game medical observers.

One of two dozen proposals the owners are considering at this week's meetings would stop the action to remove a wobbly player from the field. That would be the call of the medical advisers upstairs if they sense a player is disoriented.

On a busy Monday when the league announced it would drop local TV blackouts for the 2015 season, player safety and catches vs. no catches also were prime topics.

Millions of viewers and thousands of fans saw a wobbly Julian Edelman remain in the Super Bowl. After looking at video of that situation and several similar ones, the NFL's powerful competition committee is proposing a change.

"We've got the (medical) spotters," said Rich McKay, president of the Atlanta Falcons and co-chairman of the committee. "They've got a really good vantage point, they've got technology in their booth, they're communicating pretty well with our trainers and doctors and we've got a pretty good rhythm going there.

"And maybe this becomes the fail-safe. We do not expect this to be a rule that gets used a lot. We expect it to be a fail-safe when people just don't see this player and the distress the player may have had, the spotter does and stops the game."

The player would be removed from the game and undergo an examination on the sideline at the very least.

The player's team would be allowed to substitute for him, and the opposite team also would be given a chance to change personnel.

Several other proposals have to do with player safety, with a few also involving instant replay. Indeed, video replay suggestions from the teams make up 13 of the suggested alterations.

Other proposed changes include using replay for reviewing all penalties called by game officials — yes, pass interference and holding calls, too; all personal fouls; penalties against defenseless players; any foul that results in an automatic first down; and clock issues.

New England even proposed that everything except scoring plays or turnovers be challengeable, and Washington suggested increasing the number of coach's challenges from two to three, regardless of whether he is successful on an early challenge.

Owners will vote on some of the proposals in the next two days, with several likely being tabled until the next major meetings in May.

The competition committee does not endorse using replay for penalties.

"The committee's position for years has been to oppose involving fouls in replay for a lot of different reasons," said Rams coach Jeff Fisher, the other committee co-chairman. "We've looked at a lot of tape this offseason, we looked at the fouls particularly relating to hits on defenseless players. We had 27 of them this year, we looked at them as a group. We could not agree on a number of them.

"That's just the nature of the standard in replay."

There will be no change to the actual catch-no catch rule, but the language will be clarified. It's been a particularly hot topic since the NFC playoff game in which Cowboys receiver Dez Bryant had a catch near the Green Bay goal line late in the fourth quarter reversed to an incompletion.

"For years the requirements for a catch — the way it was communicated in the rule book — is control, both feet (in bounds) and then, after that, the receiver had to have the ball long enough to perform an act common to the game," vice president of officiating Dean Blandino said. "That was defined as being able to pitch it, pass it, clearly advance the ball as a runner."

That created confusion, which Blandino believes will be eliminated by changing the wording.

"So in order to complete a catch, the receiver has to have control, both feet on the ground and he has to have it after that long enough to clearly establish himself as a runner," he said.

—The league eliminated local TV blackouts of games for next season.

There were no blackouts last season, because the minimum number of tickets, by NFL sellout standards, was sold for every game, and the league had only two blackouts in 2013. The current blackout policy has been in effect since 1973.

—The Oct. 25 game in London between Buffalo and Jacksonville will be streamed live internationally. The experiment, which will start at 9:30 a.m. ET, means the game won't be shown on television outside the local teams' markets.

—Foreign sites are being considered for the Pro Bowl. Next year's game will be played in Honolulu, but Brazil is among the possible sites beyond that.