Supreme Court's corporate humiliation: Why this court would have Jefferson rolling in his grave

As right-wing justices grant corporations ever more rights and powers, here's who's slowly but surely losing theirs 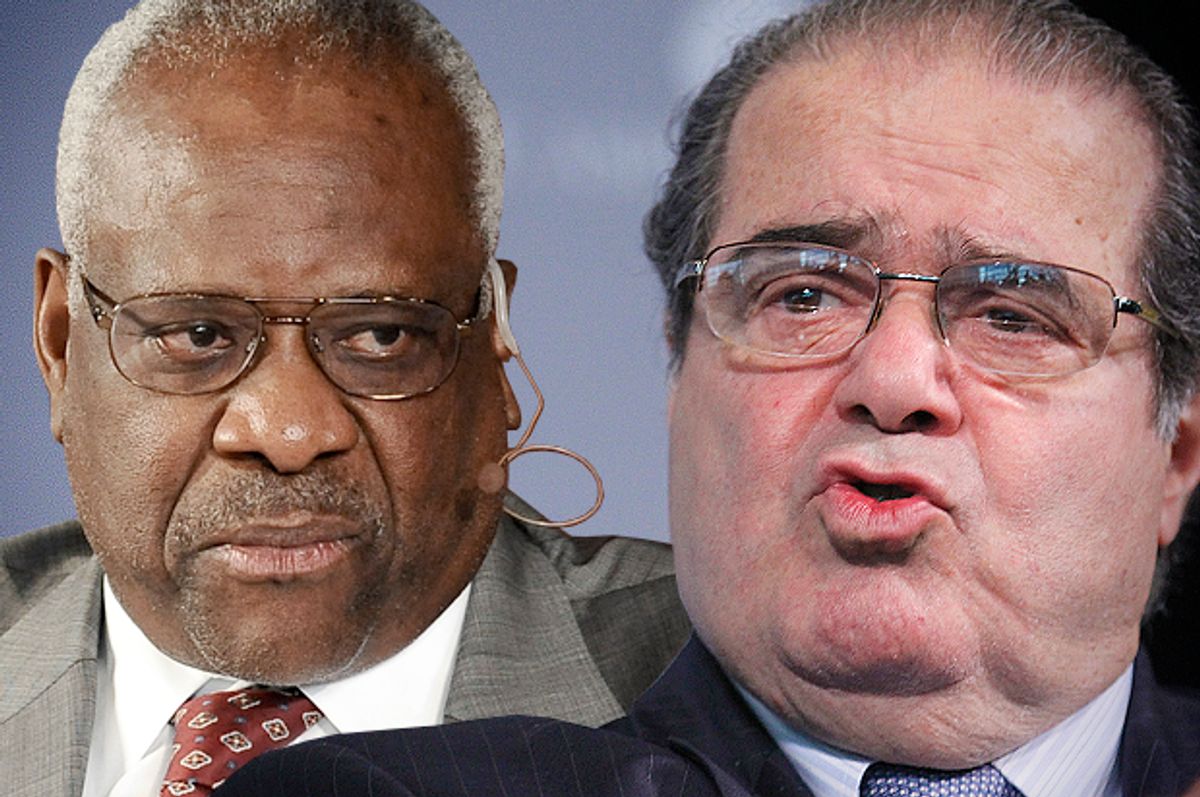 Religious exemptions have been causing a great deal of debate lately, with some arguing that they are a natural extension of the establishment clause, and others contending they are dangerous for the law, as well as for minority groups. In some cases, religious exemptions essentially give people and organizations the right to discriminate against others, and possibly the right to commit domestic and child abuse in some cases, if there is religious pretext. How could anyone possibly be exempt from child abuse, you ask? One of the many examples one could frighteningly claim comes in the book of proverbs, where to some horrifying interpretations, the Bible gives one every right to beat a child: “Withhold not correction from the child: for if thou beatest him with a rod, he shall not die. Thou shalt beat him with the rod, and shalt deliver his soul from hell.” (Proverbs 23:13-14)

Now, it is unlikely that one would ever successfully achieve a religious exemption for beating their child, but just the idea is scary. More likely exemptions come from laws that may help gay people, women, and minorities. Currently, in Georgia, the state senate is attempting to pass the Georgia Religious Freedom Restoration Act, which former Attorney General of Georgia, Mike Bowers, has said, “will be an excuse to practice invidious discrimination...(and) permit everyone to become a law unto themselves in terms of deciding what laws they will or will not obey, based on whatever religious tenets they may profess or create at any given time.”

Exemptions have also been harshly criticized for their widespread use for parents to opt their children out of important vaccinations, even though research has shown that no religions seem to be actually opposed to vaccination, except for Christian Science. Almost all states offer parents the right to exempt their children for religious beliefs.

What makes this all even more scary is that, as of last year, for-profit corporations also have the apparent right to religious exemptions. The Supreme Court has continued its crusade to provide corporations with every single right afforded to human beings, taking this whole corporate personhood to whole new levels. The Hobby Lobby case, decided last June, has given private closely-held corporations (not public) the right to religiously object to laws; or in other words, now certain corporations have the full protection of religious belief, just like human beings. Like all corporations, Hobby Lobby, which is a for-profit arts and crafts company owned by an Evangelical Christian family, is considered a person under the law. Though the court did not base their decision on corporate personhood, this case does continue the American tradition of providing for-profit organizations the same rights as individuals.

Corporate personhood goes all the way back to the U.S code of law, where it is says “the words 'person' and 'whoever' include corporations, companies, associations, firms, partnerships, societies, and joint stock companies, as well as individuals.” A landmark case in corporate personhood was the 1886 Santa Clara County v. Southern Pacific Railroad, when Chief Justice Morrison Waite declared that “The Court does not wish to hear argument on the question whether the provision in the Fourteenth Amendment to the Constitution which forbids a state to deny to any person within its jurisdiction the equal protection of the laws applies to these corporations. We are all of opinion that it does.”

Since then, corporations have been given the same protections under the fourteenth amendment, which was originally passed to provide freed slaves with rights and equal protection, as people. Of course corporations are not really people; they do not have physical bodies or consciousness, they are man-made creations with the sole purpose of making profit. And while corporations are provided most of the same rights as humans under the law, they do not seem to ever receive the same penalties as humans. How could they? You cannot put an imaginary institution into prison; they don’t have bodies. The worst thing that can happen to a corporation is they can go under, or die, to keep this human-corporation comparison going. But the financial crisis fallout has shown that this rarely happens. Corporations generally receive slap-on-the-wrist fines, and go on their merry way (maybe if states like Texas continue to insist on having a death penalty, they can also sentence corporations to death?).

The other landmark case that has extended corporate power even further is Citizens Untied v. FEC. Five years after the Citizens United ruling, we can truly see what kind of pandora’s box this case has unleashed. The decision has given corporations the right to spend unlimited amounts on elections, as long as they do not directly coordinate with the candidates. Before Citizens United, it was illegal for corporations to spend on electioneering within thirty days of a primary or sixty days of a general election. The decision was based on the argument that corporations and other organizations should be afforded the same rights as people, and that campaign rules were violations of their first amendment right. It was determined that the freedom to spend unlimited amounts of money on political campaigns is the same as the freedom of speech.

Since this case, outside spending on elections has ascended to record heights. During the 2012 election, outside spending tripled that of 2008 and reached over one billion dollars.  Political nonprofits, which do not have to disclose the source of their funding, and have thus been labeled “dark money,” have shot up at unprecedented speed. In 2006, spending by non-disclosure organizations was just $5.2 million, and by 2012, two years after citizens united, it had risen to over $300 million.

The so-called rights of corporations and lobbying organizations under the first amendment have opened up the government to plutocrats like Charles and David Koch. Today, because of the lawlessness of campaign finance, politicians are forced to constantly raise money and court the wealthy, creating a vicious cycle of desperate candidates and powerful tycoons. Thomas Jefferson once said, “I hope we shall crush in its birth the aristocracy of our monied corporations which dare already to challenge our government to a trial by strength, and bid defiance to the laws of our country.” He is surely rolling in his grave.

The Hobby Lobby case, which is less than one year old, will likely open another pandora’s box of corporate abuse. The case was based on Hobby Lobby seeking a religious exemption from the Obamacare mandate that all employer health insurance plans cover contraceptives for women. The Green family, which owns Hobby Lobby, claimed that female contraceptives was against their religious beliefs. But remember, Hobby Lobby is a for-profit corporation, not a non-profit religious institution, like a church or mosque. The ruling in favor of Hobby Lobby has basically given closely held private corporations the right to have a religion, just as people do, and therefore the right to claim religious exemption for certain laws.

Now, say the previously mentioned Religious Freedom Restoration Act in Georgia passes, corporations will then be able to seek the same religious exemptions as people. These include things like discriminating against gays, firing someone for a religious reason, or refusing a customer because of their sexuality or race. Anything that could “substantially burden a person’s (corporations) exercise of religion.” No doubt, this bill, and others like it around the country are extremely dangerous, even without the corporations ability to seek exemption. But the fact that the supreme court has further extended the rights provided to human beings to corporations makes it even more outrageous.

These two landmark Supreme Court decisions over the past five years have greatly increased the power of corporations, and we have yet to see the true results. But one thing can be sure, as corporations continue to gain more freedom and power, individuals continue to lose theirs. Corporations and billionaires have exorbitantly more influence than individual voters, and this has created the plutocratic environment of modern American politics. The more corporations spend, the more the law seems to bend to their will. Both natural people and corporations may be afforded the same rights under the law, but corporations simply do not face the same threats and penalties as real, biological human beings.

And even if they did, the corporation does not have a morality or conscience, and would be equivalent to the worst of psychopaths. And the Supreme Court has given these artificial psychopaths all the legal power they need to do what they do best: make money and expand. If converting to Christianity or spending millions on elections helps in this endeavor, you can be sure they will do what is necessary.