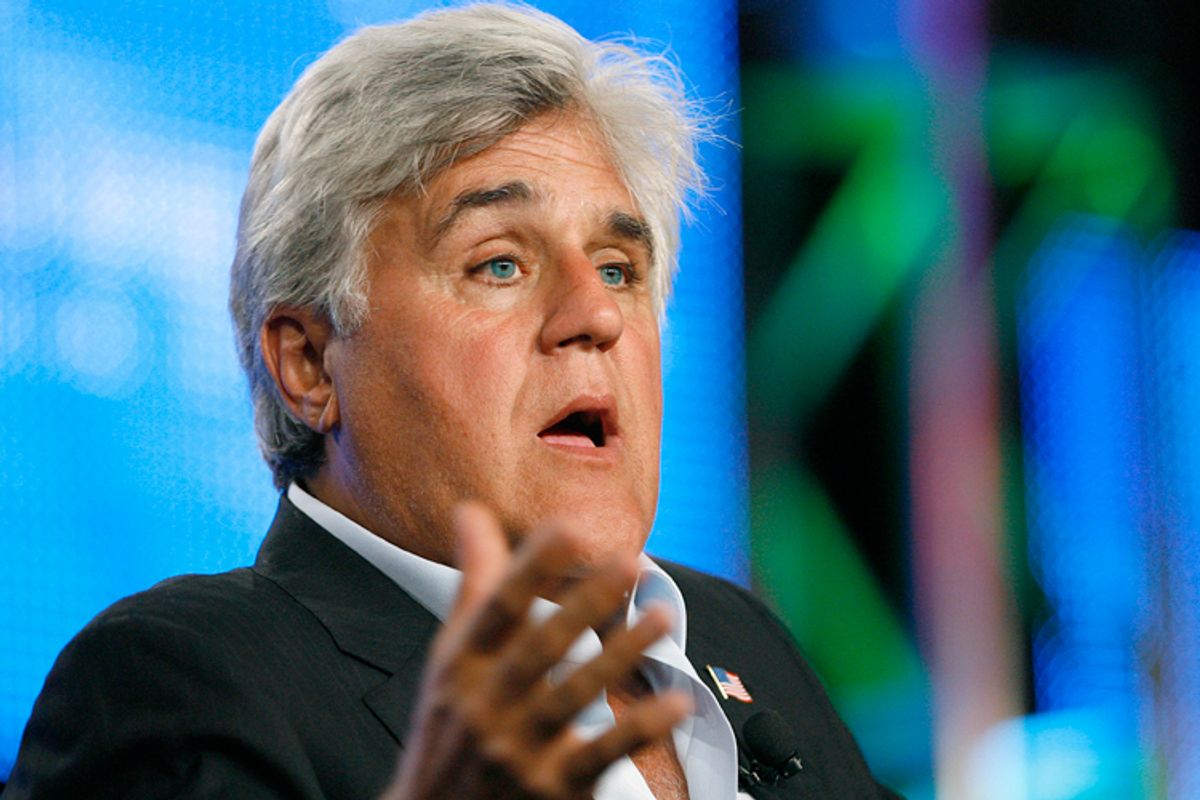 There’s a brand new man in late night — freshly-minted "Late Late Show" host James Corden — and yet even as his own “Tonight Show” era recedes further into the distant past, Jay Leno is still around trotting out his same tired old shtick. Leno still can't shake the controversy that dogged his final years at the helm of "The Tonight Show," when he demanded to be reinstated as host in 2010, ousting his short-lived successor Conan O'Brien in a power move that galvanized Team Coco and established Leno once and for all as a complete and total asshole.

Last night, Corden did a segment in which celebrities came out and gave him advice on how to host the show. After Arnold Schwarzenegger and Meryl Streep gave their suggestions, Jay Leno came out to do a bit, which involved the former late night host muttering devilishly to himself: "In three months, this show will be mine."

It’s a variation on the same joke Leno has been making for years about his notorious coup. He did it in a “Today Show” interview with Matt Lauer back in 2014, as well as reprising the gag in Jimmy Fallon’s recent "House of Cue Cards" segment (in which Leno pushed Fallon in front of a subway car, a la Frank Underwood, a particularly brazen riff on his image).

The tendency to lean on these sorts of self-deprecating “I’m so evil” jokes makes sense intuitively — it plays into the bitter old man persona Leno has established for himself (and also, to some degree, had unwittingly conferred upon him), while attempting to make the audience think he’s being self-deprecating, in the belief that his bad behavior can be somehow mitigated by self-awareness. And Leno is an asshole -- from to upholding the "Tonight Show"'s ridiculous Joan Rivers ban to his longtime feud with Letterman, boorishness has long been a a major part of Leno's brand.

But while self-effacement is a trait we usually embrace in celebrities — and a useful PR tactic for some of our less-likable stars -- it’s not working for Leno. It just serves to remind us how awful he is, and continues to keep the ugly episode fresh in our mind, even as it becomes increasingly irrelevant to the pop culture landscape as we know it.

Leno was always pretty one-note back when he hosted the “Tonight Show," trotting out the same unfunny bits long past their expiration date — Bill Clinton likes sex! har har! -- so it’s unsurprising that he would continue to beat a dead horse with the Conan show-stealing routine. But if the goal is to make himself more likeable, sorry Jay — the self-effacing jerk thing is just not working. And as last night's stale Corden gag just proved, it's long past time for Leno to get off the set and make room for someone else.