GOP innovation paralysis: How Jeb Bush sucks the oxygen out of Republican “reform”

While some governors practice genuine policy innovation, Bush’s fundraising juggernaut keeps them on the sidelines 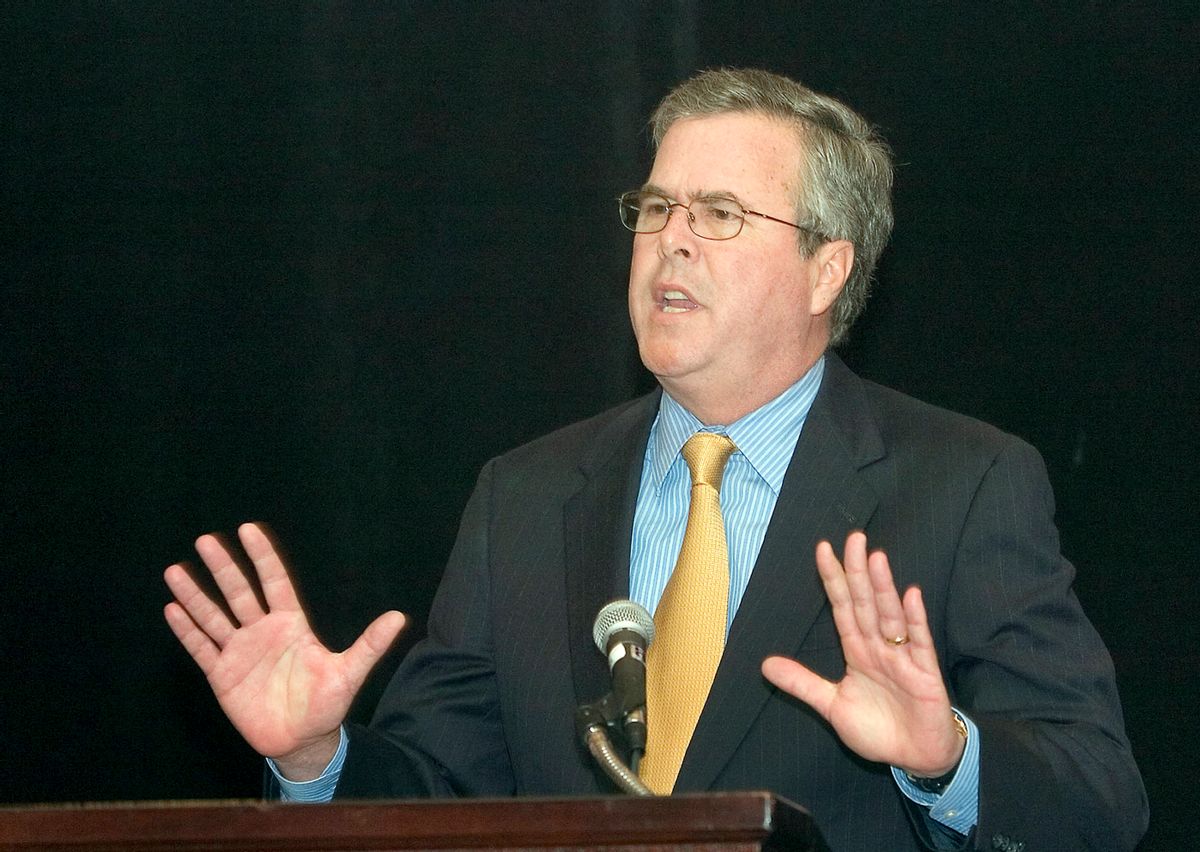 FILE - In this May 26, 2006, file photo, then-Florida Gov. Jeb Bush speaks to a mostly Republican audience at the 58th Annual Lincoln Day Dinner at the Hilton Miami Airport Hotel in Miami. Among the many thousands of emails Bush received as Florida governor are a string of notes from campaign donors asking for favors and making suggestions. Invariably, Bush responded politely. Sometimes, he appointed a person a donor had recommended. Other times, he rejected their advice about a piece of legislation. Its an insight into Bushs work as governor that's only possible because his emails are available for review, something not yet possible for those sent and received by Hillary Rodham Clinton as secretary of state. (AP Photos/Mitchell Zachs, File) (AP)
--

I feel for Ohio Gov. John Kasich. He can’t get traction as a potential 2016 GOP presidential nominee with anyone so far -- except political journalists. He sits around 1 percent in polls (that bother to mention him) and yet he’s been the focus of two long, laudatory profiles, touting his potential presidential appeal, in the last 18 months.

The New York Times’s Trip Gabriel found Kasich to be a maverick who “defies GOP with defense of safety net.” Now Yahoo Politics’s Andrew Romano asks if he could be “the GOP’s secret weapon in 2016?” He answers, archly, “John Kasich thinks so,” but the sympathetic profile suggests Romano agrees. Kasich seems eternally poised on the brink of defining a new way for the GOP -- Compassionate Conservatism 2.0 -- but is stymied by his inability to a) raise big money and b) get taken seriously (beyond Ohio and the national media), at least partly because he seems a tiny bit loopy and c) get past the boys of the Bush dynasty.

Though I’m not much of a Kasich fan myself -- I don't believe he's as compassionate and open-minded as Gabriel and Romano do -- I have to admit that the piece made me a tiny bit more sympathetic to him. It underscored the way Jeb Bush is sucking up all of the air in the moderate GOP wing (which is cramped enough as it is), even though he’s not as genuinely moderate or innovative as someone like Kasich.

Romano’s case for Kasich resembles Gabriel’s: the Ohio governor is one of the few Republicans who not only expresses concern for the poor, but tries to respond with policy. “I’m concerned about the fact there seems to be a war on the poor,” Kasich told the Times. “That if you’re poor, somehow you’re shiftless and lazy.” He’s one of only a handful of Republican governors to expand Medicaid, part of a larger push to increase health care spending in Ohio, especially for mental illness, addiction and autism.

Ask him about climate change, and he admits that “we have to pay attention to science” because “it’s a real concern.” Ask him about a pathway to citizenship for illegal immigrants, and he confesses that “if at the end of the day that needs to be part of the solution, I’d probably be fine with it.” Ask him about Common Core — the Obama administration’s push for national education standards — and he chides his fellow conservatives for refusing to participate. “I don’t know how anybody can disagree with that.”

Romano downplays the parts of Kasich’s career that reflect conservative orthodoxy: kicking folks off food stamps, enacting new abortion restrictions, reducing estate taxes and cutting aid to local governments. He brushes off the blue-collar Kasich’s post-Congress stint with Lehman Brothers by pointing to his need to provide for his family after years of government service. Romano does note that Kasich is trying to solve his political money problems by slobbering all over Sheldon Adelson and sounding hawkish on Israel.

And Kasich also comes off as more than a little bit taken with himself: “For some reason, the Lord has made me more aware of people’s problems,” Kasich told Romano on a trip to West Virginia, after he got teary-eyed reading a tobacco-awareness poster featuring notes from kids who lost parents to cancer. “And I take that awareness seriously.” He’s also unfiltered and sometimes loopy, unable to distinguish Rand Paul from Ron Paul (when told the Kentucky senator criticized Kasich’s Medicaid expansion.)

Still, I read the profile thinking Kasich would make a formidable 2016 representative of a genuine GOP reform impulse, because he’s been a much more innovative and eclectic governor than Jeb Bush was. The man now touted as the party’s moderate savior was a very conservative governor, and even today, Bush’s vaunted political courage is more rhetoric than substance.

But Bush’s family ties to the GOP establishment, thanks to his father and brother’s presidencies, and his immense fundraising capacity could keep Kasich on the sidelines. Romano’s profile made me think about Barbara Bush saying she hoped Jeb wouldn’t run: “If we can’t find more than two or three families to run for high office, that’s silly, because there are great governors and great eligible people to run.”

By the end of Romano’s profile, it seems that Barbara Bush was prescient: George W. Bush kept Kasich from making a real run in 2000, and “it’s possible the situation will end up being very similar,” the governor admits wistfully. The formidable candidacy of Barbara Bush’s son may block what many Republicans would consider a “great governor” from making a run.

Now, someone could make the same point (people already have) about Hillary Clinton and the Democrats, but I think the comparison is faulty. Clinton’s candidacy isn't preventing the development and flourishing of genuine new ideological currents in her party. In fact, whether she wins or loses, her candidacy may accelerate them. The Elizabeth Warren wing of the party is determined to raise a populist economic agenda and urge Clinton to endorse it.

The moderate establishment wing of the GOP, by contrast, seems content to let Jeb Bush be its standard bearer, charged with figuring out how much to cave to his party’s far-right base during the primaries, while trusting him to course correct in time for the general election. The campaign is unlikely to feature a genuine debate about a GOP economic growth agenda – a debate that a Kasich candidacy might catalyze. That’s a loss not just for Kasich, if indeed he skips a run, but for the country.