The new Gamergate: Angry white men are trying to shut down diverse comics

Female Thor and Muslim Ms. Marvel are saving the comic book industry, and the misogynist trolls are pissed 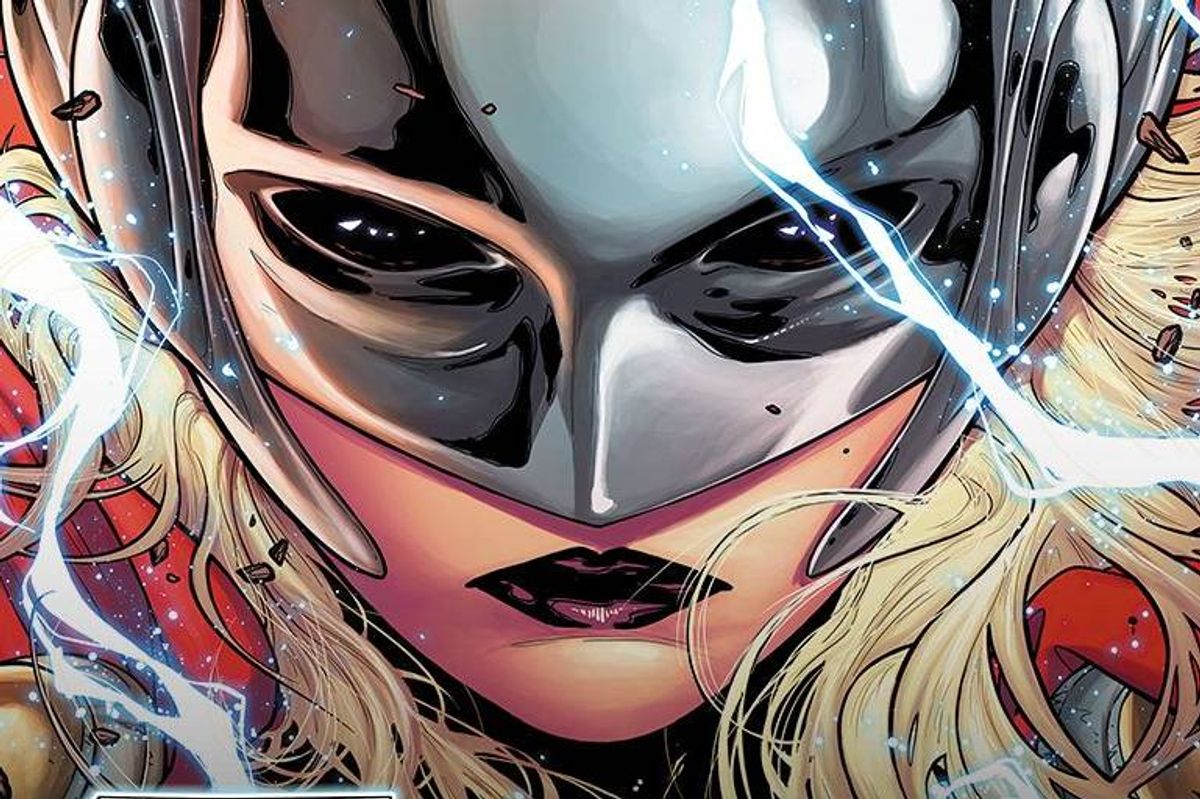 Right-wing parasites, misogynist Men’s Rights activists, and opportunistic grifters who so desperately latched onto Gamergate are on the prowl again. As the culture war within the video game community continues to lose steam from its peak at the end of 2014, the conservative heroes of the anti-feminist movement are desperately looking to continue their fight against the so-called social justice warriors. And they’ll gladly suck the life out of any geek culture they find viable, if it means battling progressives. Their new target? Comic books.

Comic books are in the midst of a bit of a renaissance. Yes, the struggling industry is certainly helped by a never-ending parade of box office smash superhero franchises, but the comic book medium itself is working toward sustained survival through diversity. Black heroes, Latino heroes, Muslim heroes, women heroes — the new face of comics don’t only appeal to the aging, primarily-white male comic book base.

As we’re now seeing, these diverse heroes’ ability to attract new audiences are quite literally helping save the comic book industry for everyone. But conservative vultures don’t care about that — they smell blood in the water. As the culture wars seep further into geek subcultures, they circle a loud subset of geeks, those ignorant fanboys who feel that merely introducing diverse characters into their video games or comic books declares an all-out war on their whiteness and manhood. And these leeches care not about the art of comic books or video games, but what they need to say and do in order to transform angry nerds into brainwashed angry conservative nerds that deliver page views to their websites.

Of all the bloodsucking culture war hustlers, perhaps none come close to approaching Breitbart’s Milo Yiannopoulos when it comes to ludicrous attempts at manufacturing controversy within the geek world. Like many of the right-wing reactionaries, Milo is clueless about video games and cares even less about comics. How do I know? Milo has outright shown pure disdain for the gaming community he was trying to win over, of course, before he realized there was market potential waiting to be tapped. And he’s been caught doing it for the comic book audience too.

if you're not yet reading the fantastic new Thor comic then here's a little something to give you that extra push pic.twitter.com/zGkdgIH6hP

While the new, diverse comic book heroes all seem to have pissed off their fair share of crybaby reactionaries, none has drawn the ire of the Internet assholes quite like the new Thor. Their favorite musclebound alpha male has been substituted — by a woman. And with that, the vultures swoop in. In an article for Breitbart titled "Female Thor Is What Happens When Progressive Hand-Wringing and Misandry Ruin a Cherished Art-Form," Milo opines about the new “gender swapped” Thor. He complains about how comic writers are being forced to push forth this progressive narrative, forced to transform male characters into females. This, of course, will ruin comic books forever!

The only problem with Yiannopoulos' article is the entire thing. There’s no “gender swapping” in the new Thor. The man known as Thor, the son of Odin, is in the new comic book series. He hasn’t been “replaced.” He exists. In the story line, Thor becomes unworthy of wielding Mjölnir, his hammer. An unknown woman — a completely original character separate from the man formerly known as Thor — lifts the hammer and becomes the new Thor. The woman is now Thor. The fact that a woman playing Thor would cause such outrage, when even a frog is able to take up the title of Thor sans controversy, is absurd.

Once the fact that the son of Odin is actually in the comic series alongside the new Thor and that this is an integral part of the story — which Yiannopoulos clearly did not read — haters usually resort to attacking how a woman as Thor goes against Norse mythology. But, while Marvel’s Thor is based on Norse myth Thor, they are not one in the same. Norse myth Thor also, unlike Marvel’s Thor, does not speak English, did not originate inside the body of a med student named Donald Blake or join up with a genetically modified American patriot, an eccentric billionaire with an iron suit, and a giant green monster to form a superhero super group. Making its way around the Internet is this panel from Thor No. 5 — which totally irks the anti-feminist set — in which Thor punches a creep for "saying feminist like it's a four-letter word."

Their complaint is that the new Thor’s dialogue is bad — in these panels that were actually written as a response to their underlying complaint about a strong lead feminist woman showing up in "their" comics. The dialogue is bad compared to what? Male Thor’s long history of cringeworthy lines?

If this all sounds preposterous, wait until you hear what Milo actually cops to getting wrong in his comic book article. In a correction tucked away at the bottom of the page, Yiannopoulos explains that no, the new Spider-Man Miles Morales is, in fact, not bisexual, as he claimed in his post — he is biracial. Oops! But one thing you won’t find in Yiannopoulos' corrections is the entire paragraph he omitted when it was pointed out to him that the data he was presenting actually proves his entire point wrong — an entire section of the article, still wrongly being parroted by the brainwashed reactionaries, removed with no note or correction. (Milo’s ethics-senses not tingling?)

The data this Breitbart buffoon so ethically removed were the over-the-counter sales numbers of the new Thor comic as reported by comic book distributer Diamond Comics. Milo pointed out that “sales of the Thor comics plunged from 150,682 to 69,497.” But of course they did and, no, it’s not because new Thor is a woman — he’s comparing issue No. 1 of the new Thor to issue No. 4 of the same series. In the comic industry, No. 1’s of any series always sell more and then dip after. This is due to a multitude of reasons, ranging from collectors who buy first issues to readers who simply want to try out a new series. The real data to analyze would be how the new Thor is selling in comparison to the previous series featuring the male Thor.

When looking at the sales figures for the previous Thor Series, Thor: God of Thunder, you’ll find it debuted with 110,443 sold and dropped to 50,478 sold by issue No. 4. When comparing the numbers, you’ll find that the new Thor series, the one starring a feminist woman, is outselling the previous Thor series. The new Thor’s numbers hold strong too, as the new Thor series finds itself consistently in the top 10 comic sales each month. The most recent issue, the one with the feminist dialogue that caused mass hysteria online among the right wingers, saw no drop in sales from the issue before it. By Odin’s beard, the new Thor has found her audience and it’s greater than the old, male Thors.

This doesn’t end with Thor.

Marvel’s All-New Captain America is one of the more recent comic book series that has caused angry baby fanboys to wet their diapers. Why’s that? This Captain America is black. (I don’t recall anyone complaining when Captain America’s white sidekick Bucky became the Cap.) The cause for this outcry, according to these most-definitely-comic-book-reading complainers, is that Captain American is only black for the sake of diversity.  “Marvel should just give this black guy his own superhero identity!” Except, if you actually read the comic, you’d know this black superhero is his “own” superhero. At the request of an elderly Steve Rodgers, the original Captain America, Sam Wilson, better known as Falcon, takes up the red, white and blue shield. Heck, this isn’t even the first time a black man has taken up the Captain America moniker.

One of the most popular new Marvel series stars Kamala Khan, a Muslim teen who becomes the new Ms. Marvel. The series has received critical acclaim from longtime comic book fans and new readers alike, yet some hope this “social justice warrior” comic will fail. In January 2015, the anti-diversity crusaders thought they found reason to celebrate: Ms. Marvel did not break the top 100 comic sales for the month. The surprise hit series wasn’t expected to make it past issue 7. Was the anti-diversity crowd right in saying these comics would turn away their “real audience,” a mostly white male customer base, and fail? No. The reason Ms. Marvel wasn’t on January’s top over-the-counter comic store sales list was because there wasn’t a new Ms. Marvel issue released in that month. We’re talking about a new comic book hero who is so popular, her first issue received a seventh printing — that's an accomplishment usually reserved for major titles like X-Men, Spider-man, and Batman. And while Marvel doesn’t release hard digital sales data, they have gone on the record stating that Ms. Marvel is their No. 1 digital seller, even outselling those classic comic mainstays like the X-Men.

A common tactic used by right-wingers is the call to “stop politicizing everything” — while at the same time trying to push forth their own political agenda in the culture wars, of course. Keeping politics out of any art form is laughable, but there is a certain extra level of hilarity in attempting to do so with one that already has a long history of social justice. (One of the most successful comic book series is literally called the Justice League, after all.) And no, social justice warriors have not developed a form of time travel just to break into DC Comics HQ and edit an issue of Green Lantern — these are actual panels from an actual Green Lantern co-starring Green Arrow comic from April 1970 addressing racial justice head-on.

Most recently this vile new culture war movement found controversy in the cancellation of a variant, or alternate, cover for DC Comics’ Batgirl. The cover, featuring the Joker holding a fearful Batgirl captive, caused a debate within the comic community. Many whom the right wing would call “social justice warriors” found the cover to be disturbing and not fitting of the tone of the current series. The cover artist and DC ultimately decided to cancel the cover. The right-wing reactionaries and anti-feminists pounced on the news. Working against them, however, was the fact that some of these SJWs taking up arms against the cover were actually the writers for the Batgirl series themselves.

As the new culture wars wage on, get used to the right-wing grifters and their failed attempts to co-opt. Until next time, true believers.