Celebrities are rarely funny in the New Yorker: Here are the bold-faced "Shouts & Murmurs" bylines you can actually trust

From B.J. Novak to Bob Odenkirk, some stars do pull their own weight in the New Yorker's humor column 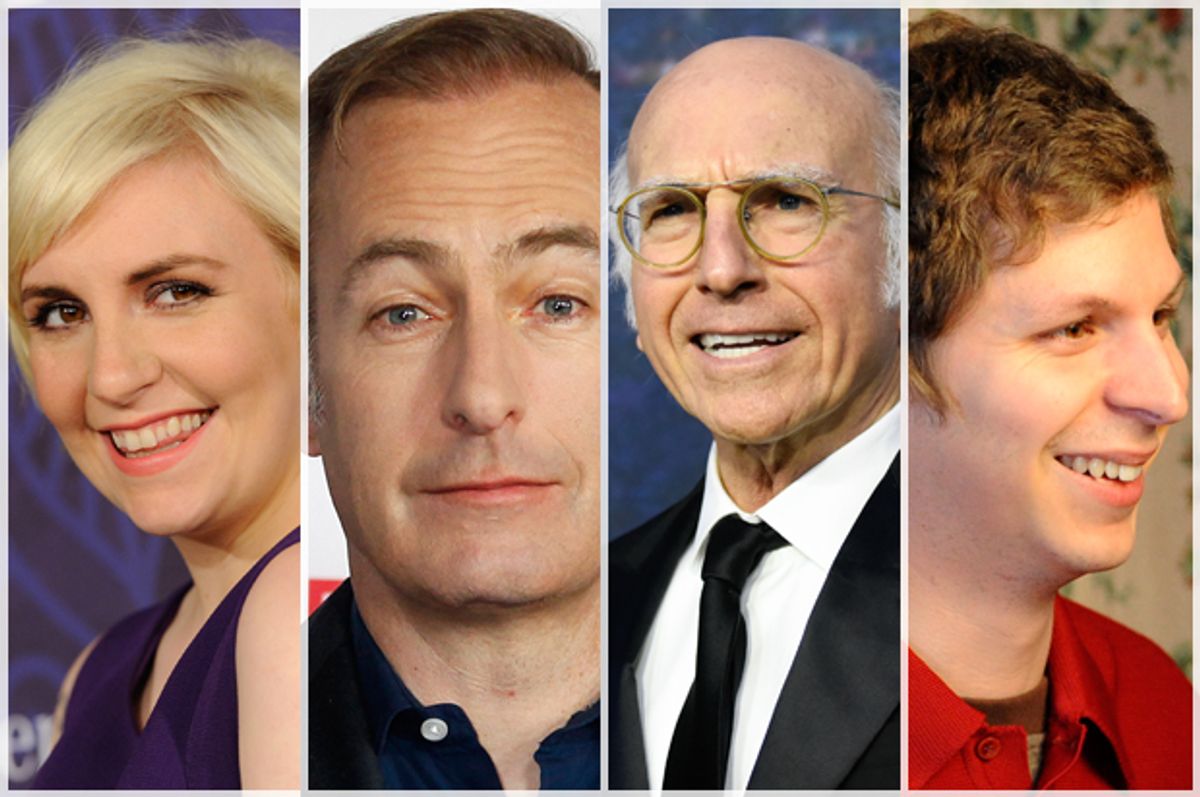 Frequent New Yorker essay contributor Lena Dunham published her first “Shouts and Murmurs” column for the magazine this week, and it was… okay. The piece, "Dog or Jewish Boyfriend? A Quiz," was a cute (but not exactly inspired) riff on what it's like dating a jewish guy ("Bald men trigger a primal fear in him"), directly plucked from her own experiences — as she said on Instagram, the piece is a "love letter" to her boyfriend Jack Antonoff and her dog Lamby.

It’s well known that if you’re a bold-faced name, you’re more likely to have your piece accepted for the New Yorker's iconic humor page, regardless of  the quality of your writing. But does that easy access mean a celebrity column is automatically awful? Well, sometimes. But not always! Here are eight truly great celebrity-penned "Shouts and Murmurs" to reaffirm your faith in humanity:

1. Nora Ephron, "The Girl Who Fixed The Umlaut"
What else would you expect from Ephron other than sheer brilliance? Ephron wrote for the magazine a lot — from fiction to Talk of the Town pieces — but one of our favorite pieces from the late great scribe is her 2010 “Shouts” column, “The Girl Who Fixed the Umlaut,” a spot-on parody of Stieg Larsson’s “Girl With the Dragon Tattoo” novels. Unlike some of the more abstract columns the magazine publishes, this is a precise and inspired parody of a timely trend, and Ephron absolutely nails Larsson’s style, hitting on all the ridiculous tropes of the series, from the vague Swedish place names to the staccato sentences.

But where in Sweden were they? There was no way to know, especially if you’d never been to Sweden. A few chapters ago, for example, an unscrupulous agent from Swedish Intelligence had tailed Blomkvist by taking Stora Essingen and Gröndal into Södermalm, and then driving down Hornsgatan and across Bellmansgatan via Brännkyrkagatan, with a final left onto Tavastgatan. Who cared, but there it was, in black-and-white, taking up space. And now Blomkvist was standing in her doorway. Someone might still be following him—but who? There was no real way to be sure even when you found out, because people’s names were so confusingly similar—Gullberg, Sandberg, and Holmberg; Nieminen and Niedermann; and, worst of all, Jonasson, Mårtensson, Torkelsson, Fredriksson, Svensson, Johansson, Svantesson, Fransson, and Paulsson.

2. Bob Odenkirk, "Portrait of the Artist"
Odenkirk has a real knack for the sort of absurd, playful tangents that work well in “Shouts and Murmurs” — a skill he often displayed on "Mr. Show" — one of the cleverest being “Portrait of the Artist,” which reflects on the bizarre nature of art world fame:

He has never made a film or a painting, nor has he written a poem, taken a picture, or tried to “make” anything. Despite all this, he has fascinated the art world and captivated New York society for the past year. He’s been praised as “unfathomable at best” and “bafflingly circumlocutory at worst” by ArtFinger. He scores twelve out of ten on BaffleMag’s “Scoring the Downtown Scene,” and has been named a “Notable Nelly” in ArtScrape Magazeen’s midyear wrap-up three times in the same list.

3. Michael Cera, "My Man Jeremy"
Cera’s piece was a little darker and weirder than the average “Shout,” riffing wryly on his own celebrity and, much like in “This is the End,” playing up his egocentric asshole persona in the form of a series of text messages he exchanges with a stranger.

4. Steve Martin, "72 Virgins"
The legendary comic has contributed to “Shouts and Murmurs” upwards of 30 times, and there's a reason Martin keeps getting invited back -- he has the dry, off-kilter humor of the page down pat. It’s super hard to pick a favorite, but here's his most recent piece, "72 Virgins," from 2007, in which he envisions the experience of the 72 virgins supposedly awaiting martyrs in heaven:

Virgin No. 11: First you’re going to have to show me an up-to-date health certificate.

Virgin No. 13: Do you want the regular or the special?

5. Woody Allen, "Money Can Buy Happiness -- As If"
Like Martin, Woody is a master of the “Shouts and Murmurs” format and a veteran of the page, and there have been multiple compilations of his New Yorker pieces published in book form over the years. This 2011 piece shows that he’s still got it, brilliantly riffing on the financial crisis through the lens of Monopoly. It’s the kind of cerebral, high concept premise that few but Allen could pull off:

With the economy in shambles, his job gone after Lehman Brothers folded, Litvinov was tortured by indecision over the choice before him. Should he risk everything and buy Marvin Gardens, or leave his money in tax-free bonds until he passed Go? The Dow had plummeted another hundred points that day, and a colleague of his had collapsed with a heart attack while on Free Parking. Word was that the man had picked a card that read "You Have Won Second Prize in a Beauty Contest—Collect Ten Dollars" but failed to declare it. Now the I.R.S. had discovered that the ten dollars was hidden in an offshore bank account and had begun investigating.

6. B.J. Novak, "The Man Who Invented the Calendar"
As we know from Novak’s recent humor collection, "One More Thing: Stories and Other Stories," The "Office" alum is an incredibly imaginative and perceptive writer, and his "Shouts" pieces are no exception. The best might be his 2013 piece which imagines what it must have been like to, well, be the guy who invented the calendar. Like all of Novak’s stuff, it’s inventive and zany, with punchy one-liners and a current of darkness running underneath (“June 29th—Met this really cool girl Jane at a stoning”).

April 1st—A lot of shenanigans today, like pranks (which are lies for no reason). People say it has something to do with the calendar, which I wasn’t crazy about. But I guess it’s good when your invention takes on a life you never expected. That’s what the inventor of the scarf told me—it was originally supposed to be a weapon.

7. Simon Rich, “I Love Girl”
Okay, it's debatable what came first, Rich's fame or his New Yorker writings -- the thirty year old scribe is one of the more prolific "Shouts" contributors -- but we'd be remiss not to include "I Love Girl," which is simply one of the funniest pieces the magazine has published in a long time. Much like his new show, "Man Seeking Woman," Rich’s exploration of cavemen in love is a smart premise brilliantly executing, displaying his unparalleled ability to take something familiar (love) and making it strange (prehistoric) in the best way. (Here's Michael Ian Black reading the piece as a bonus).

I love Girl. I will explain what that is. When I look at her, I feel sick like I am going to die. I have never had the Great Disease (obviously, because I am still alive). But my uncle described it to me. He said there is a tightness in your chest, you cannot breathe, and you have anger toward the Gods. I was going to ask him to explain more, but then he died. My point is: Girl makes me feel this way, like I am going to die. There are many women in the world. By last count, seven. But she is the only one I ever loved.

8. Larry David, "Fore!"
This is kind of a cop out, but we really love Larry David’s contribution about experiencing the stages of grief after he realizes he is a bad golfer because it’s so quintessentially Larry. You can hear his voice as you read the angry ranting — in fact, the following scenario could easily be a scene from “Curb Your Enthusiasm":

There was a time when I was always angry on the course. Driving fast in the cart. Throwing clubs. Constantly berating myself. 'You stink, four-eyes! You stink at everything. You can’t even open a bottle of wine! You can’t swipe a credit card at the drugstore! You can’t swipe. And you’ve never even been to the Guggenheim. The Guggenheim! And call your parents, you selfish bastard!'  Then I’d walk off the course and vow never to play again, only to return the following week for more of the same. I hardly ever finished a round. Once, I bought a brand-new set of clubs, and then, after a particularly terrible day, I gave them to the caddy at the sixteenth hole and left.