"Fart" is a four-letter word: The adolescent language fixation that shaped our love lives 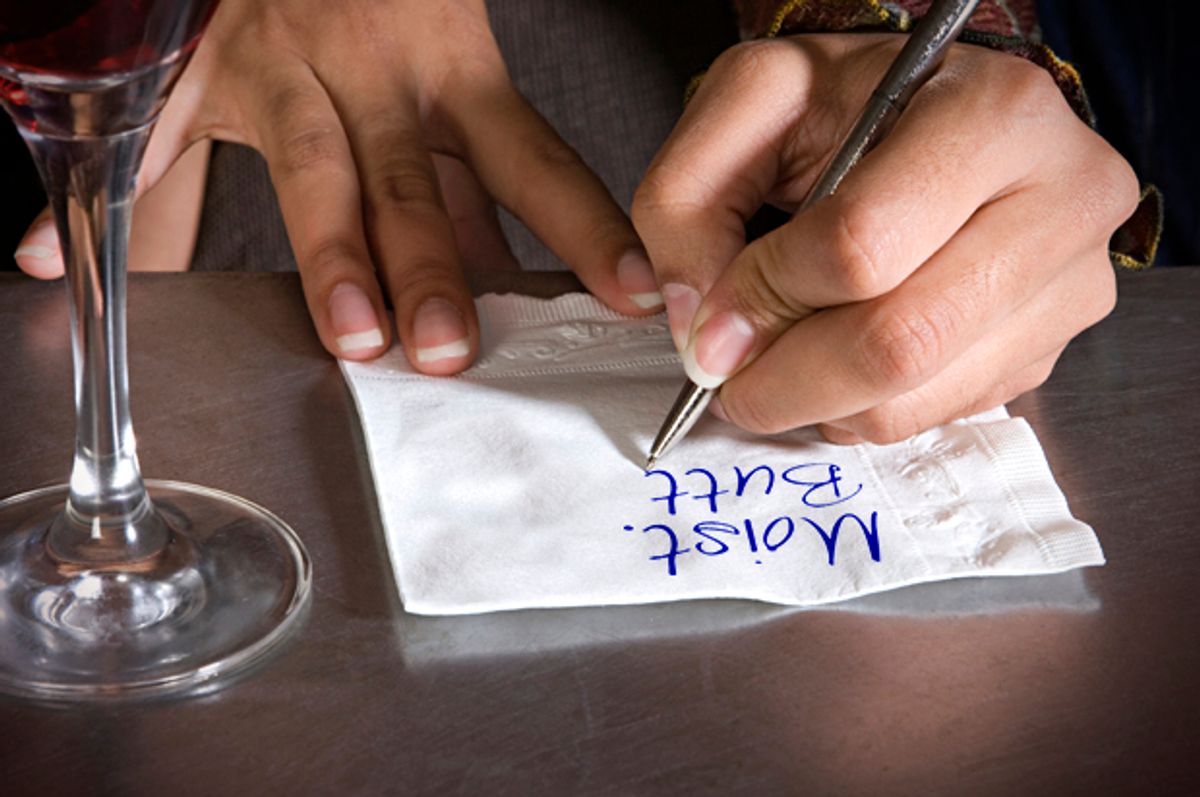 I was minutes before a second date with an Irish guy I liked a great deal when a text from him popped up on my phone. It said something along the lines of, "If you're late, I'll have to kick your butt!"

It was meant to be flirtatious, but it stopped me dead in my tracks. He'd used the dreaded b-word. Why oh why? This could be a problem for us. I was going to have to say something. God only knew what other awful words the Irish might use.

As we sat across from each other at a candlelit table, he reached for my hand, and instead I handed him a napkin onto which I'd scrawled two of my most hated words. "Listen." I smiled at him. "I know this is weird, but if you could keep from saying these words, it would be really great."

He eyed me warily, perhaps wondering if this was a standard American custom -- the word exchange. He flipped the napkin over, and read aloud: "Moist. Butt."

I instantly regretted the order in which I'd written them down. This was certainly not the romantic imagery with which I intended to kick off the night.

"I have a problem with certain ... words," I sputtered. He nodded slowly, and I waited to see if he was going to excuse himself, hop a cab to JFK, and slip quietly back across the Atlantic.

When I was growing up, my family developed our own unique form of communication. This kind of makes sense, as we are the size of a small Sioux tribe -- I have six brothers, one sister, and 13 nieces and nephews -- and while our language may lack the majesty of the Sioux, it is nearly as voluminous. We call ice cream "beluga," a remote control a "mocha" and bathing "souping." Partly this can be attributed to my father, who loves wordplay, and will happily address anything or anyone with gibberish. He found his children's early attempts at speech hilarious, and he held onto our garbled words, encouraging the mispronunciations.

However, there is little doubt that a big part of our family's special language can be attributed to my parents' minor Freudian hangups. They absolutely abhor "bathroom words." They share such an intense aversion one wonders if this wasn't what united them to begin with. I picture them meeting -- my father, 6-foot-4, handsome, a golf enthusiast and virtuoso insurance salesman, approaching my mother, 5-foot-7, the former Miss Clark County.

"Would you like to have dinner sometime?" He'd wink. "And maybe later, we'll have a baseball team's worth of children?"

"Why I'd love to!" My mother would flash her blue eyes, discreetly adjusting her bouffant.

"Excellent." My father smiles. "Oh, and by the way, I hate all words related to the excretory system. Maybe we can make our children hate them too?"

It's easy to imagine the scene. After all, my parents have been married over 40 years and still hold hands. And while they have many other things in common -- a mutual love of iceberg lettuce and watching the television at ear-shattering levels, to name two -- perhaps one of their greatest bonds is a disgust for those words that rhyme with shmart, shmoop and shmee.

As you can see, they successfully passed this visceral loathing on to their children, as I cannot even type the actual words without shuddering. Nor can I, at the ripe old age of 35, stand to hear them spoken.

Perhaps not surprisingly, my parents' modesty spilled over into s-e-x terminology as well. To be fair, we didn't exactly live in Berkeley, Calif., with 9-year-olds openly shouting, "Mommy, my vagina itches!" This was the '70s and '80s in the suburbs of Indiana. Many families employed a certain slang with these words, and not just because "rectum" is a difficult word for a toddler. For many, it's a given that girls have their "coochie" and boys have their "weiner." But not us, thank you very much. A brief dictionary sampling displays words that were all our own.

Tink (verb) -- to urinate: "He just tinked into a root beer can while driving!"

Tote (noun) -- both the male and female genitalia: "Jo kicked Marty in the tote!"

(That last one conjured confusing imagery of my mother lactating from a fold in her arm.)

My mother maintains that our code was established not just in defiance of the shmoop shmee world order, but also because it allowed us to communicate in public about more delicate issues without embarrassing everyone within earshot. And her plan worked well. Try to do a quick translation of the following: "Mom, I just booed, and now my bo burns."

See? Our secret code saved her dignity, and everyone else's.

But moving through the world with our own special language also presented challenges. On Halloween, when a well-meaning classmate handed me a Tootsie roll wrapped like a ghost in a wad of toilet paper with a decorative sticker that read, "Boo!" the association was immediate, and the chocolate treat was thus rendered inedible. And no matter how handsome Bo Duke looked when he jumped into the General Lee, I could never get past the image his name conjured.

Perhaps the trickiest part of having our own personal phraseology, though, was making the transition into adulthood. It was always a trial meeting new friends or potential love interests, and then forcing them to convert and speak as you dictated. It's tricky to tell someone they can't say certain words or you will gag. It's even trickier to get this across without looking like you spend most of your time in the attic eating paint chips and styling your doll collection. But at the same time, it must be done. You don't want to start quietly loathing your date simply because every time he says he has to "pee," a small part of you dies.

One of my brothers once broke off a two-year relationship with a girlfriend who dared to defy our word fascism. After she suffered a minor, accidental flatulence incident, my brother stared at her in horror, as though she'd just pulled the family dog's bloodied head out of her purse. To make matters worse, she chose not to slide under the table and cower in shame, as one would expect, but instead, she rolled her eyes at his disgust, and shouted, "Jesus! It's only a fart! Get over it!!"

At that, the death knell sounded, and she never graced our door again.

I can relate. I've had the "word conversation" with countless people over the years, and it's always a gamble how they will respond. Lucky for me, that Irish guy I liked so much did not flee the table that night, or back away with a nervous look in his eye, as if I had just offered to come stand over him and watch him sleep. He was either brave or frozen with fear, but fortunately for me, he decided to stick around. We even married eventually, and over time he was forced (as everyone is) to accept my family vocabulary.

But David is Irish, and he came to me trailing his own stream of nonsense words, which meant, for the first time in my life, I was given a taste of my own medicine. I had to learn about "cacks" and "chancers," and that it wasn't a term of endearment when he called me a "big balloon." The first time he saw a sign that read "Do Not Feed the Pigeons," he laughed and waggled his eyebrows. I had no idea "feed the pigeons" was an Irish term for self-pleasure. (Why? Pretend to feed some pigeons. See?) We were both guilty of this whole word scramble business. It's just that mine was a product of parental brainwashing, while his was more of a cultural brainwashing. Regardless, David was in no place to criticize my language quirks. A man who says he has to "go for a slash" when he has to urinate, but then uses the phrase "taking the piss" to imply he's joking around -- well he can't really dispute the silliness of the word "tink."

Back in our courting days, we delighted in learning every little detail of each other's jargon. There could be wonder in discovering something as mundane as the other's term for diarrhea. (Him: "The skitters." Me: I am going to sit very, very still until we can pretend we aren't talking about this.) But now, as settled, married folk, our patience with each other's word weirdness has waned slightly. If David garbles something unintelligible that results in yet another round of "whats?" and "huhs?" I sometimes just want to sigh and ask him why, if someone is annoying him, he can't just say they are annoying him? Why must it be that they are "getting on his tits"?

And David, for his part, now occasionally delights in torturing me by unleashing a torrent of words that he knows will make my ears bleed. Just the other night when walking home, he randomly began a monologue about f*rts and b*tts, and were it not for the faint sing-song quality his accent lent those wretched words, I might have shoved him in front of a passing bus. As it was, all I could do was laugh. At him, for sounding like a kindergartner at recess, and at myself, for responding just as I would have in kindergarten: with horror.

At the end of the day, I know that no matter what we might call our body parts or bodily functions, he is now my family. And it both delights and surprises me that we have the beginnings of our own special language. As the years go by, and we chatter and eat and kiss and move together through the days, our words flow and settle around us. Some might be angry, some insipid, some may sound like the mutterings of Ewoks. But I know all of this noise knits us closer. The words become mashups, they combust and combine, twisting into the secret code of our own tiny family unit. Just as they once did for my insurance salesman father and beauty queen mother, as they held hands and faced the future, and tried to pretend that flatulence didn't exist. The language of family is wholly unique, and to speak it is to be fluent with the people you most love, as well as the people who drive you the most insane.