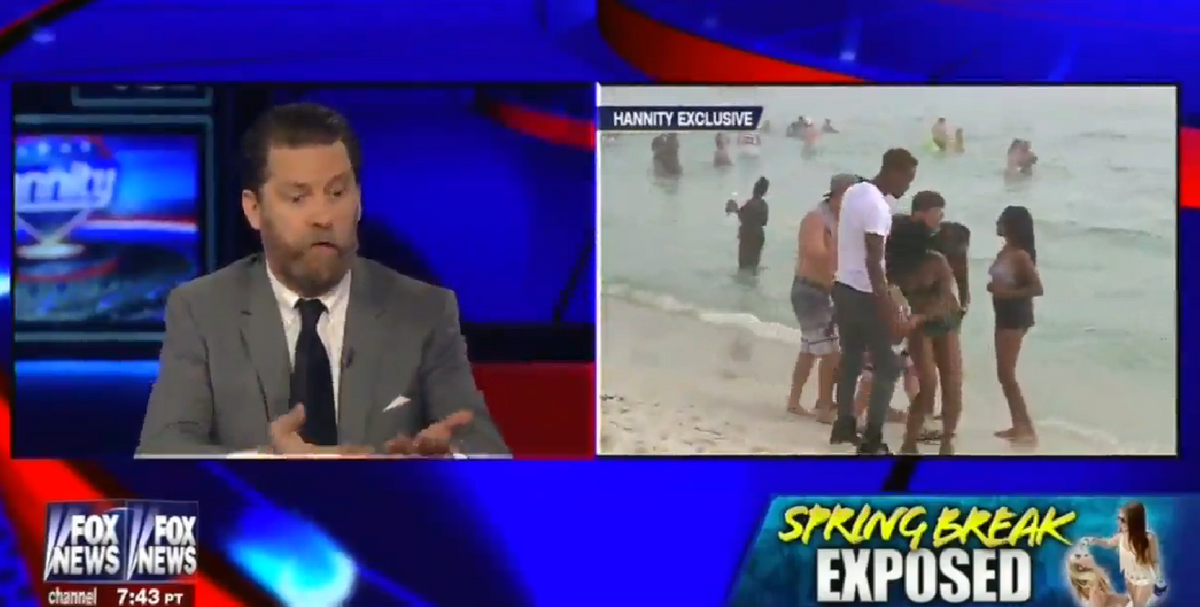 Rejoice, for it's Sean Hannity's favorite time of year: Spring break! The Fox News host indulged in one of his favorite segments on Tuesday to discuss the debauchery of college-age spring breakers in Florida, accompanied by a panel of guests and plenty of B-roll footage of young women in bikinis.

The young women, of course, quickly became the central focus of the panelists' discussion, as Vice founder and Fox News contributor Gavin McInnes lamented their presence on the beach. Responding to "Fox & Friends" co-host Ainsley Earhardt's account of one young woman being sexually assaulted on spring break, McInnes blamed feminist attitudes toward sex and gender equality for the high incidence of violence.

“This is a perfect example of liberals’ cognitive dissonance, where they say, ‘Everything’s cool -- hey, it’s spring break, people party, women are the same as men,'" McInnes said. "When you have that stupid lie in your mind, you end up making women more vulnerable. These women are not as strong as men, and when you let them go down there, you're a terrible parent."

McInnes added that those who let their sons attend spring break are "fairly bad" parents, but it's simply not as horrifying to allow young men to head to the beach to get drunk and do drugs. Later, the Vice founder stood by the double standard he set up, saying it reflects the differences between men and women.

"You think that there's a difference if a parent sends a son or a daughter," Hannity said. "That's kind of a double standard."

"Of course it is," McInnes replied. "We're different. Sorry, equality is a myth. Women aren't as strong as men -- they can't even hold their booze as well as men."

Co-panelist Chloe Melas took issue with the generalization, and was joined by Earhardt in calling McInnes out. "That's not true," Melas said. "That's a blanket statement that you can't say."

"'Boys will be boys'? That is so archaic," Earhardt added.

"But one is much more scary than the other," McInnes interrupted. "You're making women less safe. That attitude makes women less safe. When you say, ‘Boys will be boys and girls will be girls, they’re all the same’ -- no, women are more vulnerable. And the most you can do is drill into your daughter: You're vulnerable.”

Earhardt responded by criticizing a social double standard that allows men to get away with lascivious behavior without acquiring a "reputation," prompting McInnes to repeat his message for young women. "Right, so drill that into your daughter and say, ‘You’re weak, you’re vulnerable, you’re not a superhero, you’re in danger,'" he said.

"Why don't we drill it into our sons not to take advantage of women?" Earhardt asked.

"We do -- they go to jail for 15 years for these crimes!" McInnes shouted over her.

Watch the segment, via Media Matters, below: