Once the HBO series catches up to George R.R. Martin's books, I'm outta there 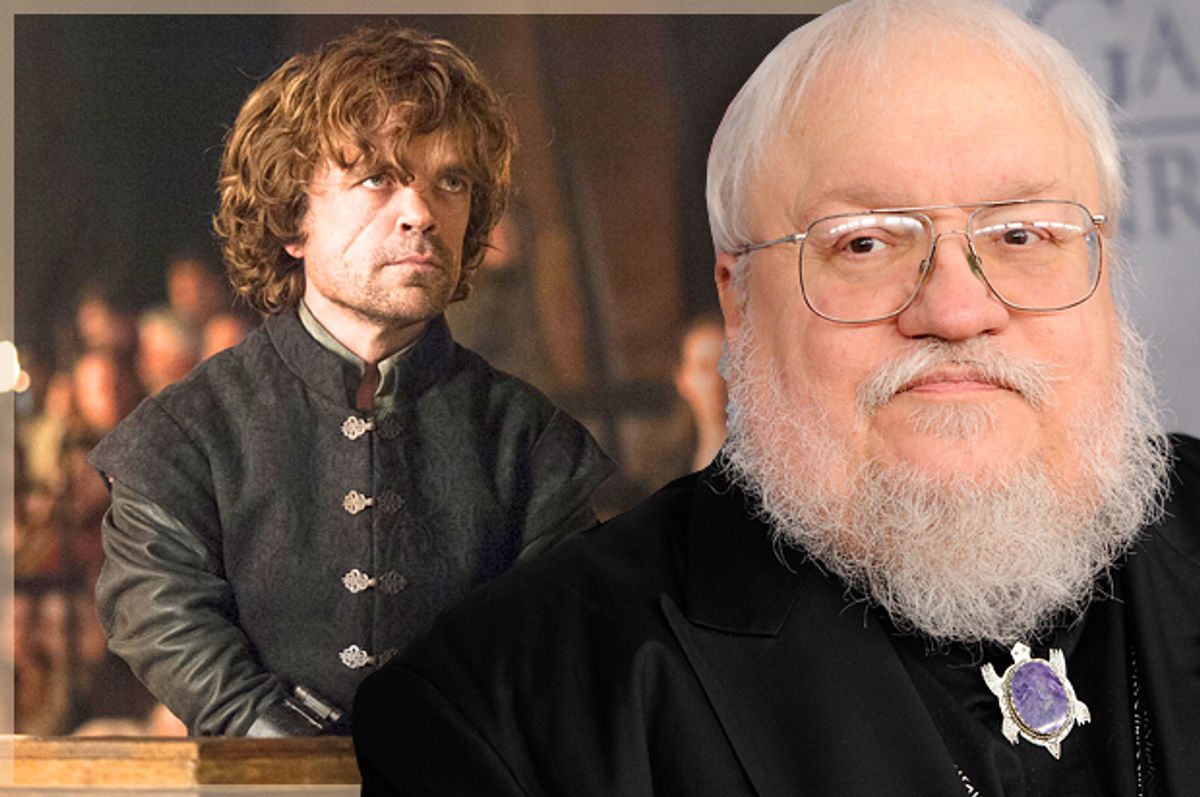 When the two show-runners of HBO's "Game of Thrones" confirmed over the weekend that they expect the forthcoming fifth season to catch up to the book series on which it is based, fans of George R.R. Martin's "A Song of Ice and Fire" were confronted with a dilemma. If they preferred to experience the author's version of the story first, should they abstain from watching the TV series entirely? Would that even work? After all, you probably know how "The Sopranos" ended even if you never watched an episode. Between the Internet, print media and old-fashioned water-cooler conversation, it's awfully difficult to avoid being spoiled today.

Fans have long been aware that show-runners D.B. Weiss and David Benioff know how Martin plans to end his epic fantasy series, even though the publication date of the penultimate volume, "The Winds of Winter," has yet to be announced. Given the amount of time it takes Martin to produce each of the series' hefty, complex installments, the release date of the seventh and final book, "A Dream of Spring," is even more uncertain. Martin has a stormy history with fans who feel he takes too long to write each book and who loudly protest every moment he spends on any other activity, from unrelated writing and editing projects to socializing.

So Weiss and Benioff's admission -- made during a promotional event in Oxford, England -- provoked the predictable chorus of howls and curses, along with some more philosophical responses. Over 700 comments blossomed in the ASOIAF subreddit over the course of a few hours. Especially peeved were those who don't like or simply don't watch "Game of Thrones." "I'm going to have to start watching the show just because I really don't want to find out how this whole thing ends from a fucking Facebook status," wrote one irate fan. "I, for one, am outraged," wrote another. "The spoilers will clearly ruin the books and there is no one to blame but the author who couldn't stay in front of the show. ... Regardless of what happens the narrative will be cheapened."

Martin has placed himself in an extraordinary, perhaps unprecedented, position for an author. The TV series that started out as an adaptation of his work will become the original before he completes it. The first five volumes of "A Song of Ice and Fire" were the source for "Game of Thrones." The final two will be, in a fashion, novelizations of it. As one redditor cannily observed, "The guy who hates fan-fiction will have his story co-opted by a couple of fans who, essentially, paid him to get a peek at the last page."

Some redditors have announced triage plans to prevent the TV series from spoiling the books for them. Tactics range from declaring a moratorium on personal conversations about the show to deleting their Facebook accounts. (Skeptics insist they'll have to move into caves to avoid being accidentally tipped off on plot points.) "Spoilers actually completely ruin stuff for me," one explained. "Won't enjoy a story if I know where its going."

I'm seriously contemplating similar measures, although for different reasons. I couldn't care less about spoilers. There's something grating about the obsessiveness with which readers and viewers insist on being kept in the dark about such things, and many seem to regard stories as if they're little more than machines for producing surprise. Ironically, these are often the same readers who become defensive about popular fiction, claiming that it's unfairly stigmatized as less worthy than the books we call literary.

But here's the thing: Literature is not spoilable. This goes for the plots of literary works as well as for their other artful qualities, like characterization and style. Literature feels immediate even when revisited because great stories, unlike magic tricks, are not predicated on startling reveals. You can reread "Anna Karenina" any number of times, with your heart in your throat, hoping she won't make that final, fatal leap. People turn out to see "Macbeth" and "Strangers on a Train" over and over again, tensing up at the climactic moments even though they already know what happens. Our fixation on novelty and surprise has resulted in too much popular entertainment with increasingly contrived plots, all in the service of delivering an empty, forced twist.

But if I'm indifferent to whether "Game of Thrones" gives away who dies or who triumphs or who winds up together in the last two novels of Martin's series, there's something else I'd rather the HBO series didn't spoil. It's a cliché to say the book is always better than the movie, but the reason we so often feel that way is that we put more of ourselves into the book. Reading is a far more collaborative enterprise than watching a film, and as a result I have my own personal version of Cersei Lannister (more delicate-looking than Lena Headey), a less Mediterranean picture of King's Landing and a different sense of how Arya's flight through Westeros felt.

I don't object to the way these elements of "A Song of Ice and Fire" appear in "Game of Thrones." I also don't, as some readers might, view them as simply wrong. I enjoy most of them, but to my mind, however closely the series hews to Martin's novels, they're just another version of the story. Above all, they're a secondary version, in much the same way that a biopic is an alternate interpretation of an actual life, never to be mistaken for the real thing. The version I get from reading the novels is the one that counts.

Granted, most of the central characters of "A Song of Ice and Fire" are already fixed in my imagination. But any new scenes and characters will, if I see them on-screen before I read them on the page, be usurped by the TV series. I'm rarely able to fully imagine a novel if I've seen the movie adaptation first; my reading of Thomas Hardy's "Tess of the d'Urbervilles" has always been annoyingly dominated by Roman Polanski's film, with the miscast Nastassja Kinski in the title role. Even a not-great movie version retains the image's power to imprint itself on the mind and override anything verbal that comes later.

Will I really be able to resist Season 6 of "Game of Thrones" when it comes along in 2016? I don't hunger to know what happens next -- or at least not as ravenously as many of the series' keenest fans do. For that, I'm content to wait. What I lack is the willpower to forgo excellent TV, especially on Sunday nights, when it's as expected as roast turkey on Christmas Day, and everyone else is happily glued to their screens. When that time comes, no doubt I'll be summoning all my self-discipline and recalling the words of one wise redditor, whose analogy rings true despite the differences in our fears: "You have to either be a Varys/LF [Littlefinger] and play the game of thrones, and go for the course of minimum damage, or be a Ned Stark, stick to a rigid uncompromising view, shut off all social media, and be accidentally spoiled by a moron talking too loudly at the water fountain."