The Kochs take millions in subsidies in Montana, then try to block Medicaid expansion 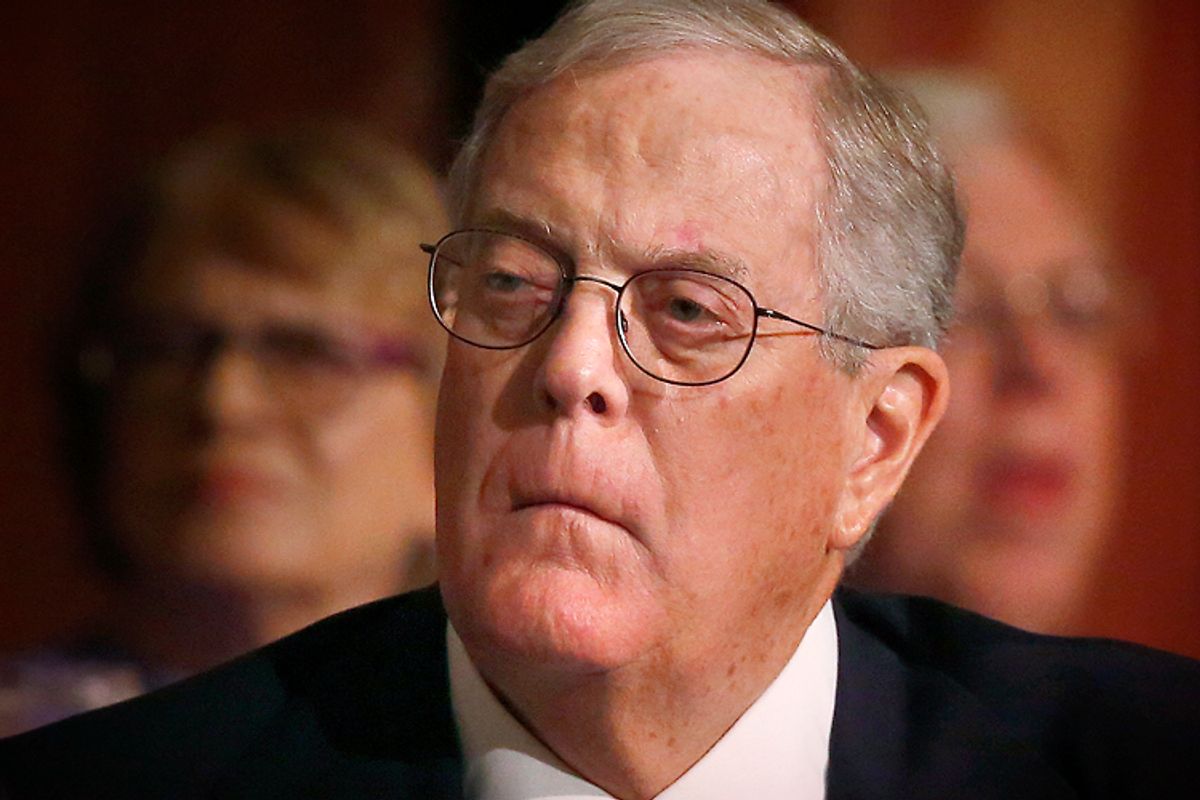 In every red state where they’ve spent big, the Koch brothers have defeated Medicaid expansion, the piece of the Affordable Care Act that is optional for states and gives relief to the working poor.  But in Montana -- by some measurements the reddest state in the country -- the Kochs are hitting the skids.  Their monster political group, Americans for Prosperity, or AFP, has laid an egg.  And Medicaid expansion now has a real chance of happening.

A few things.  First, the Kochs underestimated the local population and made a fundamental misreading of the terrain, as have many outside groups that have botched Montana campaigns (starting with Custer and his troops).  They sent in a crew of young D.C. hotshots with little understanding of the state’s politics, to run a negative campaign against moderate Republican legislators who support expanding Medicaid.  This campaign did nothing but piss off the legislators and their constituents.

Part of this campaign involved organizing a disastrous series of “town meetings” in the legislators’ districts, at which AFP staffers lectured the locals about the dangers of “Obamacare expansion.”  Please take a moment to savor the image of a young man from D.C., showing up in a small Montana town, wearing a tailored suit and dress shirt but no tie, and pointy shoes, looking like he’s expecting bottle service at a nightclub, to address an audience of burly men wearing flannel shirts and overalls and likely carrying concealed weapons.

Worse yet, the GOP legislators being targeted by these meetings began crashing them.  The AFP organizers would refuse to recognize them or even let them speak.  The audiences didn’t like this (everyone gets to speak at public meetings in Montana -- it’s in our Constitution).   At one meeting, someone in the audience asked the AFP organizer, “How can we possibly have a town meeting on this issue but not hear from our legislator?”  There was no answer.  Many in the crowd walked out.  Several of these fiascoes were caught on video.  The town hall debacles were front-page news across the state.

Next, it was revealed that the Kochs own a 200,000 acre cattle ranch in Montana that has received more than $12 million of state and federal subsidies since it was founded. Two-thirds of the cattle operation is on public land, which means the Kochs pay grazing fees that are far below market rates while taxpayers make up the difference.  (In 2011, the state of Montana proposed raising these fees to get them closer to market, and a guy from the Kochs' ranch showed up to the hearing to protest this increase.)

This grotesque set of facts -- two billionaires taking subsidies while trying to block our poorest citizens from getting assistance for medical care -- was not well received by the press or public when it was brought to light.

And then, two weeks ago, another spectacle: the long-awaited hearing on the governor’s Medicaid expansion bill took place.  Hundreds of poor uninsured people, some of them with life-ending conditions, drove in from across state (driving nine hours in some cases) to testify for the bill as did many doctors and hospital executives.  Their testimony went six hours.  In contrast, only 12 people showed up to testify against it, and these were mostly AFP staffers or friends of AFP staffers, ranting about Obamacare.  When testimony was over, the committee, which is controlled by Tea Partyers, voted instantly to kill the bill without any debate at all.  It was unprecedented. There was an audible gasp from the crowd.  Scathing editorials ran across the state in the following days.

Whether the Kochs will win or lose this battle depends on what happens in the next several weeks.  We have a progressive governor, Steve Bullock, fighting hard to get Medicaid expansion through.  Unfortunately the Legislature in Montana meets January through April every odd year, so the stakes are high -- the federal funds will no longer be available if we have to wait until 2017 to expand Medicaid.  But I’d say the odds on expanding Medicaid have gone in the last few months from 30 percent to 70 percent, a change of circumstance due in large part to the ineffectual AFP campaign, which merely angered the moderate Republicans it was designed to intimidate.

This past week, one of those GOP legislators defied the AFP bullies a step further, putting forth his own Medicaid expansion bill.  Democrats, including the governor, are supporting it.  At the hearing, the sponsor asked: “Why would we refuse to accept federal funds we have given the federal government in the form of taxes? It’s our money.”  Nobody had an answer.

And there was a notable absence in the hearing: Nobody from AFP showed up.