The truth is still out there: 5 mysteries we hope the "X-Files" reboot will resolve

From the alien invasion to a Mulder-and-Scully sex scene, "The X-Files" has plenty of material for new episodes 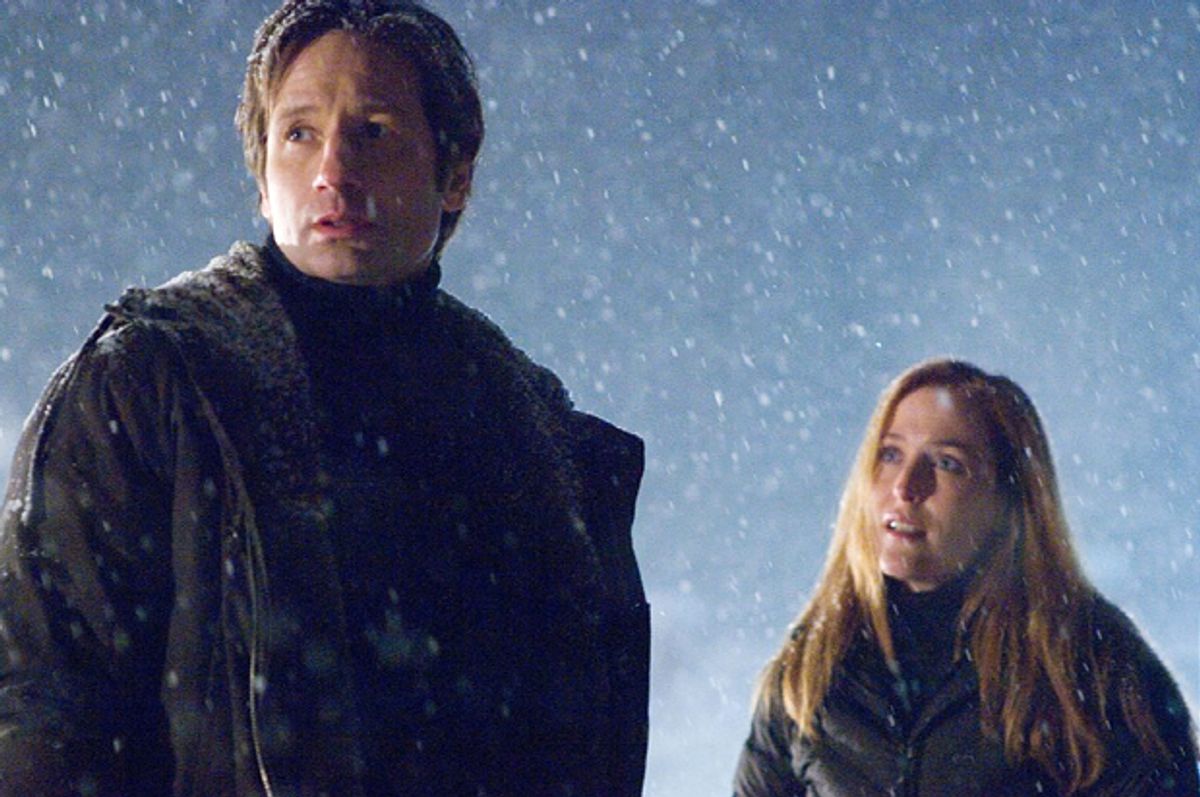 David Duchovney and Gillian Anderson in "The X Files: I Want to Believe" (Twentieth Century Fox)
--

When Fox announced its six-episode reboot of the cult classic “The X-Files” with David Duchovny and Gillian Anderson reprising their roles as Dana Scully and Fox Mulder, X-philes across the Internet chattered with enthusiasm and theories for this final edition. It seems like just yesterday we were treated to Mulder’s deadpan delivery that “the truth is out there,” and a ginger-haired Scully's quizzical glare atop the most heavily padded shoulders and longest suit jackets at Langley. As the bastard child of “The Twilight Zone” with better-looking principles, “The X-Files” won us over with its paranormal scenarios and long-simmering tension between swaggering, moody Mulder and chilly, scientific Scully. You might say it cast a mold that shows have been trying to follow ever since (cough, “Fringe;” cough, “Lost”). But like all great works of art, it was not perfect. With a tendency to leave story lines unresolved or partially stitched, despite nine seasons, more than a handful of dangling or botched subplots left even the most devoted of fans frustrated.

And while six episodes isn’t much of a canvas upon which to right all the wrongs, we have suggestions to the writers for the final epilogue of this pop-culture phenomenon.

1. Bring on the Alien Invasion
The most compelling, taut thread that held “The X-Files” aloft was its underlying mythology: that aliens had been planning colonization of Earth since the 1940s and the U.S. government had engaged in a widespread conspiracy to keep this information a secret. Viewers resonated with Mulder’s personal stake in this story—after all, his sister was probably kidnapped by aliens, and he could sniff out conspiracy like a bloodhound. Not to mention the rescue of Scully from the alien-pod in Antarctica, her subsequent cancer caused by alien microchip, and her half-alien baby! Those events — plus the nefarious aliens, with their oil-spill eyes —kept together what might otherwise have been just a series of weird episodes about freaks, psychics and genetic mutants. So when, in the final episode of the ninth season, the fate of Earth remained more open-ended than Tony Soprano’s, it was hard not to feel dissatisfied. Were the aliens going to colonize or not? The X-Files movie “I Want to Believe” that came out several years later merely proved that aliens must suffer more red tape than the IRS, because they still hadn’t gotten their action plan together. I recommend that the goal of this reboot be to finally bring about the alien colonization of Earth— which would then lead to an awesome spinoff series, “X-Files: End Times.”

2. Resurrect Mulder's Sister Into a Badass Alien Fighter
Mulder’s lost sister Samantha, kidnapped when he was just a boy, was a gleaming kernel of loss at the heart of his tortured character that made his drive for the truth believable. And when Samantha turned up again as an adult, teasing Mulder toward the Smoking Man’s dangerous realm, who wasn’t a little verklempt? Frankly, I will never forgive the writers for their choice of answer to her fate in the seventh season: that she had been “saved” by “walk-ins,” some sort of celestial beings whose purpose was to save the souls of children who were doomed to live unhappy lives. (The grown-up version of her was just a clone.) Biggest cop-out ever! In the reboot, Mulder should dig up fresh intel that proves his sister’s death and its lame reveal are a fantastic coverup for the fact that she is a badass alien fighter on a mission so secret even he didn’t figure it out.

3. Money Shot
Despite more deep gazes and furtive touches laden with sexual tension than a “Bachelor” episode, I’m not sure anyone really believed that Mulder and Scully would become a romantic item. Yeah, we thought the sex would be hot, and who didn’t get a little emotional when one of them busted in at the last minute to save the other from a liver-stealing mutant or a psychic psycho? But if you’re going to consummate a nine-year relationship, you damn sure better do it for all the world to see, on camera. In lieu of that hot sex scene (seriously, couldn’t Mulder have cleared that piled-high desk of his in the basement and tossed Scully down on it just once?), we got an ex-post facto narrative delivered by John Locke, I mean “The Shadow Man,” about how Scully snuck into Mulder's room one lonely night and managed to get knocked up despite approximately 600 failed IVF attempts. Even worse, in the 2008 spinoff movie, while Sculdy (or is it Muller?) are still a couple, rather than shameless sexual chemistry they have the spark of a long marriage that has given way to obligatory sex and peeing with the door open. Now that we've seen Duchovny shamelessly flaunt his libido in Showtime’s “Californication,” it seems only right that this reboot provide at least one overdue flashback to the deed, especially since Duchovny and Anderson have never looked better. Or maybe the reboot could prove that what’s kept them together post-paranormal investigations is alien-inspired BDSM that would make Christian Grey blush.

4. Baby’s All Grown Up
Despite losing David Duchovny in its eighth season, I hung tight to the ninth season due to the mystery of Scully’s pregnancy. Though allegedly barren, her immaculate conception might have been alien, or it might have been Mulder’s. Or both!  Nobody knew. Talk about the unwanted attention pregnancy brings, Scully’s had a funny way of attracting invasive doctors and murderous super soldiers wherever she went. But the alien invasion plotline was still strong and Mulder’s mysterious absence rendered Scully’s paranoia-laden gestation even more heart-rending. We can forgive the writers the deus ex machina  that a simple injection of magnetite rendered baby William purely human again, if they consider this new direction: Fifteen years later, they bring back the unholy fruit of the duo’s loins, now shaving, sullen and demanding the keys to his adopted dad’s truck. He and Mulder can engage in a macho exchange of oneupmanship in which William takes over where Mulder left off in his pursuit of things that stretch our belief for the spinoff, “X-Files: Second Generation.”

5. Bring Back the Lone Gunmen
"The X-Files" never shied away from bringing folks back from the dead. Whether cloned, super soldiers (looking at you Alex Krycek), or straight up bait-and-switch à la the Smoking Man and Mulder’s whiny half-brother Jeffrey Spender, we see no reason that the savviest hacker trio know as “the Lone Gunmen” – Byers, Froehicke and Langly — should remain resigned to their unfair fate of death by nuclear meltdown in the final episode. Fortunately, if anyone on the show was the most likely to successfully fake their deaths and come back from it, it would be these guys. They could play an invaluable part in helping Mulder and Scully figure out how to become alien overlords — or at the very least, offer marriage counseling.

If nothing else, we can hope that Chris Carter and his writers return to the mainstays that made the original run of the show so damn good: witty repartee between polar opposites, a touch of sexual tension and the dark dealings of devious men who hold the fate of humankind in their greasy palms.

Jordan Rosenfeld is author of six books, most recently "A Writer's Guide to Persistence." Her work has appeared widely in AlterNet, DAME, the New York Times, STIR Journal, the Washington Post and more.