Following its nine-year run, "X-Files" has been referenced in countless pieces of pop culture 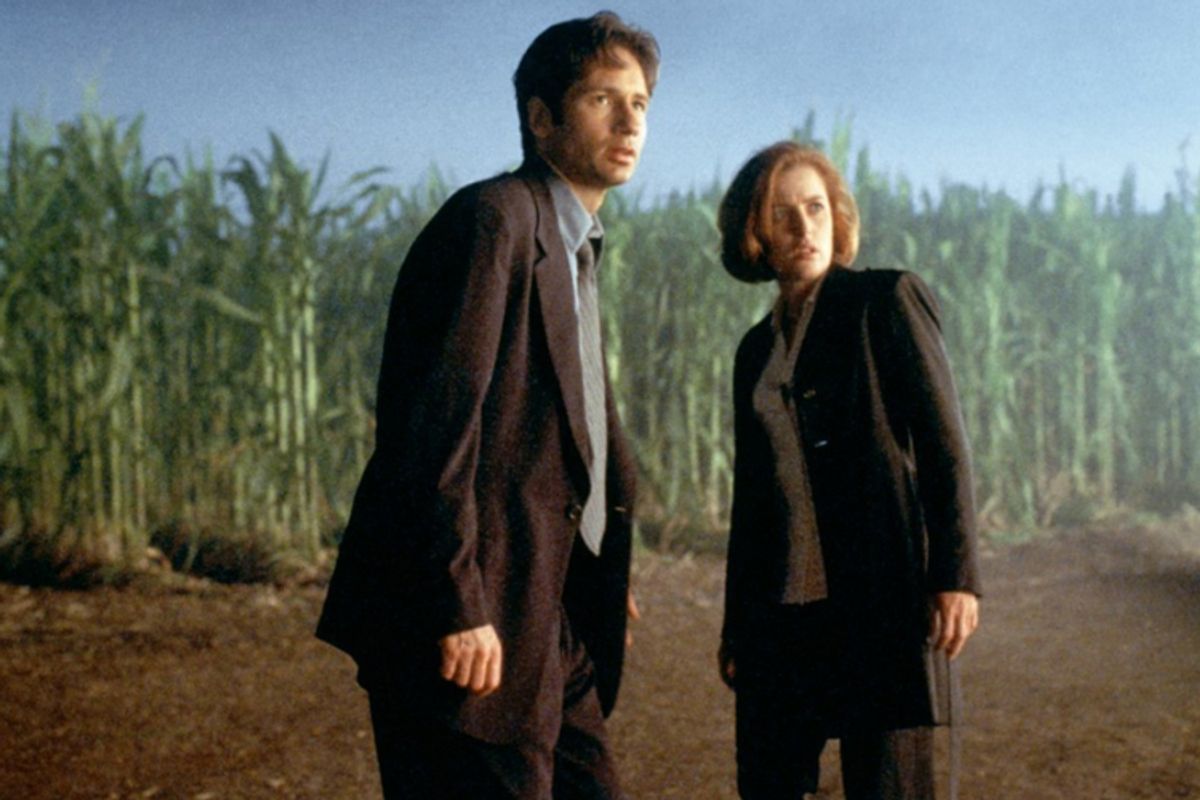 It’s no secret that “X-Files” has produced some of today’s top writing talents. The Fox franchise acted as a “Mickey Mouse Club” of sorts for aspiring television writers back in the ’90s, providing both “Hunted” creator Frank Spotnitz and “Breaking Bad’s” Vince Gilligan their first big writing gigs.

Gilligan has spoken often about how working in the "X-Files" writer's room informed much of his work. In 2013, Gilligan told Huffington Post: "It was a great learning experience, and one that I always liken to film school, except it was a film school that paid me to attend."

With Tuesday's news that Fox will be reviving the beloved FBI series as a six-episode event, it seems as good of a time as any to take a look at how "X-Files" has embedded itself into contemporary pop culture. The show has had a tremendous influence on other working creatives, and we can see proof of this not just in Gilligans' obvious nods to the show in "Breaking Bad" with fictional-brand cigarettes and rent-a-car companies popping up all over the place. But also, in the way screenwriters and songwriters alike have chased that very particular attitude of the show -- that "New Age mysticism" and wry wit. Take for example, Sheryl Crow's chart-topping hit from 1996, "A Change Would Do You Good," which is stacked with moody imagery alluding to"Scully and angel." The black-and-white video accompanying the song features a rage-filled Crow throwing all of her belongings out of an apartment window, before finally jumping out of that window herself. Why is the show mentioned? Well, it's just kinda metal.

And if you needed further proof of the show's ubiquity: Look no further than the podcast called "The X-Files Files" launched last year by Comedian Kumail Nanjiana on Feral Audio. (Who, you better believe, was very thrilled about the show's return.) His intention with the podcast was simple -- to explore favorite "X-Files" cases week by week with guests and perpetually rediscover how well the episodes have aged.

You may be surprised to learn just how many times the long-retired show has been alluded to outside of these few examples. We've collected a bunch of these moments for you below to prove that the spirit of the show never really left us:

"3rd Rock From the Sun"
In season 2's episode "The Single Girl and Dick," Tommy and Harry try writing an episode of "The X-Files" but never finish. (IMDb)

"Archer"
In season 6's episode "Nellis," Archer uses "X-Files'" running tagline on Pam: "The truth is out there," he says. (IMDb)

"American Horror Story"
Jack Colquitt is also the name of someone mentioned in the "X-Files" episode "Musings of a Cigarette Smoking Man." (TOR)

"Big Bang Theory"
Leonard from "Big Bang Theory" says in season 4's episode "The Apology Insufficiency": "So, when Howard said the FBI would be contacting me, I was expecting Mulder. Glad to see I got Scully." (Youtube: Er Para Los Amigos)

"Bones"
"X-Files" writer Howard Gordon was asked in a 2013 interview whether he saw the influence of the show in other forms of pop culture. He responded: "You look at it and you see it in everything from 'CSI' to 'Bones.' I think ['Bones' creator] Hart Hanson wrote a Mulder and Scully reference in the pilot for 'Bones.' I think he sort of hung a lantern or got ahead of anybody who might [compare the two lead characters to] Scully and Mulder." (Huffington Post)

"Breaking Bad"
As things take a turn for the worst in "Breaking Bad," the group is forced to set up meth-lab operations under a big striped tent being fumigated. That same tent appears in the fifth season of "X-Files" during the episode "Post-Modern Prometheus," in which the Great Mutato anesthetizes women and impregnates them. (Vulture)

A pack of the fictional-brand cigarettes, Morleys,  is chucked out the window of an RV during the pilot episode of "Breaking Bad." They connote a sort of impending doom in "X-Files" (Cigarette Smoking Man) -- which, is the intended effect when they make an appearance again in "Breaking Bad" villain Emilio's possession. (IMDb)

Lariat Rent-a-Car is another fictional brand that appears in "X-Files" when Mulder and Scully are looking for a car service. It appears in the final season of "Breaking Bad" (Empire)

Morley cigarettes appear in season 2's 'The Raw and the Cooked" as well as season 5's "Love Song." (IMDb)

"Hey Arnold"
Arnold and Jerald watch an episode of the "The Z-Files." (Youtube: HelgaEpisodes)

Sheryl Crow's "A Change"
"Scully and angel on the kitchen floor
and I'm callin' Buddy on the Ouija board..." (Genius)

"South Park"
An officer tells Stan "You have been watching too much X-Files" in the episode "Pink Eye." (IMDb)

"Two and a Half Men"
Berta says "Yeah, I'm Scully -- this is Mulder" in the episode "Repeated Blows to His Unformed Head." (Youtube: Forever Alone)