Hey, white Hollywood: Looking for work in the age of "Empire"? Here's some friendly advice

The "ethnics" are invading TV!! What's a struggling white actor to do?! 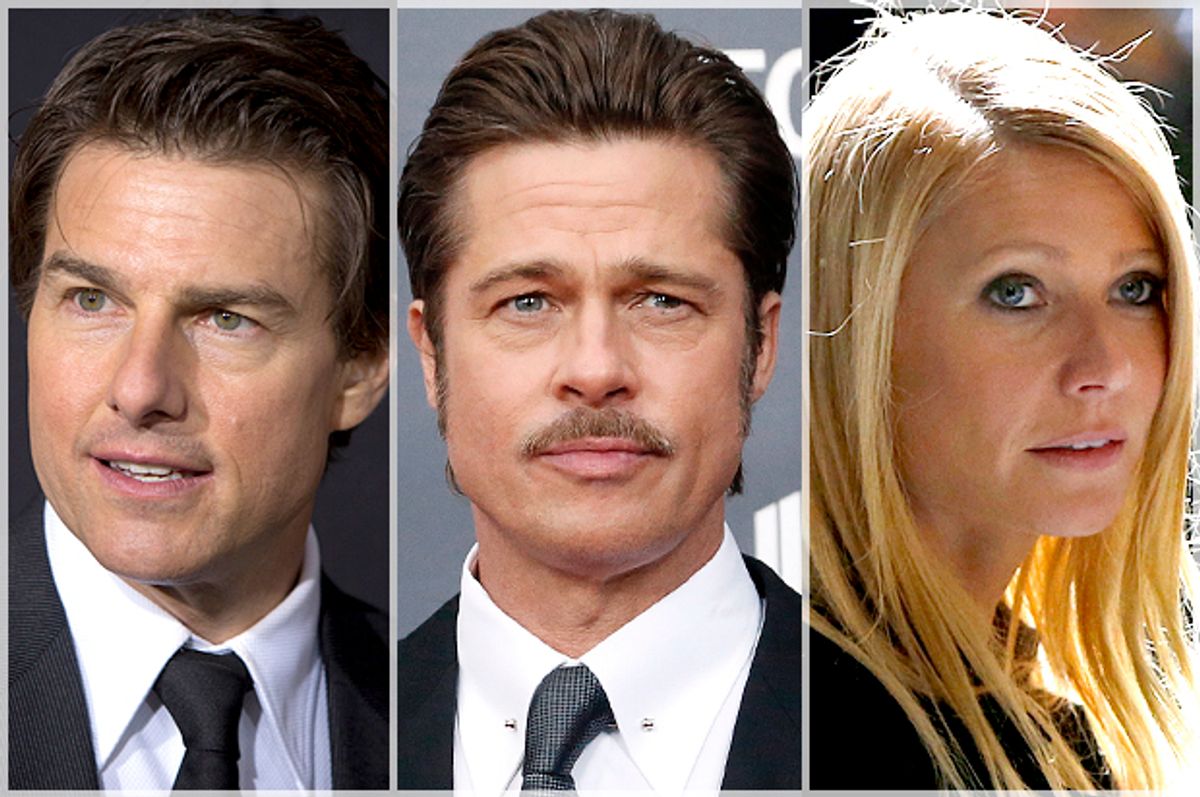 In every happy story there is always an unseen victim, someone who gets rained on by everyone else’s silver lining. You might think that the news for primetime TV in 2015 can only be good--audiences are celebrating the wave of smart programming with diverse ensembles both in front of and behind the camera.

And far from having to make some virtuous financial sacrifice at the altar of diversity, the network suits are cleaning up. Over-the-air primetime TV has never felt more vibrant or relevant, even as “alternative” streaming platforms continue to thrive. "Empire" has shattered records and reclaimed the eyeballs of the Twitter commentariat from “prestige” cable channels.

But here comes Deadline, telling us who’s being victimized by all this: White actors. Hardworking white actors without star power who now have to compete for an ever-shrinking number of audition slots as more and more roles are designated “ethnic,” a term Deadline’s Nellie Andreeva uses so often it starts to not sound like a word anymore.

Now, there’s already more than enough people piling on Andreeva over an article I’m sure she now deeply regrets writing--most of them more qualified to talk about it than I am. (Shonda Rhimes, whose entire career was basically being subtweeted in that article, showed much more restraint than I would have.)

But I have to admit, some of my best friends are white actors, and every actor gets frustrated trying to “make it” regardless of issues of structural inequity. It is, admittedly, difficult for me to empathize with actors who just now, in 2015, getting mad that roles are “designated” as not for them. Asian actors generally understand that no roles will ever be “designated” for them except for that one time they’re doing a production of "Rashomon" and every Asian in the city shows up for auditions all at once (a harrowing experience).

But I can understand how a white actor looking at "Empire" might think about taking Chris Rock up on his offer to trade places if it meant getting the chance to cameo as some long-lost Lyon relative. Since that’s unlikely to happen, here’s the next best thing--patronizing advice from an Asian guy in an opinion column! (Admittedly I have no experience being a white actor, but I’ve watched white actors my whole life, and so I feel about as qualified to give you all advice as Andreeva was giving advice to casting directors.)

Audition for a period drama

One of the random shows Andreeva brings up to make her point is ABC’s "Broad Squad," a TV movie about women cops in Boston in 1978, and how this show has been “diversified” to add one black role to an otherwise all-white lead cast.

Leaving aside the devastating blow this must have been to whatever deserving white actress was thrown aside for Rutina Wesley, this is notable mainly because this hardly ever happens.

Generally speaking--while I’m basing my thesis on stand-up comics--we all recognize that getting into a time machine as a non-white person would be a dicey proposition. So our period pieces, which are meant to evoke old-timey nostalgia without being “about race” in the uncomfortable way any honest treatment of our history would be “about race”, end up having white casts. This is especially true if it’s a period piece about high-status people wearing gorgeous high-status clothes in high-status surroundings, be it an English estate or a New York advertising firm.

Of course, grim, gritty period pieces about blood and struggle are fine too, as long as the creator doesn’t want to “bring race into” whatever point they want to make about the human condition--as is usually the case. Indeed, period dramas that take place in Europe are a favorite way for showrunners to discuss dark truths about the human condition while avoiding “bringing race into it”, whether they take place in Dark Ages Scandinavia or World War I Russia.

Even purely made-up fantasy worlds will still very likely be all-white if they’re meant to evoke “classic” fantasy, as most of them are--you’ll have to pass up the roles of the vaguely “ethnic” barbarian raiders to non-white actors, sure, but I’m sure you can live with that.

On the off chance that someone does greenlight a period drama that primarily takes place outside Europe, like in, say, medieval China, no worries--there’s virtually no chance they’ll make the series without centering it around a white male lead to give the audience “someone to identify with”, so you’ll still be okay.

Speaking of which, another fallback for white actors is…

Andreeva gives us a long list of projects whose lead actors apparently should’ve been white but “became ethnic” thanks to that darned political correctness gone mad. Fortunately Hollywood isn’t completely under the thumb of “ethnics,” as evidenced by The Slap not casting a single Greek actor for the Apostolou family even though their ethnicity is central to the plot.

But yes, it’s true, one of those little asymmetries is that we can often cast a black actor in a role originally “envisioned” as white and people don’t complain, whereas people get all offended and upset if you take a black role and hand it to a white actor. It’s one of those great indignities white folks have to suffer alongside not having a White History Month or a hashtag about their kids being killed by police officers.

But don’t worry, white actors, there’s still one major non-white race you can steal roles from (when you’re not stealing them from “ethnic” white people because you think no one can tell you’re not Greek)--Asians!

Hard up for a role? Just wait for your bosses to acquire a property from China or Japan, one that likely has a strong Asian fanbase and is rooted in Asian culture, and then decide that to make it “relatable” they need to throw in a white protagonist.

A gonzo Japanese light novel about a callow Japanese teenager and his awkward romance with a fiery American girl? Just make the girl British and the guy American--and have the guy be played by Tom Cruise. (And act surprise when the movie bombs after all the buzz around it is people making fun of Tom Cruise.)

What other white actors haven’t been getting enough work? Well, poor Scarlett Johansson has certainly been hard up for exposure, so let’s toss her a bone by casting her as the lead in Ghost in the Shell, an iconic Japanese franchise whose intricate science-fiction backstory actually depends heavily on being set in Japan.

Or we could start remaking classic Hong Kong action films, like "Enter the Dragon," and toss around the idea of having Scott Adkins stand in for Bruce fucking Lee, if only to underscore the idea that no one, no matter how legendary their name, can’t be replaced by some white dude.

Hey, we could have an iconic Sikh villain (played by a Latino actor) replaced by a white dude who looks and acts nothing at all like the original but does look and act exactly like Benedict Cumberbatch always looks and acts. Indeed, looking and acting just like Benedict Cumberbatch is generally a good strategy for white actors to get cast in everything.

Write, produce and act in something obviously based on your own life

Now, yes, people of color are horning in on this action too, with "Cristela" and "Fresh Off the Boat," though in the latter case doing voiceover for a show that you publicly talk about being disappointed in barely counts.

White people still corner the market on “making your own acting opportunities” in the most literal, thoroughgoing way possible by creating your own show that’s all about yourself, though.

You might even write, direct and act in a deeply self-indulgent TV series about your own millennial angst at the age of 24, becoming the youngest showrunner in history, writing about a version of New York where pretty much everyone looks and sounds like you.

And if people criticize you for this you can--rightly--defend yourself by saying that everyone’s just trying to tell their own stories any way they can, everyone can only tell the stories they know how to tell, and it’s not your fault that you get the opportunity to tell your own story in exquisite detail while other people fight to audition to be someone else’s black best friend or Asian sidekick.

It’s not your fault. It’s just the world we live in.

Which brings us to the last way white actors can find work in Hollywood, and additionally not get yelled at on Twitter in the process...

Yeah, I’ve thrown a lot of shade at white actors in this piece. You know what? Everyone whose name I’ve dropped is a good actor who deserves to be there (yes, even Tom Cruise, who was far more tolerable than usual in Edge of Tomorrow).

I don’t hate Scarlett Johansson--if anything I think that she should’ve turned down "Ghost in the Shell" because I’m tired of seeing her typecast as “hot badass action chick with no emotions” and that’s where that casting feels like it’s heading. I could watch Benedict Cumberbatch chew scenery all day. "Girls" is actually pretty funny, although I would say Louis CK actually is the voice of my generation (despite being 17 years older than me).

You know what, though? For every great white actor there’s also several mediocre white actors and quite a lot of bad white actors, who are all still getting work--simply because the pool for white actors is so large.

I could name several white actors I think are mediocre and am surprised keep getting cast (though I won’t do it here). I simply can’t, when it comes to Asian actors--not because I think Asian actors are more naturally talented but just because there’s so few Asian actors working that if one comes to mind they have to be good. I don’t know the names of any mediocre Asian actors in TV because they don’t get credited--they’re the extras who get the back of their head on screen for two seconds. (As I was in "Captain America: The Winter Soldier," by the way.)

I know for anyone in the trenches fighting to get work it doesn’t feel like white actors have it easy. Nobody feels like they have it easy, especially in a creative field like acting where competition at every level can be cutthroat and your star can rise and fall in the blink of an eye.

But it’s the height of privilege to complain that your piece of the pie is shrinking when other people have barely been able to get crumbs. And it’s even worse to treat the very slow stirrings of change--a handful of “African-American shows,” two “Latin-American shows,” exactly one “Asian-American show”--as some kind of “peak” we have to back away from lest we Go Too Far.

You know what? Even if the “ethnics” invaded Hollywood and the PC Thought Police took over everything and it became Officially Disallowed to buy the rights to an anime and whitewash the lead, I think Scarlett Johansson would still be fine, because she’s gorgeous and talented and losing out on playing a Japanese heroine isn’t going to kill her career.

The big stars will still shine, like they always have, and will shine no less brightly for sharing the limelight with stars from diverse background. Everyone else? Will have to deal with the fact that sometimes you’re one of fifty white guys who shows up for the role of “the white guy” in this movie and another white guy was better than you.

You know, like everyone else has been dealing with, for decades. It sucks sometimes, yeah, but that’s the business.

You get used to it.