Liberals' real nightmare: Why Bob Corker -- not Ted Cruz -- should frighten you

Tea Party grandstanders are too self-defeating to be a "threat" to liberals. Unfortunately, Bob Corker gets this 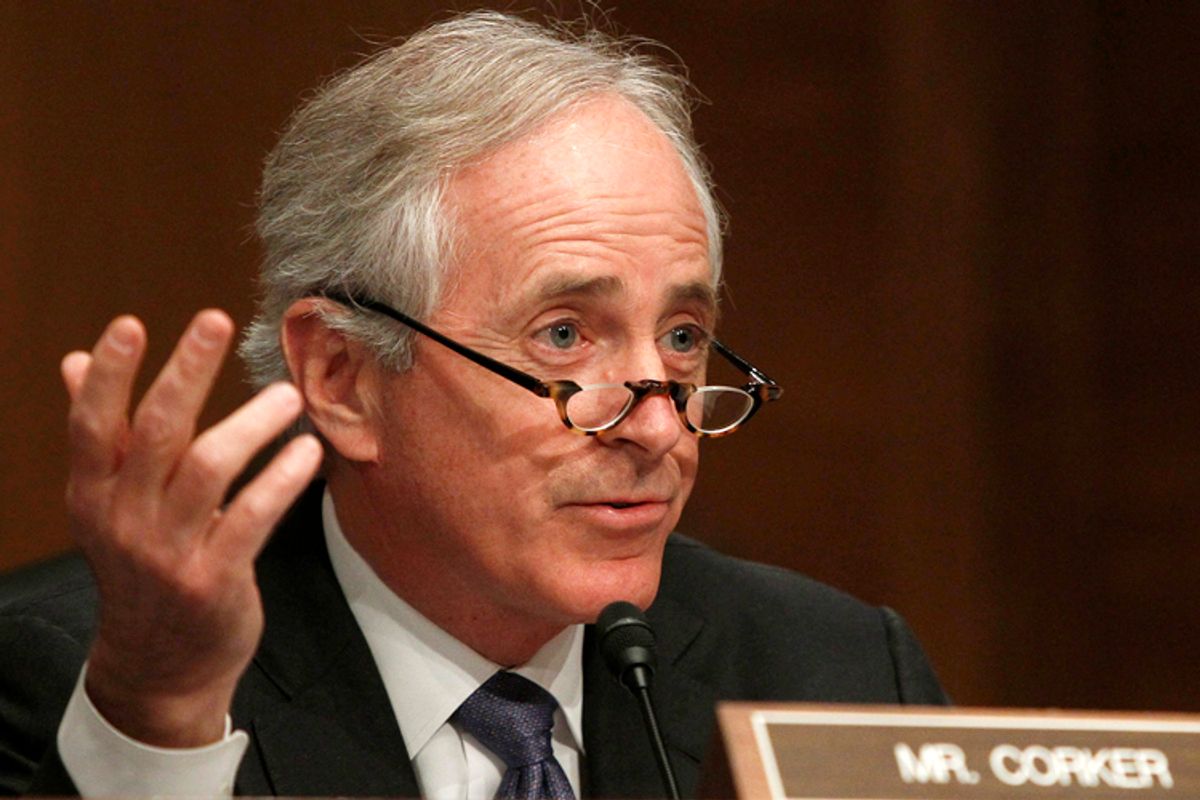 One of the responses we inevitably receive at Salon Dot Com after writing columns about how Tom Cotton and Ted Cruz are self-defeating tactical morons is that we're threatened by them. They scare us and so we get defensive, and write columns!

This isn't really the way it works. Tom Cotton and Ted Cruz would certainly be frightening if they were in actual positions of power. But the whole points of columns like this and this and this is that Ted Cruz and Tom Cotton won't ever attain higher positions of power, because they're possessed by self-aggrandizing instincts that backfire against whatever cause they're hoping to advance. The penchant for marginalization among Real Conservatives is one of the few things liberalism has going for itself these days.

The people who should frighten liberals are the more mild-mannered ones, the non-grandstanders, the ones who are legitimately interested in building support for damaging legislation. The conservatives who aren't tactical morons.

The Republican who Scares Liberals Most shouldn't be Ted Cruz or Tom Cotton. It should be Senator Bob Corker.

Yes, Bob Corker. Bob Corker! But isn't Bob Corker a RINO squish, you say? It's true that he's not a fan of Tea Party budget brinksmanship schemes and doesn't give salacious quotes to the press. He definitely talks to the press, a lot, but mostly about process, how a certain piece of legislation is moving along, and other unsexy, workmanlike things.

That's because Bob Corker actually works on legislation, unlike Tom Cotton or Ted Cruz or Steve King or Louie Gohmert. One of the critical pieces of legislation that he's been working on this year is the bill that would require congressional review of an international diplomatic deal regarding Iran's nuclear program. The Obama administration is seriously concerned about this bill, because if it's up to the Republican Congress to sign off on an Iran deal, then there will not be an Iran deal.

Corker did not sign onto Tom Cotton's infamous letter to Iran because he is smart and games things out in his head before jumping at every shiny article of argle-bargle. He had the foresight -- not that it took a whole lot of foresight! -- to recognize that the letter would simply send "gettable" Democratic votes scurrying away from his congressional review legislation, a Trojan horse that had been heading towards veto-proof majority. It may yet reach that veto-proof majority, but, as Corker explains in an excellent interview with Yahoo! News, the letter -- combined with the Netanyahu speech and Mitch McConnell's aggressive move to fast-track sanctions legislation -- created an atmosphere of "drama" that severely set back the process.

You have legislation requiring congressional review and a vote on approving any Iran nuclear deal, as well as a 60-day period in which the president would not be able to ease U.S. sanctions. Can you get a veto-proof majority for it?

I don’t know. I think we have a really good chance. We’ve been patient, to let some of the drama (subside) … that’s certainly had an effect. I mean, there’s no question that boom, boom, boom. I had a senator come up to me (and say), “Third strike,” just “I’m sorry, third strike.” And no doubt here were numbers of people who were easily gettable, actually in very high positions on their side of the aisle, easily gettable. And I do think the White House has been able to use a narrative of, you know, “Look, this is all about embarrassing the president.” And so we’ve been patient to let some of the drama that’s occurred get into the rearview mirror a little bit more fully.

If Bob Corker's approach prevailed, instead of Ted Cruz's or Tom Cotton's, things would be a lot more "threatening" for liberals. There wouldn't be this "boom, boom, boom" drama that sends "gettable" Democrats back to their senses. Congress may have already overridden a presidential veto and passed into law a bill that would have severely hampered the Obama administration's ability to secure a diplomatic deal with Iran if Corker had just been allowed to do his work and REAL CONSERVATIVES hadn't gotten in the way. This is just one example. Consider all the cuts to Medicare and Social Security that President Obama would have signed off on in his first-term quest for a "Grand Bargain" if Tea Partiers hadn't revolted against some incredibly modest tax increases.

So, no, liberals aren't really threatened by Ted Cruz or Tom Cotton. More amused than anything, because they always opt for tactics that work against their cause. Bob Corker is probably just as conservative as Cruz or Cotton when you get down to it, but unlike them, he devises realistic strategies for achieving his goals and knows how to pick his battles.