Stop the sex-offender registry panic: "A lot of those dots on the map would never hurt your kids" 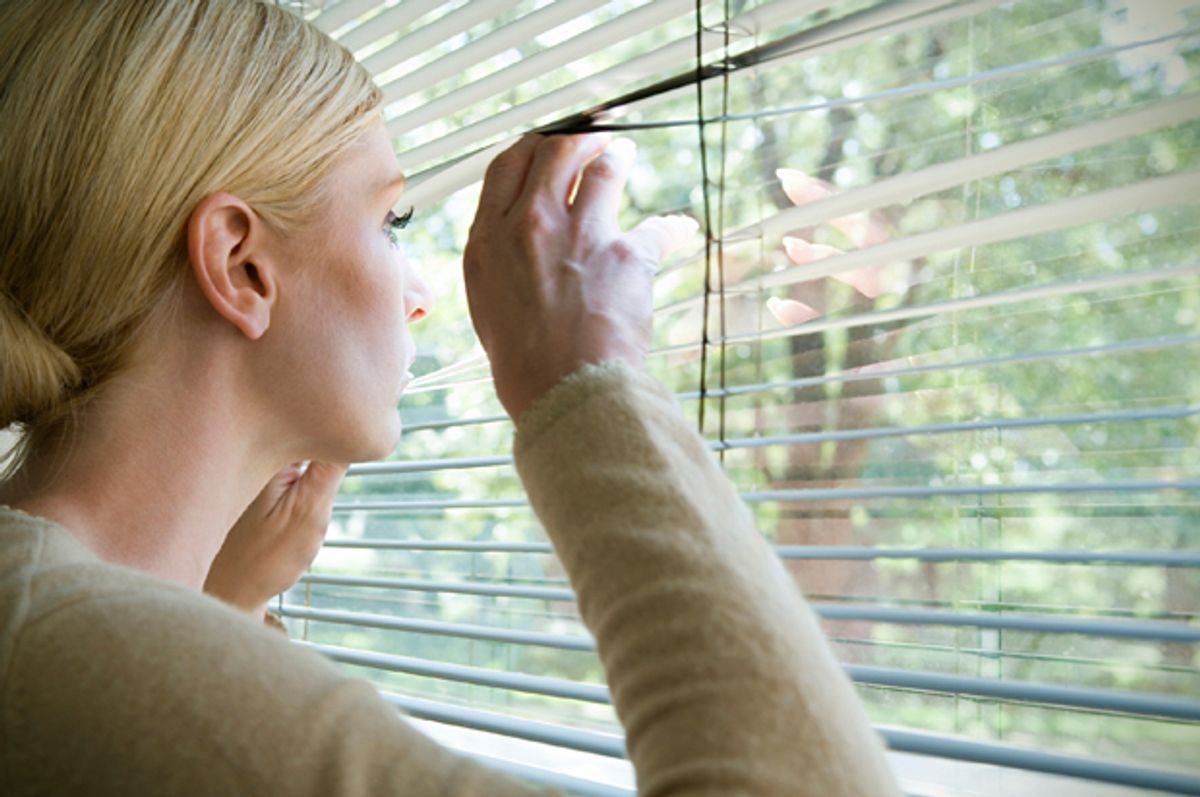 The piece led to an outcry -- she was dubbed “America’s worst mom” -- which, of course, meant that the essay had to become a book: "Free-Range Kids, How to Raise Safe, Self-Reliant Children (Without Going Nuts With Worry).” In the five years since its publication, the book has inspired a movement among parents who want to give their children the freedom to do things like walk home from school alone. It’s a backlash to our age of “helicopter” and “bubble wrap” parenting. (If you suspect these monikers are exaggerations, consider that a Skenazy devotee recently had five police cars arrive at his house after his 10- and 6-year-old were seen walking alone.) Now Skenazy has a show on the Discovery Life channel, “World’s Worst Mom,” which sees her swooping into homes and coaching overprotective parents in a style reminiscent of the ABC reality-TV show “Suppernanny.”

Recently, Skenazy has taken on a new, albeit related, cause: reform of the sex offender registry. Clearly, this lady is not afraid of controversy. On Sunday, she held a “Sex Offender Brunch” at her house to introduce “her friends in the press to her friends on the Registry." One of her guests was Josh Gravens, who at age 12 inappropriately touched his 8-year-old sister and landed on the registry as an adult, and who I interviewed previously for Salon. The materials accompanying her press release contend that the sex offender registry, which was created to “let people identify dangerous individuals nearby...has failed to have any real impact on child safety, and may actually do more harm than good.” She's effectively flinging open the closet door and saying, "See? There's no boogeyman in there" (or, if you will, flipping on the lights to offer assurance that the "monster" in the corner is actually just a lamp that made some mistakes when it was younger and means no harm). This is entirely consistent with her "Free-Range Kids" activism, but she's taking it a step further now, moving beyond just squashing parental fears about stranger danger to helping those who have been unfairly labeled as dangerous strangers.

I spoke with Skenazy by phone about how she found her new cause, why the public registry fails to protect kids and the real risks that "stranger danger" ignores.

How did you arrive at taking up reform of the sex offender registry as a cause?

Well, I'm interested in keeping kids safe and I'm also interested in when our fears don't match reality. That began when I let my son ride the subway and everyone told me, "Don't you watch 'Law & Order'?" I was called "America's worst mom" for trusting him on the subway, even though from my own personal experience, both as a New Yorker and as a reporter, I knew it's really quite safe. So then I started hearing about other things that we worry about that are actually a lot safer than we think -- for instance, in the suburbs, parents are driving their kids to the bus stop. Then I looked up the statistics and it turned out that only between 11 and 13 percent of kids are walking to school anymore -- which, I walked to school when I was a kid. I looked up whether it's really dangerous to wait at the bus stop and, in fact, the No. 1 way that kids die is as passengers in cars. So it seemed strange that we were obsessing about kidnapping and predators and such when the biggest danger to kids is putting them in the car and driving them to the mall.

How did you take up the registry cause, specifically?

I started hearing from some people who were trying to reform the sex offender laws. If you're worrying about sex offenders in your neighborhood, it turns out that many, if not most, do not present a threat to children -- and yet one of the reasons we keep our kids inside is because, if you look at a map and you see some dots, you feel like you're surrounded by people who are going to possibly kidnap or rape your kid. So I started looking into that, remembering that I'm a reporter, and I started finding studies that showed that you could get on the sex offender list for things that didn't scare me for my kids' sake. You could be a sex offender if you go to a prostitute. You could be a sex offender if you urinate in public. You can be a sex offender if you were a high school senior and you had a freshman girlfriend and you graduate and now you're a college freshman and have your sophomore girlfriend and suddenly you're a sex offender, according to the law. Those people don't scare me around my children.

I started hearing what it means to be on the registry and there are all sorts of restrictions that made no sense to me, because they aren't keeping kids any safer. For instance, there was a really interesting study done of Halloween -- there are a lot of restrictions put on sex offenders on Halloween, because somehow we've conflated the idea of sex offender and devil and Halloween and nighttime and children. You're not allowed to dress in a costume, you're not allowed to turn on your lights. In some cities, if you're registered you're required to go to sit at the police station with all the other sex offenders on Halloween, even though a study done of a neighborhood before and after they instituted these laws, found that there was no difference before or after these laws were instituted. In fact, after they looked at all the statistics, they were thinking of calling their paper, "Halloween: The Safest Day of the Year." It's kind of funny, except if it's you or your son on this sex offender list. Suddenly, you're being treated as if you want to rape kids on Halloween, even though you had a girlfriend in high school who was a couple years younger than you and that's what got you on the list.

I don't like hysteria and I love safety. Sometimes hysteria doesn't lead to safety and it leads to cruelty. When you're afraid, you become desperate and don't consult the facts. Like I did with people worrying about letting their kids walk outside or play at the park, now I'm trying to tell people what I found out, which is that a lot of those dots on the sex offender map would never hurt your kids.

So do you want to see the registry done away with or are there specific changes you'd like to see?

I don't think there's any purpose served by the public registry. Beyond that, there needs to be some ability to petition to get off the registry, that somebody would look at [individual cases] and be able to say, "Oh yes, this is a teenager who had a teenage girlfriend, this is not somebody who's going to rape a child, let's not alert the public as if he is." It seems there are some mandatory minimums and I don't think mandatory minimums work for anything. I would rather have judicial discretion.

Josh Gravens, he was put in juvenile prison at age 13 for playing doctor with his sister, and then he served three-and-a-half years and then he got out. He's still on the registry. Recently, he moved -- he moved on a Wednesday and he went to the registry on the following Wednesday to let them know that he'd moved -- he says it's seven days later, they say it's eight days later. If they determine that this was missing a registry date, the mandatory minimum for him to serve in prison is 25 years. That's not making my kids any safer. I have two sons and I don't want them to be thrown in prison if they happen to have a girlfriend who's a couple years younger than they are.

Should parents bother looking at the sex offender registry?

Well, I've looked at it. The problem with looking at the registry is that, for instance, if you're 28 and you did something when you were 12 with an 8-year-old, the age of your victim shown on the registry remains 8, but your age is shown as 28. So you look on the registry as if you're a 28-year-old who molested an 8-year-old. That would get my mind going a lot more than if I knew it was a quote-unquote crime committed by a 12-year-old. So it can make you really nervous. Something like 90 percent or more of crimes against children are committed by people they know. Pointing us toward stranger danger is putting us in the exact opposite direction of where we should go if we are eager to keep our children safe from encountering abuse.

The advice I always give parents is to teach the three R's to their children, which are to recognize that nobody can touch where your bathing suit covers, resist if anybody bothers you or wants to touch you or grab you -- just yell, scream, kick, run -- and then report, "Honey if anybody does anything that bothers you or tries to touch you or just makes you mad, tell me, even if they said not to and I won't be mad at you." Not that it's foolproof, but you're helping to keep the lines of communication open and, of course, silence is the abuser's best friend. If you've already established that there's not going to be silence on these issues, because frankly you're willing to hear them, then I think that you have given your kid a lot more safety than if you just said, "Don't go outside, there's a sex offender five blocks away."