40% of women suffer from sexual dysfunction, with 0 approved drugs — like the 26 available to men — to treat them 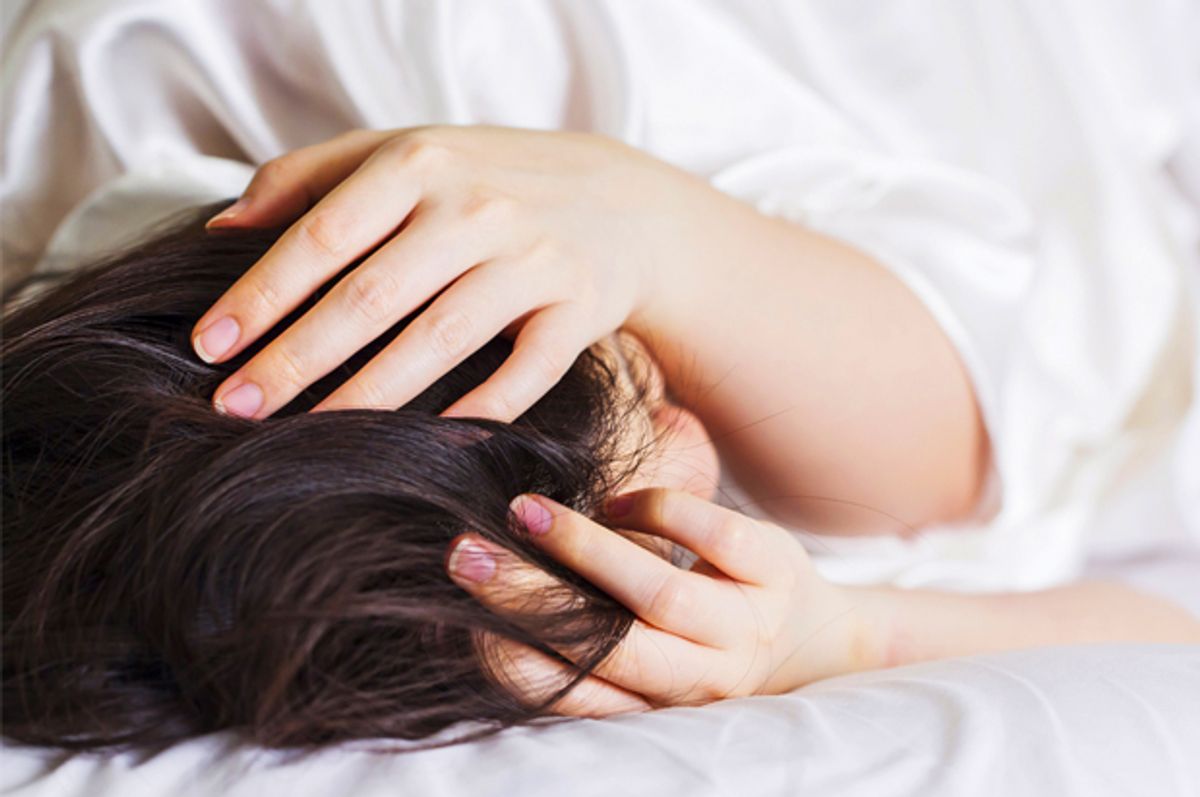 There is a name for what Sarah has, and it’s hypertonic pelvic floor muscle dysfunction. A devastating form of female sexual dysfunction, it causes Sarah such extreme pelvic pain that she can’t sit for long periods of time, much less have pleasurable sex.

But discovering that name was an exhausting process. It took several years of visiting endless gynecologists, nurse practitioners, physical therapists and sex therapists. Those were years of fear, confusion, shame and even a divorce that she correlates with her struggle with sexual dysfunction. Most of all, they were years of pain—both physical and emotional.

“If sex hurts, you’re not going to want to do it, and you’re going to start having a psychological and emotional response to that,” said Sarah, who agreed to be interviewed on the condition that her last name and identifying details would not be published. “So even when you’re able to overcome the medical issues, you still have the emotional and psychological to deal with. If you had addressed the medical issue immediately, those emotional and psychological effects would be significantly downplayed and you’d be able to overcome them much more quickly.”

Sarah’s story is a lot like those of the countless other women who suffer from a form of sexual dysfunction—a staggering estimate of 40 percent of women in the United States, according to a study published in Cardiovascular & Hematological Agents in Medicinal Chemistry in which the disorder is described as any combination of “diminished vaginal lubrication, pain and discomfort upon intercourse, decreased sense of arousal and difficulty in achieving orgasm.”

After a sex therapist told Sarah that she could not even begin to chip away at the emotional trauma if they didn’t take steps to resolve the physical disorder first, she found a gynecologist who prescribed her a testosterone cream, which she must apply daily. This is a very common method of managing symptoms. However, because the FDA has not approved it for women’s use, insurance won’t cover the cost, which comes out to a sum of $90 for a three-month supply. This creates a financial barrier that many women simply cannot afford.

“I had to pay out of pocket,” said Sarah. “So when you actually get a doctor that knows what they’re doing, and they’ll go and do something off-label, they’ll do what they can but there’s no way your insurance is going to cover it.”

Currently, there are 26 FDA-approved medications and devices used to treat erectile dysfunction, according to “Even the Score,” a campaign advocating for the approval of female sexual dysfunction drugs. Their data was collected from the FDA website.

This number stands in harsh contrast to the number of treatments the FDA has approved for women: a total of zero. The accusations of gender discrimination are progressively becoming louder as more and more people demand a cure for female sexual dysfunction, which has reached epidemic proportions.

FDA representatives were asked about the disparity twice for this story, once on the phone and once via email. Both times, they chose to not answer the question directly. Instead, they referred the reporter to the FDA website, where minutes from a public meeting on female sexual dysfunction, which took place on Oct. 27, 2014, can be found.

“We take our roles very seriously,” said Audrey Gassman, Deputy Director of the FDA Division of Bone, Reproductive and Urologic Products, at the public meeting, as stated in the meeting transcript. “We are aware of claims from external sources that the FDA favors therapies in regard to men when it comes to indications related to sexual dysfunction or sexual difficulties. As a representative of the Division and of the FDA I want to assure you that we are willing and ready to work with all sponsors and investigators to address these conditions whether they are in men, women, or both.”

Despite FDA officials’ repeated assurance that the lack of an approved drug has nothing to do with gender discrimination and instead is based on evidence that it works safely, many people remain unconvinced. Dr. Jeff Andrews, a D.C.-based gynecologist who specializes in the treatment of female sexual dysfunction, is one of them.

“The FDA seems more ready to approve certain drugs than other drugs. Their standards for women and girls are very different,” said Andrews.

Andrews sees a large number of women who experience many different kinds of sexual dysfunction. Some, like Sarah, suffer from excruciating vaginal pain, called vulvodynia, or dyspareunia, which is painful sex.

More frequently, they report a lack of interest in sex, difficulty in becoming aroused and inability to achieve orgasm. The physical effects can be miserable enough, but the emotional effects are often far worse. According to Andrews, marital problems are one of the biggest reasons women decide to come to him about their sexual dysfunction.

“It is very upsetting and can cause extreme disruption of a relationship or marriage, and even lead to divorce,” Andrews said. “Patients are very distressed. On the other hand, they’re kind of socially conditioned to keep quiet about it, so it’s not unusual that someone’s been having a problem for years before they actually tell a physician.”

“These poor women—not only are we dealing with it, but then you've got your doctor saying hey, you just need to use more lubricant. They downplay it,” Sarah said of her experiences.

This shouldn’t come as a surprise, considering the lack of attention given to this topic. According to a conversation Sarah had with Dr. Irwin Goldstein, a notable San Diego-based gynecologist who specializes in female sexual dysfunction, he is brought in to guest teach at a medical school for only one specific class session a semester.

“That is all those med students get out of their whole education,” said Sarah. “It’s no wonder that when you go to your OB/GYN they have no idea what to do with you.”

Many people believe female sexual dysfunction is a direct result of depression, anxiety, intimacy issues or a negative relationship with sexuality. Sometimes this is true, in which case symptom management entails therapy, antidepressants or marriage counseling.

But more often than most people would expect, the cause is, in fact, physical. In Sarah’s case, it was the physical disorder that caused the intimacy issues that led to her divorce—not the other way around.

“The emotional and psychological responses to the pain can result in the lack of arousal,” said Sarah. “It infected every aspect of our marriage. It’s such an important way you connect. To have it always be a problem, and not being able to find the right way to address the problem, it undermines the relationship.”

Lisa Topchik knows this story all too well. She’s a sex therapist who works primarily on sexual dysfunction and relationship difficulties—particularly the intersection of the two. The former triggers the latter remarkably often, she says.

Topchik also questions why the FDA has not yet approved a way to treat the disorder.

“I think it’s terribly unfair and unjust,” said Topchik. “It’s like, why haven’t they found a medication that works for morning sickness? The men have been ruling the world of medicine for so long. Hopefully that will change.”

The thing is, effective medicine for female sexual dysfunction does exist—just not in the United States.

“There are some medications available in advanced countries in Europe that we don’t have,” said Andrews, “And so those companies will come back to the FDA and try to get approval for the United States. I definitely think as awareness elevates and people start asking for more, more treatments will develop.”

There has not yet been much reform, although “Even the Score” has been spreading the word about the issue via social media and circulating a petition, found on their website, that calls on the FDA to prioritize the creation and approval of a drug to treat female sexual dysfunction.

“We believe that women have the right to make their own informed choices concerning their sexual health; that gender equality should be the standard in access to sexual dysfunction treatments; and that the approval of safe & effective treatments for low desire should be a priority for the FDA,” reads the petition.

Sarah still has a great deal of healing to do, which she is working on by remaining single and focusing on her own happiness. Still, she feels confident that female sexual dysfunction patients—and everyone—have the power and duty to instigate change.

“It is a cultural shift that we need to see,” said Sarah. “This is an issue, and we need to talk about it, and we all need to have a certain sense of responsibility towards it.”

“The more we talk about it, the better help people will get in the long term.”