FACT CHECK: Myths in the political roar over Common Core 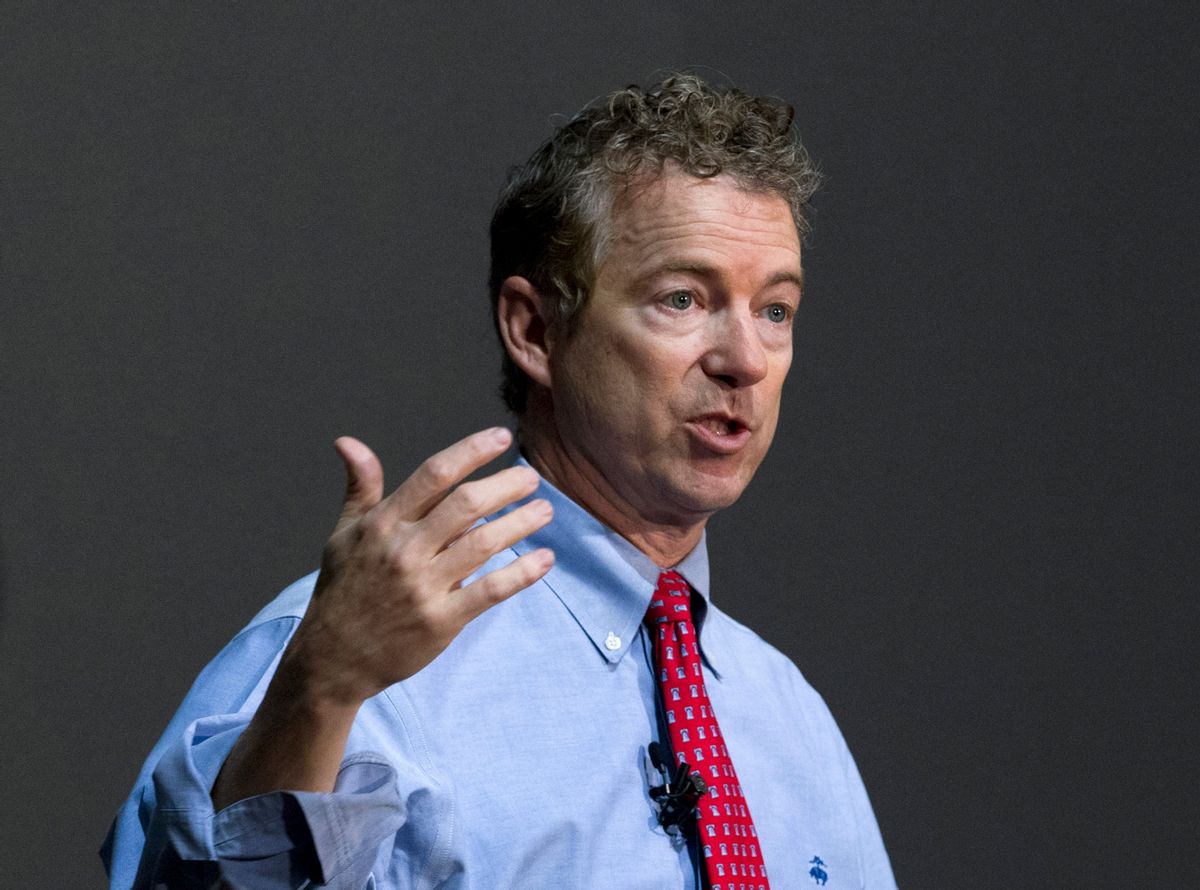 FILE - In this March 13, 2015 file photo Sen. Rand Paul, R-Ky. speaks at Bowie State University in Bowie, Md. In the Republican roar over Common Core, various myths are being peddled as fact. Even so, the 2016 GOP presidential prospects who are criticizing Common Core have a point _ if an overstated one _ when they dispute the notion that it is strictly a voluntary initiative that bubbled up from communities and states. In complicated but unmistakable ways, the federal government does put pressure on states to live up to the standards. (AP Photo/Jose Luis Magana, File) (AP)
--

ATLANTA (AP) — In the political uproar over Common Core, various myths are peddled as fact.

Do the learning standards really mean the federal government is serving as a "national school board," as Sen. Marco Rubio says? That's hard to square with the reality that the standards were developed by governors and state education leaders.

Should leaders "repeal every word of Common Core," as Sen. Ted Cruz demands? Actually there's no federal law — or even federal program — to repeal. Sen. Rand Paul slams "rotten to the core" propaganda forced on children by an initiative that has no curriculum at all.

Even so, the 2016 GOP presidential prospects who are criticizing Common Core have a point — if an overstated one — when they dispute the notion that it is strictly a voluntary initiative that bubbled up from communities and states. In complicated but unmistakable ways, the federal government does pressure states to live up to the standards.

Concerns about Common Core extend beyond the Republican politicians to many parents, some of them Democrats, who blame it for additional math homework headaches and extra time taking tests.

A quick primer on Common Core, followed by a look at the facts behind the rhetoric of some Republican hopefuls:

The effort was developed by governors and state school chiefs from both parties who were concerned that too many graduates were leaving high school unprepared for college or their first jobs.

The standards spell out what reading, math and critical thinking skills students should grasp, while leaving how those skills are mastered up to local school districts and states.

The hope: Higher standards shared across state lines would allow comparable student performance measures and smoother school-to-school transition for children who move, such as military kids. And that could save money, because it's cheaper for states to collaborate in developing standards and associated tests than for each to do its own.

President Barack Obama's administration backed the standards and developed incentives. Primarily, states had to adopt Common Core or similar standards if they wanted to get out of some of the onerous federal requirements of the No Child Left Behind law — which many do. That's the root for the exaggerated, but not baseless, claims about Washington shaping education policy.

CRUZ: Washington "has no business sticking its nose in education. We need to repeal every word of Common Core."

THE FACTS: Common Core is a national initiative, but one that began with states working together. There is no federal law that a new president could ask Congress to repeal.

It was a Republican president, George W. Bush, who pushed a much more direct example of federal involvement with his No Child Left Behind law.

PAUL: Common Core is "anti-American" and "revisionist history that ignores the faith of our founders."

THE FACTS: Common Core is an approach to teaching, not a mandate on what to teach, and it does not come with a required reading list.

For example, the standards specify that "texts need to be selected around topics or themes that generate knowledge and allow students to study these topics or themes in depth." That's the must-do approach and a rather obvious thing to do in classrooms.

That statement is accompanied by a list of classics and historical texts meant to illustrate the quality and complexity of what should be studied but are not required.

The founders and other heroes of U.S. history are on the list: John Adams, Patrick Henry, George Washington and Abraham Lincoln among them.

RUBIO: Common Core "is increasingly being used by the Obama administration to turn the Department of Education into what is effectively a national school board. This effort to coerce states into adhering to national curriculum standards is not the best way to help our children. "

BOBBY JINDAL: Common Core has become "another tool for the federal government to try to dictate curriculum to local schools here in Louisiana."

CHRIS CHRISTIE: "I have grave concerns about the way this has been done, especially the way the Obama administration has tried to implement it through tying federal funding to these things."

THE FACTS: The Florida senator and Louisiana and New Jersey governors, respectively, are voicing common GOP complaints about curriculum coercion. But federal law prohibits the Education Department from spending money to endorse, approve or sanction any curriculum. States can choose what standardized assessment they want. And in states where the standards have been adopted, states and districts are free to choose a curriculum.

Still, there are subtler pressures that both sides of the argument ignore when making their case in too-simple sound bites.

To qualify for some of the billions in grants given to states by the Obama administration's Race to the Top education program, for example, those states had to adopt a "common set of K-12 standards."

Department documents make clear that Common Core standards would suffice for the grants, but added, "Race to the Top does not endorse any particular consortium or set of standards."

In any event, the grants are being phased out.

Indirect ways remain, though, for the Common Core conundrum to hit state budgets.

For example, if a state does not get a waiver from No Child Left Behind and has schools failing those benchmarks, it could be forced to provide tutoring, offer parents a choice of another school or take other expensive steps.

JEB BUSH: "If the federal government wants to play a role in reform, it should stop tying every education dollar to a rule written in Washington, D.C."

THE FACTS: The overwhelming percentage of money for education comes from state and local governments. As for federal dollars for education, as with federal dollars for anything sent to states, rules are involved, at least to try to make sure the money is spent as intended and not wasted. Broad policy goals are inherent in federal money to states. The real question is when support becomes interference.

The former Florida governor is a vigorous supporter of Common Core, unlike his leading GOP rivals. He at times plays to the anti-Washington sentiments of conservatives by emphasizing the state-driven nature of Common Core and his opposition to heavy-handed federal action.

SCOTT WALKER: "I call on the members of the state Legislature ... to repeal Common Core and replace it with standards set by people in Wisconsin. ... I don't want people outside Wisconsin telling us what our standards should be."

THE FACTS: Wisconsin officials adopted Common Core-aligned standards in the first place, without any outsiders dictating.

Local school boards in Wisconsin are the ones to decide whether to adopt the guidelines for themselves.