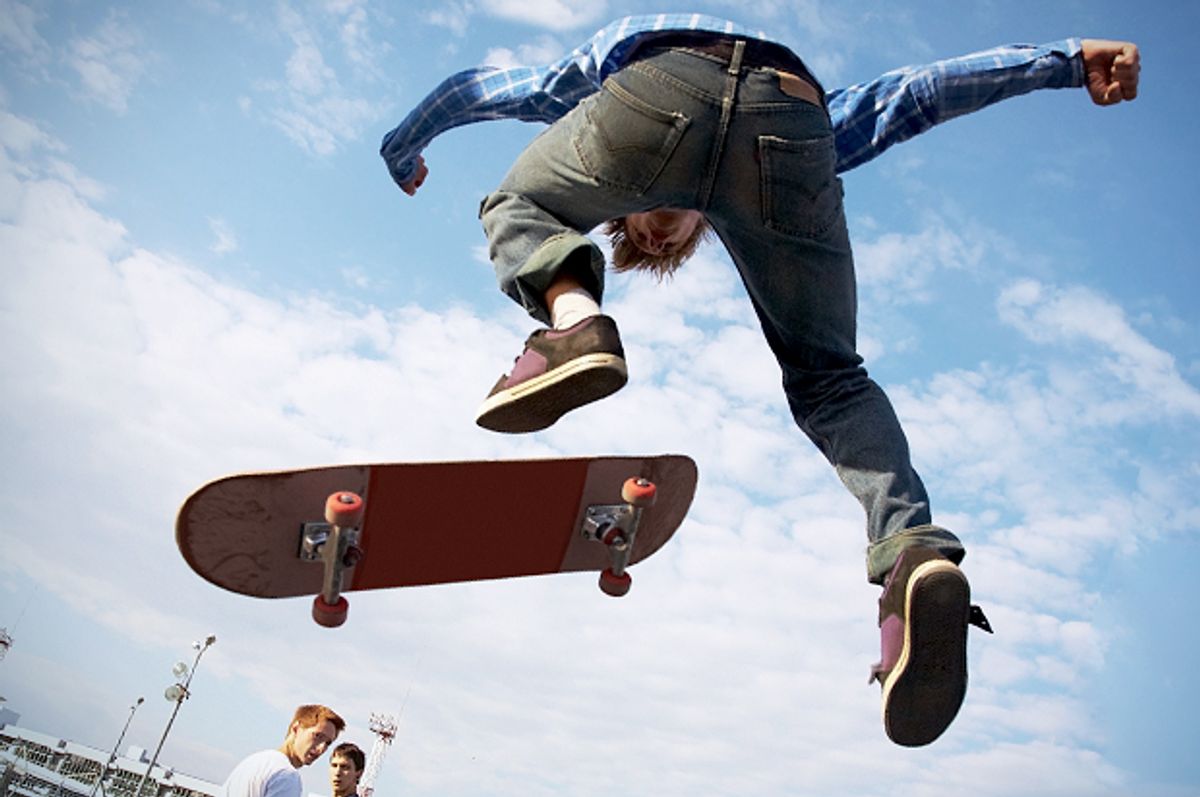 I’ve been skateboarding since I was 11 years old. I even made a meager career of it, getting sponsored and later editing skate magazines. I’m 38 now, my knees creak, my ankles are brittle and I have two kids. But I still keep a skateboard standing sentry near my front door. These days, I’ve only got time for a quick weekly roll while my kids nap. After some ceremonial ollieing of manholes and ducking and diving through traffic, I often gravitate to one of those new skate parks that have gone up everywhere.

Fatigued after running through my dwindling bag of tricks, I sit and watch the kids skateboarding and hanging out. Goofy kids, angry kids, crazy kids, obsessed skateboard prodigies and balance-challenged hacks. Kids alternately clowning each other and then offering reverent fist bumps when somebody lands something utterly jaw-dropping. They always look so familiar, each with that same determined glare that has for so long occupied my own eyes. These, I think to myself, are still my people.

But one thing foreign to me is how they follow each other around with iPhones pinched in their fingers, taking photos and videos in between having a smoke or drinking a coconut water.

While kids may be the same, so much has changed.

The summer of 1988, I was 11. My best friend Chris and I crept into an “audio visual” store for the first time in our lives to rent a video camera. Needless to say, neither of us had ever handled a single item of video recording equipment. Why would we? Video cameras were the domain of Bermuda-shorted dads who stalked their holidaying families, badgering them to sing or dance or at least do something “neat.”

But Chris and I were now both fully enthralled with skateboarding. We’d skate all afternoon and into the night when it was warm. During winter we’d gorge ourselves on illegally dubbed skateboard classics like "Hokus Pokus" and "Streets of Fire," videos shot on shoestring budgets, created by boys like us, filmed in exotic locales like San Francisco or New York. These videos were nothing like the hokey, whitewashed skateboarding we saw in Hollywood movies like "Back to the Future" or "Thrashin’".

Proper skate videos have no lighting or actors or boring plot to obstruct things -- they’re all action shots and rapid-fire clips of hijinks. We loved them because they depicted skaters like us, hurtling through cities or just hanging out, making lewd, indecipherable jokes and doing funny dances and eating bugs for money and bleeding copiously onto the pavement. In short, these videos were as real and random and incredible as our own lives.

Chris and I had decided we just had to make one.

After a $1,200 deposit on my mom’s credit card, we lugged the camera to Chris’s house, set it on his bed and unfastened the case's buckles. The camera was huge. It looked like a VHS player wearing a monocle. It weighed as much as Chris’ 5-year-old brother. Though our rental was for a measly 24 hours, we squandered the first hour figuring out how it worked. Where do you look into? What’s a white balance?

Once we got the hang of it, Chris and I careened into the streets, our cinematic behemoth in tow. We took turns shooting our best skateboard tricks (kick-flipping off a curb, baroque boneless variations), equally excited about landing one as were with capturing a solid fall.

As I performed my first tracking shot of Chris grinding a red curb in the parking lot of a grocery store, I remember marveling at the curb’s gorgeous redness in the camera’s viewfinder. Somehow everything in our crappy, unremarkable town had become magical and interesting, the camera like an extraterrestrial visitor that we were charged with showing around. Its mere presence made everything matter. It made us matter. That day, our lives counted for something -- even though we’d been told in a million implicit ways that they didn’t.

The light was fading, and as far as Chris and I could tell the camera’s battery was dwindling. Knowing we’d have to return it to the store the following morning, I was determined to land one final triumphant trick before returning home to assemble our skate cinema masterpiece. I steered Chris into the parking lot of a nearby Ukrainian church, with a handrail sloping down the set of six stairs out front.

Sliding a handrail was something I’d only witnessed in videos. But my mind was infected with the vision of later that night watching myself perform a miracle. I know now that my meager ollie (that magical jump you see skateboarders perform to vault over or onto things) wasn’t nearly powerful or refined enough to get me up onto a railing safely. Still I instructed Chris to sit at the rail’s bottom. “Whatever you do,” I said gravely, “don’t stop filming.” Before he could convince me otherwise, I paced back from the stairs, clattered down my board and started pushing.

The entire world shrank down to the surface of that handrail. It was a moment of pure, unaccountable delusion, fueled primarily, I believe, by the camera’s extraterrestrial presence. As the lip of the stairs neared my wheels, I cracked the biggest ollie I could muster and managed to hook my wheels at least partially over the handrail, whose steep slope, however, I was in no way balanced to accommodate. Instantly, my board shot out and I toppled backward, arms winging enormous circles. As I felt the handrail rise up and smack me dead in my pre-pubescent crotch, I watched my board tomahawk toward Chris and the camera, where it struck the camera directly in its Cycloptic eye. Dumped to the ground, I spent a moment in an agonized, nauseous fog, before glancing up to find Chris holding the camera, jaw agape, its lens swinging on blue and red wires like a popped-out eyeball.

Both of us nearly in tears, we shoved the camera back into the foam case, hoping that the snugness of the fit would somehow mend it. After limping back to my place, we managed to convince the decimated camera to give up the tape. We arrayed our magnetic bounty on the floor like fishermen dumping out their trawler nets to see what they caught.

Though the destruction of the camera probably meant both my own doom and the financial ruin of my mother, we couldn’t stymie our guffaws as we watched me split-legged on the railing and listened to the crunchy sound my board made when it struck the camera. Immediately Chris rewinded it, and we watched again. Then again.

It was by far the funniest thing we’d ever seen.

After we finished laughing at my crotch-bashing, Chris and I hooked two VCRs together like patients in a blood transfusion. The older skateboarders had versed us on how to edit video without specialized equipment by pausing one VCR and recording on the other. After we’d recorded all the best tricks in a row, including shots of birds and random bystanders and a comic interlude with a homeless guy, we realized it lacked something. The best skate videos had a musical accompaniment to the action, so ours would too. We kept the gravelly skateboarding sounds in the left channel, and recorded the music from my tape player in the right: Public Enemy’s instrumental “Show Em What Ya Got.”

The music’s effect was revelatory. It elevated the images, transformed them, rendered them sacred. Even my ridiculous nut-shot seemed charged with meaning and pathos. In an almost spooky coincidence, the song ended precisely with the last shot of my board striking the lens, and when it was done, we stayed up all night and made 10 copies for all our friends. We called it: “The Day the Video Camera Broke.”

It was the most memorable day of my childhood. It’s so easy to forget that we all now have a fully functional film studio riding around in our pockets. Every single day for us is like that electrified day Chris and I spent with our video camera.

Little did Chris and I know, but the following fall, Nov. 26, 1989, a television show that mainly featured fathers getting crotch-shotted by golf balls and babies riding on the backs of dogs would debut: "America’s Funniest Home Videos." Not surprisingly, there was an overrepresentation of skateboarding in these clips -- usually some poor kid just like me or Chris tumbling down some stairs in the mini-malls of America somewhere, which Bob Saget would cap off with his trademark shitty smirk. The immediate and persistent popularity of the show demonstrated our society’s incalculable appetite not only for bearing witness to ridiculous injury, but more importantly, for watching real things happening to real people -- an immediacy video provided like nothing before.

It’s not for me to say whether this culture of easy recording we live in is good or bad. But I think we all owe something to those who paved the way: that golden age of skateboard videos, which I feel shaped our culture in deep ways none of us realize. In a more fair universe, these videos would be celebrated as the great works they are. Visions of the future.

Like YouTube at its best, these videos were wild, irreverent and weirdly beautiful. They gave Chris and I, and a million other outcast kids, a blueprint for our lives when we needed it most. They taught us to seek out cameras, to create, to examine and celebrate our mundane lives, take risks and share our niche experiences with other like-minded kids. How many early connoisseurs of the same videos Chris and I watched went into the arts or advertising or tech? And how did that early exposure shape their ideas of what art could be, of where art could happen, of what copyright was, of what you could say or couldn’t say, and of what people wanted to see? More than you’d think, I bet.

Oh, and Chris and I ended up keeping the camera. The store just never called. After duct-taping the lens back on, we got it working and used it to film ourselves skateboarding for the next five years -- some of the best years of my life. And it was through these videos that I got my first sponsorship by a Californian company. Half of the free skateboards they sent me I gave to Chris.

It seemed only fair.

MICHAEL CHRISTIE received an MFA from the University of British Columbia and is a former professional skateboarder. His first book, The Beggar's Garden, was a finalist for a number of major Canadian prizes and the winner of the City of Vancouver Book Award. He lives with his family on Galiano Island, British Columbia. If I Fall, If I Die is his U.S. debut.