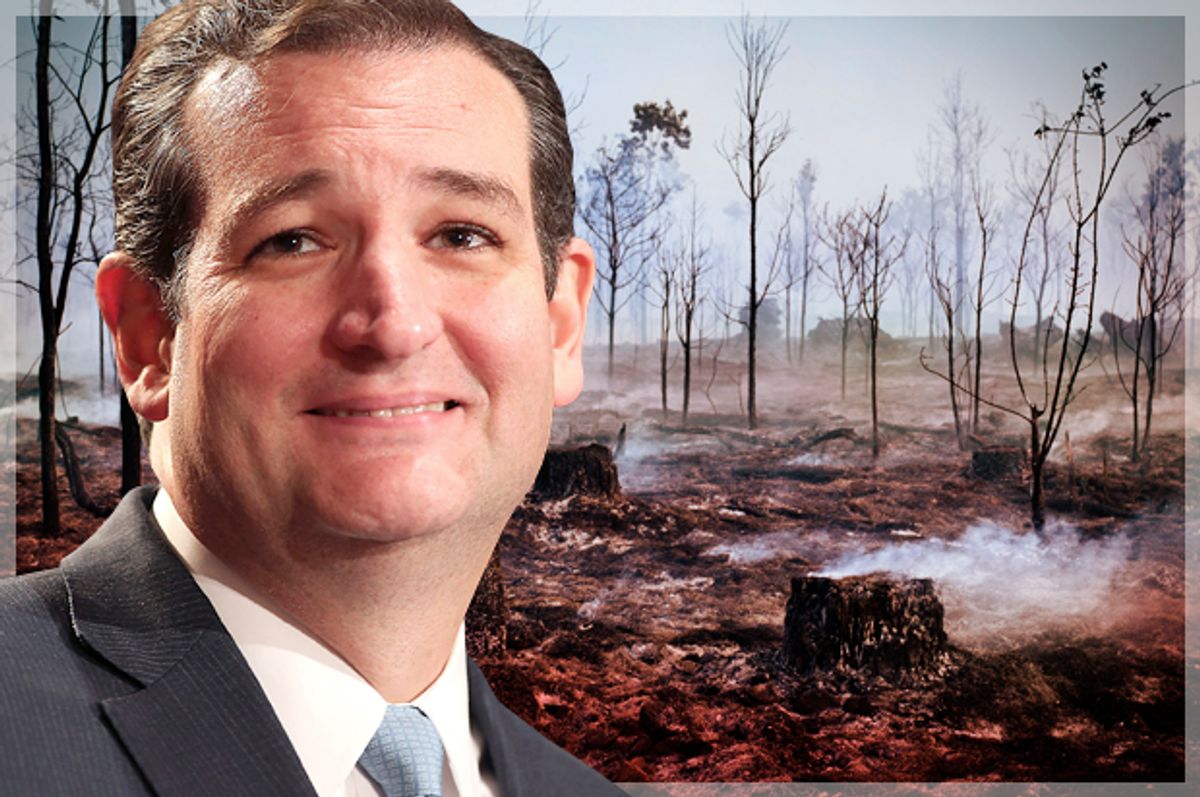 Ted Cruz -- adamantly, and against all logic -- does not believe in climate change. It's an untenable position to hold in 2015, when the world's scientists are more certain than ever that global warming is happening and that we're causing it; when large portions of the country are already suffering the impacts of a changing climate; and when there's an urgent need for immediate and drastic action to reduce greenhouse gas emissions. It's also just hard to imagine a scenario in which a candidate who is not a scientist and yet fancies himself a Galileo could actually win the nation's highest office. His rejection of the basic tenets of science alone should, as Gov. Jerry Brown said last weekend, render him "absolutely unfit" for the presidency.

But let's picture, just for a moment, a bizarro world in which Ted Cruz is president and, taking a cue from him, we no longer have to consider climate change or, for that matter, any potential downside to fossil fuel development. We can actually get a pretty good idea of what that would look like, thanks to the "American Energy Renaissance Act," an omnibus energy bill Cruz introduced last year, and reintroduced just last week, that lays out his vision for a fossil-fueled, regulation-free oil-palooza.

“A Great American Energy Renaissance is at our fingertips,” Cruz said at the Heritage Action for America’s 2014 Conservative Policy Summit. “There is only one thing that will stop us from embracing it to its full potential: the federal government."

Looking over his proposals, it requires only a small leap of the imagination to picture the headlines that would emerge from President Ted Cruz's America...

About 43 percent of oil and 25 percent of natural gas reserves are located on federal land, and Cruz is furious that not all of it is open for drilling. He wants to give states the power to lease, permit and regulate all energy development on federal lands (and waters) within their borders. The 19 million-acre Arctic National Wildlife Refuge would be opened to developers too, as would Native American land -- because, he's explained, "it is only the federal government" that is keeping Native Americans in poverty.

President Cruz gets his Keystone revenge by pre-approving every pipeline, ever.

The decision on whether or not to approve Keystone XL will be made before President Cruz ever takes office, but getting the pipeline built, he's said, is only the beginning of what he envisions for America. As he told the Conservative Policy Summit, "we...need to think bigger than a single pipeline."

"The Keystone saga imposed by the federal government," his bill explains, "demonstrates the need to reform the process of approving oil and natural gas pipelines," removing barriers to the development of all cross-border energy infrastructure. “The Canadians won’t leave the oil sands unmolested," Cruz further explained -- and he'd be loathe to miss out on the action.

President Cruz: The fracking industry knows what it's doing and states totally have it handled.

Last week, the Obama administration finally introduced some regulations for fracking operations on federal lands -- a small yet significant act, in that it could begin to hold the industry responsible for the environmental and public health impacts of fracking.

Unsurprisingly, Ted Cruz doesn't think those are at all necessary.

"States have proven they can oversee hydraulic fracturing in a responsible, safe manner," the most recent version of his bill reads, in one of its more drastic departures from reality. Any intervention from the federal government will kill the American Energy Renaissance dead.

"I couldn't care less about some 'international climate agreement'": President Cruz strips EPA of its ability to regulate greenhouse gases.

Yep, this is an actual thing Cruz would like to see happen: He'd strip the EPA of its mandate, awarded to it by the Supreme Court in 2007, to regulate climate change-causing emissions -- elevated quantities of which, the agency determined two years later, threaten “current and future generations.” He would, predictably enough, undo the efforts the EPA's already undertaken to regulate emissions from coal-fired power plants; in the future, any regulation that could possibly harm jobs would have to go through Congress and be signed into law by the president. Assuming, optimistically, that the world pulls itself together and agrees a climate pact in Paris at the end of this year, this would likely mean going back on whatever commitment the United States ends up making. (This wouldn't be a problem for Cruz, of course, because in his world, the science, evidence and data all say that global warming isn't real anyway.)

President Cruz blesses the world with the gift of fossil fuels.

Cruz doesn't want America to keep its unfettered fossil fuel production to itself -- he wants to streamline the permitting process for liquefied natural gas (LNG) exports, end the ban on crude oil exports and remove "excessive environmental reviews" for coal export terminals. It's an important priority that would allow the entire world to have more of a hand in destroying the climate.

Ted Cruz is one of the few politicians to have freely admitted that he opposes putting any cap on campaign contributions. If he succeeded in lifting all limits on direct political contributions, there's no telling how far his biggest supporters -- the gas and oil industry and a Koch-backed advocacy group -- could take him.

The America of the future?

Fortunately for all of us, Cruz's candidacy is, at best, a long shot. But his politics serve as a useful worst-case scenario for what could happen should we fail to address and instead exacerbate our dependency on fossil fuels: more oil train explosions and pipeline leaks, heightened risks to our coasts from offshore drilling and the near-inevitability of a disaster in the Arctic and poisoned air, soil and water, not least to mention the mega-droughts, monster storms and other extreme weather events that will characterize an America hit increasingly hard by the effects of climate change. An energy policy like Cruz's could, to the incredibly uninitiated, indeed be great for the country -- but knowing what we do of its consequences, we can only call it what it is: a disaster in the making.