The rich's Scott Walker bungle: Why plutocrats fell for the wrong GOP governor

The Wisconsin governor smashed unions and shredded the safety net, so his many stumbles have been forgiven – so far 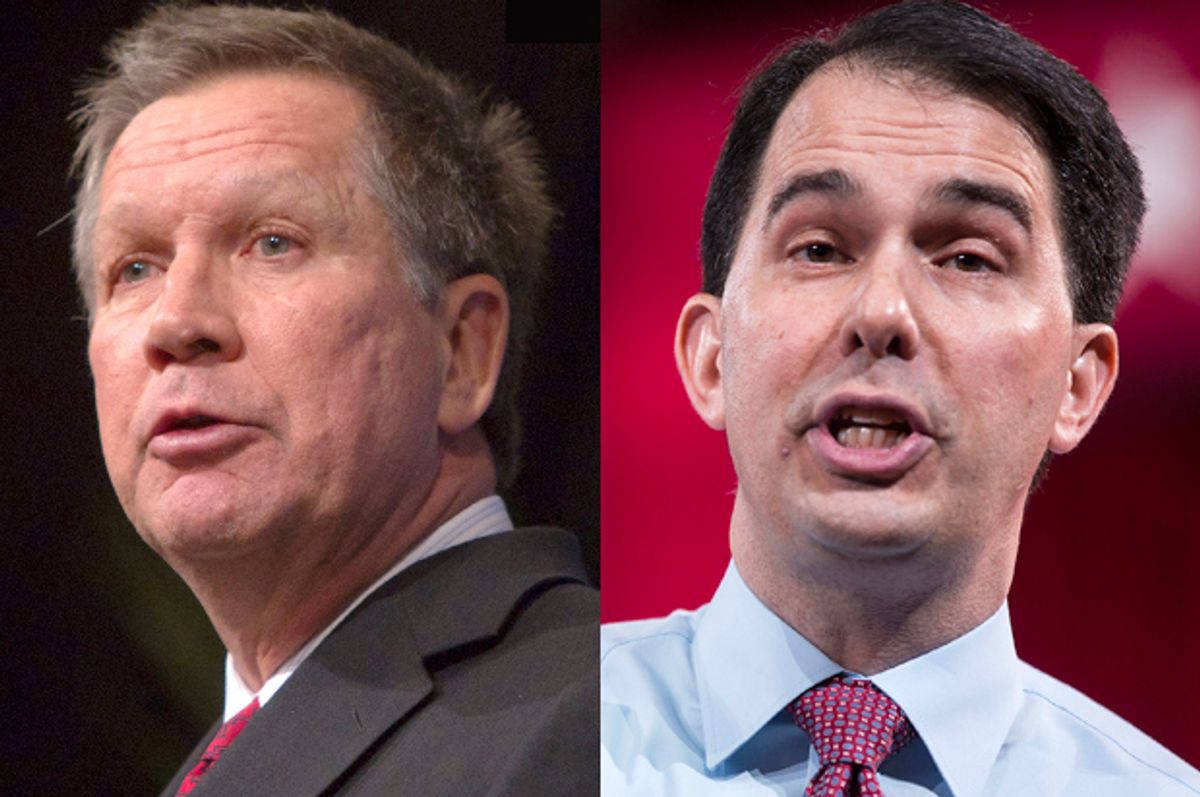 I wrote Tuesday about the way Jeb Bush is sucking the air out of the so-called moderate wing of the GOP, smothering the potential candidacy of people like Ohio Gov. John Kasich (at least for now). It’s also worth looking at the way Wisconsin’s Scott Walker is crowding out Kasich.

Just like Kasich is an actual reformist conservative who blends traditional GOP tax and budget cutting with maverick stands like expanding Medicaid and criminal justice reform – compared with supposedly reformist Bush, whose economic program consists of warmed over supply side policies – Kasich is what Scott Walker pretends to be: A practical Midwestern governor of a hugely important swing state with a track record of governing.

Kasich’s state is also rebounding well from the recession, while Walker’s is last in Midwestern job creation and first in the nation in middle-class wage decline. So why is Walker still considered Bush’s top primary challenger, especially for the donor class, while Kasich can’t get started?

There’s an important glimpse of an answer in this dispatch from a Kasich meeting with big New York donors. This is the group, by the way, that hosted Walker in February, though the gathering was hijacked by Rudy Giuliani insisting President Obama doesn’t love America. Luckily for Kasich – or maybe not – Giuliani didn’t upstage him.

But Kasich left the crowd unwowed anyway, says the National Review’s Eliana Johnson, who also wrote an influential piece about growing GOP worries about Walker this week. Johnson is well-sourced when it comes to monied Republicans’ concerns about Walker’s stumbles, so it’s interesting to see her explain why this group isn’t excited about Kasich.

Apparently Kasich turned them off with his “prickly” answer to a question from conservative intellectual powerhouse Avik Roy, about whether he wants to repeal Obamacare yet maintain its expansion of Medicaid. When pushed, Kasich defended Medicaid recipients: “Maybe you think we should put them in prison. I don’t. I don’t think that’s a conservative position. Because the reality is, if you don’t treat the drug addicted and the mentally ill and the working poor, you’re gonna have them and they’re gonna be a big cost to society.”

Another turn-off for the big New York money guys? “He also talked about the need for a renewed bipartisan spirit on both sides of the aisle, citing Ronald Reagan and Tip O’Neill, and Jack Kemp and Charlie Rangel, as models for contemporary lawmakers to emulate,” Johnson reports. She concludes: “At the dinner’s close, there was little appetite for a Kasich presidency among those who’d assembled to hear him.”

Johnson does note that Kasich is “the governor of a swing state with a strong record of achievement who has been a part of the Republican sweep of the Midwest” who also “eliminated an $8 billion deficit without raising taxes.” But none of that seemed to matter to these “pro-growth” conservatives.

It made me think about why the bumbling Walker inspires such passion from the donor class: It’s that he decimated public sector unions, is trying to do the same to private sector unions with “Right to Work”, while slashing holes in Wisconsin’s safety net by cutting Badgercare and rejecting Medicaid expansion. So his lackluster record, his state’s struggling economy and his stumbling campaign can be forgiven – to a point.

Meanwhile Kasich, the two-term Midwestern governor of a crucial swing state, who is presiding over a rebounding economy and has made innovative policy choices (while cutting taxes) can't get any donor love, because he compromised with the state’s unions -- admittedly after voters repealed his anti-union measures -- and expanded Medicaid.

To recap: Walker is stumbling, Bush is widely viewed as a vulnerable frontrunner and Ted Cruz is running for president of the he-man Obama haters club and scaring GOP pragmatists. It’s clearly time for a fresher face, and some journalists think it could be Kasich. Yet his refusal to apologize for expanding Medicaid or participate in bashing the poor makes him unacceptable to many in the donor class. The contrast really helps you see what matters most to our 21st century plutocrats.