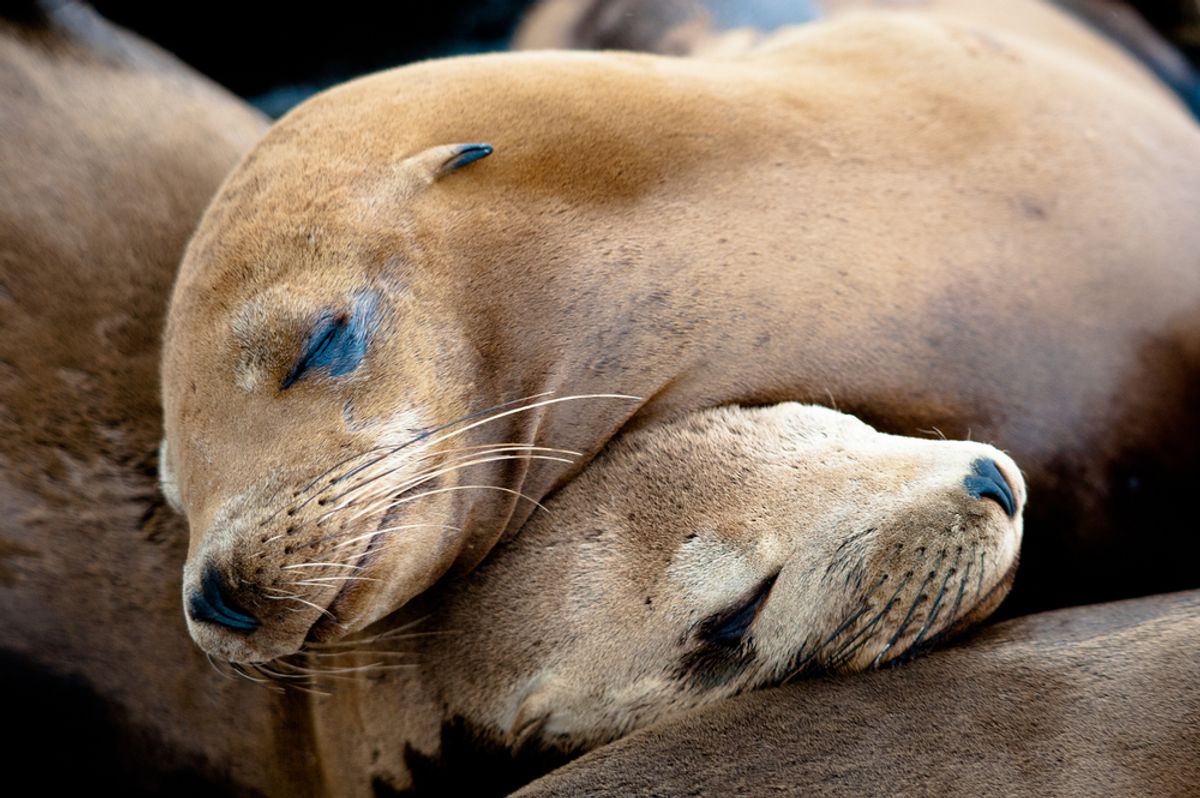 This year’s slew of hungry pups washing ashore in California, which has generated a slew of media coverage replete with heart-tugging images, has roots in natural temperature fluctuations in the ocean. But in the coming decades, human-induced warming could make these types of conditions more common. And sea lion pups are just the tip of a larger shift in the Pacific and the rest of the world’s oceans if human emissions continue to warm the planet.

In recent weeks, emaciated young sea lions have been washing up on California beaches (though a few healthy ones have also shown up, including one who got to hang ten with a local surfer). Roughly 1,800 stranded pups have been found on California beaches through the first two-and-a-half months of 2015. That’s well above the 100 or so that usually turn up through the end of March and “at least as high as anything in the historical record,” according to Nate Mantua, a scientist at the Southwest Fisheries Science Center in La Jolla, Calif.

In 2013 and 2014, large numbers of disheveled sea lion pups were also stranded on California’s beaches, though not at the same levels as this year.

One of the main causes has been the unusual and in some cases, record setting—warm water off the West Coast of the U.S. and stretching all the way to the Gulf of Alaska. The warm water is less rich in nutrients and the types of microscopic organisms and fish upon which sea lions usually feed. That has forced sea lion moms and pups alike to forage further for food, a tiring proposition for young sea lions.

While the sea lions have been the face of the recent intrusion of warm water, ecosystem disruptions are visible throughout the stretch of the eastern Pacific and Gulf of Alaska. Cold water copepods—small crustaceans at the base of the food chain—populations have dropped off sharply in the past year, while their warm water (less nutritious) brethren have shown up in huge quantities.

Further up the food chain, skipjack tuna have turned up in Alaska, thousands of miles beyond their usual range and Mantua said, “sportfish like marlin—things people travel to fish for in Baja—they’re catching them for day trips in southern California.”

Beyond the recent slew of strange sightings, Mantua warned that the impacts will linger over at least the next 2-3 years even if waters cool. He said juvenile salmon that have headed to sea are finding less hospitable waters, lowering their survival rates and reducing catches when they spawn back upriver.

West Coast commercial fisheries, including Alaska, brought in $2.7 billion in 2013, roughly half of the U.S. total that year. All these species shifts are likely to have ripple effects on local coastal communities that rely on them for livelihoods.

“Fisheries, they’ve already seen it,” Mantua said, though the exact economic impacts have yet to be quantified.

The warm water in the eastern Pacific over the past two years is a harbinger of things to come for the region. Ocean temperatures have been rising around the world and are expected to keep warming, and the eastern Pacific could see the odd conditions of the past two years become commonplace by mid-century. Just how far-reaching the impacts will be and which species will adapt and which will fail to is something scientists are still trying to untangle.

The causes for the current eastern Pacific warm temperatures—what Washington state climatologist Nick Bond has coined "the blob"—are not fully known, but are most likely natural. The blob has spread across an expanse of water 1,000 miles across with above-normal water temperatures running from the surface to as deep as 300 feet.

While human-induced warming is heating seas around the world, Bond said that’s not the main cause for this particular hot spot.

“It’s mostly a fluke of climate variability,” Bond said. “At least part of it can be linked to deep convection in the far western tropical Pacific.”

Mantua said the ridge that has kept California dry has also helped lock warm water into place and spread.

There’s also a chance that the warmth could mark a shift to the positive phase of a climate pattern called the Pacific Decadal Oscillation (PDO). That pattern is characterized by warm water along the West Coast, which would further hurt certain fisheries, particularly salmon in the Northwest. A positive PDO would also likely ramp up global temperatures.

Yet the natural variations behind this warming have researchers like Bond and Mantua paying close attention to what happens to everything from humble plankton to large predators.

“While the causes of the warm waters (today) are not the same as what the causes will be in the 2040s or 2050s, how it plays out in the ecosystems, how it works through the food chain, there may be some real parallels there,” Bond said.

The Pacific Northwest has already shown a willingness and ability to adapt to ocean acidification, which threatened to destroy its oyster industry in the mid-2000s. Despite continuing high rates of acidification in the region, the risks its poses to livelihoods are relatively low compared other parts of the U.S.

The connectedness of the ocean and climate also has scientists looking outside the region for clues of how the future will unfold.

“We know the tropical ocean temperatures in the western Pacific and Indian Oceans have long-term sustained warming trends,” Mantua said, noting that these parts of the ocean will be first to see a global warming signal. “So are they starting to disrupt historical climate patterns because they’re going into new territory? That’s what people are looking at right now.”