My decision to keep my breasts: When Angelina Jolie's choice is different from your own

Faced with the same diagnosis as the star, I took a more conservative path -- and suffered the judgment for it 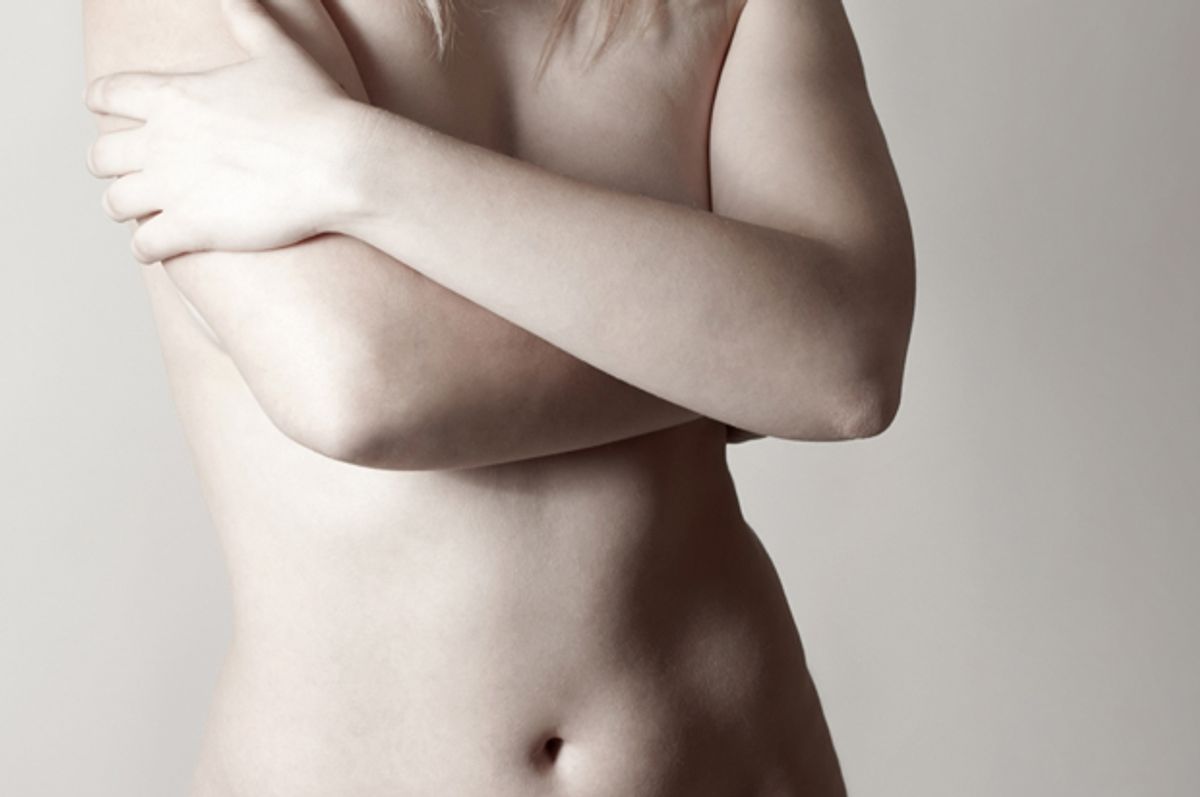 “I’m writing to share medical information no one really welcomes,” began my cousin Gloria’s email. "Knowledge is power, so I hope you receive it in this spirit."

That's how I learned that the BRCA mutation, whose carriers are at great risk for ovarian and breast cancer, runs in my family. Gloria, her half-brother and his two daughters had all tested positive.

This was long before Angelina Jolie announced she’d had first her breasts, then her ovaries and fallopian tubes removed to reduce her BRCA cancer risk. At the time my cousin wrote, I was dimly aware that some women chose this path. But I could not imagine offering up my healthy body to a surgeon who would slice into my flesh like a butcher, cutting out my organs and breasts. It felt like too high a price to improve the odds.

So I did nothing.

Two years later I was diagnosed at age 57 with a rare and aggressive uterine cancer. Its discovery was a fluke; anxiety about a friend’s ovarian cancer had propelled me into my OB-GYN’s office months before my routine visit. Luckily, post-hysterectomy analysis revealed the cancer had not spread.

There were no protocols about chemotherapy for such an early stage. The surgeon advised, “It depends on whether or not you’re the kind of person who likes extra insurance.”

That night, I dreamed a docile lion was outside our house. But we knew it would soon come prowling for red meat. And so I chose chemo.

Given my cancer’s cell type and the family history I had disavowed, the doctors suspected BRCA, and recommended testing. A week later I got the results: positive for the mutation, which meant a 50-85 percent lifetime risk of getting breast cancer.

I felt doomed. The previously abstract dilemma of how to cope with a potential time bomb inside one’s body was now horribly mine. Prophylactic mastectomies—the clinical term I regarded as a euphemism for amputation—could reduce my breast cancer risk by 90 percent. But there was no guarantee. There’d be even less if I chose high-risk surveillance: a long-term commitment that involves frequent breast MRIs, mammograms, self- and clinical breast exams, false positives and anxiety. Unfortunately, surveillance doesn’t prevent cancer; it only reduces the risk of dying from it by catching it early, when it’s highly treatable.

“What a difficult choice,” people said, a few implying that I’d be an idiot if I didn’t choose surgery.

“So, you’re not there yet,” others commented when I’d indicate I was leaning toward surveillance.

It’s as if they believed I hadn’t given my situation a moment’s thought, and would come to my senses as soon as I awoke from my coma of denial. Not everyone disapproved of my decision to keep my breasts, but I magnified the responses of those who did out of fear that I was making the wrong choice. A friend whose BRCA-positive wife opted for prophylactic mastectomies after nearly dying from ovarian cancer treated the question like a no-brainer. “You can live without a lot of body parts,” he assured me.

The prospect of more cancer was a nightmare from which I could not awake. Radical surgery trying to outfox a disease that might never strike seemed an even worse option. I had always loved my breasts. They had been a delectable handful for partners and had nourished two daughters. How could I take away such a vital part of myself unless it was necessary?

I had seen photographs of post-mastectomy women. Character and courage were on display in those pictures, but all I could see was mutilation, made worse by my shame at being unable to overcome my revulsion. I envisioned waking up from the anesthetic, nothing under the bandages except a scarred expanse, my body plundered while unconscious, too late to change my mind.

And what if my husband couldn’t take it? Jonathan listened patiently as I spilled my fears, but he was slow to put his arms around me and promise he wouldn’t leave me. We were so unlike the couples I read about who seemed unburdened by ambivalence and aversion. The men did not even blanch at the prospect of mastectomies, pronouncing their partners beautiful no matter what. The women without breasts but with unfaltering mates seemed just as chipper. I longed to hear of others who feared for the survival of their marriages along with their fears of cancer. But apparently, I was alone, which left me feeling even more depressed and ashamed as well as doubting what I’d once thought of as a strong and loving relationship.

Dread was not the only reason I hesitated to cut off my breasts. Unless I could make peace with a flat, marred chest, I’d face arduous reconstructive surgery. This would involve months of procedures under general anesthesia, pain, skin grafts, permanent loss of sensation, the risk of botched outcomes, and harm to my livelihood.

If I waited, there could be advances in prevention and diagnosis, even gene therapy to mitigate the BRCA risk. Or, should cancer return, safer, more effective treatments; better ways to ameliorate the side effects of chemo and the ordeal of breast removal and reconstruction. In holding out for promising advances, was I holding onto false hope?

At least with my ovaries gone, I no longer needed to worry about deadly ovarian cancer. And since I carried the less-risky variant of the BRCA mutation, my lifetime odds for breast cancer fell on the lower end of the probability scale. Perhaps I’d be among the lucky women who didn’t get it. Reluctant to take drastic action against a possibility, I wanted to be guided by prudence, not denial or paranoia.

High-risk surveillance offered that prudent middle ground between wishful thinking and radical surgery. Yet I dreaded the impending consultation with the high-risk surgeon, certain she would urge me to remove my healthy breasts. That’s what almost everyone seemed to advocate on the message boards I compulsively read. Instead, the surgeon showed me a chart of survival rates among BRCA carriers. True, the numbers forecast only the risk of dying from breast cancer, not getting and surviving it. Still, with my ovaries gone, if I underwent surveillance, my chances of dying from breast cancer by age 80 were about 8 percent. Death rates for BRCA carriers who chose prophylactic mastectomies were only a little lower.

The statistics were reassuring, especially since I had tolerated chemotherapy well and could envision withstanding it a second time if cancer was in my future. For that matter, I could see myself undergoing mastectomies should the disease actually strike. After all, I had chosen a grueling and possibly unnecessary regimen already. But that was for the cancer I had. Not the cancer I might — or might never — have.

To my surprise, the surgeon said most high-risk patients choose surveillance. She added, “If you can’t go a minute without worrying about breast cancer, surgery might be for you. But if you can live with the uncertainty, monitoring is a fine option.”

Prophylactic mastectomies struck me as a way to cut off anxiety as well as risk. But I needed and trusted my anxiety; after all, it’s what led me to my OB-GYN’s office in the first place. I knew my fear could easily find somewhere else to reside. Cancer might too.

So I made my peace with surveillance.

Then Angelina Jolie announced that she had undergone prophylactic mastectomies. Referring to her children in explaining her decision, Jolie wrote, “They know that I love them and will do anything to be with them as long as I can.” A torrent of commentary extolled her selfless courage. Did that mean I was selfish? A coward? Or a bad mother? When another BRCA carrier who chose preventive surgery said, “’It’s not a matter of being brave. It’s a matter of wanting to live,’” I wondered if I had a death wish.

Feeling judged and alone, I began obsessively weeding out baby shoots of invasive scotch broom on our hillside. If I caught the pest early, perhaps it wouldn’t destroy the landscape.

And if I managed my cancer risk, maybe I could save my breasts. Or so I reassured myself as I struggled to regain my footing against the strong current of fear and doubt, both inner and outer.

Soon after, I had dinner with my niece Molly, an oncology nurse. She begged me to consider surgery. “You don’t want to get cancer again. Just let me send you some pictures of reconstructed breasts!” Molly pleaded. I knew she was just trying to help me see beyond the scars, but it didn’t matter. “No thanks,” I told Molly. “Not now.”

After my uterine cancer was diagnosed, I’d asked a nurse if I should get a second opinion regarding chemotherapy. She said that although sometimes valuable, they often left people more confused. “What people really want,” the nurse remarked, “is a crystal ball.”

Maybe. It’s hard to live with uncertainty. But what if we learn more than we can handle? Perhaps we really seek an exemption from suffering and death.

What else do I really want? Years. Grandchildren. A 50th wedding anniversary, or at least a 40th. To see my daughters settled and happy. To get the senior discount at the movie theater, collect Social Security. To accept whatever I decide and however it goes.

Fear about my future does not often consume me. Unless I read an article reassuringly stating that most women needn’t worry about these genetic factors. Then it hits me again that I am no longer most women. Or as the time approaches for my breast MRI every six to 12 months. Then I dream of babies falling, hungry lions on the prowl. So far I have snatched the falling baby from harm’s way, escaped the lions, scared myself awake just in time.

Despite my mounting anxiety beforehand, I find the MRI procedure itself a comfort. The cheerful technician gives me a warm blanket and headphones to block the MRI’s deafening racket. Gliding through the tube face down, I pretend to be lying on the beach in the warm sand, hearing the sounds of machine gun fire in the distance keeping the enemy at bay.

I do not know if I will come to regret choosing surveillance over surgery, or if I will change my mind. Maybe I’ll let my niece send me those pictures of women with reconstructed breasts. But I’m not there yet. I am here now, conscious, courageous. Just like women who choose to go under the knife, those who choose not to, and those who have run out of choices.

Lorrie Goldin is a psychotherapist and writer in the San Francisco Bay Area whose work has appeared in a variety of places. She blogs at http://shrinkrapped.com/.

Lorrie Goldin is a psychotherapist and writer in the San Francisco Bay Area whose work has appeared in a variety of places. She blogs at http://shrinkrapped.com/.