The Daily Caller honcho acts like a pig, while "Duck Dynasty's" Phil Robertson goes off the deep end 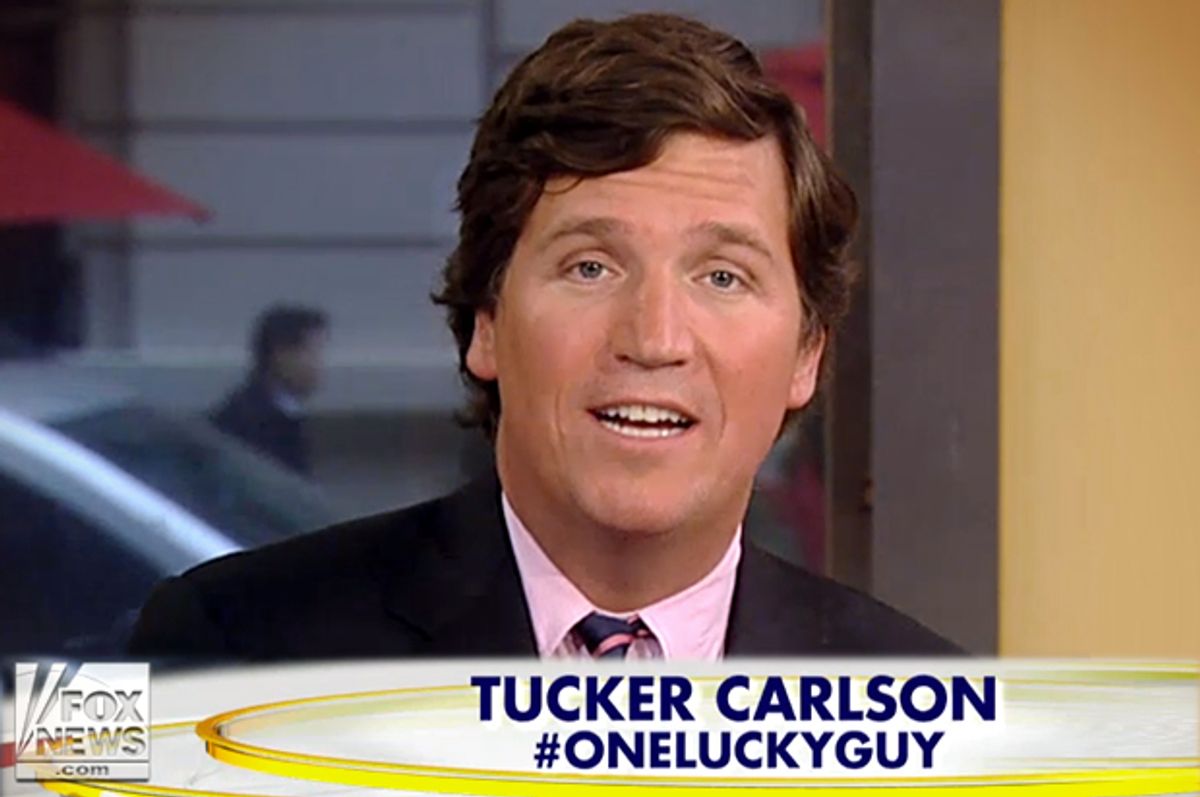 1. Phil Robertson is a deeply disturbed man with a fantasy about beheading atheists.

Apparently, the version of Christianity that ‘Duck Dynasty’ patriarch Phil Robertson believes in is a very bloody, vengeful, sexually sadistic and psychopathic one.

Either that, or the dude is just insane.

The right-wing darling got off this week on spinning out a fantasy involving raping, decapitating and castrating an atheist family during a speech he gave at a Vero Beach Prayer Breakfast.

“I’ll make a bet with you,” Robertson said in that aw shucks folksy way he has. “Two guys break into an atheist’s home. He has a little atheist wife and two little atheist daughters. Two guys break into his home and tie him up in a chair and gag him. And then they take his two daughters in front of him and rape both of them and then shoot them and they take his wife and then decapitate her head off in front of him. And then they can look at him and say, ‘Isn’t it great that I don’t have to worry about being judged? Isn’t it great that there’s nothing wrong with this? There’s no right or wrong, now is it dude?’”

Just a few points: first, he did not make good on that offer of making a bet. Second, decapitating her head off? Third, and yeah, sort of the most important. The definition of atheism is a little off. It’s not believing in God, Sir Duck Commander, not the inability to distinguish between right and wrong.

Robertson’s fantasy continued, we’re going to say, perversely. “Then you take a sharp knife and take his manhood and hold it in front of him and say, ‘Wouldn’t it be something if this [sic] was something wrong with this? But you’re the one who says there is no God, there’s no right, there’s no wrong, so we’re just having fun. We’re sick in the head, have a nice day.’”

Wait, who’s sick in the head?

2. Tucker Carlson and his brother Buckley are even worse than everyone thought.

Tucker and Buckley (yep, that’s his name) Carlson must have one proud mama. At least she can rest easy that she instilled in them a deep respect for women.

In leaked emails from the nasty, smug conservative brother act to a female staffer for New York City Mayor Bill de Blasio this week, Buckley referred to the woman as “Labiaface!"

Hey Buckley, do you talk to your mother with that mouth?

And no points for creativity either. There was a lot of mundane sexism in those emails tool, as well as sophomoric jokes about the woman’s name. The staffer, Amy Spitalnick, had simply reached out to to a writer for Tucker Carlson’s conservative website the Daily Caller asking for a correction to a story. Or as some might call it, doing her job. Things escalated and Tucker jumped in to tell her she was being whiny. Tucker and his brother then engaged in a little backchannel complaining about Spitalnick, accidentally cc-ing her on their e-mails.

Highlight: "Great response," Buckley wrote to Tucker. "Whiny little self-righteous bitch. Appalling? And with such an ironic name, too…Spitalnick? Ironic because you just know she has extreme dick-fright; no chance has this girl ever had a pearl necklace. Spoogeneck? I don’t think so. More like LabiaFace."

While taking part in her state's appropriations debate this week, GOP Arizona State Senator Sylvia Allen made a modest proposal: “Probably we should be debating a bill requiring every American to attend the church of their choice.”

Afterwards, reporters tried to get Allen to elaborate on that idea mashing up church and state. She scrambled away like a cornered animal. Then the next day, back on the state Senate floor, she doubled down, saying that she really did not understand why her suggestion that “America is in a need of a moral rebirth,” and that Americans be “legally required to go to church” was so controversial and “newsworthy.” Back in her day, people had morals and they prayed all the time, and she never even heard of heroin.

And that is why not going to church should be against the law.

4. Mark Levin: Barack Obama should take his seat right next to Hitler.

On his show this week, rabid Conservative radio host Mark Levin initially wondered if he should really express what was in his heart. He wrestled with it, but not for long. Then he decided he just had to say it. It practically burst out of his mouth. “Barack Obama is the greatest threat that Jews face since the 1930’s.”

That’s it. That’s his position, and he’s sorry about having to say it. Wait, no he isn’t. He loved saying it. Barack Obama just loves “arming up this Islamonazis,” Levin said.

No one loves Nazis, of any kind, more than the country’s first black president.

And to everyone else.