The epic theater of "RuPaul's Drag Race": The surprising intellectual rigor behind TV's most campy competition

The televised drag contest serves up radical political metaphors along with wigs, makeup and outsize performances 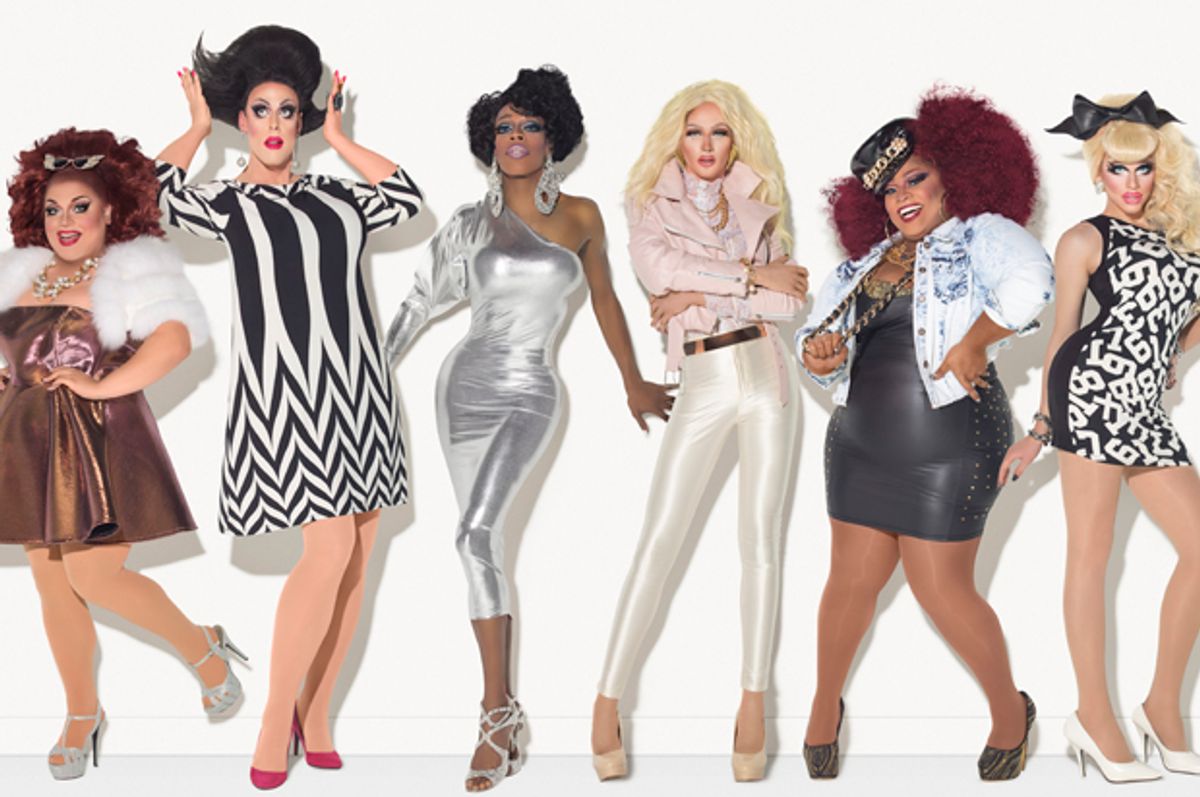 Devoted to artifice, reality-bending theatrical devices and critique of political and social mores, RuPaul and 20th century German dramatist Bertolt Brecht have surprisingly analogous roots. On "RuPaul's Drag Race," every capitalist wink to iTunes and each meta-musical number conjures Brecht's Epic Theatre, teaching that pop culture zeitgeists can be fronts for transformative ideas about society. "Drag Race," and its role in creating more intersectional media, stimulates what Brecht called for nearly a century ago through his V-effekt: "a desire for understanding, a delight in changing reality."

It’s an unlikely alignment — Brecht’s blaring lights, vendetta against forgettable “culinary” theater and radical politics with "Drag Race’s" bitchy hashtag slinging. But Epic Theatre is more playful than its reputation as obscure cerebralism, and RuPaul’s intentions run deeper than Library challenges. Both employ spass (“fun”), social conscience and drama that consistently pits reality against truth. Brecht and RuPaul can both be viewed as critics to sociopolitical barbarity surrounding them, whether Stalinism or the homophobic GOP regime that young, gender-fucking Ru faced.  And in describing progress in visibility the LGBT community made in the early aughts, Season 5’s Honey Mahogany recalls the “We’re just like you!!” mechanism diminished it.  “We sort of shied away from drag, feminine fags, and butch dykes. Even as we fought for the right to be ‘out’ it was still very much about conforming to heteronormative standards.”

One could regard Brecht’s complicated relationship to sexual expression and code switching with sympathy.  As homosexuality was criminalized in Stalin’s East Germany, “he was probably ‘bi’ during the Weimar Republic years and then went very 'straight' under Stalin,” according to Brecht expert and theater historian Mark Ringer. His experience is relevant to contemporary discourse around gender as performative construct and issues of injustice. Twiggy Pucci Garçon, ballroom drag celebrity, youth educator and TRUE COLORS Fund program officer, emphasizes the significance drag, especially ballroom culture, has on LGBTQ youth. Family-based rejection, for example, often leads to homelessness. “Where does one go for life’s basic necessities like shelter, food, water and clothing? For love, support and validation? “ In searching, “a young person can find themselves in risky circumstances like sex work, couch surfing in unsafe homes, drug use and abuse.”  Drag’s chosen families are vital, even lifesaving. Just as wartime cynic Mother Courage packs her loss and livelihood into her giant cart, so do the queens into the workshop: a miscellany of prized possessions. Each individual’s belongings—both sentimental and practical—are vital to survival.

It’s partly drag through which Epic Theatre’s stylized, unnatural aesthetic emerged: Brecht might agree with RuPaul’s assertion, “We're born naked, and the rest is drag.”  After exposure to Chinese theater and female impersonator Mei Lan-Fang in 1935, Brecht wrote "Alienation Effects in Chinese Acting." It’s here that the first clear reference to his major theatrical device, the  Verfremdung effekt  (V-effekt), was made. "In Chinese acting,” Brecht critic Min Tian says, “things are artistically selected, condensed, sublimated, typified, idealized, beautified, and transformed into a work of art.” To Brecht, the finest performer didn’t become his character, he observed it; paramount to the V-effekt’s intention of triggering thought, not feeling, in the spectator. With this essay, Brecht clarified his vision of estrangement.

Drag in Epic Theatre is most famously used as political metaphor: in "The Good Person of Sezuan," prostitute/shopkeeper Shen Te’s drag ensures her survival in a capitalist patriarchy. Drag “is not presented as truly liberating,” says Ringer.  Rather, “the split is literally destroying her, and will do so unless the capitalist system of the play is changed.” Brecht entertained while provoking WWII audiences; today, RuPaul is electrifying mainstream art with serious gender talk. Garçon indexes just a few drag identities in the spectrum, as some performers distinguish drag as “impersonation, some as illusion.” There’s “Drag Queens, Drag Kings, and in the ballroom scene, we say ‘Butch Queen Up In Drags’ [cisgender males who dress as women only to compete in any one of several ball categories]. Some people do drag as a performance, others for competition, and some even as an initiation to transition.” Most exciting to Garçon is the larger conversation about identity, LGBT and otherwise: “What statement does an individual’s 'drag' make to the world?”

Drag Race offers clues, by challenging binaries and spectators’ unconscious bias. RuPaul conducts mini-challenges in traditionally male garb, while her runway duds are flawlessly feminine. Contestants are instructed to “untuck” before final judgments, while confessionals are always out of drag.  Max won the beard challenge with Left Bank-ish facial hair and corseted waist, offering Antique Androgynous Antoinette the following week. Though such friction’s exciting, it’s fraught; TRUE COLORS communications director, Joe Moran, notes how it can awaken bias. Judges “chastised” cis male contestants Milk and Alaska “for portraying male characters in their drag,” and when Monica Beverly Hills came out as transgender, “viewers criticized her online, saying she wasn’t a ‘real drag queen’ because she didn’t identify as a man out of drag.”  RuPaul, however, welcomed Monica and a new dimension to the show. Last season’s controversial “Female or She-male” also exposed prejudice—except here, "Drag Race" itself was villainized. Aside from ‘shemale’s “extremely negative connotations,” Moran observes, the cringe-worthy challenge “focused squarely on identifying ‘real’ women, based on appearance.”  Ru apologized for the slur. Each moment represented our evolving, if difficult, grapple with gender.

While "Drag Race" and Epic take pages from the same handbook politically, they share fun stuff too. The element of gestus is vital, focusing on habits, physical manners and custom (skills Brecht admired in Chaplin). Through combining precise movement, voice and body language with the actor’s notion of character, Brecht investigated differences between “relaxed and loose,” “quick and hurried” and “thought out and elaborate." "Drag Race’s" best contestants examine, then amplify, such variations in human behavior.  And giving good gestus requires full investment; never rely on face, both RuPaul and Brecht insist. Or, as Mahogany puts it: “you could be the most beautiful queen in the world, with flawless makeup and hair,” but without technique and expression, “you’d more than likely lose to someone who looked like a cartoon character performing in a set made of cardboard doing a performance about the perils of pandering to the tech industry.”

Brecht’s “radical separation” of elements is used to, according to Ringer, “avoid lulling the audience into complacency.” This estrangement technique opposed Gesamtkunstwerk, another too-elaborate German word for a simple concept: that all theatrical ingredients must work in harmony to elicit paint-by-numbers feelings. David Barnett summed Gesamtkunstwerk as, “put crudely, a sad scene featur[ing] sad words sung by singers sadly to sad music against sombre lighting."  Brecht railed against such simplistic organization and RuPaul does too, asking the audience to decode contrasting elements of text, performance and technical elements. Ben De La Creme’s Dame Maggie Smith in the Snatch Game was delightfully out of pop culture sync, as well as a nod to Brecht’s use of Historification. And there never was a more memorable, beloved radical separation than Latrice Royale lip-syncing “(You Make Me Feel Like) a Natural Woman” to her unborn child.

"Drag Race" employs Epic Theatre’s requirements that, in order to further our detachment, all technical components be visible. The camera often shoots RuPaul’s welcome to the judges from behind her, exposing set lights and equipment. The Untucked Lounge, once a campy living room theme park, goes even further this season as queens snipe on the deconstructed backstage area. The creative process is equally, often uncomfortably, naked. We witnessed every pancake flat note and Lucian Piane frowny face of “Tan With You” rehearsal, and winced at the blundering  verse during the ShakesQueer practice.  And, as in Epic Theatre, song and a variety of musical styles have significant roles in "Drag Race," whether ridiculous, divine or both. The show subverts old forms (also speaking to Epic’s Historification device) like the '90s hip-hop challenge and “We  Are the World” homage, “Can I Get an Amen?" The song’s heartfelt refrain, “If you can't love yourself, how in the hell you gonna love somebody else?” is disrupted to prevent passive listening: “Just tuck your junk and hit that runway.” And of course, RuPaul’s reverence for Autotune is very Brechtian.

Overall, emphasis on analysis and exaggeration has paid off for contestants offering a little V-effekt. The brilliant Sharon Needles won with a genius grasp of history/Historification, genre and physical technique. Her opening zombie look, all pallid skin and gushing blood, was reminiscent of Artaud’s Theatre of Cruelty.  But her other competition looks, like the latex and plastic surgery addict, and even offscreen ones (the ghoulish Pee Wee Herman, Ouija Board realness and tuxedoed boy drag) are more Brechtian, exhibiting more intellectual rigor. Raja won on radical separations, from wardrobe concepts to her natural, “male” voice. Season 7 is on “glamour toad” Ginger Minj and her precise, hilarious gestus.

Brecht demanded we transform from passive bottoms into active tops, charging “Those Who Come After” to battle the silence surrounding atrocities. Ringer invokes Good Person’s epilogue character, who implored us: "You, the audience, must find the ending for this story."  "Drag Race’s" interplay of illusion and significance might intoxicate Brecht, as the best drag “taps into something people feel passionate about,” says Mahogany. Whether “the Ellis Act housing evictions, Russia’s gay bashings, Black Lives Matter... that’s what takes it over the top and wins.” Epic Theatre is more than mutating dramatic theory. It compels us to battle an inhumane patriarchy, the one preying on women, people of color and the LGBTQ youth Garçon celebrates. Drag Mother Courage RuPaul does the same.