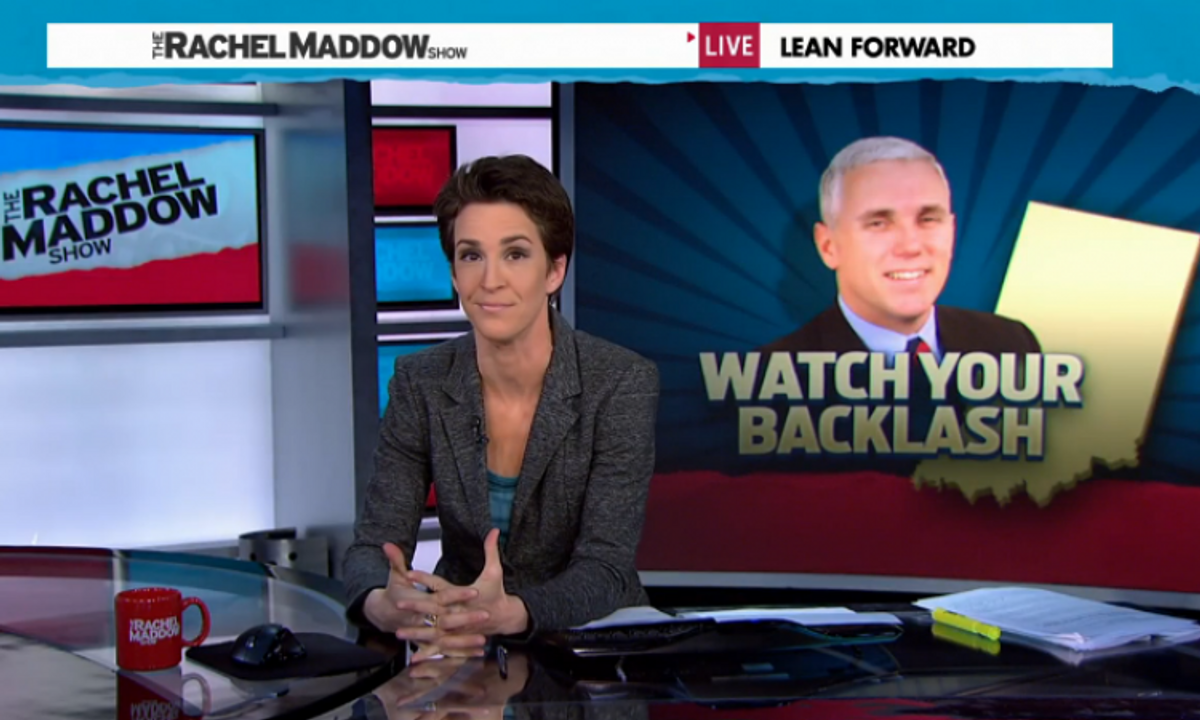 MSNBC host Rachel Maddow eviscerated Indiana Gov. Mike Pence on Monday night over his evasive defense of his state's anti-gay "religious freedom" law, highlighting the Republican governor's repeated refusal to address whether discrimination against gays and lesbians should be legal.

Already under fire from leading corporations and LGBT rights advocates for signing the measure -- which effectively allows businesses and individuals to deny services to LGBT people on religious grounds -- Pence did himself no favors with a floundering appearance Sunday on ABC's "This Week," where host George Stephanopoulos tried no fewer than six times to get Pence to give a simple yes-or-no on whether anti-LGBT discrimination should be allowed in the Hoosier State.

"If you’re wondering why George Stephanopoulos had to keep asking that same question — what was that, six times? — it’s because obviously Mike Pence never answered it. Not like he only partly answered it or he give a very vague or internally contradictory answer. He just literally never even tried to answer it," Maddow said, noting that Pence's appearance was so disastrous that the GOP leaders of the Indiana legislature called their own press conference in an attempt to clarify matters.

Pence did opt for an internally contradictory defense of the law in the Wall Street Journal, where he published an op-ed Tuesday maintaining that the law does not sanction discrimination -- even though it provides a compelling legal defense for those who refuse services to gays.

In the piece, Pence also wrote that if he "saw a restaurant owner refuse to serve a gay couple," he would stop patronizing that restaurant. Given that Pence had used the same op-ed to assert that Indiana's law wouldn't even allow such discrimination in the first place, that promise drew Maddow's mockery.

"So if you were worried that gay people might be refused service by a business in Indiana now, don’t worry! That could never happen, because the state of Indiana has decided to wield the grave threat of depriving individual businesses of Mike Pence’s personal patronage," she snarked. "So clearly nobody will do it, even if it is now legal!"

Watch Maddow tear into Pence below, courtesy of MSNBC: