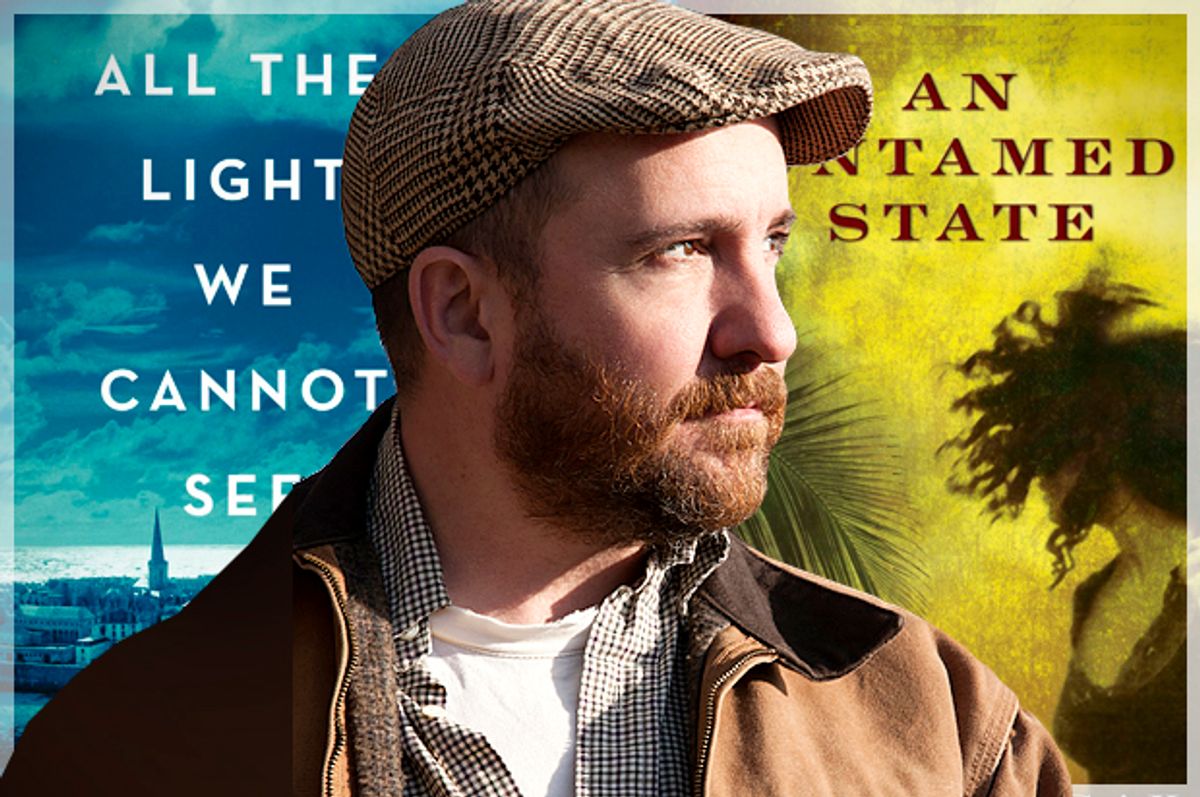 The Tournament of Books — an annual, bracket-based competition for literary fiction hosted by the Morning News website — would not be the fascinating spectacle it is without the occasional upset or scandal. What I’ve always loved best about the TOB is the way it illustrates how differently each of us reads, how even two people who love the same book may love it for radically disparate reasons. It makes sense then, given the organizers’ commitment to enlisting a lively mix of judges, that the occasional wolf slips into the flock.

This year the designated villain is Stephin Merritt, best known as frontman and songwriter for the Magnetic Fields, but also a composer for stage and screen. Each bracket of the Tournament of Books pairs two celebrated titles published the preceding year and asks the judge of that pairing to read both and advance his or her favorite to the next round. The judges explain their choices at length, in findings that range from the tortured to the lackadaisical.

Merritt, asked to pick between Roxane Gay’s “An Untamed State” and Anthony Doerr’s “All the Light We Cannot See,” chose to advance the latter, but his write-up makes it abundantly clear that he didn’t care much for either novel: “I would rather be forced to reread ‘All the Light We Cannot See’ — even if I have to carry it around for another week! — than have to reread ‘An Untamed State.’” He finds Gay’s book “exhaustingly unpleasant” while Doerr’s is merely “sentimental.” His tone throughout is of a wearied, if elegant, shrug of distaste.

This statement produced an uproar. Each judge’s ruling is followed by a mock-sportsmanly “match commentary,” usually by Kevin Guilfoile and John Warner, the tournament’s organizers. “Merritt’s exhausted hand wave over what are obviously good-faith efforts to create art is some combination of irritating and infuriating,” wrote Warner, but despite the plural, the bulk of the commentary defends not “All the Light We Cannot See” (the best-selling literary novel of 2014), but “An Untamed State,” a novel about a Haitian woman who is kidnapped for ransom and gang raped over a period of several days.

I haven’t read either book, so I can’t remark on the discernment of Merritt’s take. While several bystanders have insisted that his judgement is “opinion not criticism,” it’s clear that the irritant isn’t so much what he said as how he said it: exasperated and dismissive, but formidably articulate. Merritt’s a bit scary, decidedly churlish, and not inclined to give the authors the benefit of the doubt. He doesn’t even pay these books the respect of hating them; his disdain is passionless. Guilfoile accuses Merritt of assuming he’s “smarter than the author,” and of being someone who lacks the “generous” mentality of a truly good reader.

Warner and Guilfoile’s indignation does strike me as a shade disingenuous. Merritt is a notoriously gloomy curmudgeon, famous for making interviewers cringe in their sneakers. The New York Times has described him as “misanthropic.” The chances that he would file a piece like this one were very, very high. Reportedly a voracious reader — he was recently spotted scooping up a hefty pile of books from the semi-secret Brazenhead Bookstore on Manhattan’s Upper East Side — Merritt seems purpose-built to apply punishingly high standards to the sort of midlist fiction that the literary world collectively decides to read and talk about in any given year. Generosity per se would go against his grain.

So would the professional courtesy that prevails within literary circles. Along with how Merritt said it, there is perhaps the even bigger problem of who he said it about. As noted above, few of the outraged responses to the decision are rushing to the defense of Doerr. And, as a friend pointed out, had a book by, say, John Grisham received the same treatment at Merritt’s hands, many of the people currently protesting would be chortling with malicious glee instead. Yet who’s to say that Grisham doesn’t work as hard on his books and put as much of his own ego on the line as a literary novelist?

The difference is that Gay is One of Us, a popular figure on the literary scene (as well as, full disclosure, an occasional contributor to Salon), who maintains an active, likable Twitter presence and is by all accounts a lovely person. “Something like a third of our judges thus far have mentioned her in their ‘known connections to this year’s contenders,’” Warner mentioned earlier in the tournament.

Merritt’s remarks clash with how the small, interlinked community of writers who make up the literary world discuss each other’s work publicly. (Privately is another matter!) Concurring that the writer’s life is a hard one, these sharers in its sufferings are expected to support each other when they can and otherwise keep their mouths shut. Chances are, if you pan a novel in the New York Time Book Review, its author will turn up in the next cabin over at Yaddo or begin dating your best friend. Is today’s opportunity to trumpet your unvarnished opinion really worth the professional and personal grief it will lead to down the road?

Merritt’s ruling is uncollegial, a violation of subcultural norms, and has prompted all sorts of wild and pretty much unsupportable ideological accusations, misogyny in particular. The truth is, while Merritt’s statement may be too slapdash to fly as a professional review, it also isn’t a professional review, only the requested expression of a personal preference. Presumably, the TOB brings in musicians to judge rounds because they want to mix things up and reduce the literary world’s tendency toward insularity. Even so, Merritt’s take contains a good deal more detailed and concrete discussion of the texts in question than many tournament judges provide. If it’s opinion rather than criticism, it’s still more criticism than the TOB usually gets.

Gay herself responded with admirable maturity by tweeting that, while Merritt’s ruling was “mean,” she recognizes that “my book isn’t for everyone.” She is correct. Merritt was mean. By comparison, Nicole Cliffe’s choice of “Station Eleven” by Emily St. John Mandel over “A Brief History of Seven Killings” by Marlon James could be condemned as equally arbitrary; she deems the latter novel “too complicated” and “too confusing” and blames “baby-mush-brain” for her inability to comprehend it. (Yet more full disclosure: I thought “Brief History” was by far the best novel of 2015, and gnashed my teeth to see it drop out. I guess it, too, isn’t for everyone.) But Cliffe has a beguiling, self-deprecating and respectful way of framing her preference. She knows how people like us are supposed to talk about books.

Well, it’s not that Merritt doesn’t know. Most likely he just doesn’t care. He’s a civilian, and as such feels no obligation to give an author the benefit of the doubt. As soothing as it is to be swathed in the tactful manners of the literary world, this padding does act to shield writers from the dismal truth that most readers outside our little circle are as unforgiving as Merritt. They’re indifferent to how hard an author worked, what a swell guy he is or how his novel reflects his personal trials. If a book’s prose grates, they don’t have to cut it slack because it deals with an important issue. If they don’t want to read about unpleasant people undergoing awful ordeals, they simply won’t read books with those themes. And — unless they somehow end up as Tournament of Books judges — you can’t make them.

I can’t say I admire Merritt’s takedown of these two novels. I don’t even regard it as reliable advice, although it is — not surprisingly, given his immense talent — well-written. But I can’t be shocked by it, or regard it as aberrant. I can’t pretend that everyone who reads a novel without being compensated for their trouble with cash, attention or membership in a tight-knit community, is required to award extra credit for reasons extraneous to their experience of reading it. Readers owe authors nothing; they are always doing us a great favor by paying attention to what we have to say. Merritt’s ruling is like that gust of icy air that slices through a warm roomful of partiers when a guest opens a door to the winter night. Consider it an unwelcome but sometimes necessary reminder that it’s cold outside.